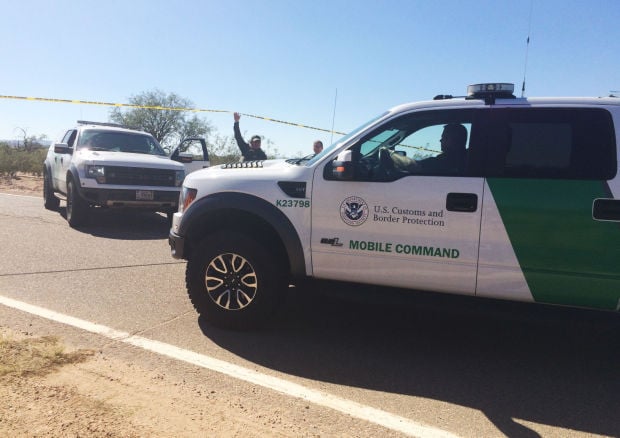 U.S. Customs and Border Protection agents at the scene of a agent-involved shooting Friday south of West Valencia Road near Arizona 86. 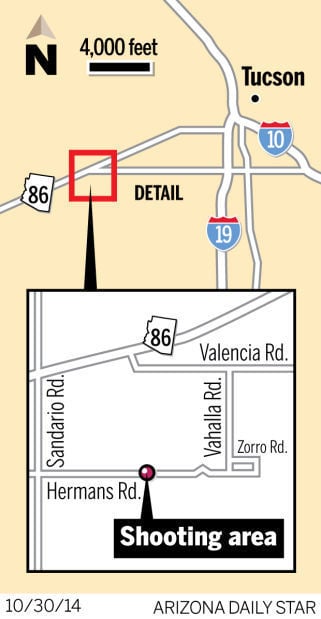 The man shot and killed southwest of Tucson Friday morning by a Border Patrol agent has been identified as 23-year-old Edgar Amaro López.

Amaro López, a Mexico national, died of a single gunshot to the head, data from the Pima County Medical Examiner’s Office show. No other information has been released about the incident.

The FBI, the lead agency in the case, said it is still looking for additional suspects and is investigating the case as an assault on a federal officer.

Mexican Consulate officials in Tucson said in a written statement that their office has been in touch with relatives of Amaro López to offer them assistance and will continue to follow the investigation.

Amaro López was armed with at least a pistol and was wearing a bullet-proof vest and carpet booties — shoe covers with carpet soles to erase footprints — said Jim Calle, an attorney representing the agent who shot Amaro López. The agent has not been identified.

The general area east of West Valencia Road and Arizona 86 near where the shooting happened has become a notorious smuggling route, Calle said, despite there being neighborhoods and a casino nearby.

Two agents were after several men in the area of West Hermans and South Sandario roads on Friday morning when one of the men tried to shoot one of the agents, Sean Chapman, an attorney who is representing the other agent, has said.

“One agent fired his weapon in response to being threatened by the man with a sidearm,” he said. “The other members of the group ran off, and then agents found rifles on the ground in the area.”

This is third fatal shooting of the year involving the Border Patrol.

José Luis Arambula, 31, was shot in the head by a Border Patrol agent on May 30 during a foot chase in Green Valley.

Two agents were chasing Arambula when they said he turned toward them and appeared to be “punching out” — described as a motion someone would make if they were holding a gun with two hands.

And on Jan. 16, a Border Patrol agent shot and killed a 31-year-old Gabriel Sanchez Velazquez, who officials said was hiding under a tree. They said he began to fight with the agent when they agent tried to apprehend him and tried to take his gun.

The agents in those earlier cases were cleared of any wrongdoing.

Vaccine mandates: Are they legal?

Troopers were called to the westbound off-ramp about 8 a.m. and traffic was still moving slow in the area hours after the crash.

U.S. Customs and Border Protection agents at the scene of a agent-involved shooting Friday south of West Valencia Road near Arizona 86.