After 2020 became a year of racial reckoning with the public killing of George Floyd and the protests of injustices against Black people, 2021 offered what can best be described as a follow-up year — a continuation of some familiar story threads with other new ones emerging.

Derek Chauvin, the former police officer who killed Floyd, was convicted of murder. Three men in Georgia were convicted in the killing of Ahmaud Arbery. A white gunman in Atlanta killed eight people, six of Asian descent. The movement to identify and reckon with structural racism rolled forward. And as local and state governments grappled with the removal of statues of racist historical figures, local school boards fought over how to teach the uneasy history of racism in the United States.

Against this backdrop, AP's Race and Ethnicity team tried to capture the story both in sweep and in painstaking detail. Here, some AP journalists from that team involved in the coverage reflect on some of the year's stories and how journalism handles the coverage of race.

I feel as if 2021 was really a continuation of everything that we dealt with in 2020. Race is still the story. It is still that constant through line to a lot of the issues that we have been covering. ... This country right now is at a place where people are demanding that we talk more frankly about the role of structural and systemic racism and how that has led to all of these inequities that really cross over into every single beat that we cover here at AP. So that's been what I've been reflecting on — how racism is at the forefront of all of these issues. And it's not going away anytime soon.

Journalists of color for decades in this country have been trying to bring race and coverage of inequity to the forefront, but it's been a struggle. I don't think that's a secret. And I think that there are still struggles in terms of how to make sure that coverage is equitable, how to make sure that we are centering these voices from communities that have been ignored for so long.

I wrote a story this year about the amount of grief that Black Americans in particular are feeling because of the constant stream of Black Americans dying at the hands of police but also the toll of the dead that we've seen from the pandemic. So paying attention to grief and how people are grappling with all these issues that are impacting them right now. I would also say climate change. I think that looking forward, we're all in some way or another going to be climate reporters because this is a topic that intersects race and inequity — and intersects every single beat that we cover. So I think when we saw the hurricane earlier this year, there was a lot of talk about is this yet another example of how climate and environmental issues are going to have a disparate toll on communities of color.

I firmly believe that race coverage is not a standalone topic. It's not a special interest topic, right? This is the through line in all of the coverage areas that we have in AP as well as other news organizations. So I think we as journalists right now in this moment really need to think about how we can dig deeper. How can we go beyond the breaking news headlines, and really tell robust stories and create robust coverage that moves the conversation forward, but again, you know, stick with the facts and report the truth? I think that is really one of the most important issues facing journalism right now.

What kind of sticks out in my mind is the Gabby Petito case, how it brought back around that whole conversation about missing white woman syndrome. And are we as one of multiple news organizations doing enough to cover the nonwhite victims in those kinds of cases? That's something that I was sort of re examining. I'm glad that I got to help out on the story about that issue, where a few of us went out and tried to find family members of missing persons of color and give them a chance to speak. So I was grateful to be able to do that, and give a couple of families a platform. So that's something that I'm going to try to remember in the future is how can we address those gaps so it's not just the white high-income person who's getting attention.

People think that it's kind of out of the ordinary when somebody who comes from the middle class or higher goes missing mysteriously like that, and especially on something like being able to afford to take a cross-country road trip. That's more a luxury. Whereas people of color who go missing are probably not always from the middle class and they're not doing something glamorous-sounding like taking a road trip. And they don't have a smartphone or have a presence and leave a trail on social media.

I think initially, after the shootings, there was an overwhelming wave of support for the Asian American experience right now in the age of COVID. And you know, it did matter that there were a lot of people who were not Asian speaking out. And yes, it was nice, for a while to see all these people — not Asian as well — who were you know, using the #StopAAPIHate or #StopAsianHate hashtags. And to degree you know, it was nice to see certain companies, corporations, and even small businesses echo those sentiments. But, of course, like anything, I feel like it's kind of petered out somewhat. I mean, even as recently as this month there's an elderly man in Chicago who was shot and killed very viciously in the Chinatown neighborhood there. And I only see outrage among Asian American social media channels or independent Asian American social media platforms like Instagram accounts, Twitter accounts where their mission is to just go and pull out like all Asian American news. But I don't see much outrage beyond that.

As dark and harrowing as some of the news has been, you know, there's been some positive things too. I mean, at the same time that all this is happening, there were a lot of Asian Americans who were really happy by the increase in on-screen representation and also as a chance to escape the darkness of real life. Like, I have to say, "Shang-Chi," the Marvel movie, to some people it's just a comic-book movie but for a lot of people it was a big step in representation in media. ... For a lot of people to see someone who looks like them up on the big screen, being the action hero, was important, although I think we're also ready to see more roles outside of martial arts roles, even if they are very fleshed out and three dimensional.

One thing we will obviously keep an eye on going into this next year is those issues that we know are going to be at the forefront, whether it's voting rights, particularly with the Black and Latino vote, but obviously other groups as well; whether it's looking at law enforcement in have things changed? Are there some signs of reform? Is there any kind of indication or signaling there'll be some progress?

And then of course we will be looking closely at hate crimes, continue to look at health and also looking at education, because another issue that came up this year was the teaching of history, particularly history around slavery, and how the groups of people who make up America came to be here in America. There's push and pull about whether to tell the story particularly to young people, or to protect them from some aspects of it. That push and pull with education is going to continue to be something we see in the next year, particularly as you have local school board races and things like that.

We're definitely talking about race more, and it's definitely more front and center than it has been in decades past. Where we really need to improve is everybody kind of settling down and putting aside their perspective on the race situation and then hearing it from other people's perspectives and assessing all sides. There's so much emotion on both sides. Obviously, there's more than two sides, but on all these different ends of it there's so much emotion involved. That's when things just become more agitated, and politicized and even more divisive. It's messy. It's complicated. But I think people are now more willing to at least address it.

A world ablaze: Top images captured by AP photographers in 2021

The metrics are ugly for many television, digital and print news organizations: after record-setting engagement numbers in 2020, many people are cutting back on news consumption. 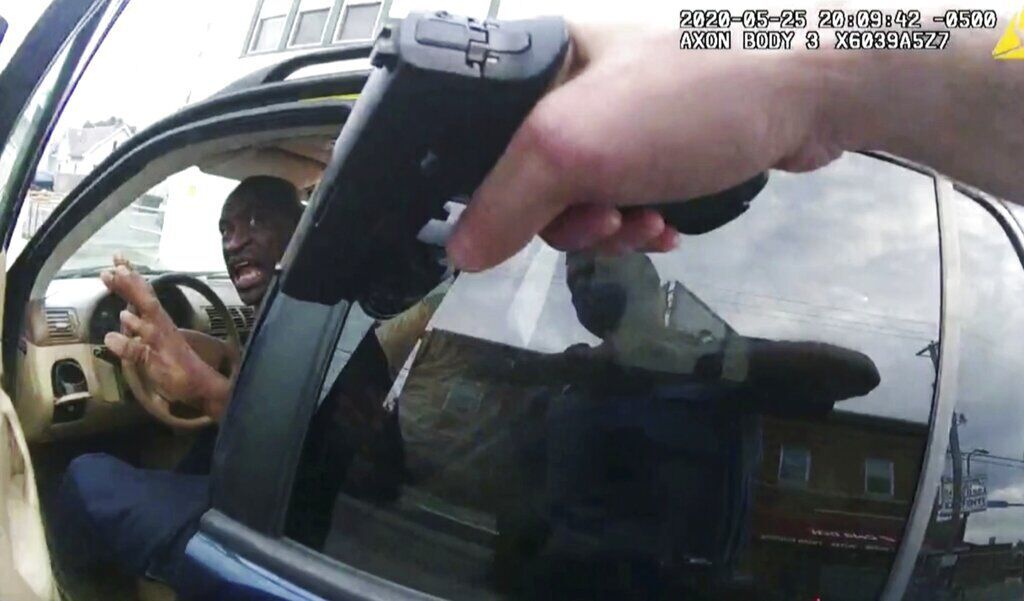 FILE - In this May 25, 2020, file photo, from police body camera video George Floyd responds to police after they approached his car outside Cup Foods in Minneapolis. 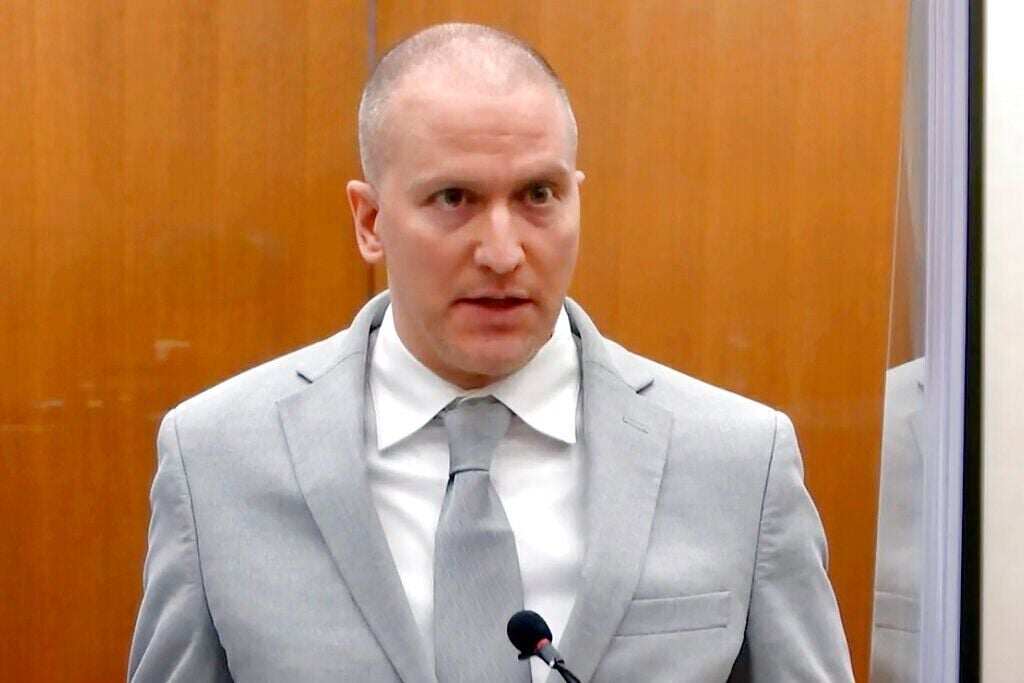 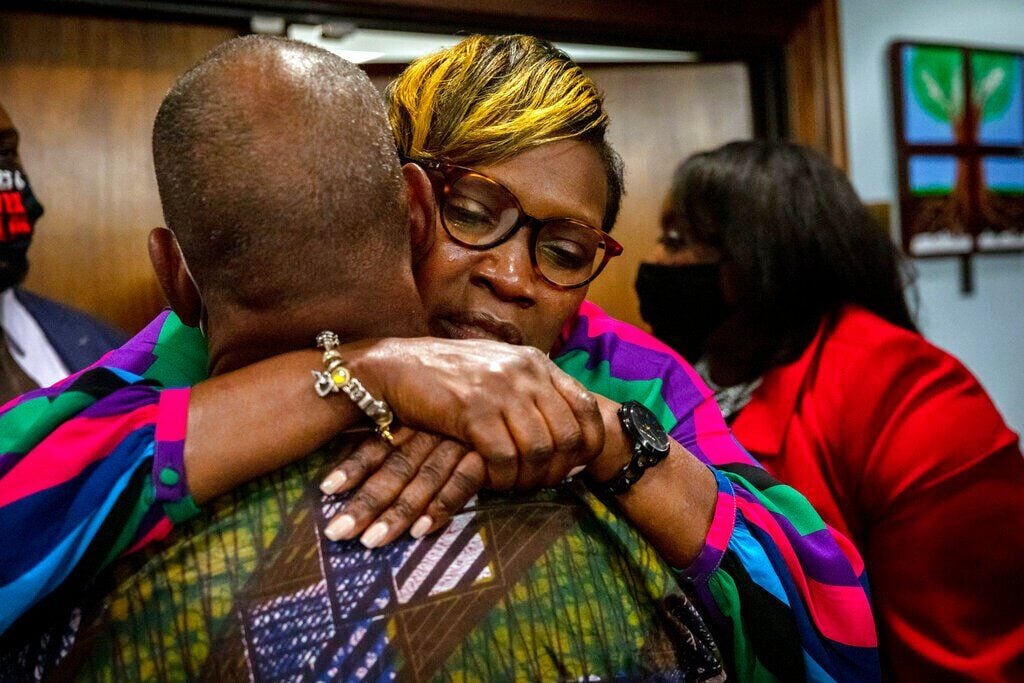 FILE - Ahmaud Arbery's mother, Wanda Cooper-Jones his hugged by a supporter after the jury convicted Travis McMichael in the trial of McMichael, his father, Greg McMichael, and neighbor, William "Roddie" Bryan, Wednesday, Nov. 24, 2021, in the Glynn County Courthouse in Brunswick, Ga. The three defendants were found guilty Wednesday in the death of Ahmaud Arbery. 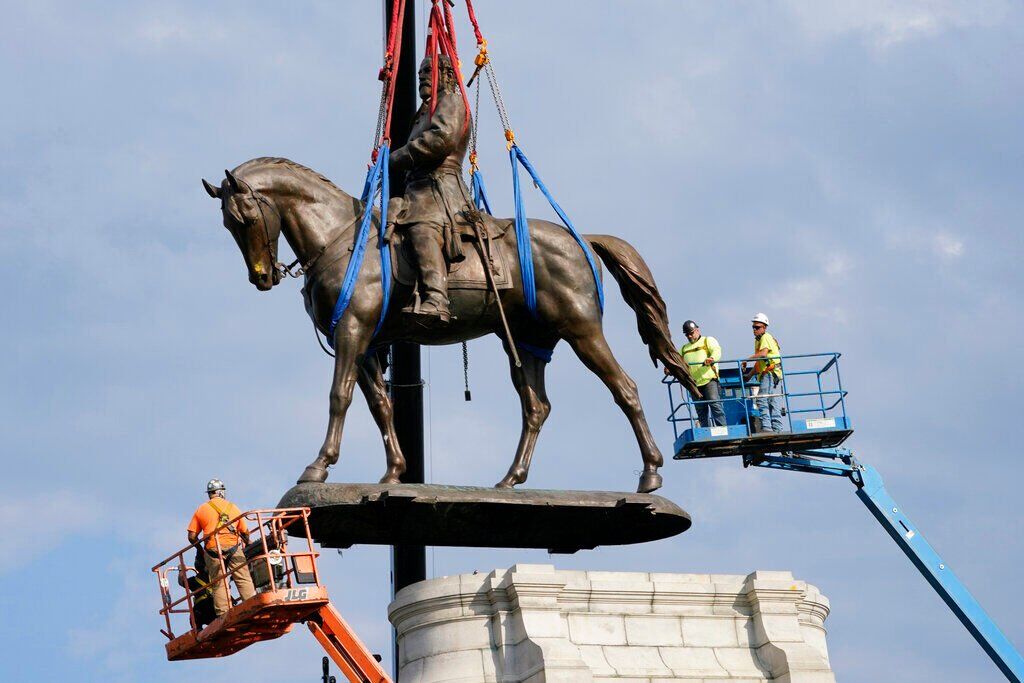 FILE - Crews remove one of the country's largest remaining monuments to the Confederacy, a towering statue of Confederate General Robert E. Lee on Monument Avenue in Richmond, Va., Wednesday, Sept. 8, 2021. The movement to identify and reckon with structural racism moved forward in 2021. As local and state governments grappled with the removal of statues of racist historical figures, local school boards fought over how to teach the uneasy history of racism in the United States. 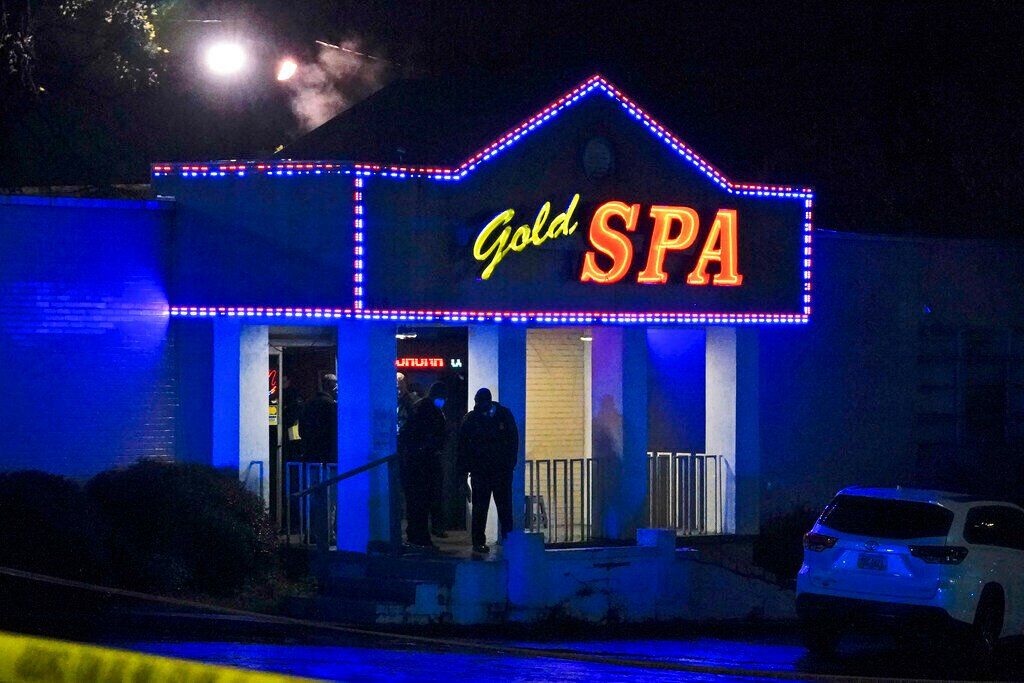 FILE - Law enforcement officials confer outside a massage parlor following a shooting on Tuesday, March 16, 2021, in Atlanta. Shootings at two massage parlors in Atlanta and one in the suburbs left multiple people dead, many of them women of Asian descent. After after the shootings, there was an overwhelming wave of support for the Asian American community. 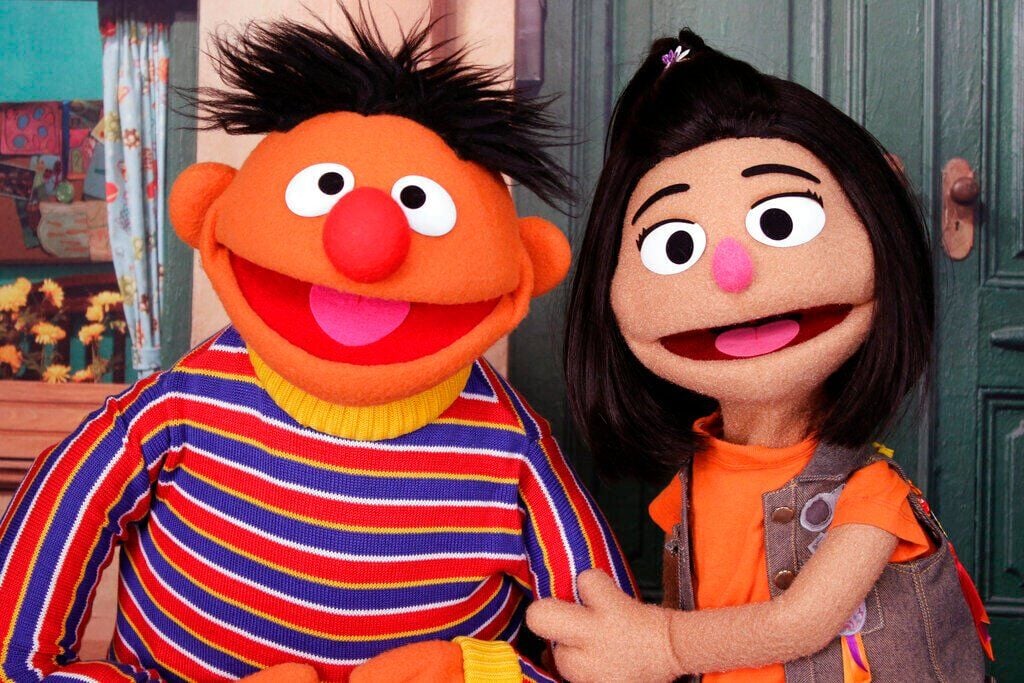 FILE - Ernie, a muppet from the popular children's series "Sesame Street," appears with new character Ji-Young, the first Asian American muppet, on the set of the long-running children's program in New York on Nov. 1, 2021. Ji-Young is Korean American and has two passions: rocking out on her electric guitar and skateboarding.