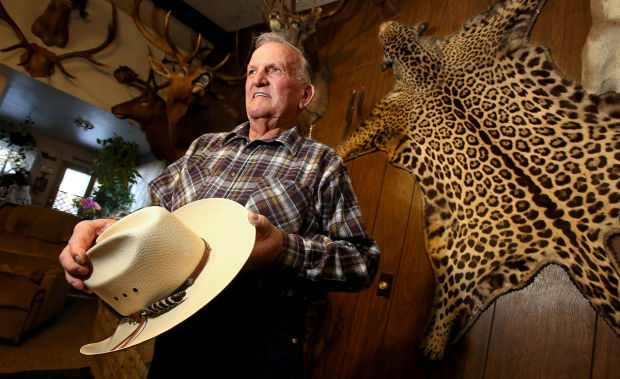 Terry Penrod's jaguar pelt decorates his living room in Lakeside. He shot the animal in 1963, thinking it was a big bobcat. But his kill turned out to be the nation's last known female jaguar, giving rise to a controversy over critical habitat that goes on today. 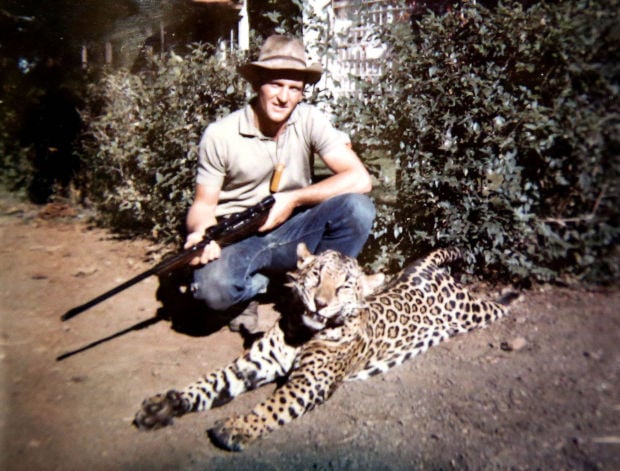 This is a 1963 hand out photo Terry Penrod (TERRY PENROD ) as he crouches next to jaguar he killed on September 28, 1963 (SEPT 28, 63) while varmint hunting between Big Lake (BIG LAKE) and Reservation Lake (RESERVATION LAKE). Courtesy Terry Penrod 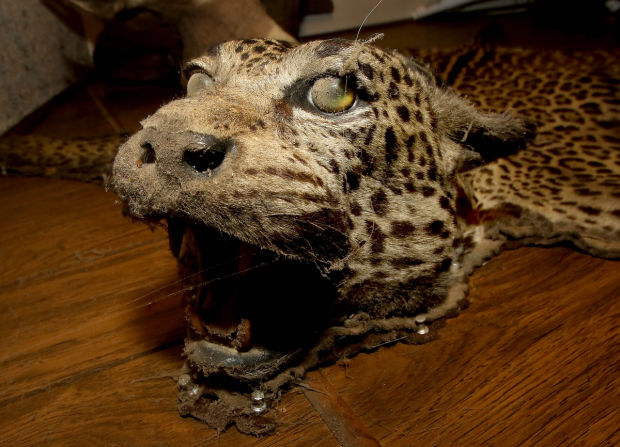 From 80 yards away, hunter Terry Penrod couldn't tell what kind of cat he was shooting at.

It was around 7 p.m. in late September 1963, near Big Lake in the White Mountains. The sun was down and the shadows were deep, clouding the animal's features. He saw no stripes, spots or colors.

One shot from his .257 Winchester rifle cut the animal down.

A friend asked Penrod, then 24 years old, what he'd shot. The answer: "I killed a big bobcat."

His kill turned out to be the nation's last known female jaguar. Not that there was much outcry. Back then, Penrod recalls, "everything was a predator - lions, jaguars, bobcat, lynx. It was legal to shoot them."

Today, jaguars are classified as endangered. Hunting them has been banned in Arizona since 1969. To hunt mountain lions, which had bounties on them in the 1960s, you need a tag from the State Game and Fish Department. But that female jaguar's presence a half-century ago looms over the current debate over whether - and how - to protect habitat for jaguars in the U.S.

The central question: Does the fact that no female jaguars have been spotted in this country for 50 years mean they can't exist here? Or does it say that if jaguars lived here before, they could again?

The U.S. Fish and Wildlife Service is proposing to protect an area larger than Rhode Island - 838,000 acres - as critical jaguar habitat. The swath spans several mountain ranges, known as the Sky Islands, south of Interstate 10 in Southeast Arizona and Southwest New Mexico. Fish and Wildlife also is preparing a jaguar recovery plan, which lays out a strategy to ensure that the jaguar eventually survives and thrives in the U.S. The habitat proposal has become a flash point, drawing 153 written comments in support and opposition.

Only five or six male jaguars have been documented in the two states in the past 16 years - just last fall, an adult male was photographed in the Santa Rita Mountains near Tucson. Opponents of habitat protection say the small numbers and the absence of females prove this area isn't a realistic home for jaguars. In their view, conservation efforts should focus on Mexico and points south, where jaguars exist in far greater numbers.

This group includes Arizona Game and Fish and leading jaguar scientist Alan Rabinowitz along with ranchers, mining companies, local soil and water conservation districts, and the governments of Sierra Vista and Cochise County.

But supporters of jaguar habitat protection say it is justified by the animal's earlier presence in this country. A valid estimate of U.S. populations before 1960 doesn't exist, but it's known that jaguars lived as far north as the Grand Canyon, as well as in New Mexico, California, Texas and Louisiana, before they were hunted and poisoned to near-extinction here.

Supporters of critical habitat include environmental groups such as the Center for Biological Diversity, Life Net Nature and Sky Island Alliance. They want the area expanded to include more of Southern Arizona along with the White Mountains, other parts of the Mogollon Rim and the Gila National Forest in New Mexico.

Jaguars were not on Penrod's mind that 1963 evening as he hunted at 9,000 feet in the Apache-Sitgreaves National Forest.

He and a buddy, Eddie Holland, had spent most of Sept. 28 "varmint calling," blowing a tube with a reed that produces sounds like a rabbit or a fawn. He was new to varmint calling, but he and Holland had already loaded their car trunk with a half-dozen coyote pelts they had taken after their calling lured the animals into shooting range.

Now, he was backed up against a fallen tree, focusing on a bull elk that would bugle back each time Penrod blew the calling device. He looked up and saw the cat coming up a nearby ridge.

It walked behind a big log, then Penrod started calling, and it crawled out through some knee-high ferns. He fired off one shot and hit the animal in the neck.

"If I'd realized it was a jaguar," he says, "I probably would have got so excited I would have missed."

After the kill, the two men walked over to where the cat lay, its big yellow eyes shining, its yellow skin and spots in plain view. Holland asked again what it was.

"It looks like a leopard to me," was Penrod's new guess.

The next day, he took the animal to a nearby Game and Fish office, where officials identified it as a jaguar. Ninety-eight pounds with its guts removed, it was longer than 5 feet, with a 2-foot-long tail.

"Oh, boy, I felt kind of like Superman," Penrod says one recent day. The cat's thick pelt, still yellow with brown spots, is on his living room wall in front of him, to the right of the fireplace. "Just how many people had called in a jaguar with a varmint caller? I was the only one."

A scholarly 2001 book, "Borderlands Jaguars," lists more than 30 jaguars, including the one Penrod shot, that were killed in Arizona and New Mexico in the 20th century outside of the proposed critical habitat. Most were in the Mogollon Rim area and in the Gila River watershed, which encompasses the Gila and Santa Cruz rivers and their tributaries.

But Arizona Game and Fish, in opposing jaguar critical habitat, says few have been found in the U.S. since 1962: 10 to 12, all but one male with the sex of the other unknown. Earlier records are "not entirely solid" and harder to verify due to their age, said Larry Riley, the department's assistant director for wildlife management.

The wildlife service's own habitat proposal, Voyles pointed out, says jaguar recovery will happen mostly outside the U.S. because so little of the cat's home range is here. "This accurate statement," he wrote, "refutes the need to establish critical habitat in the U.S."

But that refers to the animal's current range, wrote Michael Robinson of the Center for Biological Diversity. Jaguars used to occupy a far larger area in the U.S. - they lived in North Carolina and Kentucky in the 1800s, as well as along the headwaters of the Platte River and the Rio Grande in Colorado, he wrote in his comments on the federal habitat proposal.

He also quoted a 1919 scientific journal account of a pair of jaguars at a den with two kittens in the Tehachapi Mountains of Southern California. Its author, C. Hart Merriam, was head of the U.S. Bureau of Biological Survey, the Fish and Wildlife Service's predecessor.

In the past, Robinson says, multiple scientists and government officials have referred to past jaguar records and have not cast doubt on them.

"The fact that jaguars were persecuted to the point where they lost their native home in the Southwest is exactly why recovery is needed," Robinson says.

The Wildlife Conservation Society wrote in its critical habitat comment that mountain ranges in Central Arizona and New Mexico "may represent unique habitat for the jaguar essential to the species."

The Arizona Game and Fish Department isn't convinced of the need to redefine the jaguar's northern range. It has questioned whether the jaguar Penrod shot was there naturally, saying its agents suspected the animal was planted by a hunting guide. Partly due to that, the Fish and Wildlife Service has classified the White Mountains-Mogollon Rim area as peripheral habitat, meaning it won't be a key part of its jaguar recovery plan.

Environmentalists at the Center for Biological Diversity scoff at the idea that the jaguar was planted. They say Game and Fish's 2011 report raising the issue contained no hard evidence.

But Game and Fish consultant Terry Johnson, who co-wrote the report, says the evidence "is sufficient to discount these animals as legitimate, natural occurrences." In saying otherwise, he says, the center is pushing "its agenda of increased regulatory control of public and other lands."

The guide suspected of releasing the jaguar, the late C.J. Prock, has acknowledged releasing imported mountain lions and jaguars in other cases. But David Brown, an author and Arizona State University wildlife biologist, says he asked Prock specifically about the Penrod jaguar. Prock said he hadn't imported it.

Now 74, Penrod is a retired heavy equipment operator and lumber grader. He still lives in Lakeside.

He doesn't see a future for the jaguar in the White Mountains.

A male was shot by a tribal trapper near Whiteriver on the White Mountain Apache Reservation in January 1964, just months after Penrod shot the female. Before that, the last known jaguar killing in the area was in 1924 near Cibecue, about 30 miles south of Show Low.

"This is not their habitat - they're jungle types. I doubt they could even make a winter in this elevation," Penrod says. "I think the one in Cibecue, like this one, if I hadn't killed it, it would have wandered out of here."

Penrod says he's glad the jaguar is protected and listed as endangered in the U.S. today. If he saw the big cat on a hunting trip now, he says, he would put down his gun and report the sighting.

Still, he's proud of that pelt on his wall alongside his other kills: an antelope and a bobcat, a javelina and a wild turkey, a bighorn sheep, a mountain lion and a bear.

In 2011, the massive Wallow Fire forced Penrod and his wife to flee their home for a time. They took the trophies with them.

"The only good thing about that," he says, "is that I gave them a good cleaning before they got put back up."

what is Critical habitat?

Under the Endangered Species Act, critical habitat is an area that is considered essential for conservation of an endangered species. It can include land that isn't currently occupied by that species if it's necessary for the species' recovery. The act forbids any federal or federally approved project from destroying critical habitat or making it unfit for an endangered species.

Terry Penrod's jaguar pelt decorates his living room in Lakeside. He shot the animal in 1963, thinking it was a big bobcat. But his kill turned out to be the nation's last known female jaguar, giving rise to a controversy over critical habitat that goes on today.

This is a 1963 hand out photo Terry Penrod (TERRY PENROD ) as he crouches next to jaguar he killed on September 28, 1963 (SEPT 28, 63) while varmint hunting between Big Lake (BIG LAKE) and Reservation Lake (RESERVATION LAKE). Courtesy Terry Penrod