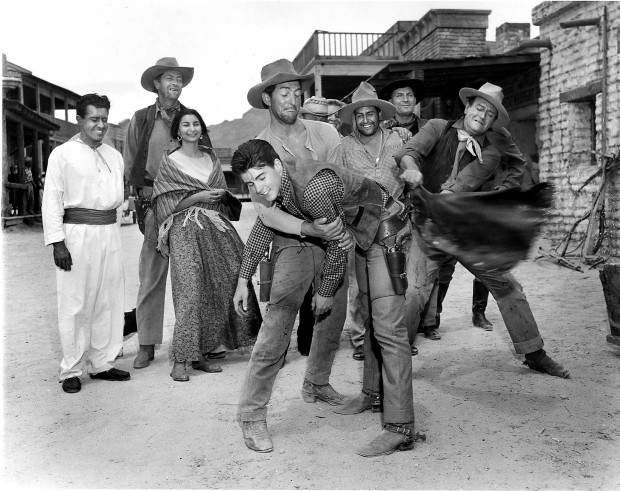 Dean Martin hangs on to Ricky Nelson as John Wayne takes a swing with a blanket on the set of "Rio Bravo" at Old Tucson Studios. 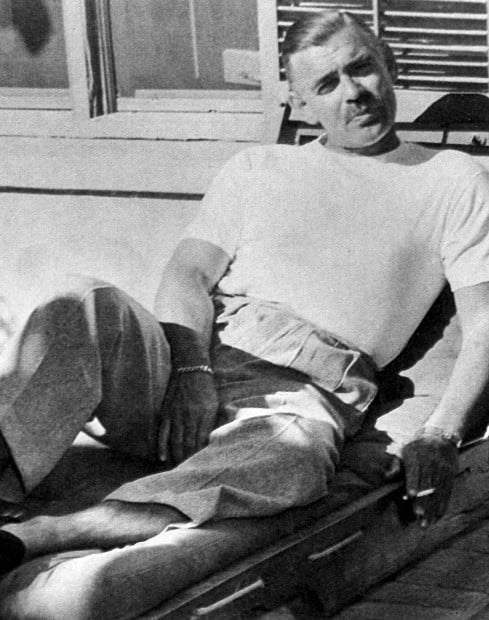 This is Clark Gable relaxing around the pool at the Arizona Inn. Not sure of the time frame. Looks like it could be the '40s or early '50s. Photo courtesy Arizona Inn. 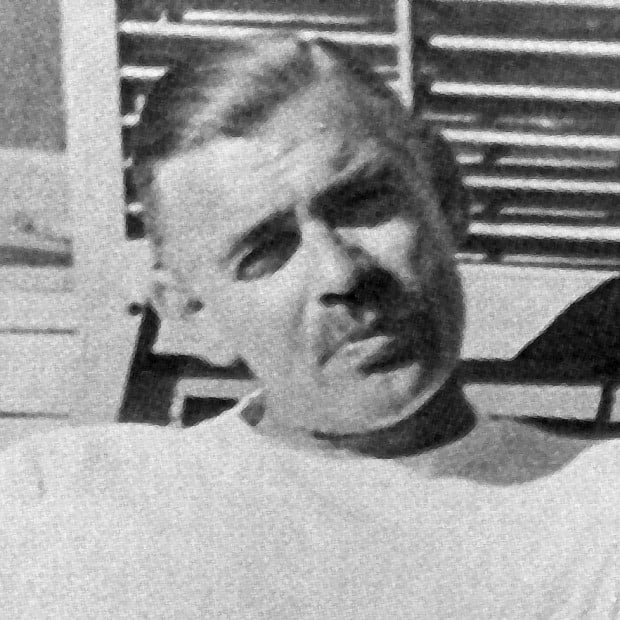 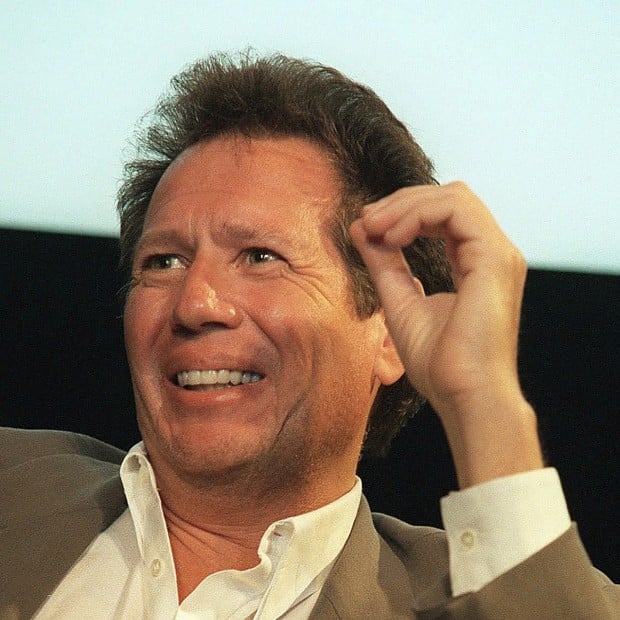 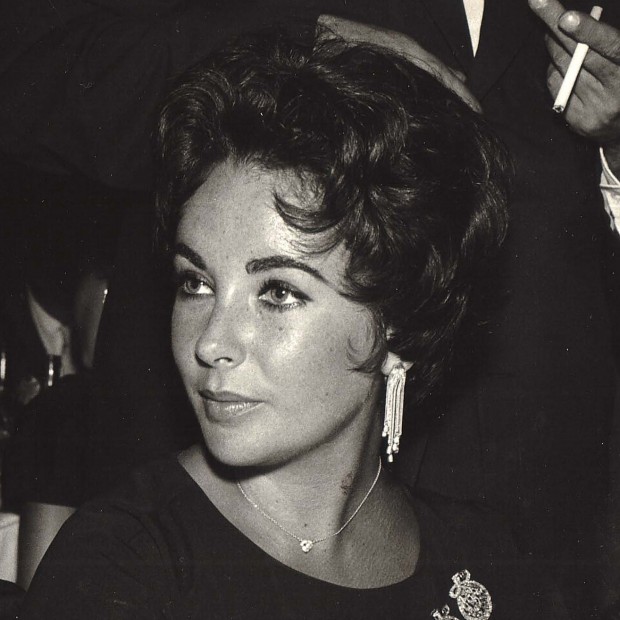 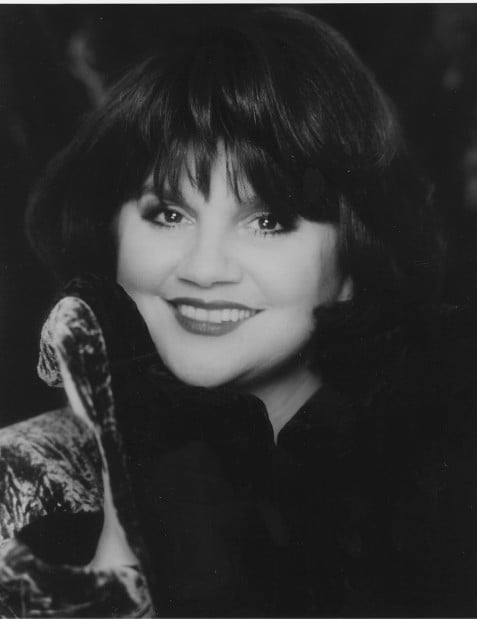 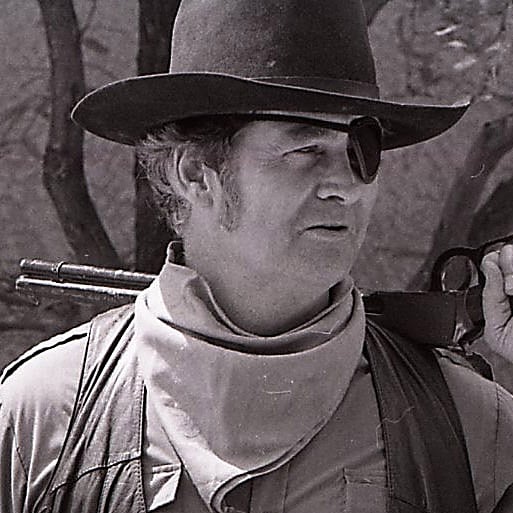 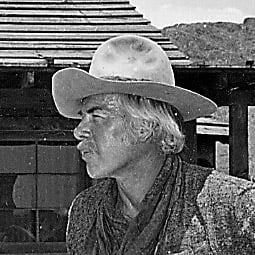 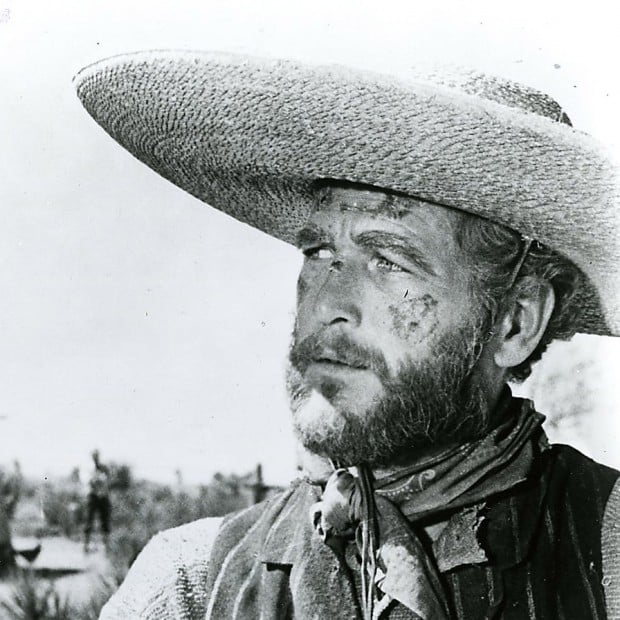 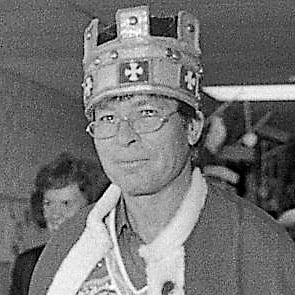 Everyone has a story. "We saw Lee Marvin at El Minuto."

"Paul McCartney asked us for directions to the cactus farm."

"I went to school with (pick one) Linda Ronstadt, John Denver, Garry Shandling."

Yep, Tucson has seen its share of celebrities over the years, from the infamous - Geronimo, John Dillinger - to the white-hot famous - Clark Gable, Elizabeth Taylor.

Some came to film various movie scenes, sleeping in Tucson hotels and gracing our town's various watering holes. And then they were gone.

Others stayed on for years, living among us, but still maintaining an aura of distance and privacy.

Here then, is a brief - and we acknowledge upfront, incomplete - scrapbook of stars who once shone their lights in Tucson, some briefly, some for decades.

Of all the Hollywood glitterati that ever hung their hats in Southern Arizona, movie star Stewart Granger was, no doubt, the most invested. Literally.

Here, he and actress-wife Jean Simmons would entertain everyone from Elizabeth Taylor to John Wayne.

"Dad managed the ranch until the sale," says Bibolet, who frequently rode with the cowboys out at the ranch.

"Where the golf course is now, I punched cattle through there thousands of times," says Bibolet. Or so it seems.

The original house, greatly expanded over the years, is now the restaurant for Kino Springs Golf Course, built in 1971.

"Half of the pro shop was my dad's office," says Bibolet, who remembers a rambling home with several fireplaces and a swimming pool.

Granger sold half of the acreage in 1959 and introduced Charolais cattle.

Nine years earlier, he and Simmons were married in Tucson, reportedly flown here by reclusive tycoon Howard Hughes. They divorced in 1960.

"I met Stewart and Jean just once," says Bibolet, whose folks entertained the stars at least once in the small home they kept on the property before the sale.

"When I asked my dad what Stewart was like, he said nothing," says Bibolet. "My mother said Jean was lovely. She came into the kitchen, fixed the salad, did the dishes afterward.

"I asked her what she thought about Stewart. She said, "He sat in the living room and drank a lot of your dad's whiskey.' "

The Arizona Inn jealously guards the privacy of its guests - famous or not.

"It was always 'privacy, quiet and sunshine,' " says Will Conroy, president of the inn his great-grandmother, Isabella Greenway, opened in December 1930.

Lately, however, Conroy has made an exception for stars who are no longer living who stayed at the inn decades ago.

"We have to have proof that they stayed here before 1960," says Conroy, who has assembled a collection of classic DVDs starring those luminaries that guests can check out to watch.

"Bob Hope famously came into the lobby twirling his golf club and saying, 'I love this place. It's like coming home.' "

Far as we know, Gable is the only Hollywood he-man who came to Tucson to pay a traffic fine and wound up witnessing a wedding down at the Pima County Courthouse.

According to the Dec. 20, 1951, Star, Gable was at the courthouse to pay a fine for a Dec. 4 accident near Cortaro involving four cars but no injuries.

After paying his fine, Gable was asked to witness the wedding of Lyle Winney and Ginevera Linsley. Following the nuptials, Gable told the press he was looking at buying a ranch in Southern Arizona.

While the jury is still out on whether Gable ever lived in a certain midtown home here back in the '50s, he was a frequent guest at the Arizona Inn.

Liz frequently came to Tucson in the '50s and '60s to visit her good friend, Jane Loew Sharples. One time, Sharples took Taylor to the Halfway Station, a gas station and restaurant on the old Nogales highway. "She loved the food so much that when she was in Europe with Richard Burton, she got a craving for it and they air-mailed the food to Europe," says Sharples.

Diana Amado also remembers that when her aunt and uncle ran the restaurant, her aunt would freeze the beans she cooked and send them to Taylor.

In June of '58, Taylor also slipped into a movie playing at the Catalina Theater. '"She had a kerchief on her head and was wearing what we used to call pedal pushers," said former candy-counter worker Sally Robinson Lindberg, who snagged an autograph.

Ex-Beatle McCartney and his wife, former Tucsonan Linda Eastman, bought a 151-acre ranch on Tucson's far east side in 1979 and were frequently spotted in area restaurants and stores.

Sadly, the ranch is also where Linda passed away in April of 1998.

If Sir Paul still visits Tucson, he's certainly been under the radar screen, though his company, MPL Communications, still pays taxes on the property.

The blue-eyed actor made several films in the Tucson area and Tucsonans were likely to run into him everywhere from a poker game to the trails out at the Arizona-Sonora Desert Museum.

The star of "Bonanza" and "Little House on the Prairie" used to call Tucson "his second home." From 1983 until his death in 1991, Landon hosted the annual Celebrity Tennis Classic in Tucson. He also took time out to support the Community Food Bank drive, exhorting a crowd at El Con Mall to add to the mountain of non-perishables growing in the center court.

The tough-guy actor who owned a home in the Foothills and died here in 1987, banged around town in a pickup truck - one frequently headed either for a hardware store or the dump.

Neighbor Jane Loew Sharples remembers the time Marvin pulled weeds in her front yard. The actor shied away from most public appearances in Tucson, the exception being annual fundraisers for wildlife rehabilitator Sarah Gorby.

Movie star lovers on and off the screen, Katharine Hepburn and Spencer Tracy frequently stayed in a large casita at Hacienda del Sol after the former girls' school became a guest ranch in the 1940s.

"We still rent it out," says Tom Firth, one of the resort's managing partners. The 1,600-square-foot home at the edge of the resort boasts two bedrooms, living room, dining room and kitchen. "It's the only one that still has a kitchen," says Firth.

The stand-up comic and star of "The Larry Sanders Show" grew up in Tucson, where he became a ham radio enthusiast. "We made half of our garage into a room for his ham radio operators' club," says Shandling's mother, Muriel Shandling.

Both she and her son were frequent customers of Casa del Rio, an east-side Mexican restaurant, says owner Doug Jackson, who has an autographed photo of Shandling hanging near the cash register.

"Garry would come in a couple of times and bring the whole entourage with him" says Jackson.

Muriel Shandling sometimes shipped the food to Los Angeles, where her son was working. So did Jackson. "He started having cast parties and we FedExed the food over there quite a bit."

For eight years, beginning in 1949, the singer born as Henry John Deutschendorf Jr. lived in Tucson, where his father was stationed at Davis-Monthan Air Force Base.

During that time, he went to school here and sang in the Tucson Arizona Boys Chorus.

According to Star archives, native Tucsonan and Catalina High school alum Linda Ronstadt started what would become a spectacular singing career on North Fourth Avenue with her sisters, in a band called the Three Ronstadts.

At last report, Ronstadt still keeps a home in Tucson but spends most of her time in San Francisco.

The Ramada Inn on Interstate 10 near St. Mary's Road was one of Wayne's favorite places to stay while filming at Old Tucson, says Bob Shelton, former owner of the theme park and movie studio. "He wanted to be where the crew and cast were staying. He mingled with everybody."

Well, almost everybody. When approached for autographs, "Duke" would pull out autographed cards from his pocket and hand them out. "He never broke stride," says Shelton's former wife, Jane Loew Sharples.

Acclaimed classical pianist Van Cliburn owned an almost-5,000-square-foot house for 32 years in Tucson, selling it in 1993.

The home, on a dirt road called North Indian House Road, was on a large lot north of what is now Park Place.

Early news clips indicate Cliburn, like so many others, came to Tucson at least partly for his health. In 1958, it was to recover from a bronchial infection; in 1959, it was for two months of "rest and relaxation." That same year, the young pianist also had some dental work done in the Old Pueblo.

During the late '50s and all through the '60s, Cliburn performed in Tucson, everywhere from the Tucson Symphony Orchestra to the living room of the Rev. Newton H. White.

The two men also dined at the Cliff House on North Oracle Road near Rudasill, where the pianist reportedly downed three bowls of turtle soup.

Other notables - and yes, we know we're missing a passel - with Tucson connections:

Linda Ronstadt and Emmylou Harris recorded the CD, "Western Wall: The Tucson Sessions," in the late Isabella Greenway's home at the Arizona Inn.

Dean Martin hangs on to Ricky Nelson as John Wayne takes a swing with a blanket on the set of "Rio Bravo" at Old Tucson Studios.

This is Clark Gable relaxing around the pool at the Arizona Inn. Not sure of the time frame. Looks like it could be the '40s or early '50s. Photo courtesy Arizona Inn.