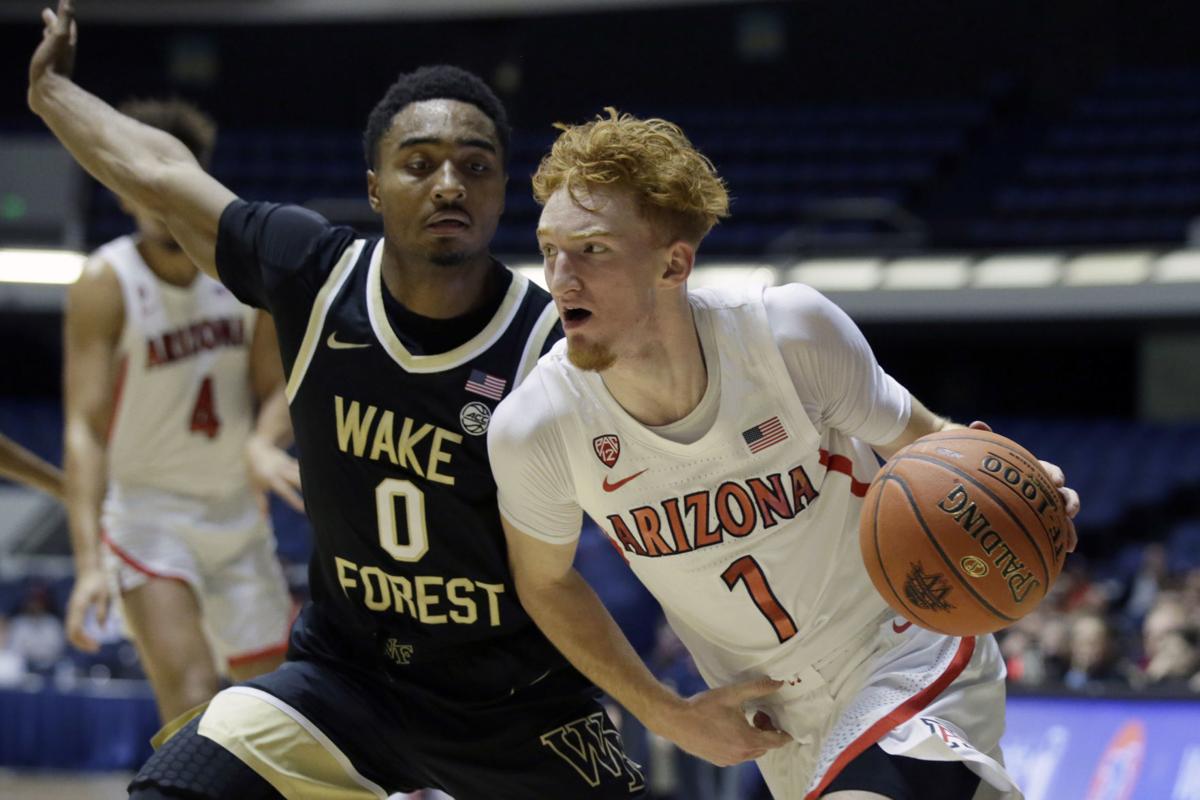 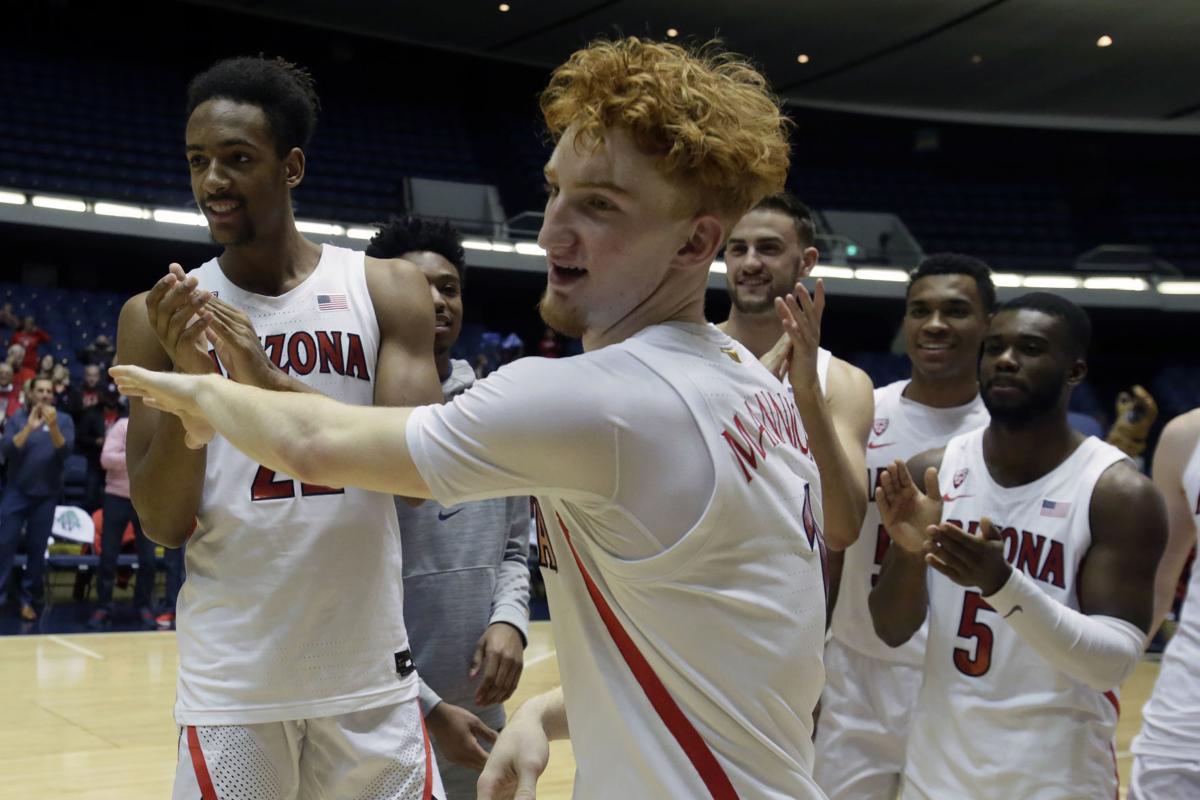 “The first time I played with him, I kind of knew he was going to be good,” said Wildcats senior Dylan Smith of freshman Nico Mannion, above. “And he’s only going to get better.” 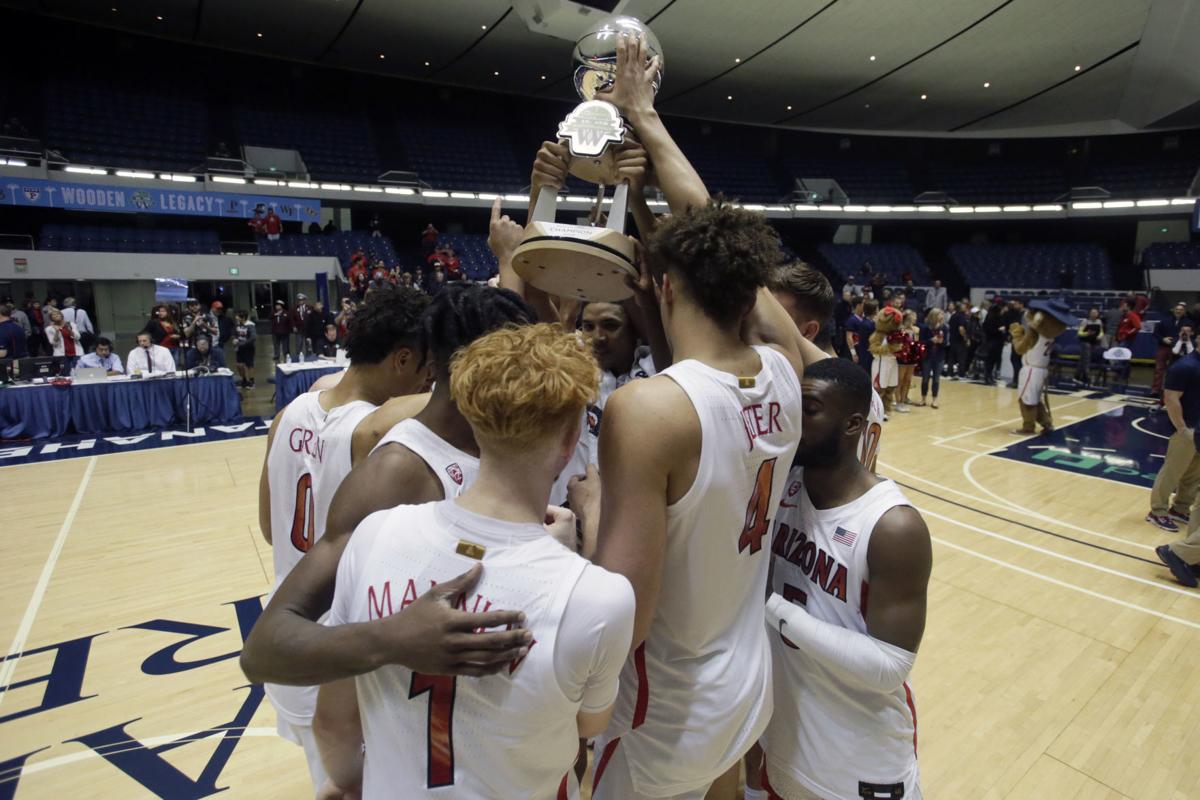 Arizona players hoist the trophy after winning the Wooden Legacy title on Sunday night. UA will face its toughest test of the season to date when the No. 12 Wildcats visit No. 16 Baylor on the road at 10 a.m. Saturday.

ANAHEIM, Calif. — Arizona guard Nico Mannion won the Pac-12’s Freshman of the Week award Monday, and he had a pretty strong case to win overall Player of the Week, too.

After all, as he showed again while earning the Wooden Legacy MVP award over the weekend, Mannion is not just an ordinary freshman.

Although ASU’s Remy Martin picked up the overall Player of the Week award for the conference for his 33-point effort in the Sun Devils’ win at Princeton, Mannion’s impressive numbers spanned over three games in the Wooden Legacy.

In UA’s wins over Pepperdine, Penn and Wake Forest, Mannion averaged 15.3 points and 7.3 assists while also grabbing 1.3 steals. And numbers don’t tell the whole story: One of Mannion’s field goals was a game-winning, eight-foot runner he flipped in as he headed out of bounds with two seconds left to give UA a 93-91 win over Pepperdine on Thursday.

“What a great coast-to-coast play for a freshman,” UA coach Sean Miller said after that game. “It was shot like a true hookshot there at the end but that’s who he is. He’s made a lot of game-winners in his day and great guards do. For him to take the ball full-court like that and make that shot, that was a big moment for us.”

Then there was Mannion’s mastery from the field against Penn in the semifinals on Friday, when Mannion sprayed 11 for 14 shooting all over the court, with pullups, runners, layups or step-backs, whatever the situation called for and without forcing a thing.

“Obviously,” Miller said after that one, “Nico Mannion was spectacular on offense.”

By the time it was all over on Sunday, senior guard Dylan Smith was sitting next to Mannion on the postgame interview podium, when he was asked what it felt like watching a freshman come in and start running the show as well as Mannion has.

Basically, Smith indicated, Mannion is not a freshman.

“The first time I played with him, I kind of knew he was going to be good,” Smith said. “His IQ is off the charts. He was very advanced. He just sees the game different than everybody. So it wasn’t a surprise for me, just playing with him from the summer.

“And he’s only going to get better, so the sky’s the limit for him.”

Gettings may miss Baylor gameThe fact that senior forward Stone Gettings was kept away from Anaheim Arena on Sunday with a concussion and massive black eye suggested he may be doubtful for the Wildcats’ game on Saturday at Baylor.

Miller said Gettings stayed at the team’s hotel with family members during Sunday’s game, and had no update on when he might return.

“His eye is shut,” Miller said. “I was kind of kidding the other night when I said we may have to cut him like a boxer — his eye, you couldn’t see his eye.

“He took a big shot, and so he has a concussion. The symptoms came overnight, which sometimes happens. Sometimes they come right away, sometimes they’re delayed. But, you know, we have a week here. I’m sure most of this week he’s going to be recovering and I don’t have a prognosis, other than he’ll eventually return. “

Miller had said after Friday’s game that Gettings didn’t have any initial concussion symptoms.

But Miller said he didn’t know if UA would have beaten Wake Forest for the Wooden title if not for the two seniors, who were both named to the all-tournament team. Smith had 20 points on 6-for-9 shooting while Jeter had 17 points and nine rebounds.

Jeter didn’t score in double figures in any of UA’s first six home games but averaged 15.3 points while shooting a 76.9% over the three days in Anaheim. His 17 points Sunday came opposite Wake Forest 7-footer Olivier Sarr, who had 21 points and 13 rebounds.

“Their big guy Sarr is a very talented player, and he can affect shots,” Miller said. “But Chase was 7 for 10 from the field and a lot of times he just scored back to the basket one-on-one over him. And we’re not gonna play against a guy bigger than that. That’s why I thought Chase was a big reason we were able to win.”

The Wooden title helped UA move up to No. 12 in the Associated Press Top 25 poll on Monday.

The Wildcats are now the highest-ranked team in the Pac-12, followed by Oregon at 13th, Colorado at 20th and Washington at 22nd.

Michigan’s Battle 4 Atlantis championship, with wins over North Carolina and Gonzaga, resulted in a tie for the highest jump ever (to No. 4) into the poll after not being ranked the week before. Kansas also made the jump to No. 4 on Nov. 27, 1989.

That was a near-flip of what happened to Arizona in 2017-18, when the Wildcats entered the Battle 4 Atlantis at No. 2 and then fell out entirely after going 0 for 3, with losses to NC State, SMU and Purdue.

Christmas is coming early for those planning on making the road trip to Waco, Texas when the No. 12 Arizona Wildcats battle No. 18 Baylor on S…

“The first time I played with him, I kind of knew he was going to be good,” said Wildcats senior Dylan Smith of freshman Nico Mannion, above. “And he’s only going to get better.”

Arizona players hoist the trophy after winning the Wooden Legacy title on Sunday night. UA will face its toughest test of the season to date when the No. 12 Wildcats visit No. 16 Baylor on the road at 10 a.m. Saturday.