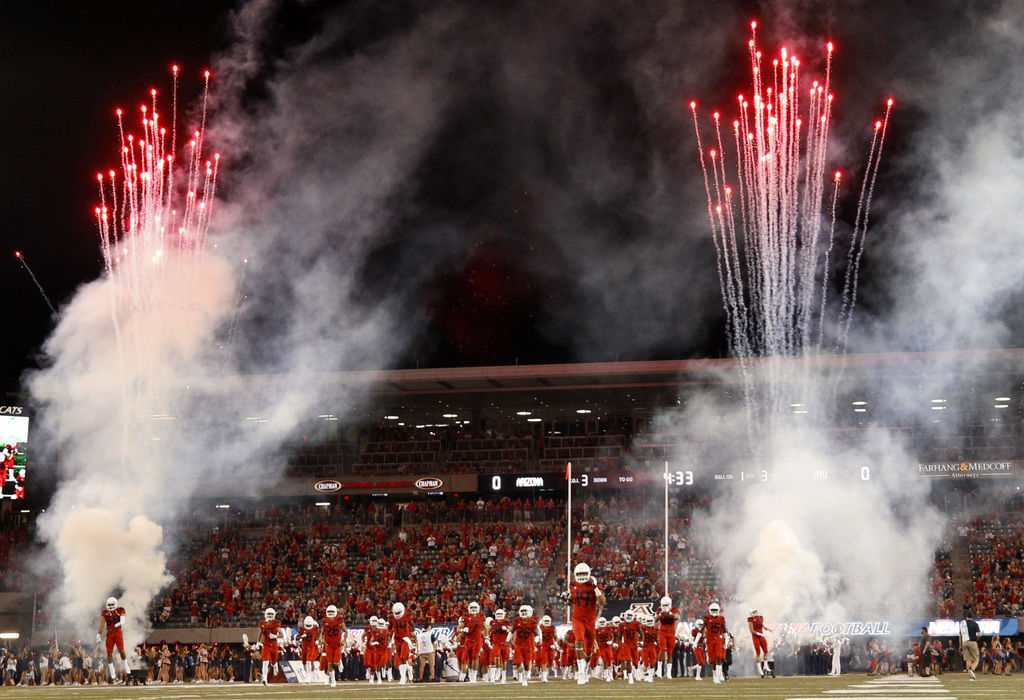 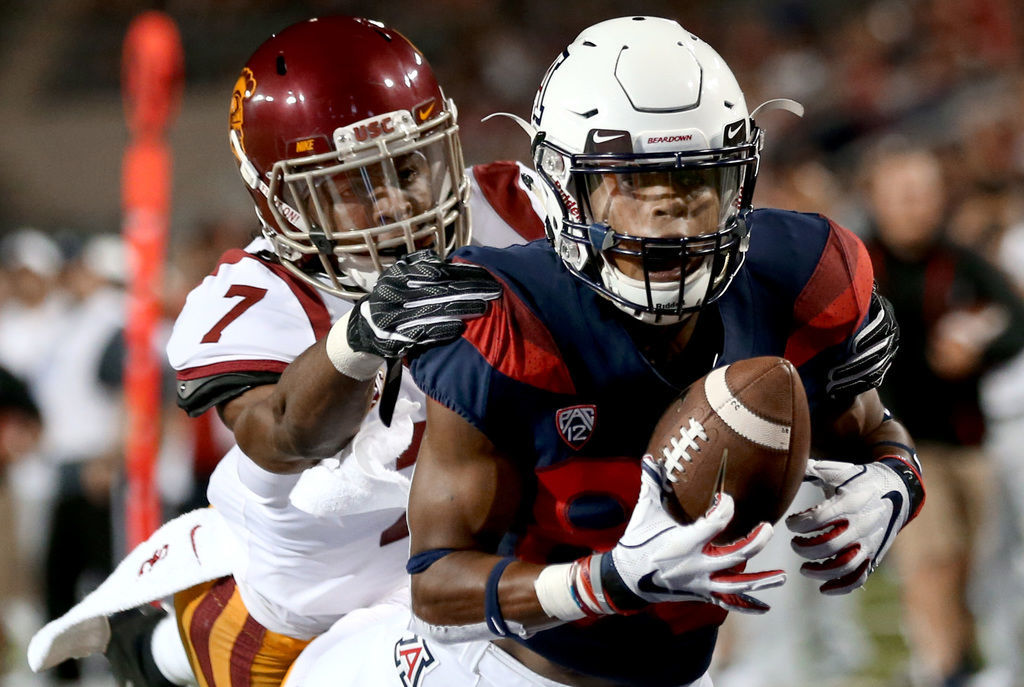 Arizona wide receiver Stanley Berryhill III (86) manages to corral the ball as he falls into the end zone after making an over the shoulder grab behind USC safety Marvell Tell III (7) for a third quarter touchdown at Arizona Stadium, Saturday September 29, 2018, Tucson, Ariz.

Arizona offensive lineman Donovan Laie snaps on his helmet as he gets ready to run through a blocking drill on the second day of practice for the upcoming season, Tucson, Ariz., July 26, 2019.

The Arizona Wildcats are home for the rest of the month, starting with Saturday night’s game against NAU. That should be a good thing.

Since Kevin Sumlin became their coach last year, the Cats are 4-3 at Arizona Stadium. That mark is nothing to brag about. But it sure beats the alternative.

Arizona is 1-5 on the road under Sumlin, including this season’s opening loss at Hawaii. The Wildcats have looked and played like a different team when they’re away from Tucson.

In this week’s “Cats Stats,” we aim to answer two questions:

1. Is the home/road differential under Sumlin unusual?

2. What’s the underlying cause behind that disparity?

Arizona having a better record at home than on the road is not uncommon, although Sumlin’s road winning percentage to date pales compared to his predecessor’s.

The Wildcats went 13-18 in true road games under Rich Rodriguez for a winning percentage of .419. (Neutral-site and bowl games are not included in this analysis.) Sumlin’s Cats are sitting at .167.

Of course, the sample sizes aren’t comparable just yet. A closer examination shows that Rodriguez went 2-4 (.333) in his first six road games as UA coach. That mark fell to 2-5 before back-to-back wins at Colorado and Cal during the 2013 season.

Rodriguez also took advantage of the fact that Arizona had eight home games and four road games in 2012, enabling his first Wildcats team to go 7-5 during the regular season.

However, only once during Rodriguez’s tenure did Arizona have a worse road record than last year’s 1-4 mark. That happened during the disastrous 2016 campaign, when the injury-plagued Wildcats went 0-4 on the road and 3-9 overall.

The 2018 Cats were hardly alone in struggling in away games. Every team besides Utah in the Pac-12 South lost four road games. Colorado and UCLA matched Arizona at 1-4. The five teams combined to go 7-20.

The trend continued over the first two weeks of this season. Home teams went 6-1. Road teams went 1-2, with Utah notching the lone victory at BYU.

In general, teams across all sports fare better at home, where they have crowd support and familiarity with their environs. Studies also have suggested that officials subconsciously favor home teams.

Although they lost only one more game on the road than at home last season, the Cats’ point differential reveals a striking incongruity in performance. Arizona’s three homes losses came by a combined 10 points, or 3.3 per game. Its road defeats came by 101 points, or 25.3 per game. If you take out the one-point loss at UCLA, it’s even worse: 33.3.

Multiple factors dictate the outcome of football games. No unit could be absolved of blame for last year’s blowout losses at Houston (45-18), Utah (42-10) and Washington State (69-28).

But a review of drive charts from those games and others reveals a recurring theme.

Only once in those three road losses did the Wildcats score on the first possession of a half — and that came when the UA was trailing WSU 55-14 entering the third quarter.

Arizona failed to score on its first 10 drives against Houston, its first six against Utah and its first two against WSU. In each game, the Wildcats fell into holes they couldn’t climb out of.

A similar scenario played out at Hawaii: Arizona came away empty on the first three series of each half. As a result, the Wildcats were playing from behind for most of the game.

“I think the slow starts just come from trying to feel out the game,” UA tackle Donovan Laie said. “Sometimes, like Hawaii, they threw new fronts at us that we never practiced.”

Laie said the Rainbow Warriors deployed more linebackers than the Wildcats had seen on film. That unexpected wrinkle doesn’t explain why Arizona struggled so much to start the third quarter. But Laie did say that Sumlin and offensive coordinator Noel Mazzone have tried to create similar situations in practice so the offense can respond “better and earlier.”

Sluggish starts on offense — which sap that side of the ball of confidence and rhythm and put the UA defense in vulnerable positions — weren’t exclusive to road games last season. In two of their three home losses — against BYU and USC — the Wildcats failed to score on their first possession of either half. They scored on their first two drives against Arizona State before blowing a 19-point lead in the fourth quarter (and that’s another story for another time).

“When you start slow, it tends to just get you,” receiver Stanley Berryhill III said. “If something goes wrong, you’re already a step behind.”

Only two times has the UA put together a sustained stretch of offense on the road to start a half under Sumlin and Mazzone.

In its lone road victory last season, at Oregon State, Arizona scored on its first possession of the game – and its first three of the second half. The Wildcats played from ahead for most of the afternoon and were able to control the flow with their rushing attack, which accumulated a season-high 442 yards.

After failing to score on its first six possessions against UCLA, Arizona scored on each of its first three drives in the second half. Unsurprisingly, that game was the Wildcats’ most competitive road loss of the season.

Whether it’s game-planning or in-game adjustments, Sumlin and Mazzone need to do a better job of jump-starting the UA offense. The players — in particular quarterback Khalil Tate — need to be sharper coming out of the locker room.

Although Arizona doesn’t return to the road until Oct. 5 against Colorado, the tone can be set right here in Tucson. If they don’t solve that problem, the Wildcats probably will be home for the holidays again.

A look at home and away records at Arizona and throughout the Pac-12 in recent seasons:

'She means so much to me': Arizona coach Adia Barnes excited to see mentor enter Arizona Hall of Fame

Adia Barnes said Joan Bonvicini's belief in her began a career that came full circle when she returned to the UA.

Case Cookus chose football over firefighting, got hot, and found a home at NAU

Junior-college stint led to opportunity at NAU, where he's become a veteran amid a coaching change. The Lumberjacks play at Arizona on Saturday night.

'Mr. Football' on why Arizona's likely to keep Marcel Yates, the Cats' history with NAU — and a prediction

Photos: Final touches are put in place on Arizona Stadium before first home game of season

Photos from a media tour of updates at Arizona Stadium Friday morning, Sep. 6, 2019. Updated concession areas on the east side and patio-like …

Arizona wide receiver Stanley Berryhill III (86) manages to corral the ball as he falls into the end zone after making an over the shoulder grab behind USC safety Marvell Tell III (7) for a third quarter touchdown at Arizona Stadium, Saturday September 29, 2018, Tucson, Ariz.

Arizona offensive lineman Donovan Laie snaps on his helmet as he gets ready to run through a blocking drill on the second day of practice for the upcoming season, Tucson, Ariz., July 26, 2019.