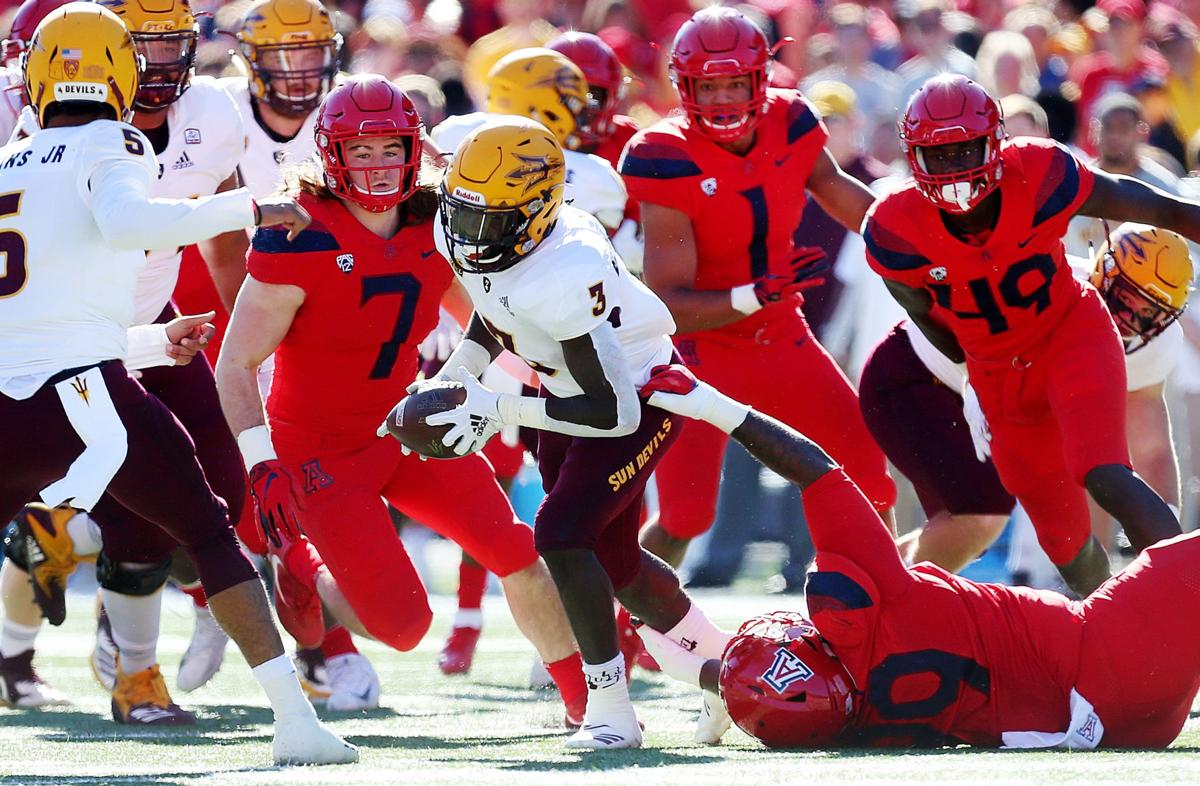 ASU running back Eno Benjamin, center, tries to get away from the UA defense in the first quarter of last year’s game. The Sun Devils outscored the Wildcats 17-0 in the final 13 minutes to win 41-40.

Weird stuff happens when the Arizona Wildcats and Arizona State tussle for the Territorial Cup.

In 2016, a 2-9 Arizona squad riding an eight-game losing streak rushed for more than 500 yards, didn’t throw a pass in the second half and upset ASU.

In 2017, a QB injury and some adventures in punting — which then-coach Rich Rodriguez summarized as “unfathomable” — led to a Sun Devils comeback in the second half.

And in 2018, UA somehow managed to squander a 19-point lead in the fourth quarter.

Except when it doesn’t.

The past two Territorial Cup matchups followed a pattern — one we’ll explore in the season-ending edition of “Cats Stats” and one the Wildcats can’t afford to repeat.

In both games, Arizona held a double-digit lead in the second half. Both times, the Wildcats frittered away the advantage. How did that happen? Why did it happen?

Arizona held a 24-14 lead late in the second quarter. The Wildcats took possession at their 45-yard line with exactly a minute left before halftime after a Lorenzo Burns interception. They had two timeouts.

Arizona then ran two plays — both handoffs to J.J. Taylor — before calling a timeout with 14 seconds left in the half. They ran one more play, another handoff to Taylor, before using their final timeout with three seconds left.

The run plays gained 10 yards. With the ball at the ASU 45-yard line, Arizona had only once choice: a Hail Mary.

Khalil Tate’s pass fell incomplete. But after he released the ball, he was driven into the grass at Sun Devil Stadium. Tate aggravated a left-shoulder injury and was unavailable for most of the second half.

Let’s pause the retelling at this point to examine a number that illustrates where Rodriguez went wrong during that sequence.

The Wildcats ran the first two plays in 46 seconds, an average of 23 seconds per play. That was within range of what they had done in the first 29 minutes of the game — averaging one play every 26.7 seconds.

That’s not what they should have done. Arizona had a premium opportunity to expand its lead before halftime — yet treated that opportunity as if it were some random series in the first quarter. Making matters worse, Tate got hurt.

UA fans know what happened next: The Wildcats went three-and-out on the first possession of the second half and had a punt blocked, which technically isn’t a turnover but has the same effect. ASU got the ball at the UA 5 and scored to make it 24-21.

On the next series, Dawkins threw an interception. ASU got the ball at the UA 30. Another touchdown put the Sun Devils ahead 28-24. The lead wouldn’t change hands again.

The blocked punt and the interception — two turnovers, essentially — had a profound impact on field position. ASU’s average starting point in the third quarter was the UA 37-yard line. In the first half, it was the ASU 22.

Here, the Wildcats should have kept running their offense as they had up to that point. Instead, they went into four-minute mode. They ran the ball six straight times, gaining one first down. After the sixth run came up a yard short at the UA 45, Arizona punted.

The official stats for the drive: six plays, 20 yards, 4:04 of clock time. Now, the possession also included the punt, so you can’t just divide the time by the number of plays to get the per-play average.

But let’s say the punt, which went for a touchback, took 45 seconds — 40 for the play clock, five for the kick itself. That would put the average for the six preceding plays at 33.2 seconds — almost 10 seconds more than Arizona’s average through the first three quarters (23.9).

Again, you know what happened next: ASU drove 80 yards for a touchdown. The Sun Devils went for two and converted to make the score 40-32.

On the ensuing possession, Tate threw an interception. ASU took over at the UA 22 and kicked a field goal to make it 40-35.

On the next possession, Tate and Taylor couldn’t connect on a handoff. The Sun Devils recovered the fumble, again taking over at the Wildcats’ 22. Eno Benjamin raced into the end zone on the next play to give ASU its first and only lead.

Again, the turnovers — officially two this time — had a massive effect on field position. ASU’s average starting point in the fourth quarter was the 50-yard line. In the first three quarters, it was the Sun Devils’ 23.

So what are the lessons here?

No. 1: Read the room. Rodriguez should have gone for the jugular at the end of the first half in 2017; Kevin Sumlin shouldn’t have eased up early in the fourth quarter last year.

No. 2: Protecting the ball is paramount.

Here’s the thing about that, though: The 2019 Wildcats have been taking care of the ball lately. They haven’t committed a turnover in three straight games. The fact that they lost them all — by an average of 24.7 points — is worrisome to say the least.

Put the 2-point chart away until the fourth quarter. Have an aide place it in one of those briefcases with a combination lock and make sure he or she doesn’t tell you the combo.

If Sumlin had gone for one instead of two on two occasions against ASU — both failed attempts to extend Arizona’s lead to 14 points — and the game played out in basically the same manner, the Wildcats would have had 42 points entering the fourth quarter.

Herm Edwards went for two after ASU’s first touchdown of the fourth quarter to make it a one-score game. Even if he had done so in the alternative scenario — and made it — the score would have been 42-35 when the fumbled exchange happened. ASU would have been the one facing the 2-point dilemma after Benjamin’s touchdown.

Edwards went for it (and failed) at the end of ASU’s 35-34 loss at Oregon State on Nov. 16. Maybe he would have against Arizona, too.

Either way, it’s better to force that decision upon your opponent than be the one chasing points.

Daniels, tailback Eno Benjamin and receiver Brandon Aiyuk will be a handful for the struggling UA defense in the 2019 Territorial Cup.

Roadrunners look forward to Thanksgiving on the road, but can't overlook past Bakersfield first

Both teams will wear home uniforms in Saturday's rivalry game, played in Tempe.

ASU running back Eno Benjamin, center, tries to get away from the UA defense in the first quarter of last year’s game. The Sun Devils outscored the Wildcats 17-0 in the final 13 minutes to win 41-40. 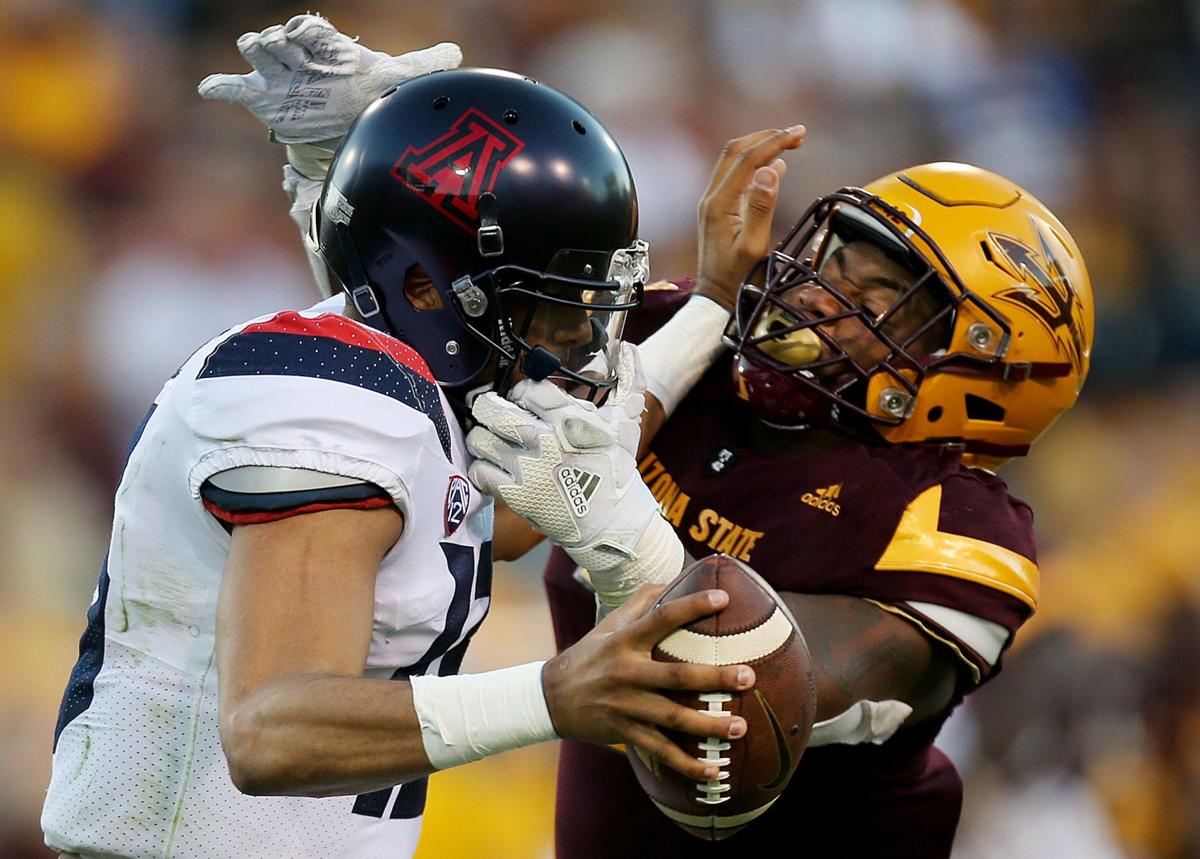 Wildcats quarterback Brandon Dawkins, left, tries to escape the clutches of DJ Calhoun in the 2017 contest. Poor clock management at the end of the first half helped ASU stay in the game. 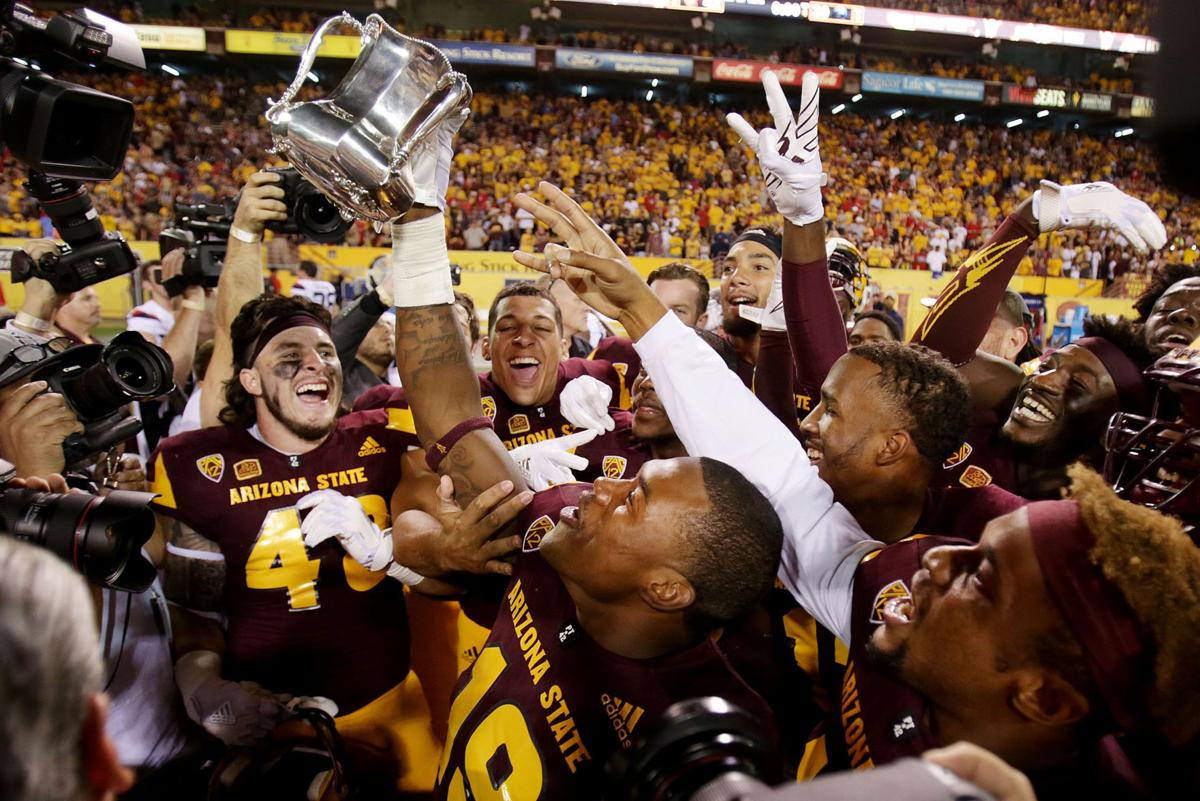 ASU had reason to celebrate after their comeback win over Arizona in 2017. The Sun Devils outscored the Wildcats 28-6 in the second half to win 42-30. UA led 24-14 near the end of the first half and had a chance to extend the lead, but instead Khalil Tate got injured. 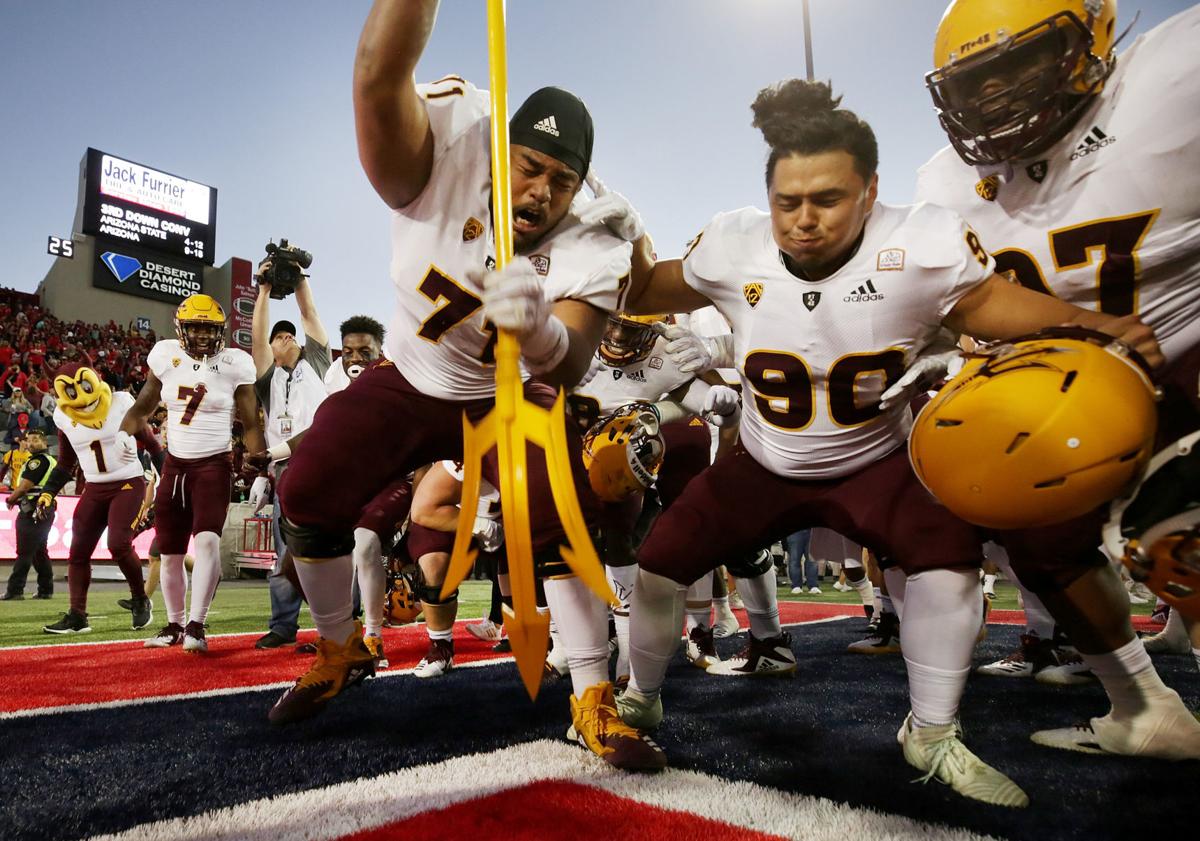 Arizona State offensive lineman Steven Miller rams the pitchfork into Arizona end zone after last year’s game. The Sun Devils are 6-3 against the Wildcats this decade, including a 3-1 mark in Tempe, the site of this year’s game. ASU has rallied from double-digit deficits to beat the Wildcats in each of the past two years. 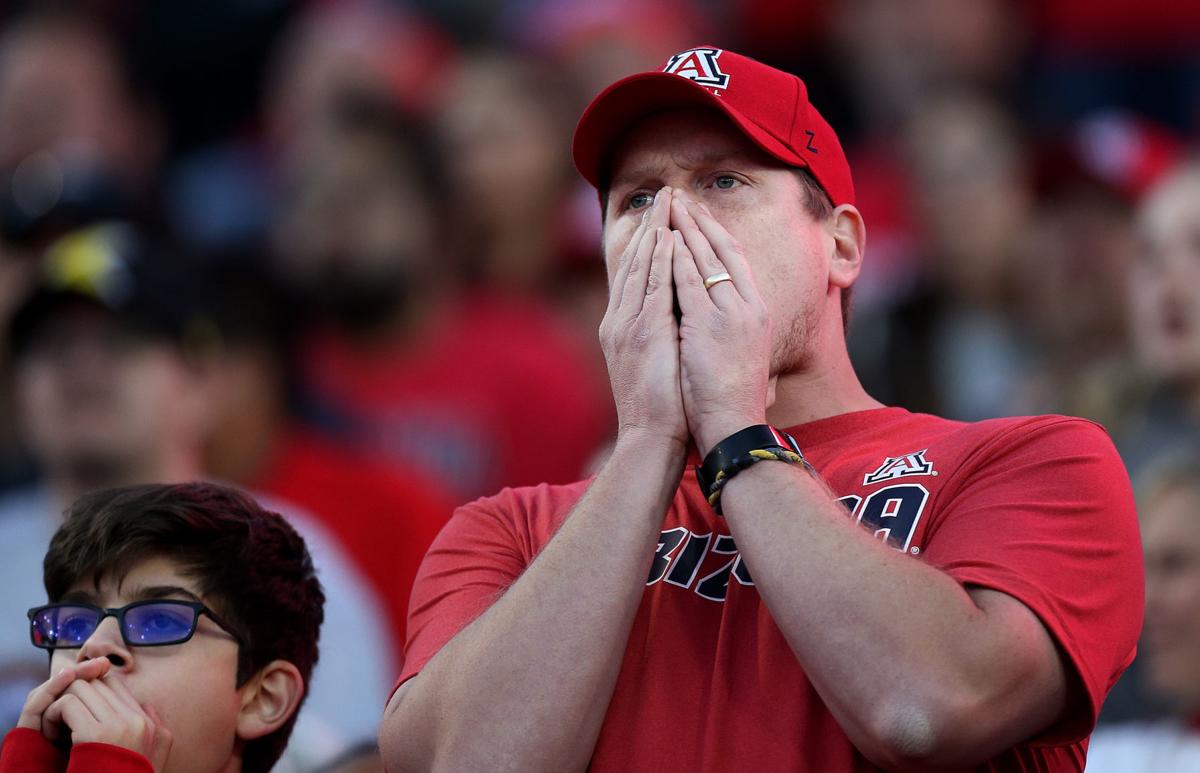 Arizona Wildcats fans thought victory was in their grasp against the Sun Devils last year until the fourth-quarter meltdown kept UA from a bowl game.