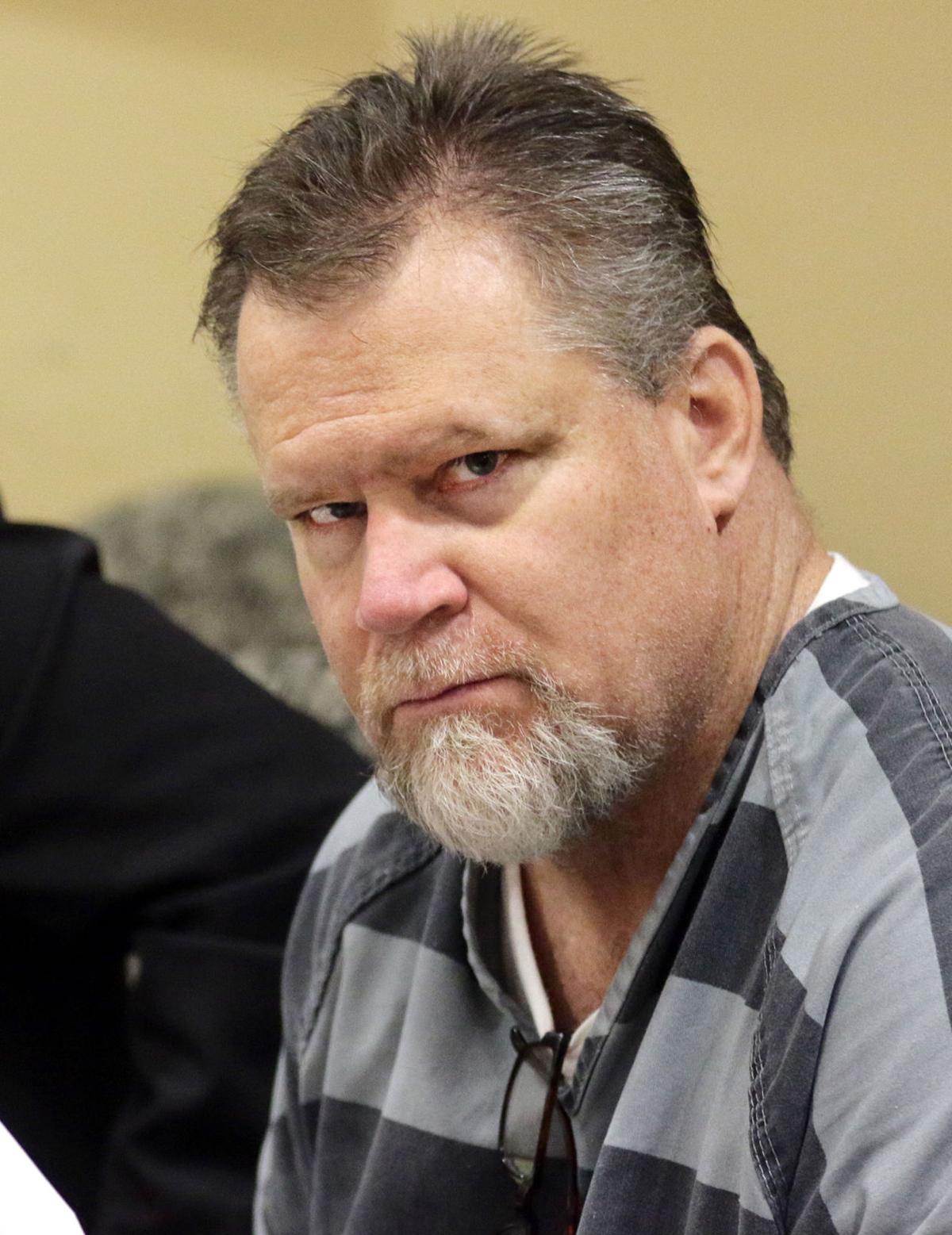 Former UA track coach Craig Carter, convicted of aggravated assault and assault with a dangerous instrument, during his sentencing hearing in Pima County Superior Court on May 14, 2018 in Tucson, AZ. 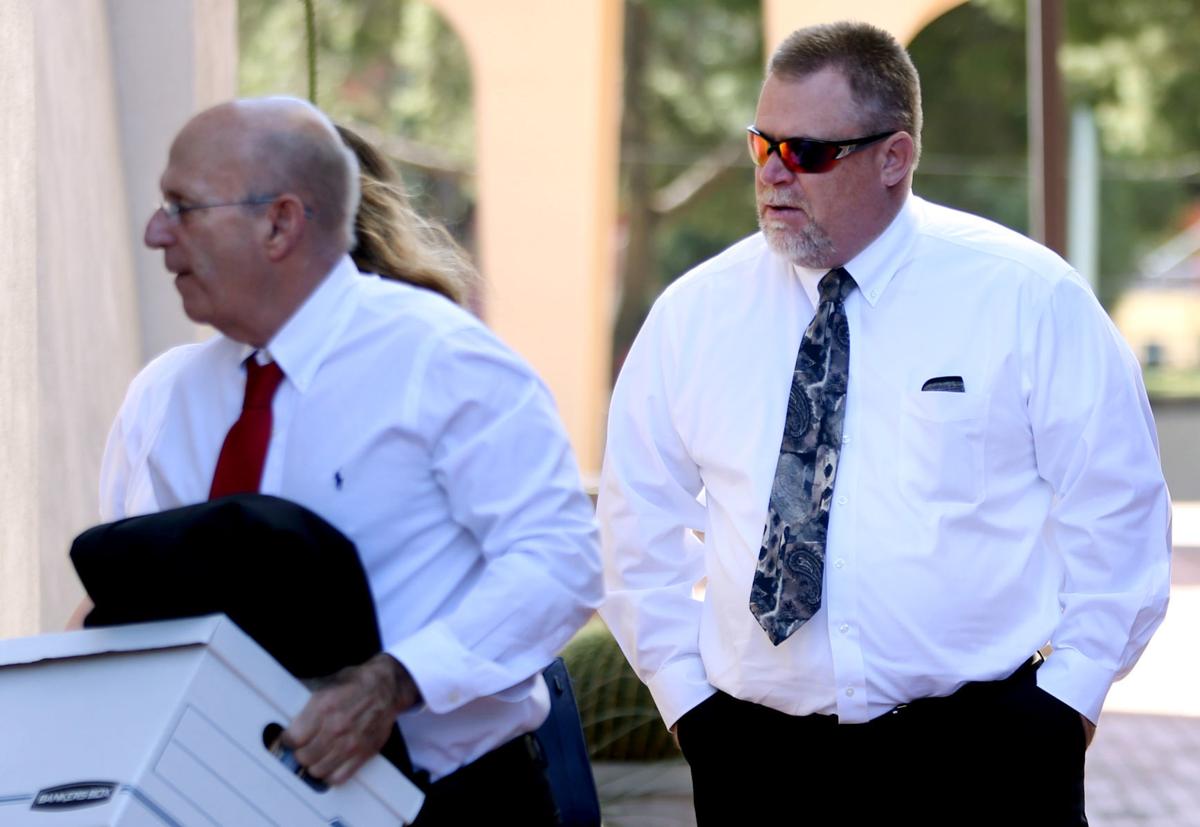 Craig Carter, right, a former Arizona track and field coach, with attorney Dan Cooper, will serve his stalking sentence at the same time as the assault sentence.

A former Arizona Wildcats assistant track and field coach will serve five years in prison for threatening a former athlete with a box cutter.

Craig Carter, 50, was sentenced Monday. He was convicted of two counts of aggravated assault — one with a deadly weapon — on March 30, nearly three years after he was arrested for choking former UA thrower Baillie Gibson in his McKale Center office while threatening her with a box cutter. The pair had previously been involved in a sexual relationship, which Gibson maintains was not consensual.

Carter sobbed Monday as he stood to address Pima County Superior Court Judge Teresa Godoy. He apologized to Gibson and Julie Labonté, who was Gibson's roommate and teammate and testified against Carter in trial.

"I'm truly sorry and I hope and pray someday they can forgive me," Carter said. "They never have to worry about me ever again."

Carter also was sentenced Monday to a 1.5-year prison term for the second aggravated assault conviction, which will run at the same time as the 5-year term.

Carter did not take the stand during his three-day trial, but the jury still heard from him in the form of a videotaped confession and emails, text messages and voicemails left on Gibson's phone, several of which contained threats.

Days after Carter's conviction, he filed a motion for a new trial, but he withdrew his motion on April 30, when he accepted a plea with Pima County prosecutors for the remaining charges in the case.

Weeks before Carter's trial, Godoy accepted Carter's motion to sever the charges in the case. While he stood trial on two counts of aggravated assault, charges of stalking and disrupting an educational institution remained active in the case.

In a separate case, Carter was charged with four counts of aggravated harassment, after he violated a protective order against Labonté by attempting to contact her on Facebook and Skype.

During the April 30 hearing, Carter pleaded guilty to one count of stalking and one count of aggravated harassment, in exchange for the other charges being dropped. He was sentenced to three years in prison for stalking and 2½ for violating the protective order, sentences that will run concurrently with one another and concurrently with his five-year sentence for the assault charges.

On Monday, Gibson told the court that "not a day goes by that I don't look over my shoulder to make sure Craig is not following me."

Gibson said she had high hopes when she moved from a small town in Wyoming to Tucson, which was a "big city to me," she said, and Carter made her and her parents believe she would be safe at the UA.

"The reality of what followed was nothing like this," she told Godoy.

"Every day is a battle," Gibson said as she teared up and Labonté put her hand on her back in support.

Before she met Carter, she was an outgoing person who was always smiling, Gibson said.

"I feel like I have lost who I once was," she said.

She has to work hard to keep moving forward, but "I will not let this man take any more of my life from me," she said.

Carter's defense lawyer Dan Cooper read descriptions of Carter from letters submitted to the court on his behalf.

Carter's family and friends described him as "the kindest man I've ever met," "just a big teddy bear," and "humble," Cooper told Godoy. Athletes who were coached by Carter said he was "the best coach I ever had," "simply an amazing human being," and "completely gentle."

Carter already has suffered consequences, such as losing his house, job, and the respect of the athletic community, Cooper said. He now lives with his parents and works a $10-per-hour job.

"This is a broken man," Cooper said, noting Carter has suffered from depression for more than 20 years. "The way you see him now sobbing is how I see him every time I visit him in jail."

Despite being the minimum sentence, the five-year sentence is a "difficult and long prison term" for Carter, Deputy Pima County Attorney Jonathan Mosher said after Monday's hearing, calling it a "just punishment for what he did to this young lady."

Gibson "showed incredible strength" by confronting Carter and going through the trial, Mosher said. "As a student-athlete, nobody should have to go through that," he said.

Carter caused "a lot of trouble in our families, so to be able to finally see some years that he's going to go in prison, I think that's going to be good for us," Labonté told reporters outside the courthouse.

When asked if she had forgiven Carter, she said "I hope one day I will."

Gibson's mother, Billie Jo Gibson, said she was angry at the University of Arizona.

"They should have protected her," she said.

Cooper said by phone the sentence was fair, and "this case is an incredible tragedy for everybody."

Will Phil Mickelson finish in the top 20 at the US Open?

Will Aaron Rodgers be the starting QB for the Packers week 1?

Will Aaron Rodgers be the starting QB for the Packers week 1?

Carter's attorneys are claiming prosecutorial misconduct and legal errors by the judge.

Carter's defense has racked up $1 million in legal fees, all funded by taxpayers.

Craig Carter was previously convicted of assaulting the student athlete.

Craig Carter's sentences on these charges will run concurrently with his sentence on aggravated assault charges.

Episode will air throughout the day Sunday on ESPN2.

Craig Carter was sentenced on May 14 to five years in prison.

Craig Carter was transferred to the Eloy prison on June 1.

Former UA track coach Craig Carter, convicted of aggravated assault and assault with a dangerous instrument, during his sentencing hearing in Pima County Superior Court on May 14, 2018 in Tucson, AZ.

Craig Carter, right, a former Arizona track and field coach, with attorney Dan Cooper, will serve his stalking sentence at the same time as the assault sentence.