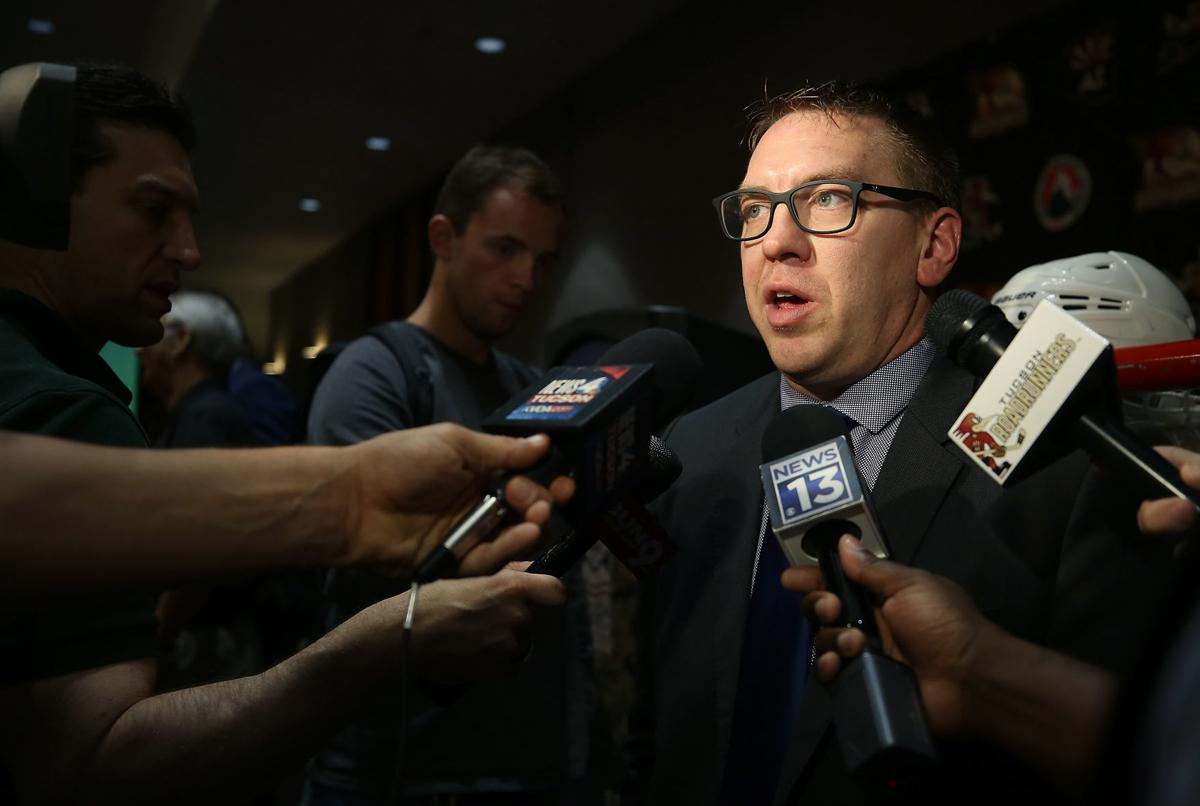 Jay Varady is the Roadrunners’ third coach in three years. His coaching stops include France, Canada and Pennsylvania. 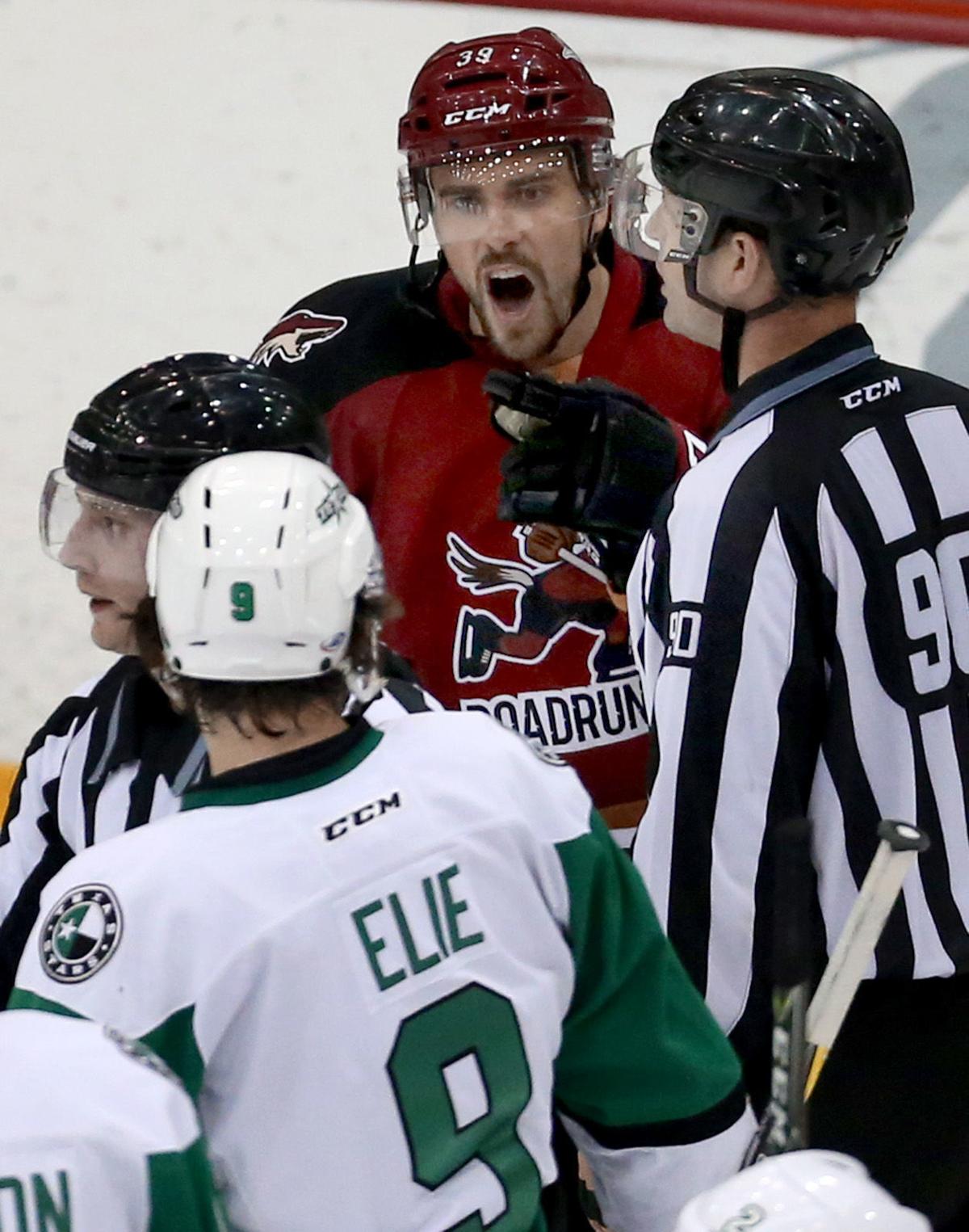 Tucson left wing Trevor Cheek is in his third year with the Roadrunners. He has scored 127 minor-league goals.

On a degree-of-difficulty scale, covering the Tucson Roadrunners turned out to be among the most labored of all assignments I’ve been given in this business.

How tough? Twenty years ago this week, I was five minutes shy of an 11 p.m., deadline when Ortege Jenkins somersaulted into the end zone to beat the Washington Huskies, launching the most memorable season in UA football history.

But re-writing that story, and many others in similar beat-the-clock chaos, was not as challenging as understanding what happens during a Roadrunners hockey game.

No matter how many Roadrunners games I attended, I could not tell the difference between a good player and a bad player. Or if there was any real strategy besides knocking the living H-E-double-hockeysticks out of a guy on the other team.

That’s never true in baseball and basketball. It takes 11 seconds to see that you want Mike Trout on your team.

Covering the Roadrunners reminded me of a long-ago day with the 1978 Tampa Bay Buccaneers, when I wrote that Bucs offensive tackle Darryl Carlton played well and could someday be an All-Pro.

A few days later, Buccaneers coach John McKay pulled me aside and tactfully corrected my assertion that Carlton was bound for the Hall of Fame.

“When we evaluate offensive linemen,” McKay said, “we watch and re-watch each lineman two or three times per play. It takes hours to get a true assessment. We watch every movement. Was he accidentally tripped? Did he just get lucky? Was he playing against someone smaller and slower?”

Carlton, a first-round draft pick in 1975, was out of football a year later.

That’s how I felt trying to write about the Roadrunners during the 2018 Calder Cup playoffs. As much as I fixed my eyes on 6-foot 3-inch, 210-pound Dylan Strome — the No. 3 overall pick of the 2015 NHL draft — I seemed to miss a game-turning play elsewhere on the ice.

What happened? Who did it? I was as close to clueless as you can get.

About all I figured out was that Strome looked imposing in a uniform, and that he didn’t back down from anybody. But in hockey, who does?

This season, which begins Saturday night at the Tucson Arena, I am determined to know the difference between boarding, hooking, cross-checking and high-sticking.

Until then, this is what I know about the Roadrunners as the 2018-19 American Hockey League season begins:

Varady is the Roadrunners’ third coach in three years. He will coach against AHL legend Roy Sommer of the San Jose Barracuda, 724 career victories, who began in this league in 1998, and has been the head coach of AHL franchises named Thoroughbreds, Sharks, Barons and Barracuda. Similarly, Varady — who is just 41 — has spent the last 15 years coaching in France, Washington, Pennsylvania, Iowa and Ontario, Canada.

Tucson’s training camp roster included 13 Canadians, two players from Sweden, another from Switzerland and even one from Beverly Hills, California. Arizonans? None.

The AHL then made the Eagles the “rival” of the Roadrunners, scheduling 12 games between the two teams. The Roadunners play the other Pacific teams, all in California, just eight times each.

Pacific Division clubs play just 68 league games; the rest of the AHL plays 76-game schedules. Why? Logistically, it’s a long haul to the wide open spaces of the West and notably expensive for the Roadrunners to travel to the rest of the AHL.

Undrafted in his amateur days, Cheek has reached the so-called Triple-A level of pro hockey by playing for teams named Hitmen, Oil Kings, Monsters, Komets, Rampage and Giants. This is his third year with the Roadrunners, and he has scored 127 minor-league goals.

The AHL scouting analysis of Cheek is that he’s “unafraid” and “lacks fear.” That’ll get you a long way in hockey. His journey is such that the bio from his Twitter feed says “Hockey player living all over the place trying to beat the odds.” Think Crash Davis in “Bull Durham.”

Some have it worse: San Jose has just 13 Friday-Saturday home games.

Isn’t it strange that the Tucson Arena has never sold naming rights for its sports facilities? Unlike college sports, there’s nothing pure about pro hockey. It’s a for-profit business. Go for it.

Yet the Roadrunners play in a division in which the Colorado Eagles play at the Budweiser Events Center; Bakersfield and Ontario play in arenas named for financial institutions, and the San Diego Gulls play at Valley View Casino Center.

With the Indoor Football League debuting at the Tucson Arena in March, it’s time to commercialize the name of the 47-year-old arena.

The income from naming rights could be used to build the Roadrunners a practice facility, a coveted second sheet of ice in Tucson that could be shared with the fast-growing youth and adult hockey leagues in Tucson.

Munish Sood told the jury Wednesday that he paid Bowen's father in exchange for a commitment to Louisville. Bowen was seriously considering Arizona.

Greg Hansen: Sean Miller's Act III is a reboot, not a rebuild

Despite outside predictions, Wildcat players feel they have talent to make a deep run in March.

Four months after he last played with the Arizona Wildcats, Cesar Salazar will once again take the field with them. But he won’t be playing wi…

The universities of Arizona and Oregon — both Nike and Pac-12 schools — were mentioned prominently during opening statements in the federal trial against three men accused of wire fraud and conspiracy to commit wire fraud.

Greg Hansen: Wildcats need a milagro after another dud of a game

The Wildcats fell short of a miracle in the final ticks, and a late blocked kick might just sum up the season.

Logo comes with a nod to All Souls Procession, Dia de los Muertos and more.

Arizona is expected to add a second five-star guard to its 2019 recruiting class on Thursday, when Australia’s Josh Green announces his colleg…

One of the most luxurious hotels in the world is in Marana, Forbes says

The Ritz-Carlton, Dove Mountain is one of the 58 hotels on the list

A fatal collision occurred before a stretch of northern Arizona highway washed out by rain was closed because of a giant sink hole, authorities say.

A woman was arrested after she attempted to smuggle methamphetamine into the United States on Monday, officials say.

Greg Hansen: 'Mr. Football' on one Arizona Wildcat that can relate to Khalil Tate

The Star's Greg Hansen wonders if Arizona would've been better served by redshirting the injured quarterback.

Roadrunners will raise banner, then turn page at 2018-19 season opener

Two No. 1 goalies still a luxury as Roadrunners return home

Jay Varady is the Roadrunners’ third coach in three years. His coaching stops include France, Canada and Pennsylvania.

Tucson left wing Trevor Cheek is in his third year with the Roadrunners. He has scored 127 minor-league goals.