LAS VEGAS — The 2018-19 Arizona Wildcats have only won three games since Jan. 19 and it likely will stay that way.

In a 78-65 loss to USC in the first round of the Pac-12 Tournament on Wednesday, the Wildcats went out with the same sort of issues that plagued them during a seven-game losing streak from Jan. 24 to Feb. 17. That is, poor shooting, turnovers and shaky defense.

USC shot 48.3 percent overall and converted 12 UA turnovers into 17 points, while the Wildcats’ shooting dropped off dramatically after a first half that ended in a 40-40 tie. UA shot just 28.9 percent from the field through the first 18 minutes of the second half, and had made just 2 of 13 3-pointers to that point.

Arizona shot 40.4 percent for the game but made only 5 of 22 3-pointers, a 22.7 percent rate that wasn't nearly enough to keep them competitive for much of the game.

UA shot similarly poorly on Jan. 24, when they began their seven-game losing streak in an 80-57 loss at USC, hitting just 27.8 percent from the field in that game. But the Wildcats were playing that game without center Chase Jeter, who had injured his back on Jan. 19 against Oregon State.

This time, Jeter had six points and seven rebounds but shot just 2 of 8 from the floor. Arizona was led by Ryan Luther, who had 16 points on 7-for-11 shooting, while Brandon Williams had 13 points and six rebounds.

The loss likely finished Arizona’s season at 17-15, the Wildcats’ worst record since coach Sean Miller’s first Arizona team that went 16-15 in 2009-10. The Trojans improved to 16-16 and will play top-seeded Washington in a Pac-12 Tournament quarterfinal game on Thursday.

It will be only the third time the Wildcats have missed the NCAA Tournament field in the last 35 seasons, though Arizona also had to vacate its 1999 and 2008 appearances because of NCAA violations.

In the first half, the Wildcats committed seven turnovers that turned into 10 USC points and allowed the Trojans to shoot 47.1 percent but managed to shoot 50 percent themselves.

Williams, starting for the first time since his knee flared up in January, led the Wildcats with 11 points and five rebounds. Williams also had only one foul after having 13 over his past three games.

While USC took leads of up to 11 points midway through the second half, UA cut it to 35-31 on a jumper from Justin Coleman with 3:06 left and kept cutting it closer until Brandon Randolph gave them a brief 40-32 lead on a layup with 32 seconds left.

Miller actually took Randolph out of the starting lineup for the first time this season, and without him, the Wildcats took a 10-5 lead at the first media timeout.

Over those first four minutes, UA held USC to 2-for-9 shooting, didn’t commit a turnover, while Williams hit a 3 pointer and didn’t pick up a foul.

However, things fell apart in the next segment. The Wildcats committed four turnovers in a period of just three minutes and 11 seconds, leading to several USC scores.

After Boatwright hit a 3-pointer to give USC a 13-12 lead, Derryck Thornton stole the ball from Williams and went in for a layup to make it 15-12.

On the Wildcats’ next possession, Kevin Porter blocked Luther’s jumper and later hit a 3-pointer to put the Trojans ahead by six. Then Thornton stole it from Dylan Smith and made another layup to give USC a 20-12 lead.

While Miller appeared to be trying to light a fire under Randolph, it didn’t work initially. Shortly after entering the game, Randolph threw up a badly missing 17-footer and then was called for a blocking foul on the other end when he was out of control defensively.

Randolph finished with two points on 1-for-6 shooting in the first half.

Loss to USC in the first round in Las Vegas puts a cap on one of the strangest seasons in recent memory.

Greg Hansen: Wildcats' worst season in decades ends with dignity, a handshake and a look ahead

This was, at best, a 17-win team. Miller parked it in the garage with exactly 17 wins.

See how USC made Pac-12 Tournament history in Las Vegas with its win over Arizona, how much Larry Scott's hotel suite is worth, and what Richa…

Arizona's season came to a close Wednesday in Las Vegas when it lost the USC Trojans 78-65 in the first round of the Pac-12 Tournament. The Wi…

The Star's Bruce Pascoe previews all of the game day essentials in Las Vegas, from projected starting lineups to storylines and series history.

The Star's Bruce Pascoe sets the table for the Pac-12 Tournament in Las Vegas.

The redshirt junior has a 3.54 GPA and has already graduated from Arizona.

During a news conference Monday, UA's coach addressed his Senior Day speech which drew speculation of a goodbye.

Justin Spears and Dominic Baciocco provide an outlook of the entire Pac-12 Tournament and postseason accolades. What will it take for the Ariz…

Among the few items of good news for the Arizona Wildcats in their loss Saturday to ASU, it was that center Chase Jeter may be pretty close to…

The center missed the first game against the Trojans this year, when UA lost by 23. The teams rematch Wednesday in Las Vegas. 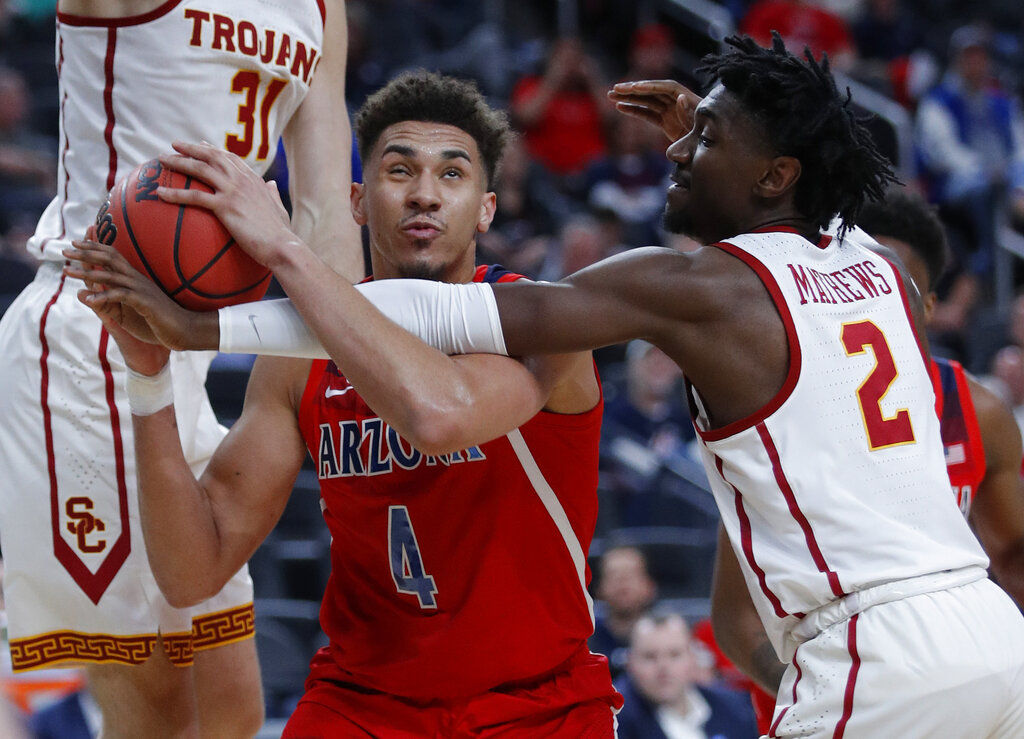 Southern California's Jonah Mathews, right, reaches in against Arizona's Chase Jeter (4) during the second half of an NCAA college basketball game in the first round of the Pac-12 men's tournament Wednesday, March 13, 2019, in Las Vegas. (AP Photo/John Locher) 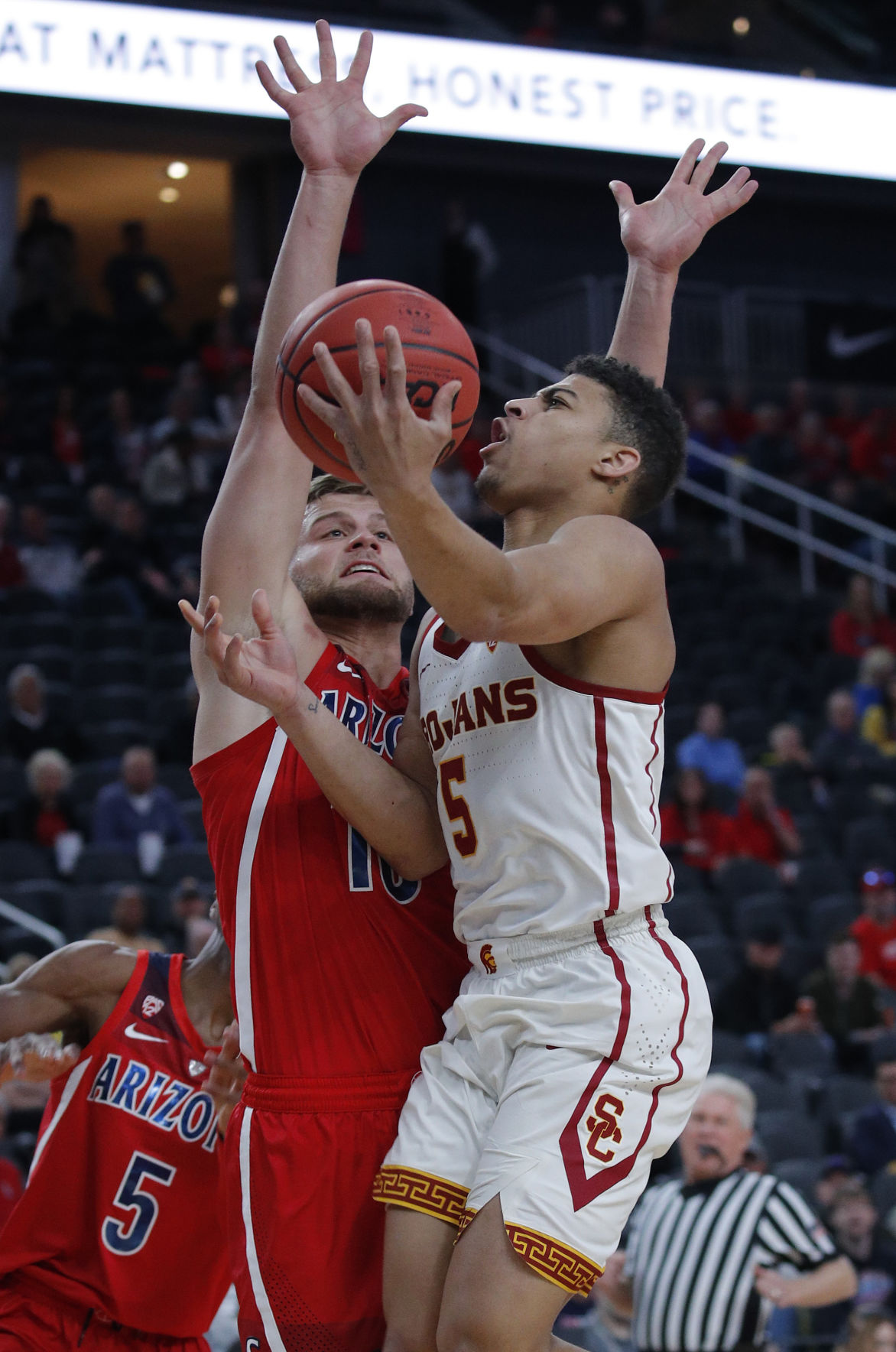 Southern California's Derryck Thornton, right, shoots against Arizona's Ryan Luther during the first half of an NCAA college basketball game in the first round of the Pac-12 conference tournament Wednesday, March 13, 2019, in Las Vegas.