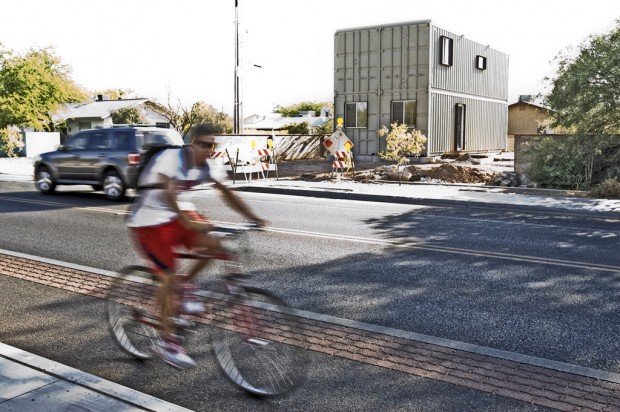 Four steel shipping containers have been stacked in the 3700 block of North Mountain Avenue to create a two-story, two-bedroom home. It's not prohibited under city codes, but some residents don't want the house in their neighborhood. 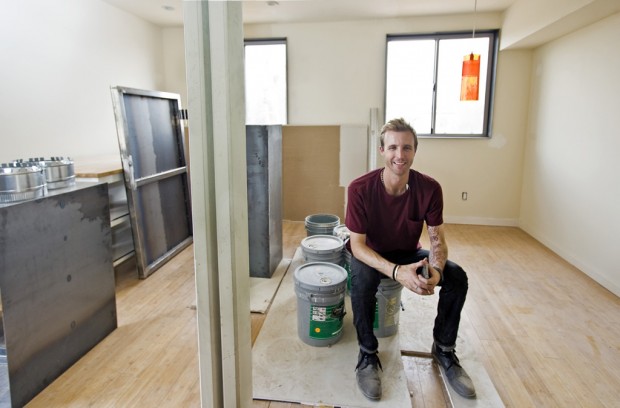 Designer Jason Anderson sat Tuesday among building materials in the home's living room, which has bamboo floors and energy-efficient appliances. 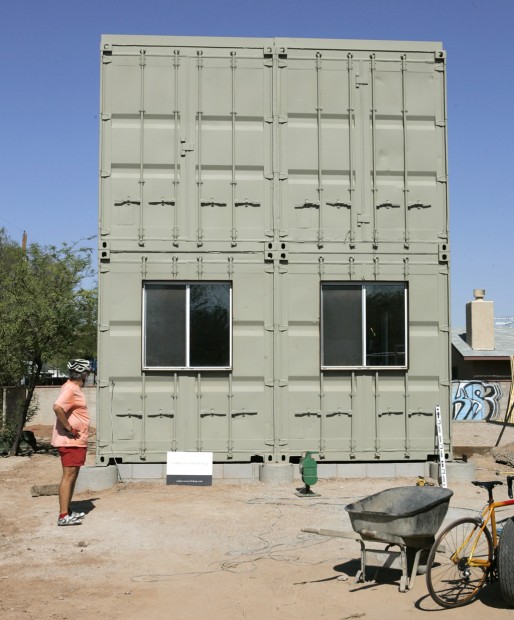 Architect Pat Payne said he loves the house and thinks other architects will, too. 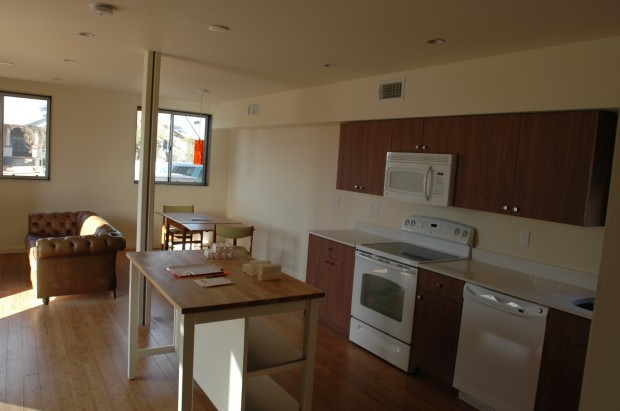 The home made of shipping containers now at 3734 N. Mountain Ave. was furnished when it was in Phoenix for the U.S. Green Building Council expo in 2009. It features Grohe fixtures and bamboo floors. 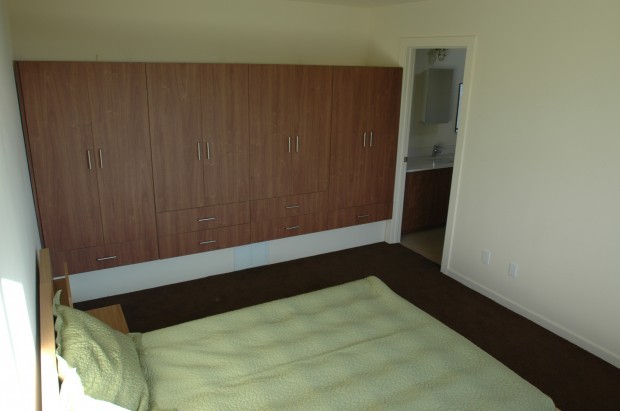 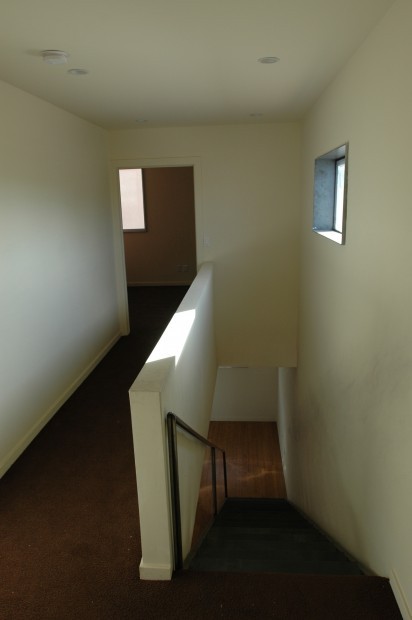 A sleek steel staircase connects the floors of the home made of shipping containers at 3734 N. Mountain Ave.

A new home on Tucson's north side represents a global design trend toward building inexpensive modular homes from recycled materials.

The house, at 3734 N. Mountain Ave. south of East Roger Road, is believed to be the first in Tucson to be built from steel shipping containers.

Four cargo containers have been stacked to create a two-story, two-bedroom home on a lot half the size of most parcels in the 1950s-era neighborhood. Houses like it are intended to be cheap, quick to build and easy to fit into dense urban environments.

Still, several residents of the Campus Farms neighborhood have protested since a crane dropped the containers on the lot, with proper city and state approvals, in May.

They say the home is ugly and inappropriate for its location, and they worry that it may be unsafe. One neighbor, Bonnie Poulos, described the home in a letter to the City Council as looking like "a bulletproof meth house."

But reactions haven't been all negative. When architect and zoo-exhibit designer Pat Payne saw it from his bike, he stopped because he thought it was inspiring.

"It looked fun and innovative," he said. "It looked like they'd done a good job."

He found neighbor opposition unsurprising. "I think any architect who does anything unusual expects that," Payne said. "There's a big industry in prefab homes, and this is not the first time shipping containers have been used for a home."

In fact, people have been making homes - even office buildings and apartment complexes - from shipping containers since at least the 1970s. But because it's a first for Tucson, neighbors and city regulators are rushing to decipher the rules.

A community conversation about this type of housing is slated for sometime this summer.

Councilwoman Karin Uhlich requested the public meeting with the builder, UpCycle Living LLC - a partnership of local designer Jason Anderson and Phoenix-based Ashton Wolfswinkel, son of mega-developer Conley Wolfswinkel - as well as representatives of the city's Planning and Development Services Department, neighbors and other interested Tucsonans.

That's what Poulos was hoping for. "I see a place for these, I really do," the longtime neighborhood activist said. "But it's an inappropriate design for a site-built neighborhood."

"We want to have a community discussion before more people jump on the bandwagon," she said.

Not much city can do about regulating container homes

It's clear that local interest in these homes is rising.

Upcycle Living, which built and owns the Mountain Avenue home, has been contacted by several people hoping to rent or buy it. And the Inter-modal Steel Building Association, a building-industry group promoting container homes, has 26 Tucson members.

So far, the city has said that there's little it can do to halt or realign the trend. "It's pretty straightforward from our perspective," said Ernie Duarte, director of Development Services. Modular homes are allowed in areas zoned for residential use. Duarte is looking into what other cities are doing to regulate these homes, but he doubts he has much leeway.

City officials are constrained by fair-housing legislation as well as Proposition 207, which Arizona voters approved in 2006 to require compensation to property owners for changes in land-use laws that diminish the potential value of property.

Ensuring safety is also out of the city's hands. The shipping containers are modified in a factory and thus are considered factory-built buildings, which fall under state regulation.

The Arizona Office of Manufactured Housing in the Department of Fire, Building and Life Safety reviews the plans, which must be submitted by an engineer registered in the state.

Officials inspect the components before and after they are put together to ensure they conform to the International Residential Code, which stick-built homes but not mobile homes, must meet.

Upcycle Living got all the necessary licenses and permits, said Debra Blake, deputy director of the Office of Manufactured Housing.

Inspections on the recent installation have not been completed, and the city is following up on a list of possible violations to the floodplain permit that another neighbor submitted.

Jason Anderson, a local designer and partner in Upcycle Living, says he didn't set out to be controversial.

The house was first put together almost five years ago as an experiment requested by then Phoenix Mayor Phil Gordon, he said.

Phoenix was hosting the U.S. Green Building Council, and Anderson and his partner had already been using shipping containers to make dormitories for Haitian orphans. "This was just a project we did to see if we could do it," he said.

For Anderson, the design was about the interaction of economics, speed and quality. His goal was to make a low-cost house using durable, recycled materials.

"This is not the cheap stuff I could have used," he said, opening the steel mailbox for the house's new Tucson address.

Anderson considered moving the 1,280-square-foot house to Flagstaff or Tempe from its temporary pad in Phoenix, but he decided on Tucson because he found a lot that seemed to work and he's passionate about making a difference back on his home turf.

"You have an infill lot. You have to be creative," the Salpointe High School and University of Arizona graduate said. "This is basically what you could fit here."

At 5,800 square feet, the previously subdivided lot was not big enough for a home like others in the area because of setbacks. It is across the street from another two-story building, so Anderson figured there were no problems.

Then, neighbors started coming over. Tony Peeters, who lives nearby on Ellis Street, was one of them.

He's a carpenter who in earlier career iterations was an environmental activist and a contractor involved in investigating the possible use of shipping containers for housing troops in Kuwait in the 1990s.

"It makes sense in some emergency situations," Peeters said, but he advised against it for troops in part because he worried about the toxicity of materials used to make and fumigate the containers and those later transported inside.

Among the substances he's concerned about are lead-based and zinc-chromate paints, arsenic and chromium - substances not included in state inspections.

Peeters wants the city to pass an ordinance to protect citizens from hazards and the city from legal liability.

Anderson thinks the concerns are overblown. He reviewed logs of the containers' journeys and performed environmental tests on the paint and floorboards.

The containers were cleaned, ground, sandblasted, primed and sealed, he said. The original floorboards are covered by a thick layer of plywood and then a finish of bamboo flooring.

Debates like these will be part of the community talks.

So, some hope, will be a conversation about appropriate housing imbued with a sense of history.

Albert Elias, director of the city's Housing and Community Development Department, points out that homes in Tucson have always reflected the availability of building materials at the time - from mud to the timber and bricks brought by the rails, to the steel and concrete that marked Modernism. Building plans and techniques adapt and adjust those materials to local conditions, he said.

"The question to ask ourselves is, 'What are people looking for?' " Elias said. In buying or renting homes made of shipping containers, "people are looking for something, and we need to listen to that carefully as a city and understand what those things are."

That won't necessarily be an easy conversation.

"I'm committed to having those discussions," Anderson said. "But that's a tough dialogue."

Roger Rosecrans, a neighbor and longtime Realtor, has warned that he has some choice words for Anderson.

"If you think this is going to be a cordial little kumbaya session, you'd better think again," he said. "If I lived next door, I'd be sending hate mail."

Anderson plans to finish construction - including the installation of a perforated metal sunshade on the exterior of the building and the planting of mature native trees in the yard - within weeks. In July, a renter is scheduled to move in.

Shipping container homes are inspected by the state because they qualify as modular homes - but cities and counties can decide to allow them or exclude them in their zoning codes.

They are allowed in residential zones inside Tucson's city limits, but not in unincorporated Pima County.

"Cargo containers are permitted in all zones only in conjunction with an approved commercial development plan," said Pima Country Planning Director Arlan Colton.

While it's possible that shipping containers could be used as homes under a commercial proposal, the county hasn't yet seen such a proposal put forward, Colton said.

"I think any architect who does anything unusual expects that. There's a big industry in pre-fab homes, and this is not the first time shipping containers have been used for a home."

Four steel shipping containers have been stacked in the 3700 block of North Mountain Avenue to create a two-story, two-bedroom home. It's not prohibited under city codes, but some residents don't want the house in their neighborhood.

Designer Jason Anderson sat Tuesday among building materials in the home's living room, which has bamboo floors and energy-efficient appliances.

Architect Pat Payne said he loves the house and thinks other architects will, too.

The home made of shipping containers now at 3734 N. Mountain Ave. was furnished when it was in Phoenix for the U.S. Green Building Council expo in 2009. It features Grohe fixtures and bamboo floors.

A sleek steel staircase connects the floors of the home made of shipping containers at 3734 N. Mountain Ave.