The first building housing University of Arizona operations is finally going up at The Bridges development on Tucson’s south side, with steel girders reaching to the sky.

But the building, dubbed The Refinery, is altogether different – and will hopefully meet more success – than what was originally envisioned as a UA-led biotech business park more than a decade ago.

The Boyer Co. will build and own the four-story 120,000-square foot building, at a current projected cost of about $30 million, and when it is completed late next summer, the UA will lease half that space for Tech Launch Arizona and other growing technology enterprises.

The first UA building at The Bridges was proposed as a combined office and lab building with an estimated price tag of $40 million to be split by the UA and Pima County, through a bond issue.

But when voters rejected the Pima bond in 2015, the UA began looking for a private partner to develop the first university-purposed building at UA Tech Park at The Bridges, near East 36th Street and South Kino Parkway.

In 2018, Bourn Cos., owner and developer of a commercial district at The Bridges, inked a deal with insurance giant Geico to build a regional office at site. Geico opened the three-story, 200,000-square foot building in 2019 as home to about 1,500 workers.

But aside from adjacent retail and restaurant development, the original UA BioPark concept, including a cluster of research buildings and a hotel, never reached full fruition.

Carol Stewart, UA associate vice president for Tech Parks Arizona, said she realized when she arrived at the UA in January 2019 that a new approach was needed for the building.

“It was really important to me to take this project and reverse-engineer it into something that was market-sensible,” said Stewart, who founded and ran a successful tech park at the University of Waterloo in Canada.

That meant keeping leasing costs at sustainable, market rates for both the UA and companies that want to take up residence at The Refinery to collaborate with the school, she said.

“We didn’t want (cost) to be a barrier, to build something that’s not marketable,” Stewart said.

The UA has signed two leases for its 60,000-square-foot space at The Refinery, a 10-year lease for 45,000 square feet of basic office space and a 20-year lease for 15,000 square foot of secured space for the UA Applied Research Corp., a nonprofit formed by the UA to conduct aerospace and defense research.

The UA expects to pay about $25.48 per square foot for its space, including tenant improvements, a little higher than the current Tucson metro average of about $24 for Class A office space but within the UA’s budget guidelines.

While the UA will be the anchor tenant, the school is not making any capital outlay for The Refinery, Stewart noted.

“There’s no taxpayer money funding this building, this is a private developer funding the building,” she said.

Boyer Co. partner Matt Jensen said the Salt Lake City-based developer worked closely with the university to keep the space affordable for the UA and prospective private tenants alike, praising the school for signing the final contracts in March despite the COVID-19 pandemic.

While the pandemic has complicated matters — prompting some design changes to keep spaces safe — Jensen said the company is seeing some interest in the new building.

“We’ve had some decent interest,” he said. “They would really like the building to be focused on technology and companies that want some affiliation with the university.”

Stewart noted that under the tech-park guidelines the UA is looking for co-tenants at The Refinery that will create opportunities for students and graduates, startup or relocating research-based companies and tenants that will contribute to the economic and social health of the surrounding community.

While Jensen said that while marketing a new building amid the pandemic is tough, the timing could be right if the COVID-19 crisis is over by the time the building is slated to open next summer.

“I do think the timing could be good. A lot of companies have to come to grips with (COVID-19) and are saying, ‘This is how we will operate, but at the same time we need to expand and get back to work,” he said.

Construction of The Refinery is creating local jobs. Boyer hired Tucson-based Swaim Associates Architects for the building design, and the Tucson office of Core Construction, which was based in Phoenix until moving its headquarters to Texas in 2018, is general contractor.

Stewart said she’s confident that demand for space in The Refinery will rebound with the office market in general.

“We’re seeing inquires out of state never seen before, both the coasts are looking at Arizona, because of the (lower) cost of doing business here and the lack of natural disasters,” she said.

Meanwhile, Stewart said that Tucson-based HSL Properties recently informed the UA that it is pausing development of a 120-room hotel at The Bridges amid the pandemic.

HSL President Oscar Mireles confirmed that the company has postponed a June groundbreaking for the planned Marriott-branded hotel and now hopes to start sometime in the first quarter of 2021, when he believes financing for such projects will be more available.

“We’re really bullish that the demand will come around,” Stewart said, citing the recent expansion of the nearby Kino Sports Complex. “A hotel is a great thing to have on your sales sheet.”

Besides UA Applied Research Corp., The Refinery will be the new home for Tech Launch Arizona, the UA’s technology commercialization arm, which will take up 12,000 square feet.

The UA Center for Innovation, a tech-oriented business incubator based at the UA Tech Park on South Rita Road, will take up 4,500 square feet.

The UA office of Research, Innovation, Impact, which is led by UA senior vice president Betsy Cantwell and oversees the school’s corporate-engagement program, Tech Launch Arizona, the FORGE business accelerator and the UA research parks, will use 2,500 square feet of space.

Democrat Anna Tovar is leading but Republicans have so far outpolled the other two Democrats, likely dashing hopes of a Democrat majority on the utility panel.

Near Cortaro Road and Hartman Lane, 251 one- and two-story homes are going up. They will feature KB Home's new dedicated office space option for the work-from-home buyer.

Three floors of the the high-rise building are designated for office space despite a shift to remote work as a result of COVID-19 pandemic.

Tucson had the second-highest ranking for home affordability among peer Western cities in 2019, though the pandemic has affected affordability recently, according to the University of Arizona's Making Action Possible Dashboard.

The demolition of an old medical complex next to St. Mary's Hospital is unveiling a new pavilion with updated clinical space on Tucson's west side.

The Arizona Corporation Commission rules mandate 100% carbon-free power by 2050, but the panel rejected a specific mandate for renewable energy like solar and wind. 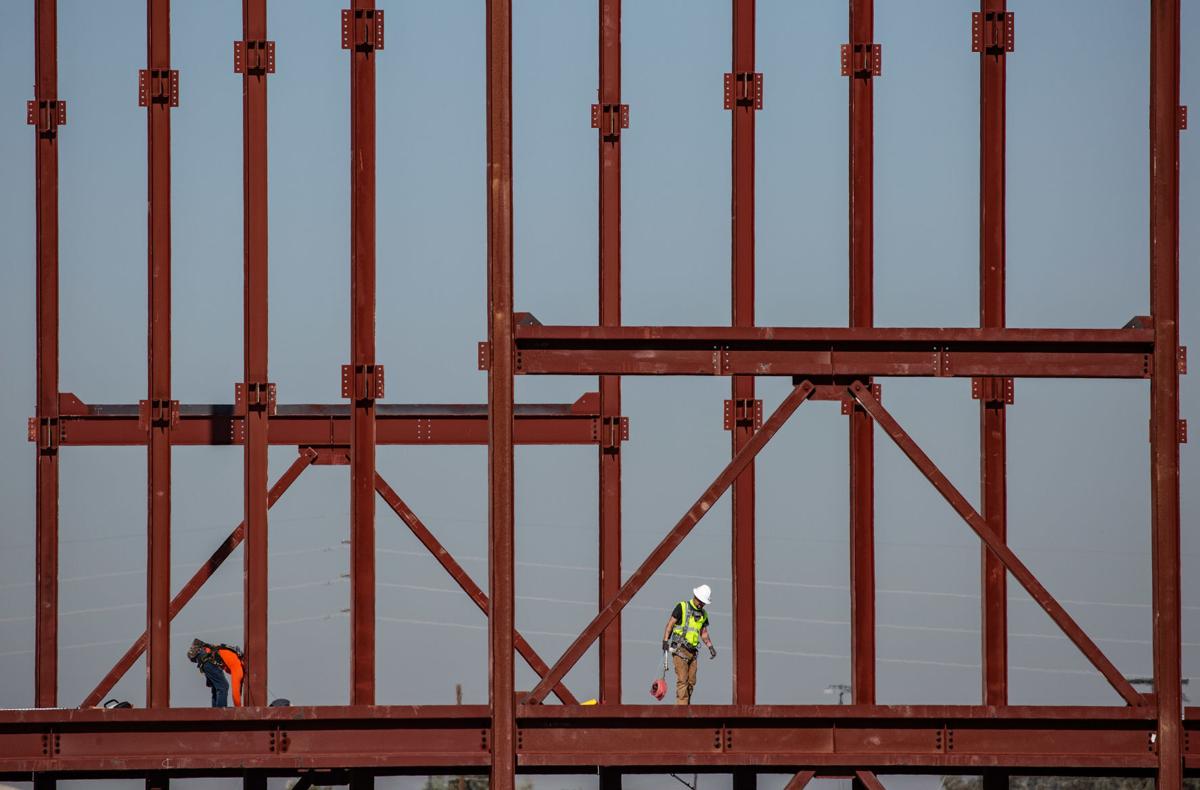 Construction crews work on The Refinery, a four-story University of Arizona research building being raised at The Bridges near 36th Street and Kino Parkway. The university, which will be the anchor tenant, has signed two leases for 60,000 square feet of space. 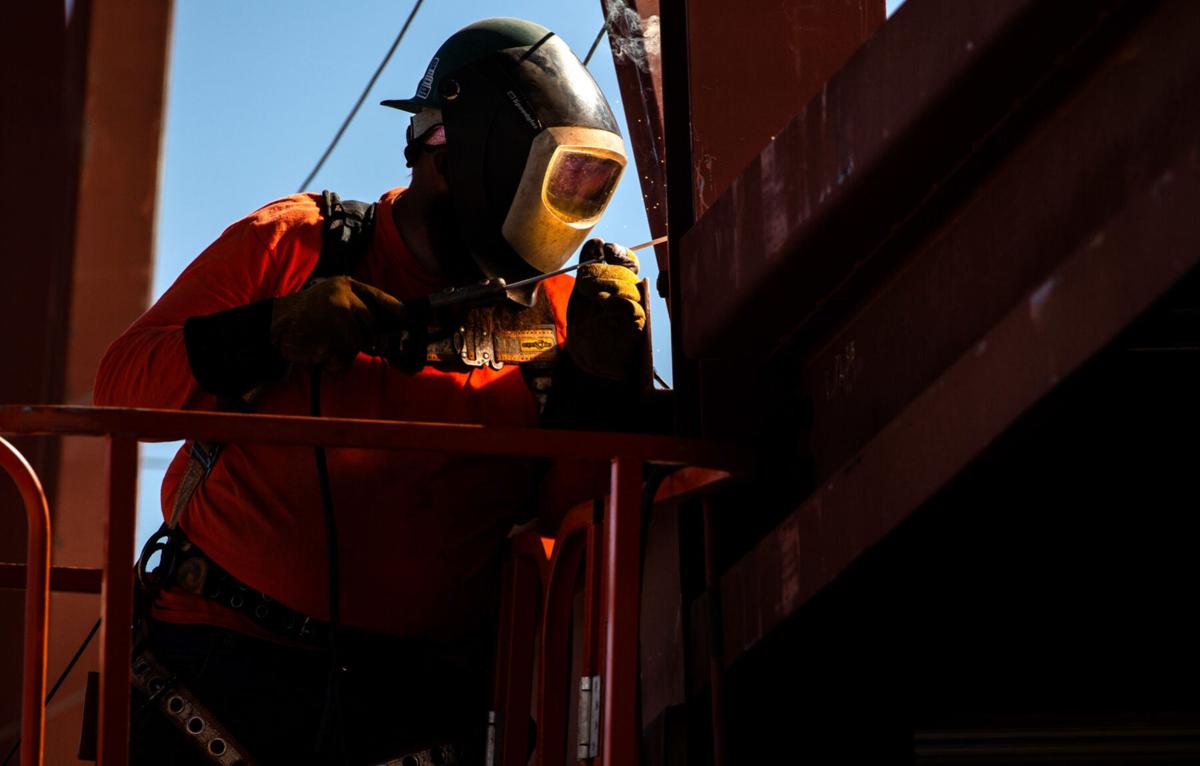 A construction worker welds around the frame of The Refinery. The University of Arizona will lease half of the space for Tech Launch Arizona and other growing technology enterprises. 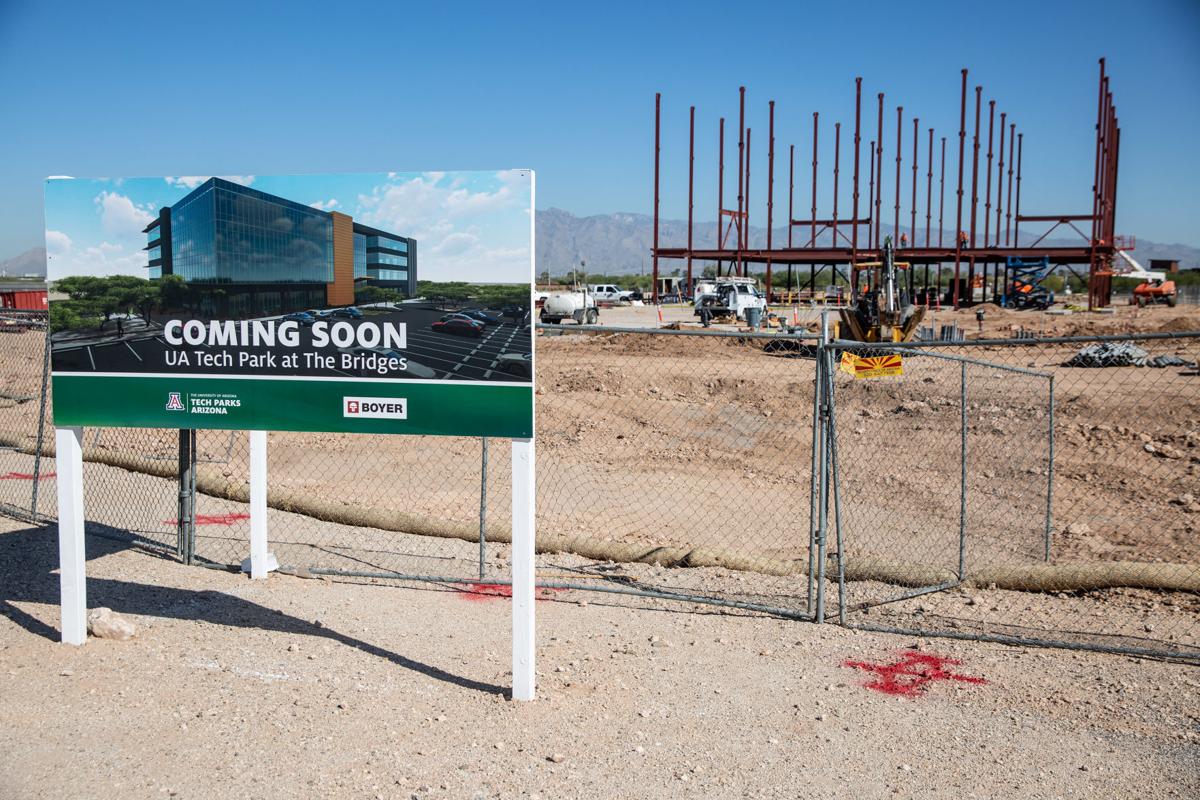 A sign previews The Refinery near 36th Street and Kino Parkway. Tech Parks Arizona says it had to “reverse-engineer it into something that was market-sensible.” The UA is not making any capital outlay for the project.