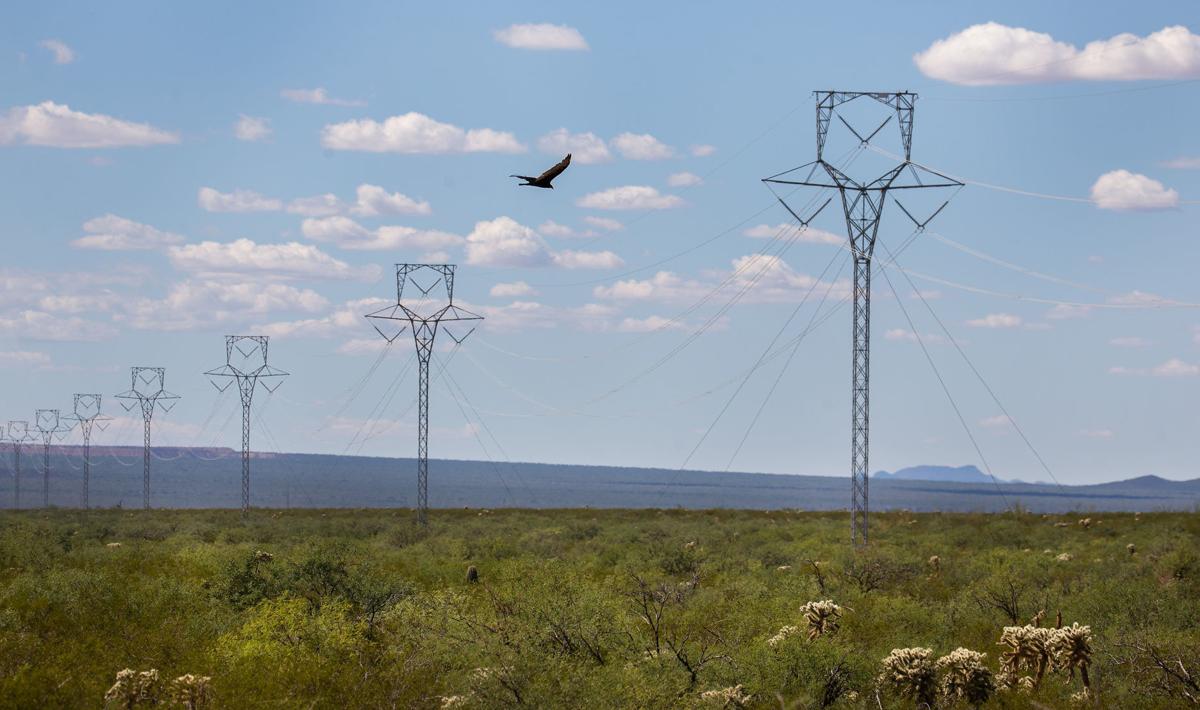 The Wilmot Energy Center will be built near these transmission lines along South Wilmot Road, stretching to the west past South Swan Road. The 100-megawatt solar farm is expected to produce enough energy to serve 21,000 homes annually.

A power-line project to connect what will be Southern Arizona’s biggest solar-energy farm to Tucson Electric Power Co.’s grid is headed to final approval by state regulators.

The Arizona Corporation Commission must still give its final approval, following the line-siting panel’s approval of a required certificate of environmental compatibility for the project.

The matter is not on the Corporation Commission’s open-meeting agenda for its monthly meeting on Thursday but could be considered at the following open meeting Nov. 7-8.

TEP says the project is needed to transmit power from the Wilmot Energy Center to the proposed new Sonoran Substation and then about another mile and a half to East Old Vail Road. The 1,100-acre solar and storage project is planned for construction in 2020.

The project also will improve reliability for customers in the area and provide for future demand growth, TEP says.

The $7 million project also includes a new switchyard at the southern end of the line that will eventually connect to the solar farm.

The Wilmot Energy Center will be owned and operated by an affiliate of Florida-based NextEra Energy, which will supply TEP under a power-purchase agreement.

When the project was announced in May 2017, TEP said the price of power under the agreement was under 3 cents per kilowatt hour, the lowest in the industry at the time, or under 4.5 cents with battery power included.

The planned lithium-ion storage battery will provide four-hours of extra power for peak demand times in the evening.

“This is really exciting technology, because it allows us to extend the benefits of solar,” said Bryan Garner, a spokesman for NextEra Energy Resources.

Garner said the company — the largest generator of renewable energy in the world — is on track to construct the solar and energy-storage plant in 2020 and switch it online by the end of that year.

The path of the proposed transmission line runs across land owned by the Tucson Airport Authority and a land investment company, and past a small subdivision on the east side. Existing power lines run along the east side of South Swan.

TEP says it worked with TAA and the landowners on the preferred route approved by the state line-siting committee, though Pima County objected to part of the northern route favored by the airport on grounds it could interfere with future plans for a connecting highway to I-10 as part of the Sonoran Corridor economic-development plan.

TEP spokesman Joe Barrios said the company received little feedback from residents in the area and no significant opposition.

The utility said it sent notices to more than 16,000 residents in the larger region of the project and after two public meetings it received 21 comments.

TEP said 10 residents stated a route preference and about a third cited health concerns related to radiation from the transmission lines, with no overwhelming opposition or support for any route alternatives.

TEP commissioned studies showing the project would not have a significant impact on wildlife and that expected electromagnetic radiation from the lines would be at safe levels, at a fraction of that emitted by microwave ovens and other home appliances.

For more information on the project, go to tep.com/sonoran-to-wilmot.

The utility argues the measure would dramatically increase costs for consumers and prompt the premature closure of fossil-fuel plants, including the TEP-owned Springerville Generating Station.

TEP gets approval to install natural-gas engines despite environmentalists' concerns

Ten natural-gas engines will be installed at the H.Wilson Sundt Generating Station.

The upgrades will help TEP better handle outages and support other efforts.

The festival works to promote, foster and celebrate a culture of innovation.

Arizona's Prop. 127: A push by health officials; a utility regulator seeks a 'no'

If approved by voters, Prop. 127 would constitutionally require most utilities to generate at least 50 percent of their power from renewable sources by 2030.

The father of an 18-year-old is accused in the killing of Vashaun Baker after he admitted fighting with the teen during a basketball game.

Some 50 homes and public buildings on Tohono O'odham land have been assessed for storm damage, officials say.

If you haven't noticed, the weather has been a lot cooler in Tucson lately.

Woman, 19, shot by deputy at Tucson Burger King is jailed on suspicion of attempted murder

A woman was shot by a Pima County sheriff’s deputy as she fought with a man outside a Tucson Burger King on Wednesday, authorities say.

A man's body was found in a wash on West Miracle Mile near North Oracle Road, officials say.

Robert Alfred, 59, was crossing North First Avenue outside of a crosswalk when a southbound Hyundai Santa Fe struck him.

The Wilmot Energy Center will be built near these transmission lines along South Wilmot Road, stretching to the west past South Swan Road. The 100-megawatt solar farm is expected to produce enough energy to serve 21,000 homes annually.