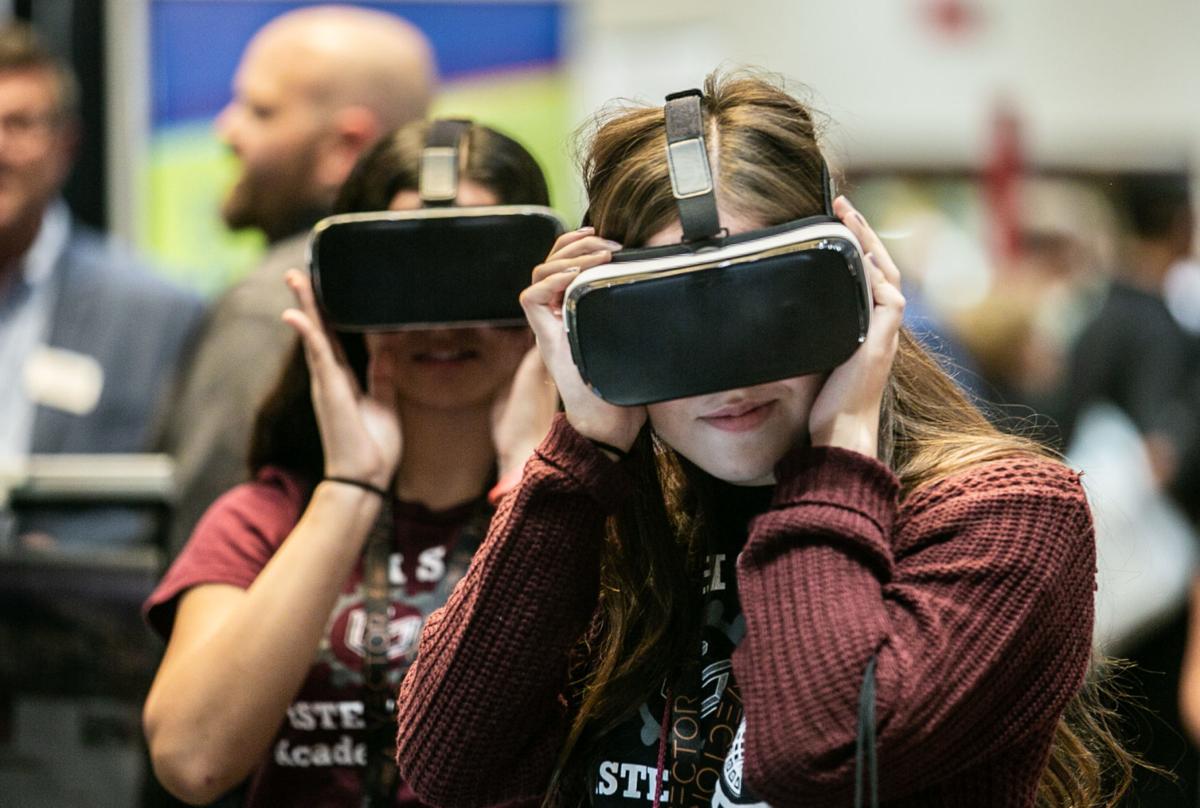 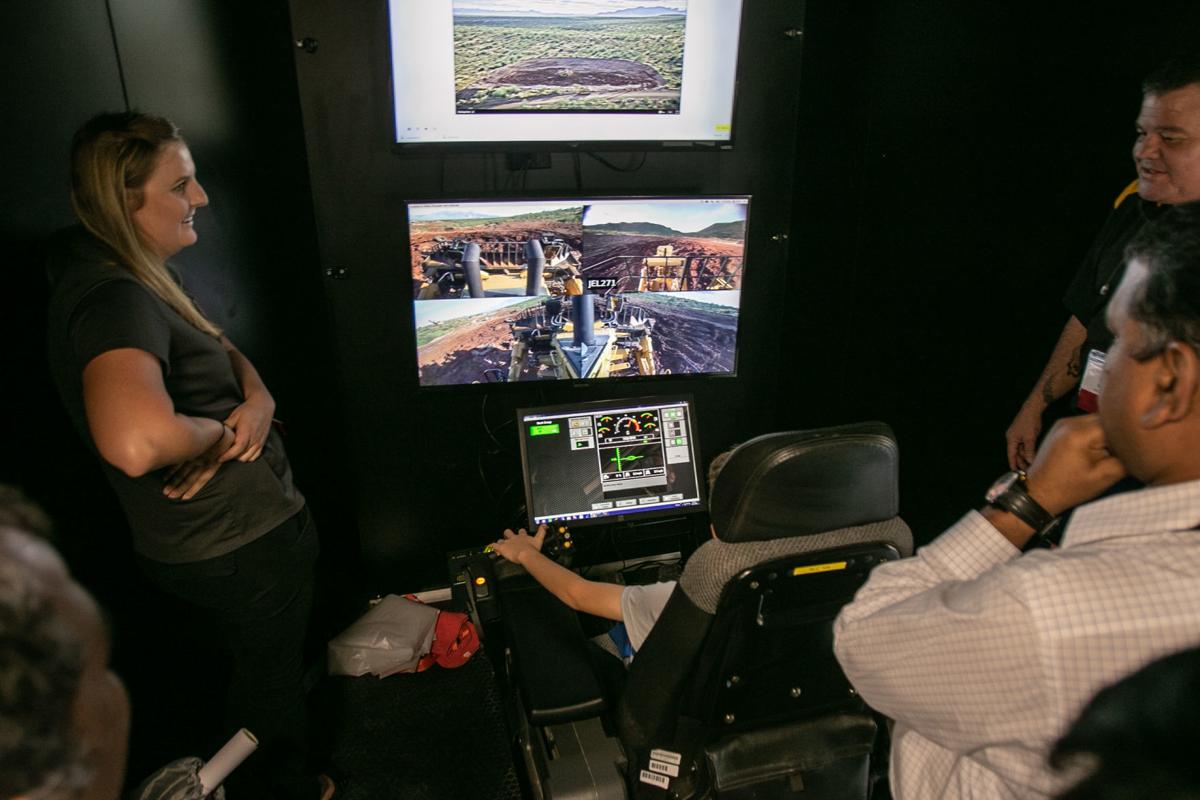 Caterpillar let some of the 400 expo attendees remotely pilot a D11GT bulldozer located at the company’s Green Valley demonstration facility.

New technologies including artificial intelligence and 3-D printing are transforming the aerospace industry — and those flying cars may not be too far off in the future, aviation experts said Wednesday at the 2018 Southern Arizona Tech + Business Expo.

The sixth annual expo held by the Arizona Technology Council attracted more than 400 attendees and more than 60 exhibitors to the Tucson Convention Center.

During a keynote speech, the head of a major trade group for general-aviation aircraft companies said major companies including Airbus and Boeing are investing in additive manufacturing using sophisticated 3-D printers.

The technology, which involves building up layers of metal rather than casting or machining parts, can drastically cut the number of parts and manufacturing steps and produce lighter parts, said Peter Bunce, president and CEO of the General Aviation Manufacturers Association.

Other cutting-edge technologies are being combined to improve navigation, he said.

For example, Bunce said, Tucson-based Universal Avionics, which was acquired earlier this year by Israeli tech giant Elbit Systems Ltd., is working on a visor-like transparent display that combines terrain data, infrared imaging and LED lighting to create a civilian version of the heads-up displays now used on some military aircraft.

The development of new technologies to handle some tasks now handled manually by pilots could help address a worsening pilot shortage while helping to foster a new generation of aviation workers, Bunce said.

“This is going to attract young people back into our industry because this is cutting-edge, it’s exciting, it’s jazzy,” he said.

During his remarks, retired Boeing Co. executive Mark Van Tine said the aviation industry is going through a technological transformation driven by the ongoing modernization of the National Airspace System by the Federal Aviation Administration.

Satellite navigation began replacing beacon-based navigation in the mid-1980s, but the industry is behind on complying with an FAA mandate that requires all planes operating in controlled airspace to have that capability by 2020, Van Tine said.

“This is a technology challenge, but it’s also a business challenge across the industry,” said Van Tine, formerly vice president of digital aviation for Boeing. “The maintenance companies that install these systems have quite a backlog.”

Other promising navigation technologies include performance-based navigation, which can plot the most efficient flight paths to maximize fuel efficiency and avoid traffic conflicts, he said.

Another speaker said Tucson has the right ingredients to become a significant player in the biosciences.

Paul Laikind, president and CEO of San Diego-based ViaCyte and a pioneer in San Diego’s booming biotech industry, said Tucson has a number of promising drug startups, is supported by the University of Arizona, a strong local industry group in the BioIndustry Association of Southern Arizona, and the support of local government and economic-development agencies.

“I think the elements are all here,” said Laikind. “It really comes down to people.”

Brnovich filed suit as an individual, not in his official capacity as Arizona attorney general.

The driver was arrested on federal smuggling charges.

A vote for Tucson's Prop. 463 is a vote for safer roads, economic improvement

At the risk of oversimplification, this is truly a no-brainer: Vote for Prop. 463.

PHOENIX — Maricopa County Sheriff's deputies say they have recovered the body of a woman from a 900-foot well in Goodyear.

Despite all the rain Tucson has received this month (it's the 5th wettest October of all time!), today is expected to be sunny and dry.

Defense Secretary Jim Mattis is expected to sign an order as early as today sending 800 or more troops to the southern border to support the Border Patrol.

Police: Arizona mom accused of killing infant son searched internet for ways to do it

Jenna Folwell, 19, put her son's body in a duffel bag in their apartment before calling police from a park Wednesday to report that a stranger abducted him, police say.

Tucson police detain man they say barricaded himself in an office

A man has been detained after he barricaded himself in a business on North First Avenue near East River Road, officials say.

2 men sought in burglary at Mama's Pizza in Tucson

Tucson police are searching for two men accused of burglarizing a Mama's Famous Pizza & Heroes on the city's east side.

The conservative public policy think tank asked the Arizona Court of Appeals to reverse a decision saying that the $15 million agreement did not violate the state's gift clause laws.

Co-founder and former CEO Jane Poynter will stay on as advisor and board member of the stratospheric balloon company.

Caterpillar let some of the 400 expo attendees remotely pilot a D11GT bulldozer located at the company’s Green Valley demonstration facility.