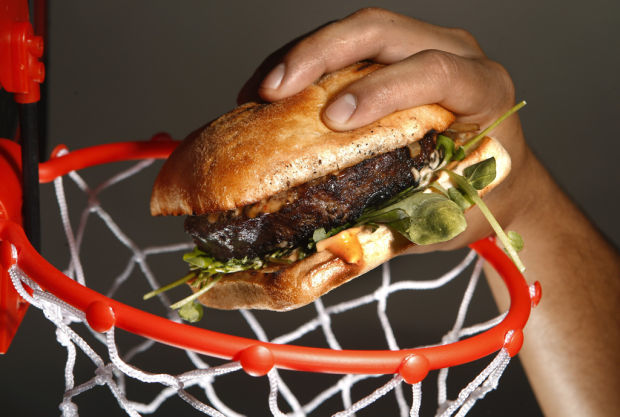 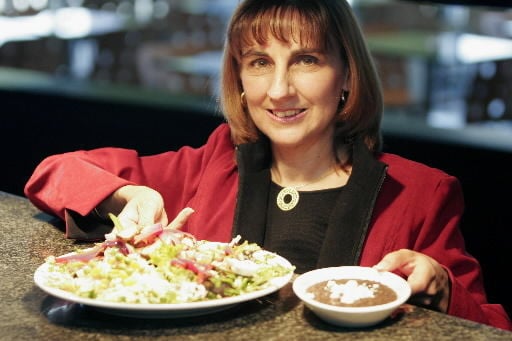 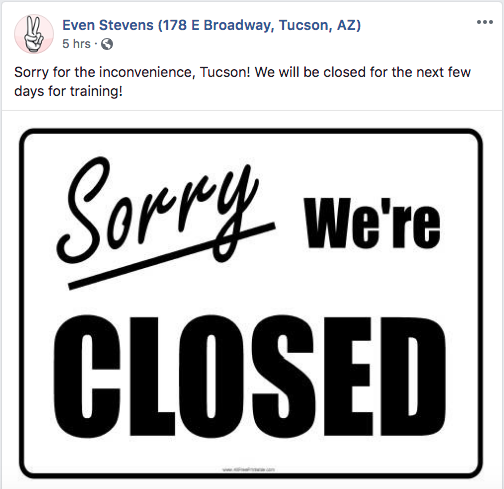 Even Stevens Sandwiches downtown could be open as early as Thursday after a hiccup during a management transition resulted in missed lease payments, a company official said.

Following a dozen-year run, Zivaz Mexican Bistro on East Broadway has closed its doors for good.

The restaurant, recognized by fans in the Arizona Daily Star’s Burger and Burrito Madness competitions, proudly advertised the burger accolade on the side of the building at 4590 E. Broadway for years after the 2013 contest.

The banner was still there on Wednesday when owners Cecilia and Felipe Valenzuela taped a simple note to their front door announcing the closure.

“This summer has been slow. June was not too bad, but July has been very, very slow,” Cecilia Valenzuela said Wednesday afternoon.

The summer slowdown combined with an increase in the state’s minimum wage took a financial toll on the family’s restaurant, she said. Over the last couple of weeks, the pair decided it was time to bow out gracefully “instead of just waiting and seeing what happens,” she said.

“We are sad. We loved Zivaz. We spent most of the time in the restaurant,” Cecilia Valenzuela said. “It’s very sad for us.”

On the west end of Broadway downtown, meanwhile, the employees at Even Stevens Sandwiches at 178 E. Broadway were touting the Utah-based chain’s environmentally friendly carry-out containers on Facebook Wednesday morning.

Hours later, they posted a notice that they were closed “for training” for the next few days.

A company official in Phoenix, where there are several Even Stevens outposts, confirmed the restaurant was actually locked out by its landlord after not paying rent.

The official, who wouldn’t give his name, called the episode embarrassing and said the company hoped to reopen the shop in the next couple of days.

Even Stevens is expected to open its second Tucson shop in a new strip plaza next door to Sam Fox’s sprawling Yard project on East Grant Road. No opening date has been announced.

Tickets are on sale for a handful of interesting shows over the next two months.

Friday's show will more than likely sell out.

7 Ounce Korean Steakhouse is one of two new Korean barbecue eateries in Tucson.

Arizona Republican Jeff Flake is one of two senators trying to force a vote Thursday on their resolution backing the U.S. intelligence communi…

Arizona man found guilty of stealing from US military base

PHOENIX — A former government contractor has been convicted of stealing and selling U.S. military equipment from his Arizona home.

The girl was able to get away and run for help.

The shop will be open until Thursday, July 26.

Anna Mae Blessing has been in jail since her arrest in the July 2 shooting death of 72-year-old Thomas Blessing at the home they shared in Fountain Hills, an affluent Phoenix suburb.

The funds will be used to provide basic writing and reading skills to Tucsonans.

Check out the amount of work hours go into modifying a Ford SUV for the sheriff's department.

Pima County Fleet Services modifies the Sheriff Department's new Ford Explorers. It takes around 50 hours to complete the work for one vehicle…

A 47-year-old man was arrested without incident on Wednesday, police say.

WASHINGTON – Andrew Medway wasn’t sure how his Mesa business was picked to represent Arizona at the White House’s “Made in America Showcase,” …

Expect a new menu when the restaurant reopens after closing July 22 for summer break.

New restaurant breathes life into a building that was once an iconic Tucson burger stand.

For some, moving away from plastic straws is just the beginning.

Food tastings at popular Tucson restaurants are part of the day-long tour.

Owner says they want to focus on her mother's health.

Even Stevens Sandwiches downtown could be open as early as Thursday after a hiccup during a management transition resulted in missed lease payments, a company official said.