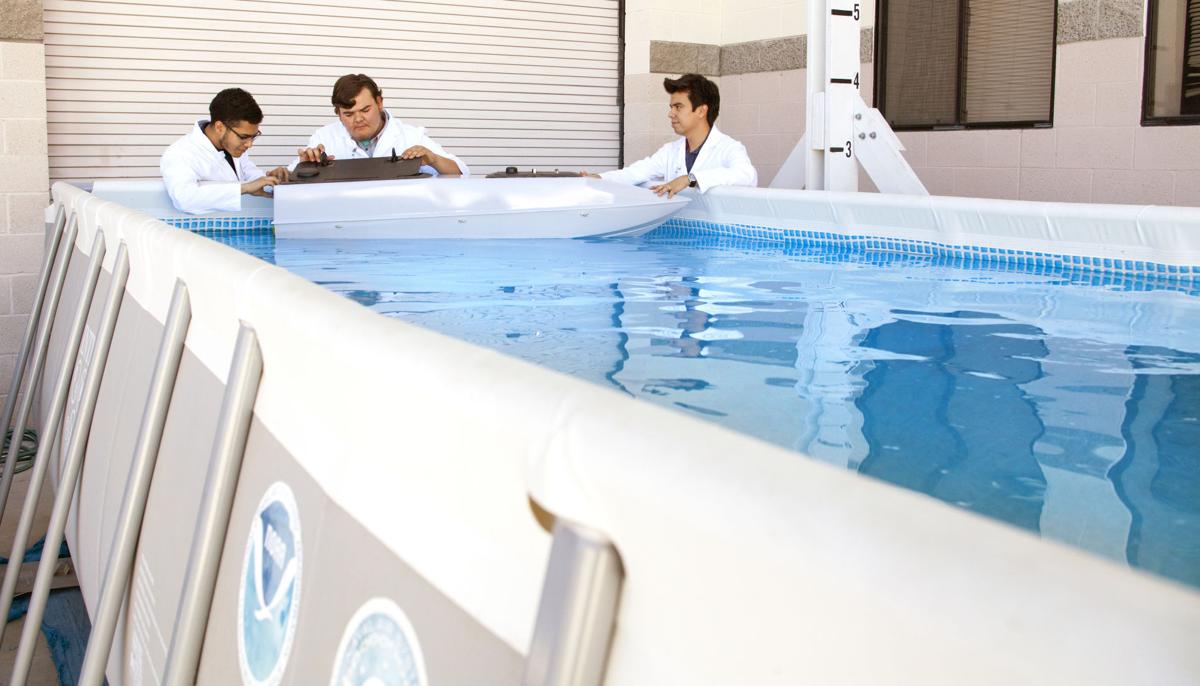 Technicians test a robotic watercraft hull at Hydronalix in Sahuarita.

Tucson has Raytheon and the aerospace and high-tech corridor around the airport, and the UA Tech Park with IBM, Raytheon and other high-tech firms to the southeast.

Now the tiny town of Sahuarita is looking to build its first tech park, the Sahuarita Advanced Manufacturing and Technology Center (SAMTEC) with the help of a $3 million federal grant.

And it has two potential first tenants, both involved in the fast-growing drone industry.

The grant, along with about $1.2 million in matching funds from the town and a $165,000 grant from Freeport McMoRan, will be used to construct a 32,000-square-foot, single-story commercial building on a roughly four-acre lot south of West Sahuarita Road and east of South La Cañada Drive.

The Arizona Commerce Authority provided a Rural Economic Development Grant for a required sewer extension at the project site in 2015.

The town plans to put architectural and design work out to bid in the next month or so and break ground in the first quarter of 2018, with a goal of occupying the center by sometime in mid-2019, said Victor Gonzalez, Sahuarita’s economic-development manager.

SAMTEC is small compared with other tech parks in the region, but Gonzalez said it is an important step as the town with a reputation as a bedroom community seeks to diversify its economy under its long-term strategic growth plan.

“It’s going to be a first for Sahuarita,” he said. “It certainly doesn’t compare to the (UA) Tech Park, but its our way to start to establish a presence that we can retain. And in the long term, this facility becomes an anchor for other types of facilities in this area.”

In a small town dominated by housing — Sahuarita has about 28,000 residents on 32 square miles — two growing high-tech companies stood out, Gonzalez said.

Hydronalix Inc. — a maker of robotic watercraft for rescue and research founded by University of Arizona alumnus and serial entrepreneur Tony Mulligan — was looking for space to grow as it ramps up production.

“We knew that we needed to find a solution to retain those companies in the community,” Gonzalez said.

In late 2015, Sahuarita got the bad news that Freeport McMoRan, a major local employer, was cutting about 500 workers at its nearby Sierrita Mine, citing low copper prices.

“The stars aligned, in a sense,” Gonzalez said, noting that Freeport has provided other grants to help further the town’s economic plan.

The town expects that SAMTEC will attract other companies as suppliers, estimating the project will create 75 new jobs, retain 31 jobs and generate $500,000 in private investment.

Hydronalix has sold hundreds of its EMILY robotic watercraft to first responders for ocean and inland water rescue and similar watercraft to the Navy and the National Oceanic and Atmospheric Administration for research.

But the company is running out of space as demand for its watercraft increases, said Mulligan, who founded Hydronalix shortly after selling his unmanned aircraft company, Advanced Ceramics Research, to defense giant BAE Systems in 2009.

“The SAMTEC park is very important to us because it gives us a place we can expand our production,” Mulligan said. “One of the big problems in the Sahuarita area is there’s no industrial space.”

Mulligan said the company plans to keep its current space in an office park off West Duval Mine Road and add 20,000 square feet at SAMTEC for production and consolidate its supply.

“This let’s us do that, otherwise, we’d have to look seriously at moving to Tucson or another location,” Mulligan said, adding that the company has 24 employees and is hiring nine more.

The former Raytheon engineer and Marine said he has 13 employees who design and make imaging systems that help guide controls for industrial processes like precision casting and welding. He said he plans to hire six or seven more people in the near future.

“We’re growing really fast and the little office space we have in Sahuarita, we’ve outgrown,” said Crawford, recalling how Mulligan helped him launch his then garage-based business in 2011 by giving him some extra space at the time.

Crawford says he lives near Sahuarita and is happy the town is giving him space to grow.

Hydronalix and Control Vision are expected to take up all but about 5,000 square feet of the SAMTEC building, Gonzalez said.

But there is room to expand SAMTEC on the town land and it is part of an undeveloped area, including private land, of about 60 acres that is zoned for business parks.

Freeport to put off closure of Sierrita Mine

Keeping the Green Valley operation open saves 500 jobs for now, even as local officials prepare for the worst.

Val Kilmer is heading to Tombstone to talk about 'Tombstone'

Painting stolen from UA in 1985 recovered; worth up to $160 million

The University of Arizona sent a delegation to New Mexico to examine it and brought the painting back to Tucson.

Gerhard De Beer has come a long way from the days where he didn't know how to properly put on pads as a true freshman playing football for the first time, coach Rich Rodriguez said.

The Pio Decimo Center, an agency of Catholic Community Services of Southern Arizona, announced a scholarship program to help children attend i…

Woman is being held in Pima County jail awaiting extradition.

Owners want to shake the notion that the Oro Valley restaurant is for special occasions.

Miss Saigon pulls out of Marana; construction on Ina, I-10 to blame

She attempted to cross with her young child.

This is despite efforts by tribes to keep their cultures and their languages alive, through immersion schools and tribal programs.

Melanoma not the only serious skin cancer

A type of skin cancer called squamous cell carcinoma (SCC) is increasingly common in the United States, so people need to be alert for signs o…

Monsoon moisture has brought uncommon greenery and color to deserts this summer.

The incident took place at a residence outside McNeal.

Money Manners: Tenants aren't entitled to equity in a property, even when they are family

Ore crusher at mine south of Tucson catches fire

The fire burned for about five hours, no injuries were reported.

Technicians test a robotic watercraft hull at Hydronalix in Sahuarita.