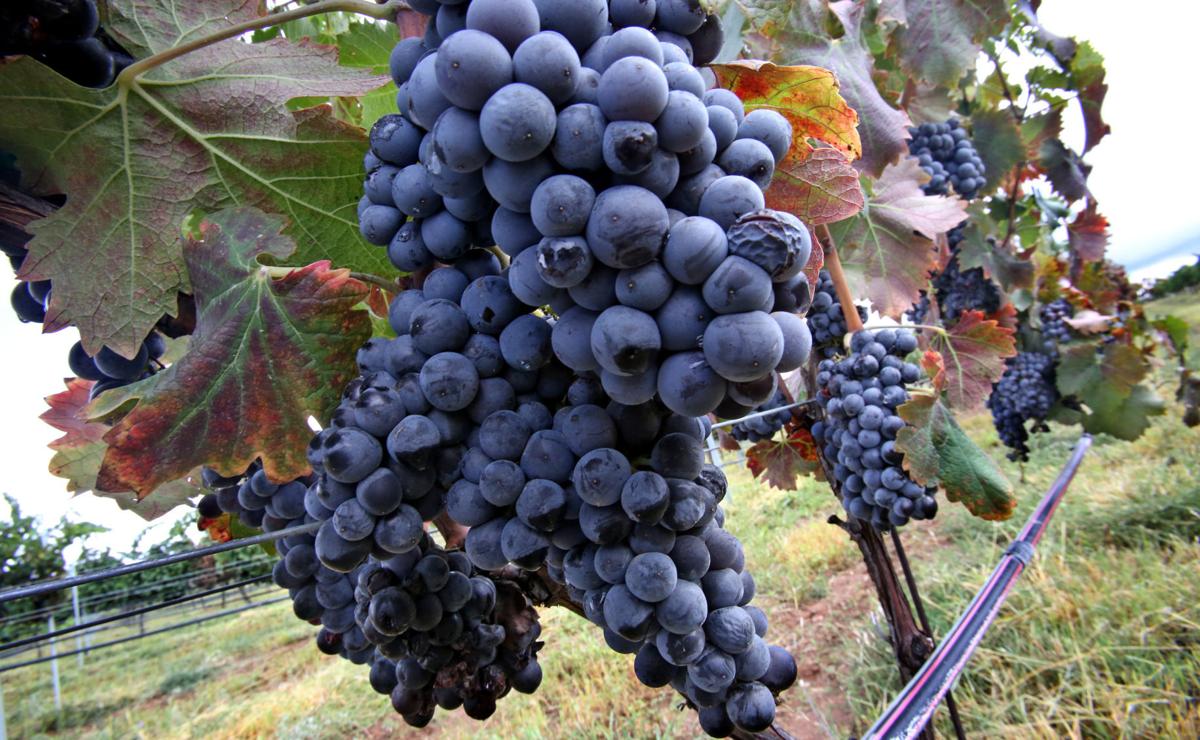 Mourvedre grapes hang on a vine as harvest time nears at Carlson Creek Vineyards outside Willcox. 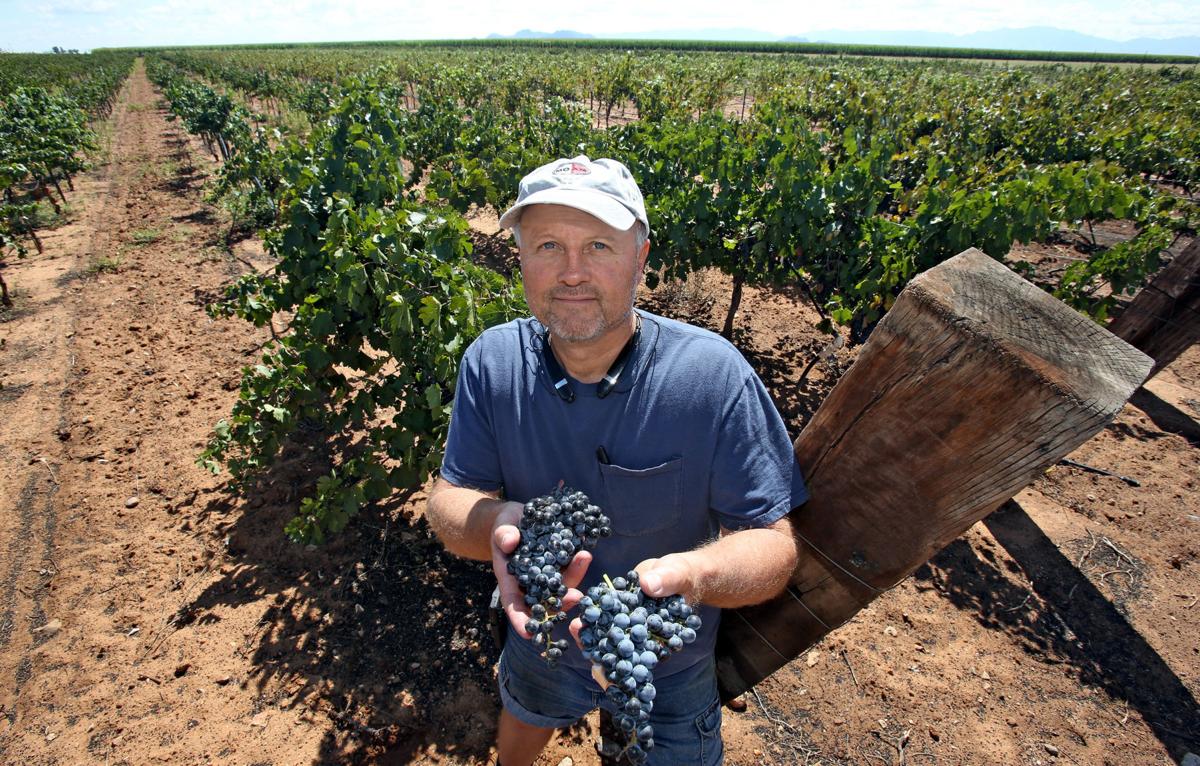 Odyssey Cellars owner John McLaughlin holds some Charbono grapes in his vineyard. Arizona’s other official viticulture area is around Sonoita. 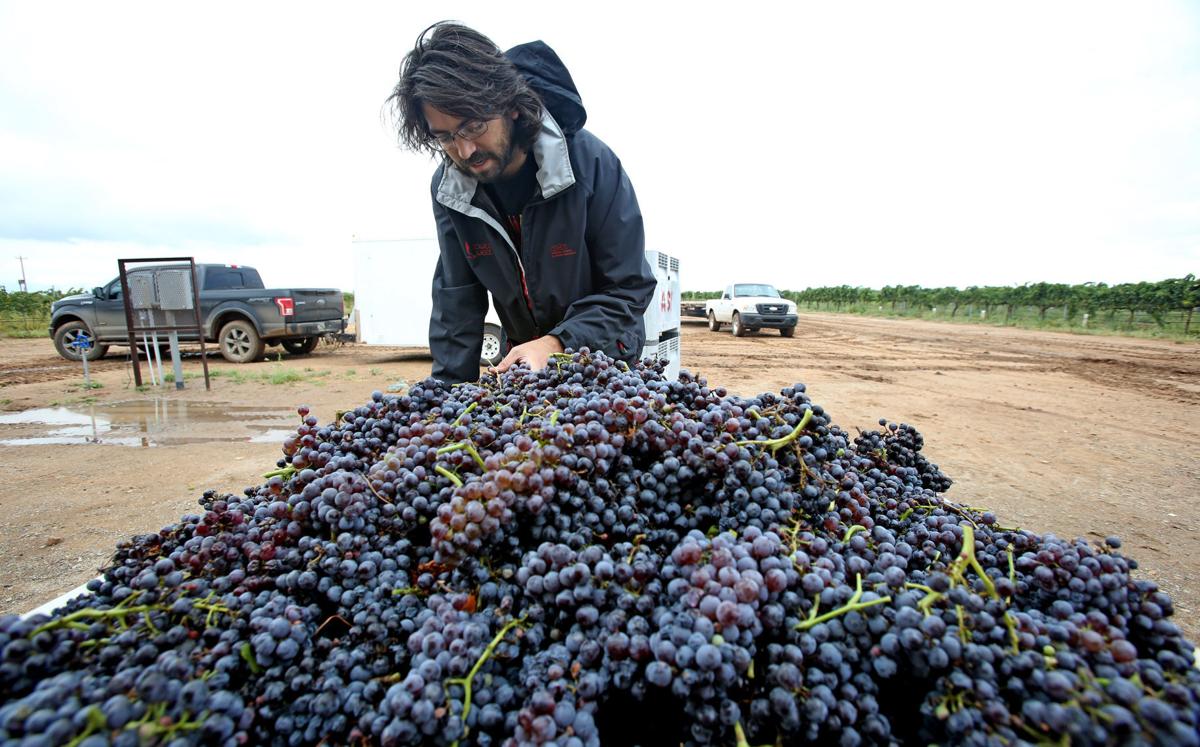 Robert Carlson looks over a bin of his Grenache grapes that were recently harvested at Carlson Creek Vineyards outside Willcox, Ariz., on September 8, 2016. The crew picked around 3.6 tons of grapes.

Arizona now has two federally designated American Viticulture Areas, both of them in Southern Arizona.

Willcox’s new designation as an AVA signals to the wine world that its wine industry is legitimate — as legitimate as any in Napa Valley, California, and other American wine-growing regions.

The AVA designation is a gesture of prestige that lends legitimacy to Willcox’s burgeoning wine industry, said Rod Keeling, president of the Arizona Wine Growers Association.

“It’s all about credibility,” said Keeling, who owns Keeling Schaefer Vineyards in Pearce, outside the Willcox AVA boundaries.

With the designation, “The federal government and wine officials say, ‘Hey, you guys in the sticks are doing something different, something unique,’” said Cellar 433 winemaker John McLoughlin, who spearheaded the Willcox AVA application process.

It signals to consumers that the wine comes from a region the federal government thinks is unique from any other wine-growing region in the nation, based on everything from topography and soil makeup to geography. Winegrowers within the AVA are allowed to advertise it on their bottles and in their marketing so long as the grapes are entirely sourced from within the region.

The move will not impact consumers — it shouldn’t lead to increased prices for wines, for example, McLoughlin said.

Arizona may soon get a third AVA, this one in the Verde Valley area of Central Arizona. Winegrowers there are in the early stages of applying for an AVA that would encompass 123 acres of vineyards in Page Springs, Cottonwood and Camp Verde, said Craig Boyd, vineyards manager and winemaker at Alcantara Vineyards in Cottonwood and one of the Verde Valley AVA’s chief architects.

They hope to submit a petition by early next year to the federal Alcohol and Tobacco Tax and Trade Bureau, which regulates the wine industry.

The process can take as long as three years.

Last week, the federal government designated the Willcox AVA for 526,000 acres in Cochise and Graham counties, federal documents show. The area is a shallow basin, separated from neighboring valleys by the Pinaleño, Dragoon, Chiricahua and Dos Cabezas mountain ranges.

Arizona’s only other AVA designated growing area is Sonoita, which got its AVA in 1984.

Once that happens, wineries within the boundaries will be able to label their wines “estate,” meaning the fruit and production is 100 percent locally sourced and unique to Willcox. Wineries outside the AVA have to label their wines as "Willcox," “Arizona” or “American,” but cannot call them estate wines.

“It puts us more on the map. I don’t want to say that it legitimizes us, because we are pretty legitimate as it is. But it does put wines that come from this area the special designation that in addition to being just Arizona wine, we’re Willcox wines,” said Robert Carlson of Carlson Creek Vineyard. “It feels like recognition for what we’ve already been doing.”

McLoughlin said the application process included studying the area’s unique soils, topography, concentration of wineries and geography. He said he invested $25,000 to $40,000 in the process, which included hiring someone to help draft the extensive application and represent the Willcox wineries in the process.

McLoughlin said the initial plan was to include wineries in the Chiricahua region, which includes Keeling Schaefer Vineyards in Pearce. But McLoughlin said those wineries didn’t want to be included in a Willcox AVA, so the group submitted two petitions — one for Willcox and the second for the Chiricahua Foothills AVA. The Chiricahua application was rejected because the trade bureau felt the two areas were too similar.

Keeling said that application is now in limbo.

Some 85 percent of the wine grapes grown in Arizona come from Willcox, Keeling said.

“The No. 1 reason to have an AVA is credibility,” he said. “This is a step towards improving the credibility and quality of Arizona as a wine-growing region.”

Marana couple has Willcox vineyards and expanding to Elgin.

Vodka, brandy and whiskey could be ready for sale by year's end.

Some worry that the Dollar General under construction at the intersection of Highways 82 and 83 will sap their hamlet's charm.

Wineries reported a drop in business after the blaze forced road closures.

Mourvedre grapes hang on a vine as harvest time nears at Carlson Creek Vineyards outside Willcox.

Odyssey Cellars owner John McLaughlin holds some Charbono grapes in his vineyard. Arizona’s other official viticulture area is around Sonoita.

Robert Carlson looks over a bin of his Grenache grapes that were recently harvested at Carlson Creek Vineyards outside Willcox, Ariz., on September 8, 2016. The crew picked around 3.6 tons of grapes.