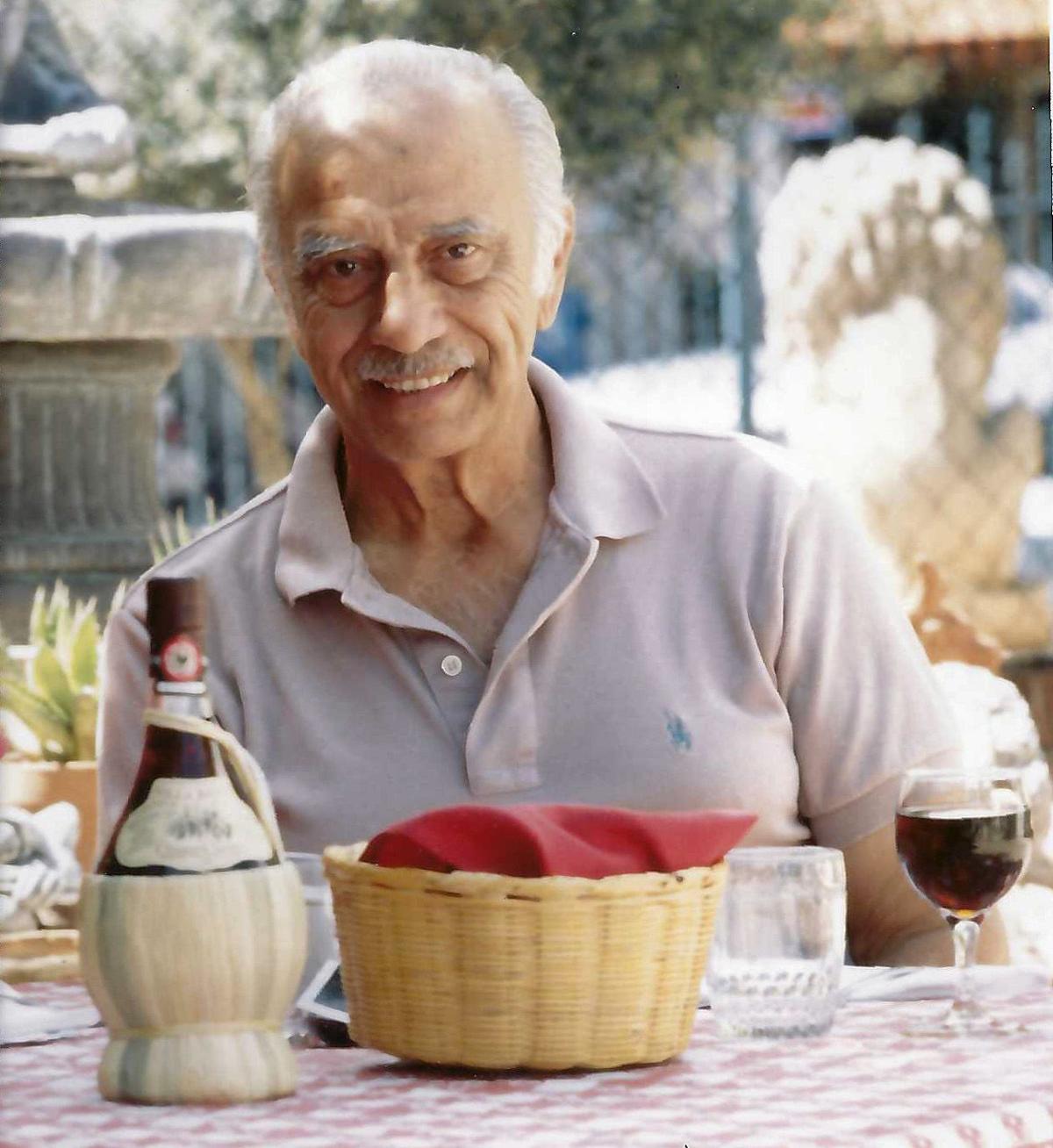 Salvatore Zagona Sr., patriarch of Caruso’s Italian Restaurant in Tucson, sits on the patio at the restaurant. 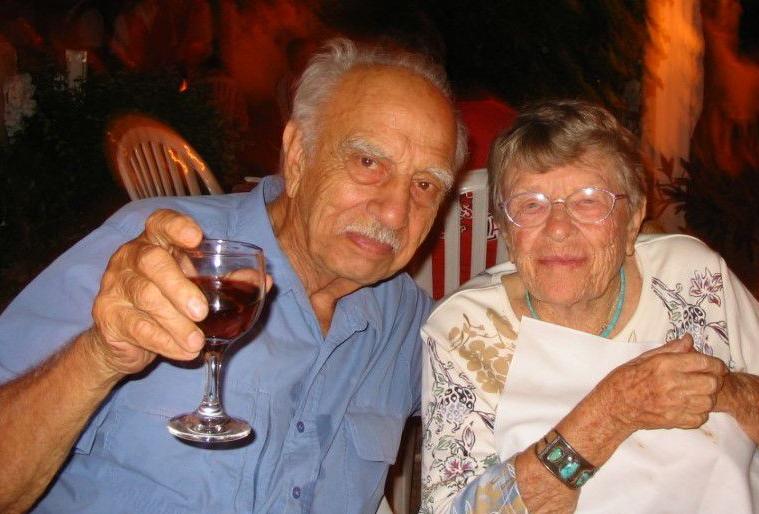 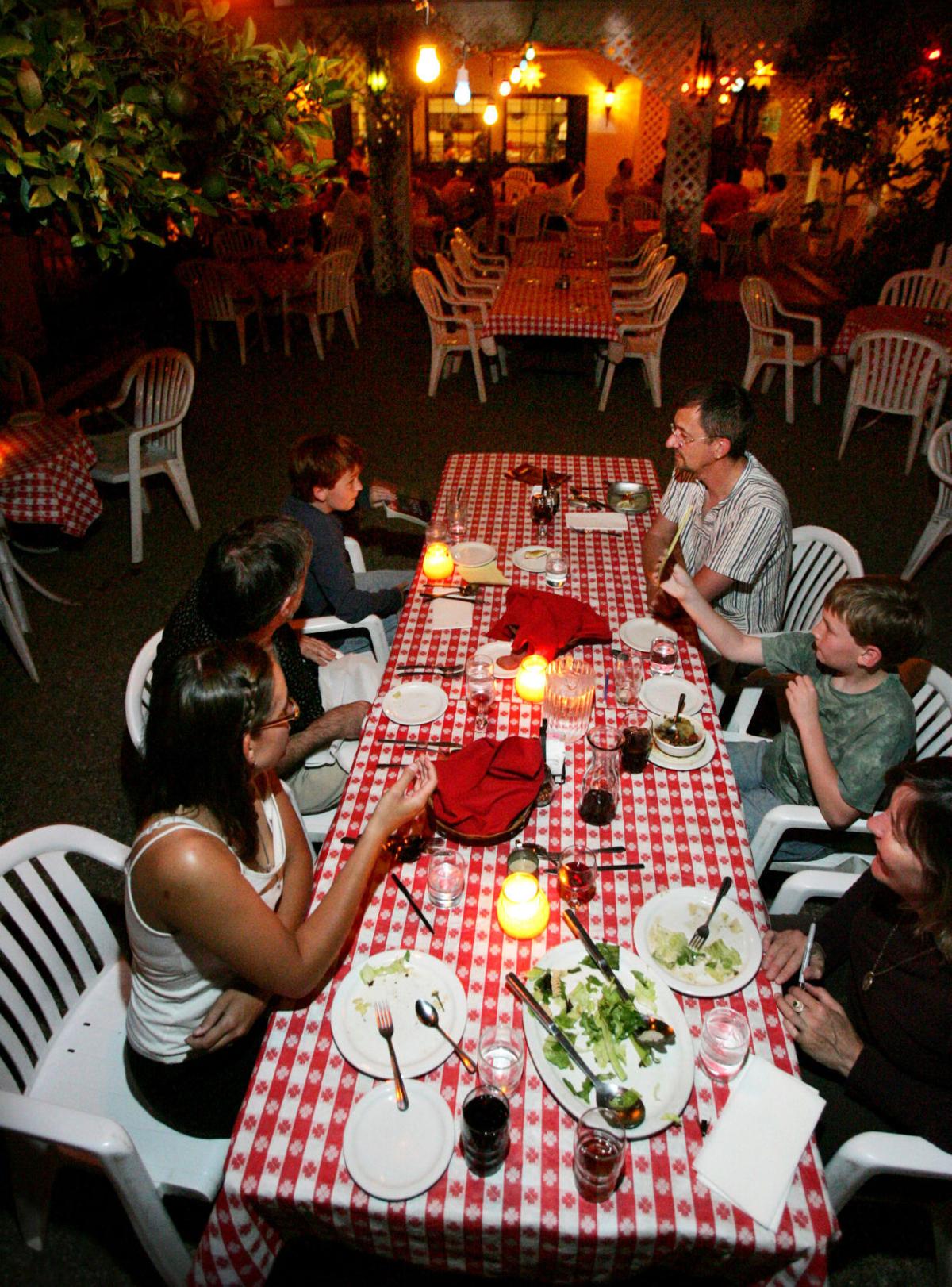 This 2007 file photo shows diners on the patio of Caruso’s Italian Restaurant in Tucson. 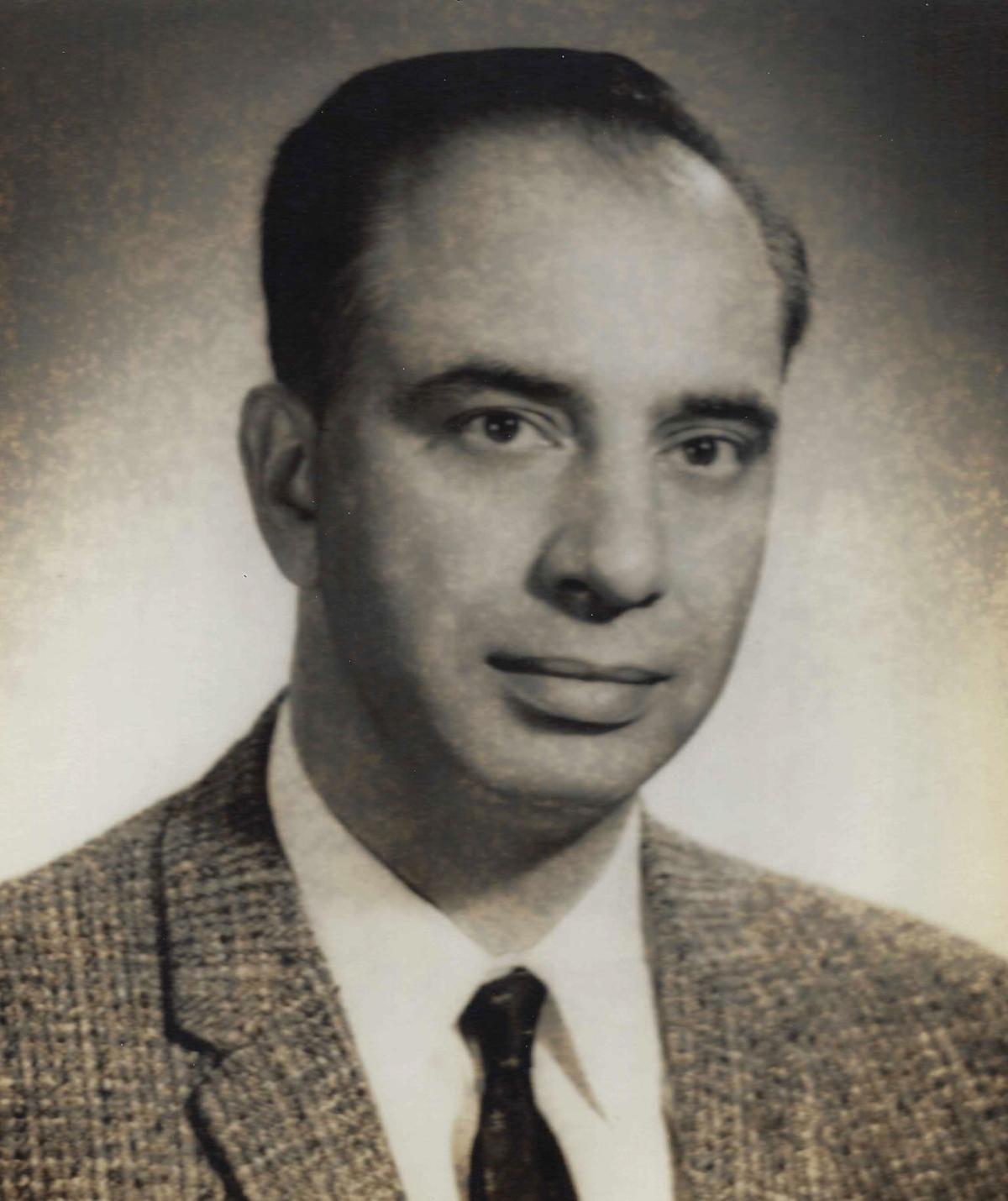 Salvatore Zagona Sr. took over Caruso’s in the early 1950s, leaving his job as a proofreader at the Star. 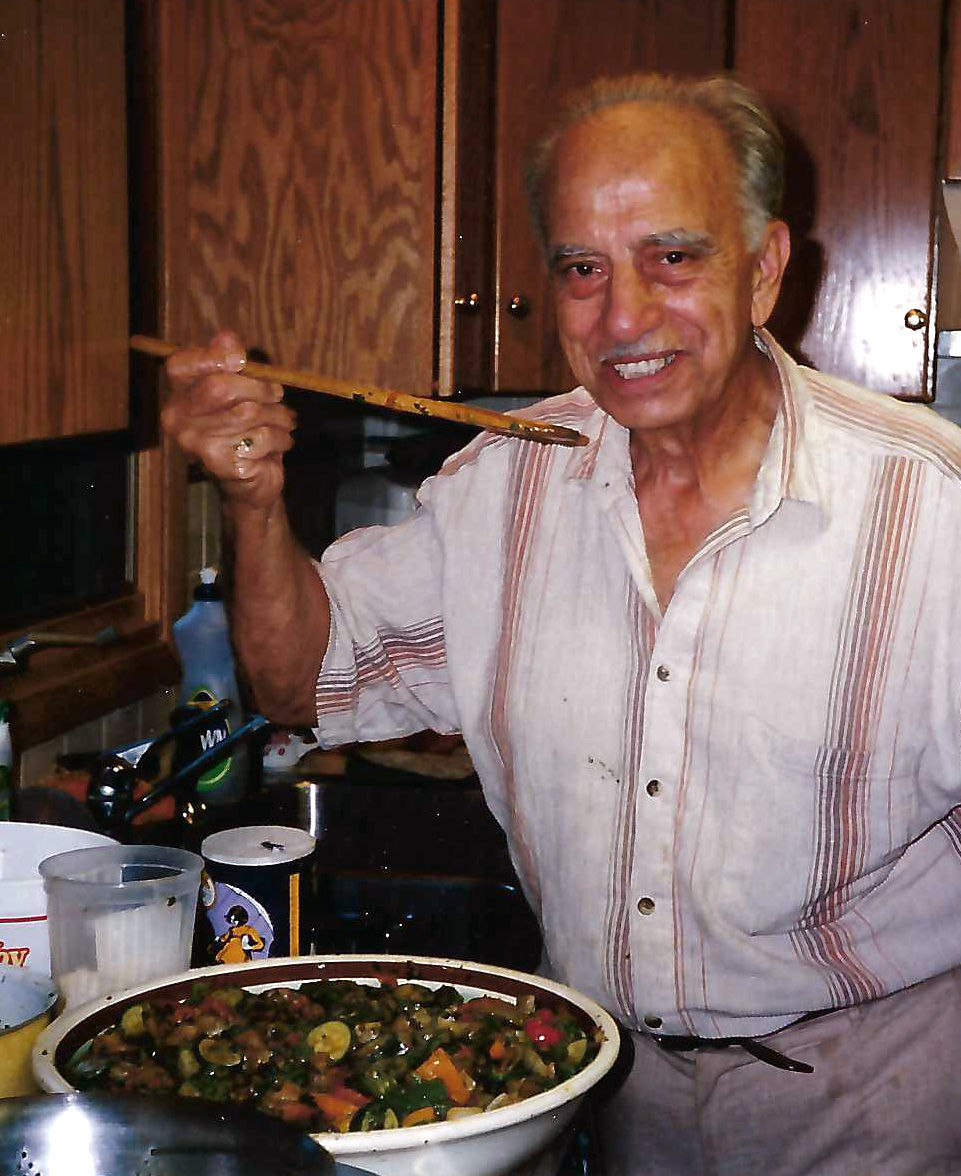 On a warm afternoon last summer, weeks shy of his 100th birthday, Salvatore Zagona Sr. took his usual route through Caruso’s backyard, sidestepping the need to walk through the dining room of his Italian restaurant on North Fourth Avenue.

He cut around to the spacious front porch facing the avenue and took his seat at his usual table — “L4,” tucked into the corner where he could see the entire expanse of the patio.

“He would come in and most people didn’t know who he was, but he had a presence,” said his great-niece Andrea “Ande” Motzkin, who has been co-general manager of her great-uncle’s restaurant since 2007. “Staff would get nervous, but he wasn’t that kind of personality. He was so warm and endearing. Everyone on the patio would kind of look because the staff would come out and greet him. ‘Who’s this guy?’ I loved watching it. I would come home and say, ‘Godfather was in today.’”

Because of the COVID-19 pandemic, that was the last time Motzkin saw Zagona in his restaurant. The last time they talked on the phone was a few days before he was admitted to the hospital on Feb. 1 after suffering a fall.

“He called me to remind me that he loved me very much and he was hoping that COVID would calm down and they would let me go see him,” Motzkin said last week, days after Zagona died on Sunday, Feb. 7. He was 100 years old.

Zagona had been a weekly regular at the restaurant for years after he left the operation to his son, Salvatore Zagona Jr.; Motzkin joined years later.

But the older Zagona’s presence was never far away. Diners tasted it in the menu that he created dish by dish going back to the 1950s when he took over the restaurant from his father, Caruso’s founder Nicasio “Caruso” Zagona. And they experienced it in his dining room and on that patio that he turned into a focal point of North Fourth Avenue years ago.

“Everything he did to develop Caruso’s, not just in terms of the menu but in terms of the place it has in Tucson, the patio, which he did a lot of development of from the smaller patio my grandfather had,” said Zagona Jr., the third oldest of six children. “The restaurant is his legacy. That’s the thing that meant the most to him, and raising a family of remarkable people.”

After the war, he followed his father to Tucson, where he attended the University of Arizona on the GI Bill and met his wife, Ingeborg Thordis, a UA graduate student at the time who also had served in the Navy during the war. The couple married in 1948.

Zagona Sr. took over Caruso’s in the early 1950s, leaving his job as a proofreader at the Arizona Daily Star to work full time at the restaurant while also finishing up his master’s and doctorate degrees at the UA. He continued running the restaurant after landing a professorship at the UA. He taught psychology for 30 years.

“When we were living at the restaurant I remember my father was at the restaurant in the evenings almost every night, but he juggled his time very, very successfully,” Zagona Jr. said, recalling how his father always made time for his family.

“He would take us up to Bear Canyon to make breakfast over an open fire,” his son recalled. “He used to make these omelettes with a lot of ingredients in them. He was a fantastic cook.”

Zagona Sr. created most of the recipes at Caruso’s and introduced pizza to the menu. He developed the house Lasagne al Forno and the Shrimp Mediterranean as well as the house-made sausage and meatballs, all of which are still on the menu.

“He encouraged us to keep creating new” dishes, Motzkin said. “He would lay in bed at night and at odd hours would call us up and say, ‘Hey, I was thinking: What if we did this and that?’ ” she recalled.

“This restaurant, the operation and the popularity of this restaurant, was his passion,” Motzkin added. “He loved teaching and being a professor, but this restaurant, this was it. This was where he loved to be. ... He was happiest here. (His) legacy will continue as long as someone from the family is here to run it.”

After spearheading the expansion of Caruso’s kitchen early in the 1990s, Zagona Sr. started scaling back his role in the restaurant. His son said his father spent his retirement learning new languages, including Greek, and traveling.

“Up until the middle of last year, he was fairly vital, fairly strong,” his son said.

In addition to his son, Zagona Sr. is survived by four daughters, Helen, Edith, Karen and Miriam; a son, Eric; and two grandchildren. Nicasio Zagona died in 1970 and Ingeborg Zagona died in 2016 when she was 99 years old.

Because of the COVID-19 pandemic, memorial services won’t be held until late spring, Zagona Jr. said.

In Rita Connelly’s latest book, “Historic Restaurants of Tucson,” readers are offered in-depth insight into some of the city’s most iconic and…

These Tucson restaurants and locally-owned independent food businesses are being honored for working to keep the city's food heritage alive.

In the Kitchen kicks off April 1 with Devon Sanner and dishes he and partner Matt Cable will soon serve at their new restaurant Zio Peppe.

Salvatore Zagona Sr., patriarch of Caruso’s Italian Restaurant in Tucson, sits on the patio at the restaurant.

This 2007 file photo shows diners on the patio of Caruso’s Italian Restaurant in Tucson.

Salvatore Zagona Sr. took over Caruso’s in the early 1950s, leaving his job as a proofreader at the Star.