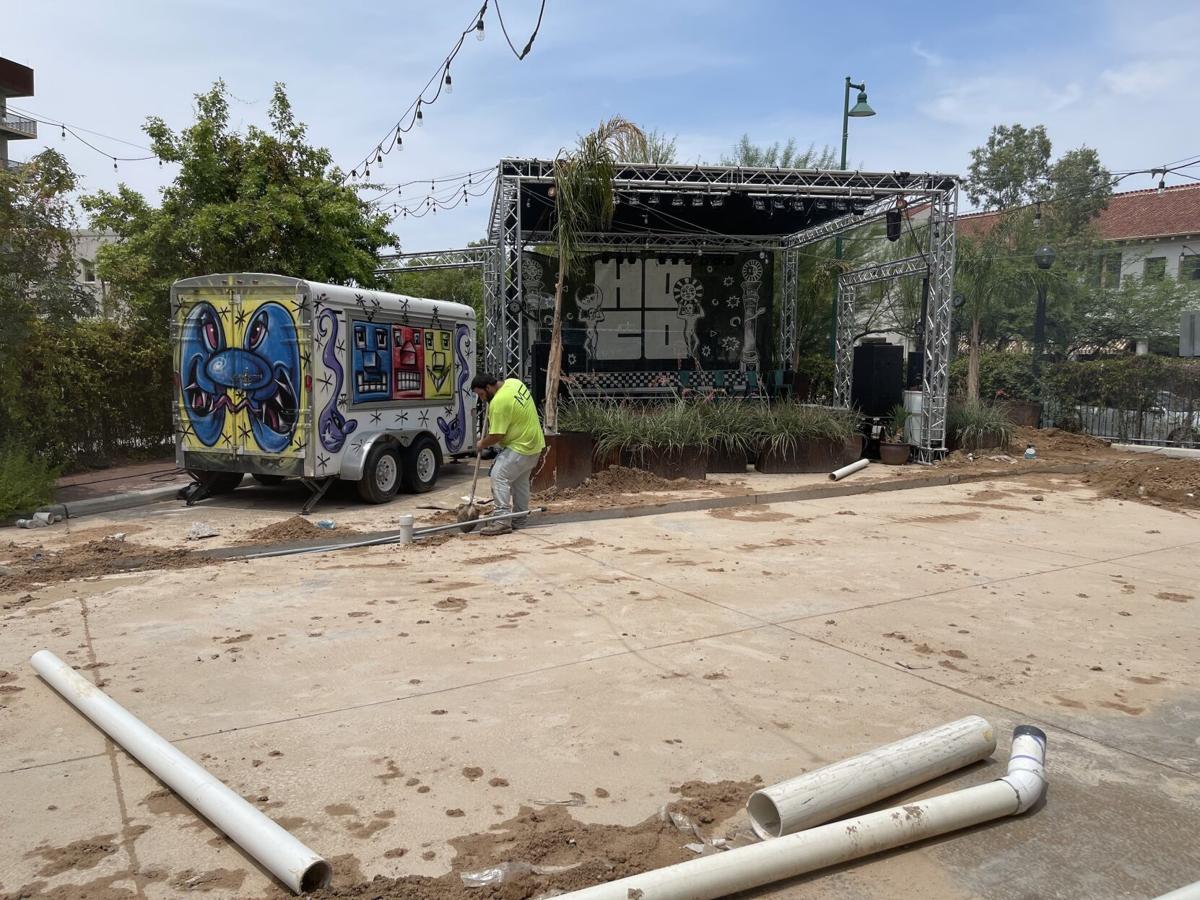 Electrician Clifton Zenizo of Maxim Electric digs the trench where the electric lines will run to power the misters in the Club Congress Plaza at Hotel Congress. 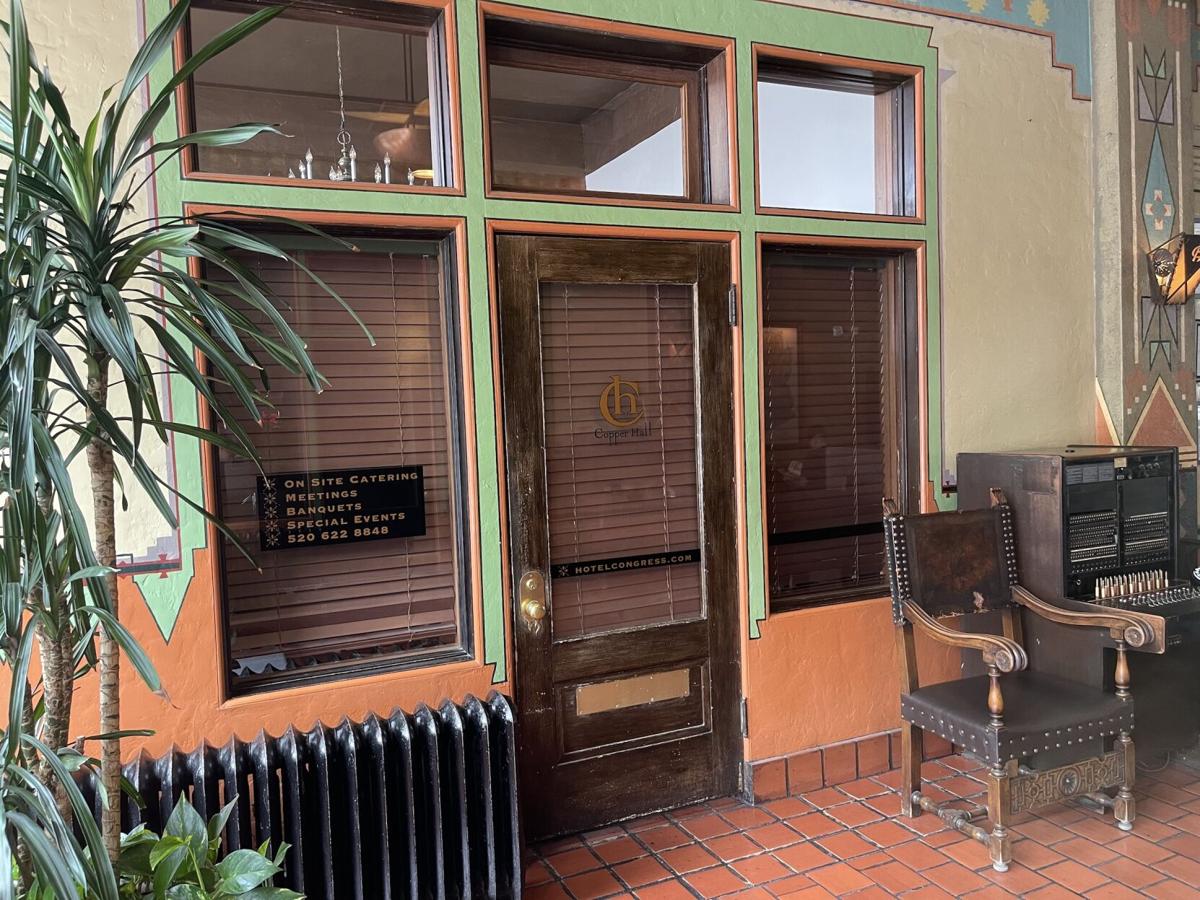 Hotel Congress is converting its Copper Hall into the Century Room — a tasting room and jazz hall.

Hotel Congress‘s Club Congress Plaza stage and Cup Cafe are closed throughout July and into early August while the historic downtown hotel undergoes phase one of a nearly $750,000 renovation project.

The first leg of the work will expand the usable space on the outdoor plaza, where Hotel Congress hosts concerts, and will include a retractable canopy with a commercial misting system.

The hotel, at 311 E. Congress St., also plans to convert the 2,200-square-foot Copper Hall near the lobby into the Century Room, a jazz music lounge and tasting room that will focus on regional wines, agave distilleries and live music.

“Coming out of a pandemic, we are phasing everything we

are doing on the availability of our resources,” said Haney, who said that the hotel is investing more than $100,000 of its money and Rio Nuevo has

The renovation work, largely centered on replacing the hotel’s 120-year-old plumbing, has been in the planning stages for three years, prompted by a series of patch-work repairs the hotel has done over the past decade, Haney said.

Last week, as the restaurant remained closed and two guests with their dog strolled the area, electrician Clifton Zenizo was digging the trench to run the electricity for the commercial-grade misting system. The misters will be part of a covered seating/audience area that will include a retractable canopy that can be removed for nighttime concerts.

Slutes said the covered seating and misters will allow Hotel Congress to use the plaza stage more, especially in the hot summer months.

“That’s really the goal, to expand the usage,” said Slutes, who said they will take the canopy down for most nighttime shows. “We still want to have concerts under the stars because that’s the best.”

Since the COVID-19 pandemic began in March 2020, Hotel Congress’s indoor Club Congress venue has been shuttered. Last October, after months of being idle, Congress started holding outdoor performances on the patio before limited socially distanced audiences.

Slutes has booked several shows for August on the Club Congress Plaza stage including National Park Radio on Aug. 10; Nocturnal Theory on Aug. 11; Mason with Tom Walbank Aug. 15; and Grams and Krieger Aug. 17.

For tickets and details, visit hotelcongress.com

Lucy Hale found cutting her long hair to be 'liberating'

Lucy Hale found cutting her long hair to be 'liberating'

This sake produced in Arizona will transport you to Japan

From his sake brewery in tiny Holbrook, Atsuo Sakurai and his Arizona Sake are making history well beyond Route 66. 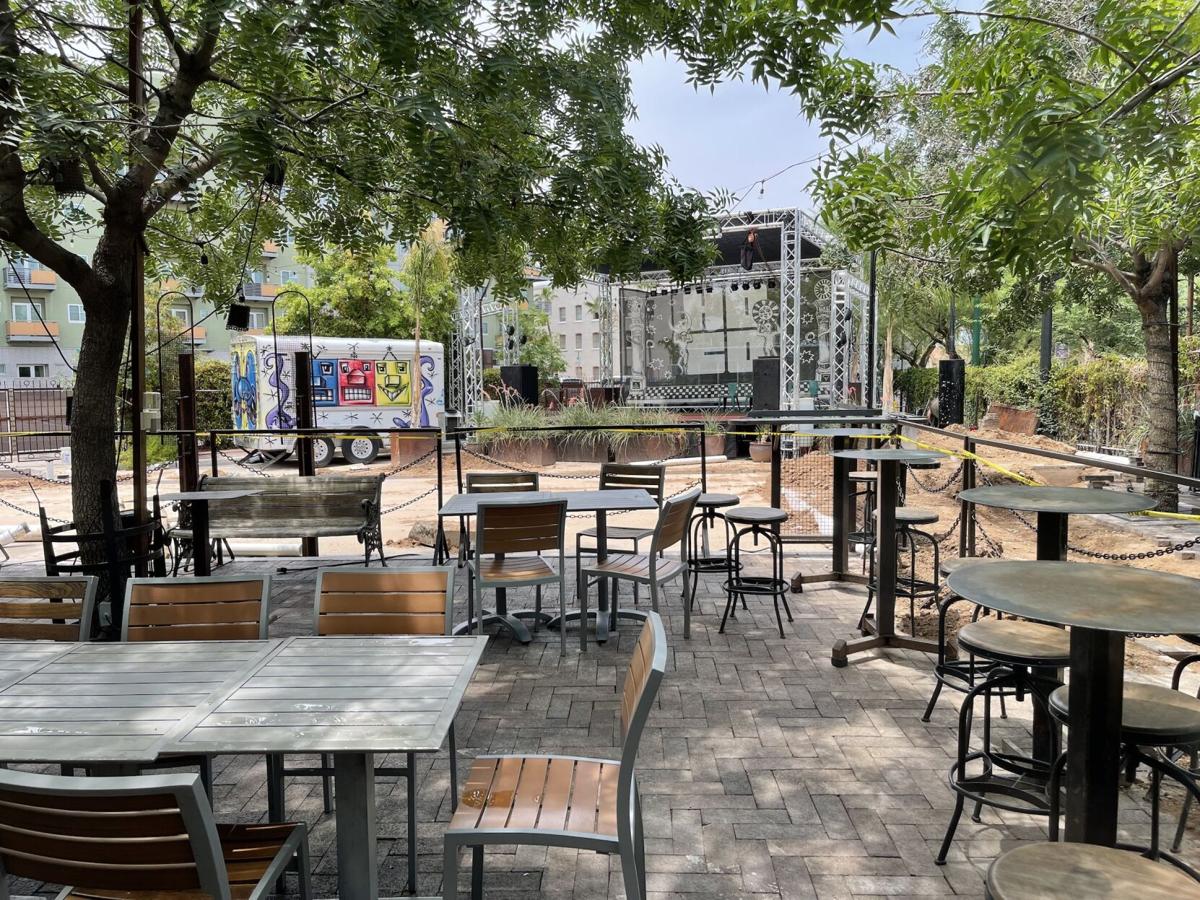 With the addition of a retractable canopy and commercial misting system, Hotel Congress is hoping to get more use of its Club Congress Plaza stage.

Electrician Clifton Zenizo of Maxim Electric digs the trench where the electric lines will run to power the misters in the Club Congress Plaza at Hotel Congress.

Hotel Congress is converting its Copper Hall into the Century Room — a tasting room and jazz hall.