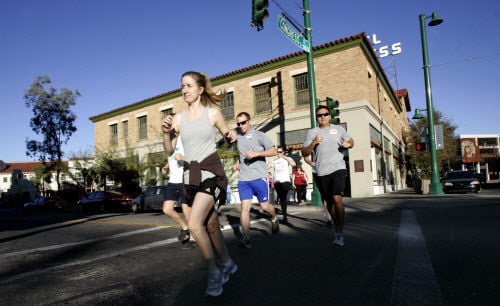 Runners participating in the Meet Me At Maynards walking and running event downtown run along East Congress Street in 2012. In nine years, it has become a Tucson tradition. 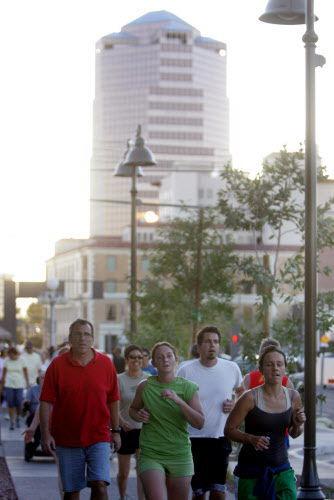 There have been 471 Meet Me at Maynards events since they started in 2009, when just under 200 people took part. More than 1,700, the most ever, were at the second birthday party.

By Randy Accetta Special to the Arizona Daily Star

April 9 is the ninth Anniversary of the first-ever Meet Me at Maynards — a free walk and run in downtown Tucson that has become a Tucson tradition.

What it is: The social walk and run is untimed and for all ages and abilities. The distances vary from 2 to 3 miles.

What do you get? After signing in, you get your hand stamped, which gives discounts to over 25 downtown area restaurants and bars. You also get a raffle ticket, giving you a chance to win one of the weekly tickets good for $25 to downtown restaurants or The Running Shop, a founding sponsor.

What is the route? The birthday route is 2 miles, beginning at Hotel Congress, 311 E. Congress St., heading west along Congress, then looping through Jacome Plaza, the old courthouse, along Scott Avenue, past Armory Park and back to the patio of Hotel Congress.

On other weeks, the main 3-mile route also includes the iconic rattlesnake bridge and portions of Fourth Avenue, beginning and ending on the back patio of Maynards Kitchen in the historic Train Depot. Maps and directions are available at check-in.

Is there music? On Monday there will be 26 bands and musicians along the route, an eclectic mix of Tucson’s popular music scene. The house band most every Monday night is the Determined Luddites.

How much does it cost? It’s free. Thanks to sponsorships from Tucson Medical Center and others, the events and giveaways are always free.

How do I get there? The modern streetcar goes right by the start, but downtown street parking is free after 5 p.m. and there are plenty of nearby garages and parking lots.

Meet Me at Maynards depends on about 15 volunteers every week, helping with check-in, guiding walks and helping hand out the weekly awards. Roma Lamor has been volunteering since 2011, helping with registration and doing some of the announcing. Last week was her 412th time attending and she estimates that she has walked more than 1,300 miles during her time at Meet Me at Maynards.

“My life has been forever changed by this event. I’ve made so many friends by meeting other volunteers and other MMM athletes,” she says. “My Mondays will always include this event.”

6: Number of people who have been to Meet Me at Maynards at least 400 times: Doug Kluge, Julie Kluge, Denise Leahy, Gary Carstenson, Marjorie Beklund, Roma Lamor.

26: Total number of bands on tap for the Ninth Birthday Party.

32: Number of people who have been to Maynards at least 300 times.

94: Total number of people who have been at least 200 times.

471: Total Meet Me at Maynards events.

Randy Accetta is a co-founder of Meet Me At Maynards, a former Southern Arizona Roadrunners president and a mentor in residence at the UA McGuire Center for Entrepreneurship.

Sculpture Festival Show and Sale: Shaping the exceptional into the everyday

“Oh, wow” is a frequent reaction when driving by the soaring “Sonoran Passage” sculpture over the Kino Parkway bridge, marveling at how it evo…

Bringing out simplicity of Beethoven's complexity in Ninth

Tucson Symphony Orchestra to perform its first Beethoven Symphony No. 9 in eight years.

UA Opera goes to hell in 'Orpheus in the Underworld'

Greek myth has it that Orpheus, a musician extraordinaire, is despondent when his much-loved wife, Euridice, is bitten by a snake and dies. He…

The ominous title belies the silly shenanigans of “Women in Jeopardy.”

Runners participating in the Meet Me At Maynards walking and running event downtown run along East Congress Street in 2012. In nine years, it has become a Tucson tradition.

There have been 471 Meet Me at Maynards events since they started in 2009, when just under 200 people took part. More than 1,700, the most ever, were at the second birthday party.