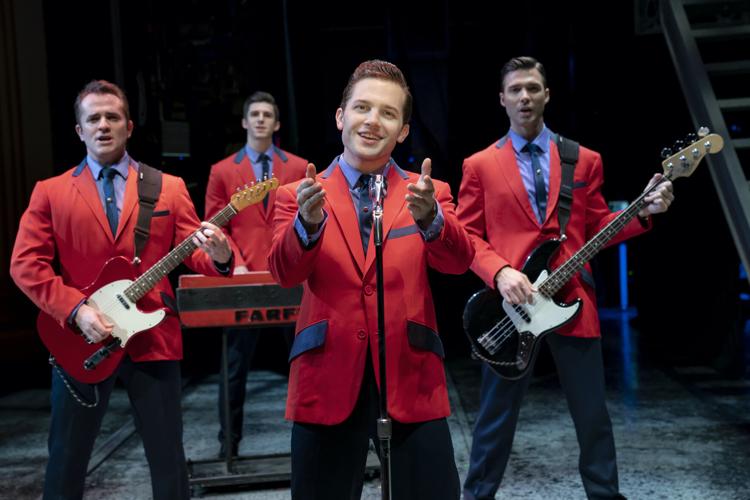 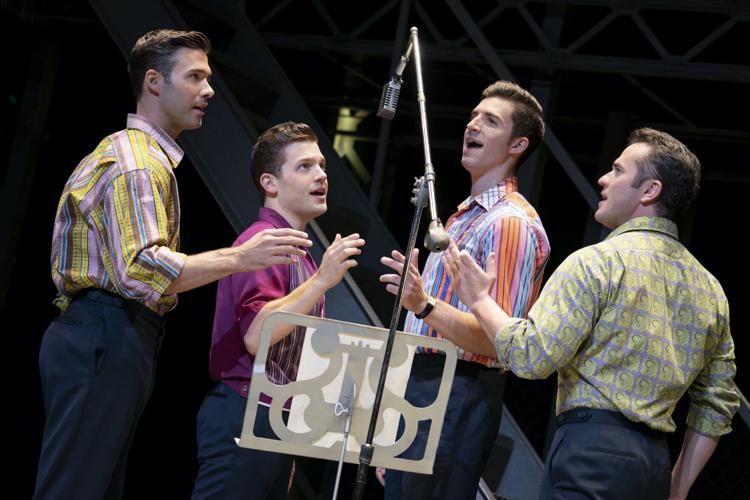 From left, Michael Milton, Jon Hacker, Eric Chambliss and Corey Greenan in a scene from “Jersey Boys,” the musical that is at Centennial Hall March 18-20.

On stage, Frankie Valli and the Four Seasons harmonized with perfection, from Valli’s stunning high-arching falsetto that stopped you in your tracks to their catalogue of catchy tunes from “Big Girls Don’t Cry” to the swoonable “Can’t Take My Eyes Off of You.”

Off stage, however, life was anything but harmonious for Valli and the band — Bob Gaudio on keyboard and tenor vocals, Tommy DeVito on lead guitar and baritone and Nick Massi on electric bass and bass vocals.

That’s the story you see in “Jersey Boys,” which Broadway in Tucson is bringing to the Centennial Hall stage this weekend for five performances. The show runs Friday, March 18, through Sunday, March 20.

“Jersey Boys” is a rags-to-riches-back-to-rags tale of four Jersey guys, several with minor criminal records, who became rock stars with a sound like nothing anyone had heard coming from a 1960s radio.

Valli’s arching falsetto separated the band from other 1960s superstars including the Beach Boys and the Beatles. When they took the stage, the girls swooned and screamed, but once they left the glare of the spotlight, all was not good with the band.

Legendary fights, egos clashing and a spectacular breakup all documented in the 2004 Tony-winning musical “Jersey Boys,” which traces the band’s rise and fall through the eyes of each member.

“Jersey Boys” is structured as a musical docu-drama, where each member gets to have their say on what worked and what didn’t, leading up to their international success and failure. It’s sectioned off in seasons — get it, Frankie Valli & the Four Seasons — with each of the original members telling the story according to the time of year.

Those attending must provide proof of COVID-19 vaccination or negative PCR test and masks will be required.

Coming up from Broadway in Tucson: “Tootsie” the musical, March 22-27.

Review: Broadway in Tucson's 'Wicked' is the perfect escape

The Tony-winning musical that takes you to Oz before Dorothy and Toto, when the Wicked Witch of the West was not so wicked, is here through Feb. 6.

Review: Renée Fleming shows off lighter side in Tucson concert

Arizona Onstage brings back 'Hedwig and the Angry Inch"

The production company had to close opening night 2020 with the arrival of COVID to Southern Arizona.

"The Lion King," Mozart's "Magic Flute" and a collab between Orkesta Mendoza and Tucson Symphony Orchestra are on the schedule for local arts organizations.

The tour version of the Broadway musical continues at Centennial Hall through Sunday, March 27.

Hell is a musical mecca in 'Hadestown'

Broadway In Tucson has brought the multiple Tony Award-winning musical to Centennial Hall through Sunday, April 17.

From left, Michael Milton, Jon Hacker, Eric Chambliss and Corey Greenan in a scene from “Jersey Boys,” the musical that is at Centennial Hall March 18-20.