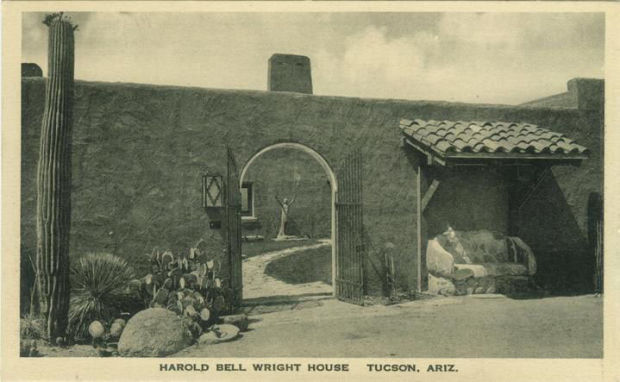 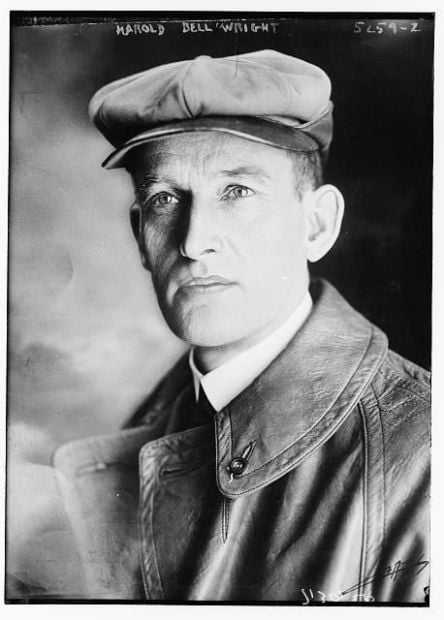 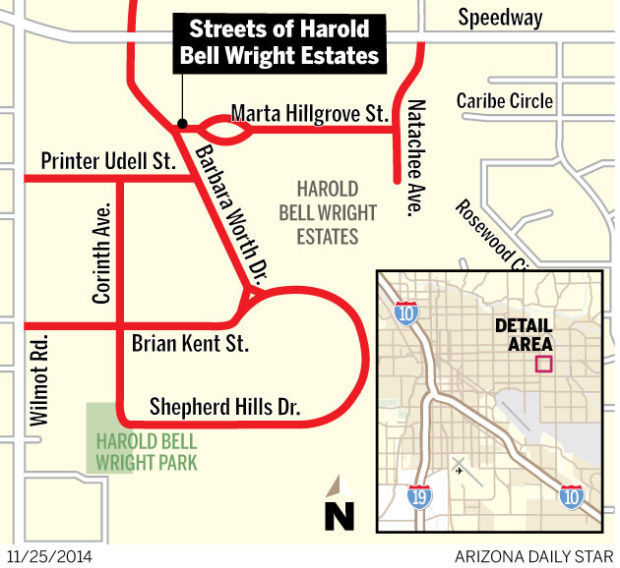 Harold Bell Wright was born in 1872 in Rome, New York. He grew up in poverty and was on his own by the time he was 12 years old.

He scraped out a living for many years in the Midwest. One evening, he attended the first of a series of talks given by an evangelist at a local church. These sermons inspired him to attend Hiram College to study to be a minister.

Bell was a pastor in Pierce City, Missouri, and then Pittsburg, Kansas. During his five years in Kansas, he married Frances E. Long in 1899 and they had three sons. He also wrote his first book, “That Printer of Udell’s,” (the namesake for Printer Udell Street in Harold Bell Wright Estates) a partly autobiographical Christian-themed novel, which was published in 1903. That book later inspired a young Ronald Reagan to become a Christian.

Wright first arrived in Tucson in 1912, but stayed temporarily and was gone by 1914.

In 1915, he was diagnosed with tuberculosis. He moved back to Tucson and set up camp on the Flying V Ranch at the foot of the Santa Catalina Mountains. His health improved with the help of nature and the staff of St. Mary’s Hospital.

He completed the manuscript of “When a Man’s a Man” in 1916. The story of ranch life, romance and drama centers around the Cross-Triangle Ranch in Prescott.

In much better health, Bell went to California and wrote his ninth book, again set in the Ozarks. “The Re-Creation of Brian Kent” (Brian Kent Street) was published in 1919.

The next year, Wright divorced his wife and married Winifred P. Duncan in San Diego.

In 1921, he bought 160 acres of land on the southeast corner of Speedway and Wilmot Road and built a large pueblo-style home, completed in 1922. He was fascinated by cacti and collected 300 varieties.

His next book, “The Mine With the Iron Door” (1923), was based in what is now the Oro Valley area. It was about an orphan girl named Marta Hillgrove, (Marta Hillgrove Street) raised by two bachelor prospectors. She is kidnapped and held for information about the location of the mine that only Natachee, a Native American, has. Like most of Wright’s books, good prevails over evil, and she is rescued. His next literary work, “A Son of His Father”(1925), was set in Tucson and Southern Arizona.

A movie version of “The Mine With the Iron Door” was filmed in and around Tucson and premiered at Tucson’s Rialto Theater in 1924. “A Son of His Father” was made near Oracle, and its first showing was in Tucson.

In 1926, Wright became co-owner of the large Cross Anchor Ranch, about 75 miles southwest of Tucson. The ranch bordered the Papago (now called Tohono O’odham) Indian Reservation, and in time he began to meet his neighbors, who sometimes shared oral traditions passed down from their ancestors. When Wright learned the tribe had no written language, he became concerned that as the elders died off, the oral traditions would be lost.

He worked with the elders to gather and edit their stories and had members of the tribe check them for accuracy. That became his 14th book, “Long Ago Told: Legends of the Papago Indians,” released in 1929.

By 1934, Tucson had grown considerably in the direction of Wright’s house. Pollution had increased significantly, and his cherished views of the Santa Catalina Mountains were partially blocked by the large cypress trees planted north of his home by New York heiress Florence Pond when she built her mansion, Stone Ashley (now the Mountain Oyster Club).

He moved to Escondido, California, and died in 1944 in La Jolla.

In 1950, Mary Gardner owned the house and surrounding property and had it developed into the Harold Bell Wright Estates subdivision, with the streets named after the characters and places in Wright’s book. The home itself still stands and is privately owned.

Special thanks to Dani Byers of Bookmans Entertainment Exchange on Speedway.