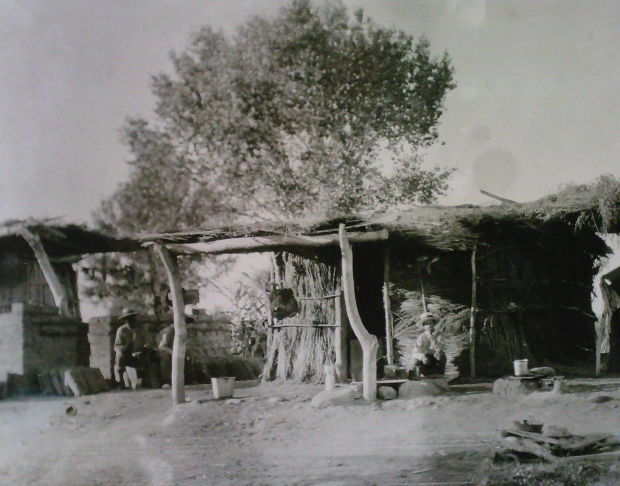 This 1894 photo is believed to have been taken at Los Reales, near the Santa Cruz River. Los Reales was not incorporated and its exact boundaries are unknown. 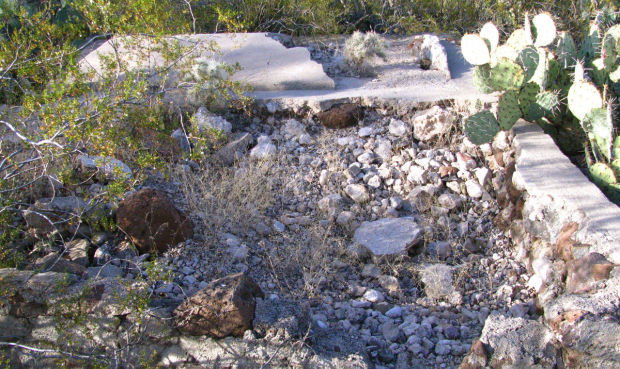 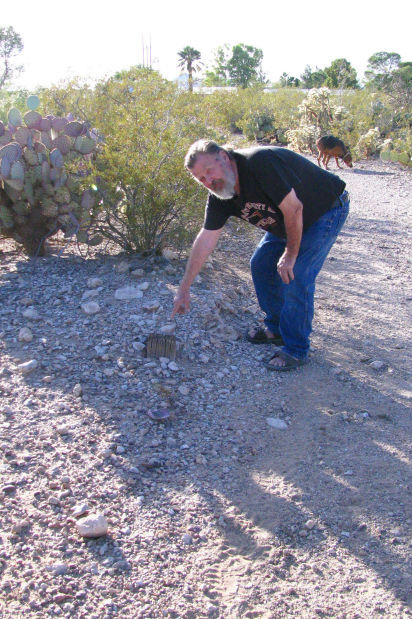 Mikki Niemi, owner of some of the old Los Reales Cemetery, points to part of an old cross in front of a grave.

A miner named Domingo or S.R. Domingo, built his home and a small foundry on the west bank of the Santa Cruz River and would bring his ores down from his mine in the hills for processing.

His home was old and weathered by the time more settlers moved to the rich valley land, then supported by an ever-flowing Santa Cruz River. The first known settlers were Rafael Herreras, Mercedes Frederico, Joaquin Burruel and Gabino Altamirano, as well as Tomas, Francisco, Ysmael, Juan and Jesus M. Elias. They built adobe homes, planted crops and established the first Los Reales community.

A couple of oral histories cite the genesis of the community as during the Mexican Period of 1821-1854, as Mexico’s government established itself free from Spanish rule. But it likely got its start around the time of the U.S. Civil War, between 1861 and 1865.

Domingo’s mine flourished and he employed many miners. When laborers came to his house or foundry to be paid, he would say, “Wait here for me, I shall be back soon” and then disappear into the tall, thick grass and trees along the river. He would return with money in hand to pay them. Neighbors and laborers believed he kept his wealth buried, since no banks existed there at the time.

One day, residents of the village were shocked to see Domingo’s workers carrying a box that was nailed shut, with blood dripping out, to the graveyard. It was rumored that workers had murdered Domingo for his money, but the workers said nothing about how Domingo died. With no law in Los Reales, nobody was ever brought to justice and it remains unknown what happened to Domingo’s money. This is believed to have occurred in the late 1860s.

In 1937, Rosenda Elias Contreras, who was born in 1865, was interviewed about early life in Los Reales and had this to say: “We didn’t have sense enough to dig wells, but used to build charcos (watering holes or pools) from which we took our drinking water.” The farmers used wooden plows with steel points, pulled by oxen, and “grew only grain, but the farmers used to burn the straw instead of feeding it to the oxen because they didn’t realize it had food values. The oxen fed off the pasture.”

Even after the Gadsden Purchase was finalized in 1854, Mexican money was honored in Los Reales. A peso was worth a dollar, quatro reales were 50 cents, dos reales were 25 cents, a real was 12ƒ cents, medios were six cents and cacharpas were large, copper one-cent pieces.

In 1874, President Ulysses S. Grant established the San Xavier Indian Reservation. Non-American Indians were ordered to leave, but a few families, such as those of Viviano Moraga and Jose Maria Martinez (namesake of Martinez Hill near the Interstate 19), managed to retain land on the reservation.

The creation of the reservation started a second Los Reales on the east bank of the Santa Cruz River, as many Mexican-American families left their former homes.

According to Contreras, the new town had two stores, one of which was run by Antonio Bustamante, and a blacksmith shop close to town, run by Samuel Shortridge.

Residents expanded their crops to include wheat, watermelon, corn, barley, hay and garden vegetables. All of the grain was sold to the government for the cavalry horses and the soldiers. They also sold mesquite wood to supplement their incomes.

Throughout its existence, Los Reales, like many communities in southern Arizona, faced Apache attacks, with the theft of horses and livestock a common occurrence. The Indians commonly kidnapped boys and would name them “cautivo” or “one who has been captured”. As a result of years of raids, many Los Reales residents attended the 1887 ceremony in Tucson for Gen. Nelson A. Miles,, honoring the man who was credited with putting an end to the Apache attacks and kidnappings.

On May 20, 1890, the Arizona Weekly Citizen reported on the celebration of San Isidrio, patron saint of the harvest, “at the Realles (sic), between Tucson and San Xavier.” A procession began at the north end of the settlement and traveled from farm to farm, with participants praying for a bountiful crop.

Contreras believed the town was abandoned in 1912 as a result of Midvale Farms taking most of the water from the Santa Cruz River. Midvale Farms is said to have been owned by the descendants of John Deere through his well-known company. The land is now the Midvale Park subdivsion.

Little remains today of the old Los Reales community except for remnants of the Los Reales Cemetery, located just northeast of Los Reales Road and I-19.

The Pima County Board of Supervisors established Los Reales Road or Road No. 64, on Dec. 30, 1922. It is the main east-west street south of Valencia Road.

Note: Because Los Reales was never incorporated as a town, the exact boundaries of it are unknown. But it is known that, in 1874, much of what is now Midvale Park and directly south of it was part of the first Los Reales.

Special thanks to Bernard “Bunny” Fontana and Mikki Niemi for research assistance on this article. Additional sources listed in the online version of this article.

Street Smarts writer David Leighton is looking for information or photos related to the old Los Reales community. If you have something to share, please contact him at streetsmarts@tucson.com

This 1894 photo is believed to have been taken at Los Reales, near the Santa Cruz River. Los Reales was not incorporated and its exact boundaries are unknown.

Mikki Niemi, owner of some of the old Los Reales Cemetery, points to part of an old cross in front of a grave.