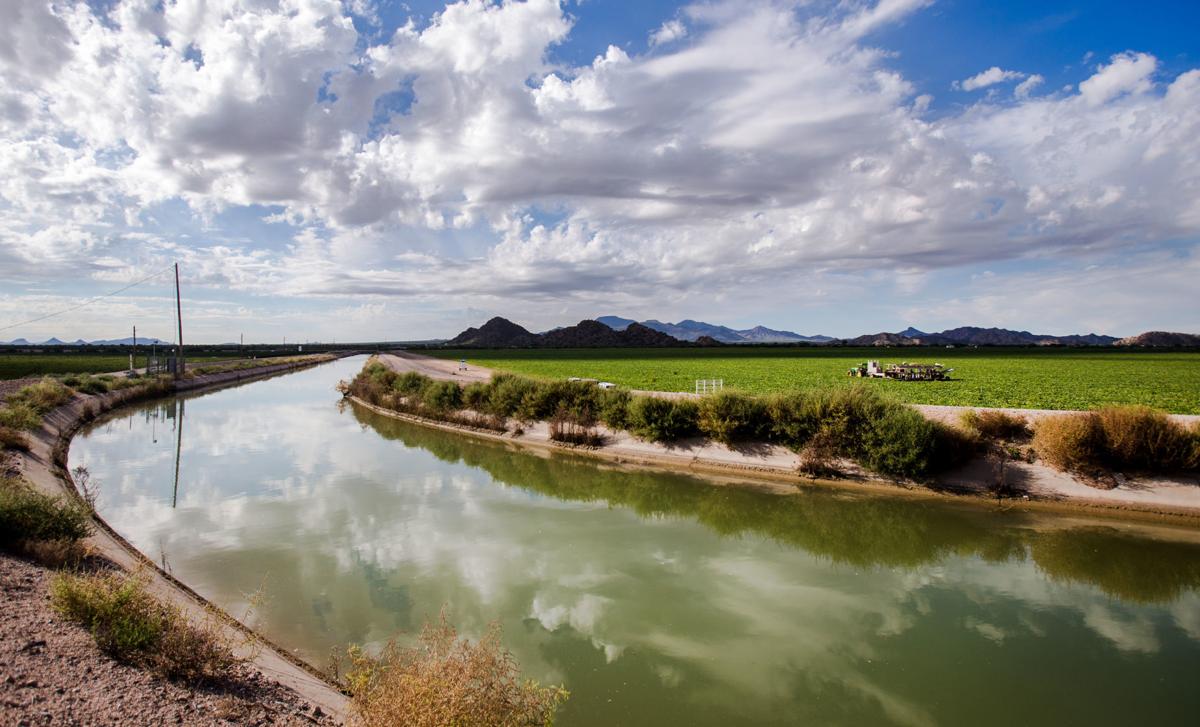 The Santa Rosa Canal, ferrying Central Arizona Project water, makes a bend around workers harvesting the yield from a cantaloupe field on Oct. 23, 2018, in Maricopa, Ariz. 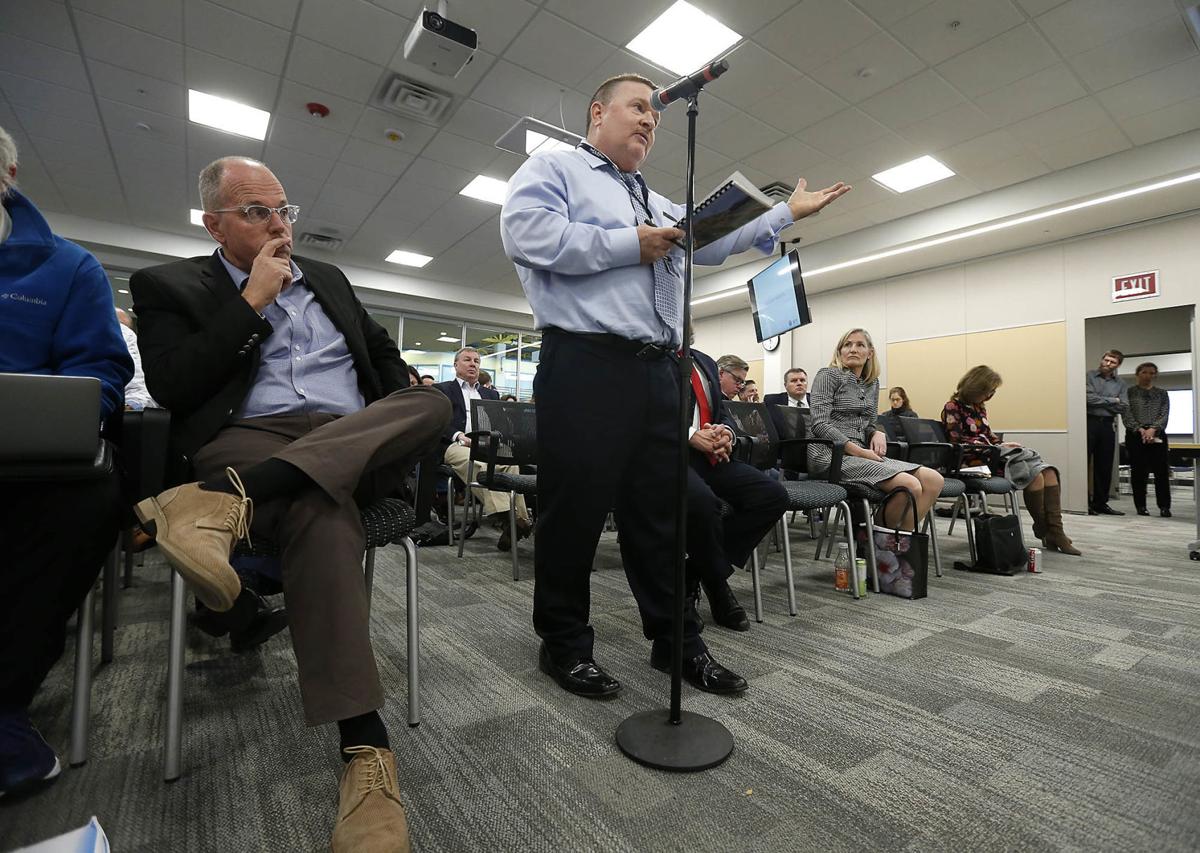 Central Arizona Project board member Mark Lewis speaks during Tuesday’s discussions among interest groups trying to hammer out a drought contingency plan for Arizona in Phoenix. 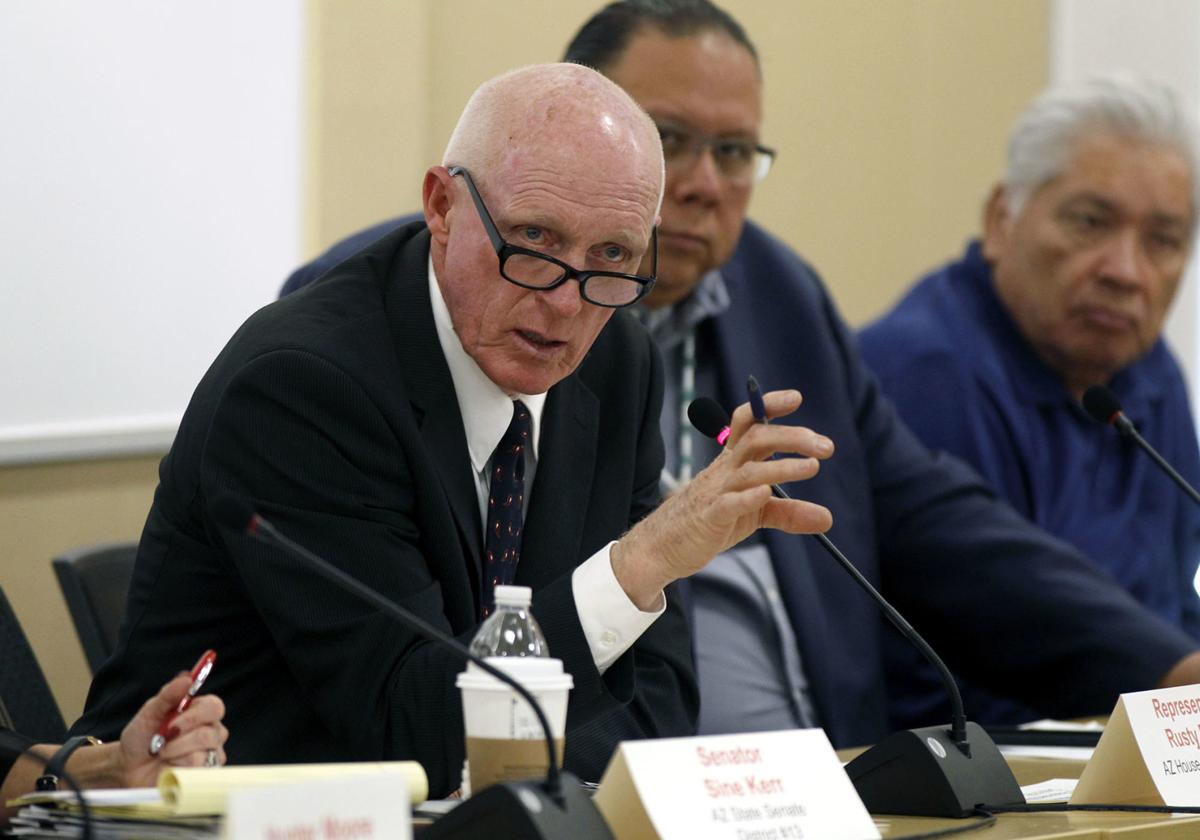 District 25 House Representative Rusty Bowers speaks during a Central Arizona Project (CAP) meeting regarding drought contingency plans on Tuesday, Jan. 8, 2019. The focus of the meeting was to address contingency plans for water allotments that will be triggered when Lake Mead falls below already dangerous levels. 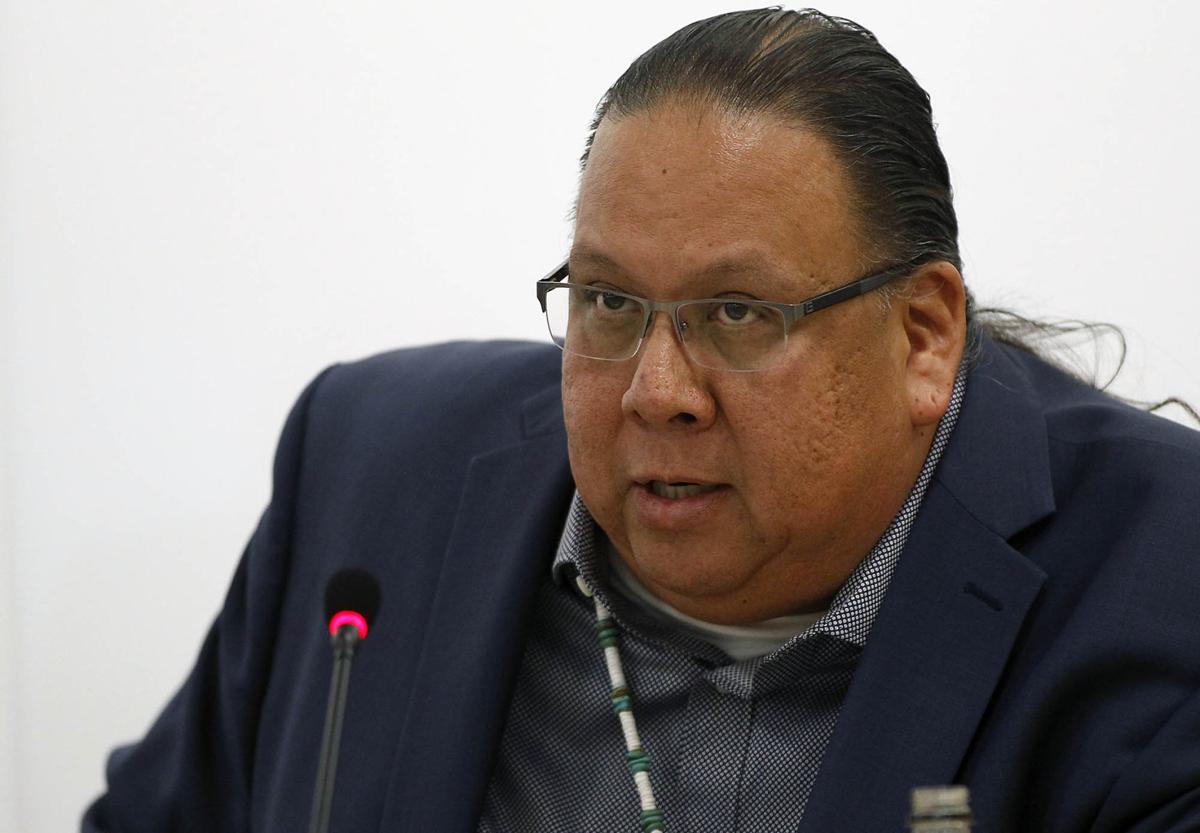 Gov. Stephen Roe Lewis, of the Gila River Indian Community, speaks during a Central Arizona Project (CAP) meeting regarding drought contingency plans on Tuesday, Jan. 8, 2019. The focus of the meeting was to address contingency plans for water allotments that will be triggered when Lake Mead falls below already dangerous levels.

PHOENIX — Four key issues remain unsettled as negotiators for a Colorado River drought-adaptation plan wrap up discussions and prepare to send a complex package of water-saving proposals to the Arizona Legislature.

Farmers, developers and officials of the $4 billion Central Arizona Project said Tuesday they still aren’t satisfied with various provisions in a proposed drought contingency plan aimed at propping up imperiled Lake Mead. Because of that, negotiations over details will probably have to continue even when the Legislature starts debating the plan next week.

But leaders of the prolonged effort to produce a drought contingency plan for Arizona say they’re optimistic of getting the issues resolved and a legislative sign-off in time to meet a federally imposed Jan. 31 deadline to adopt the plan.

Tuesday, during the eighth meeting of an advisory committee working on the plan, members groped for solutions and compromises but those remained elusive, although progress was made.

“There are only four issues left. We have 82 things that we’ve solved,” CAP general manager Ted Cooke said at a news briefing after the meeting of the 40-member advisory committee that’s worked since July on the drought plan.

“It’s clear there’s some disagreements. If we demonstrated anything today, it’s that we have found a lot of compromise on a lot of issues,” said Hunter Moore, natural resources adviser to Gov. Doug Ducey. “If we continue to follow that pattern, I do” think the plan can be resolved, Moore said.

The committee, representing numerous big water interest groups, including farmers, developers, cities, tribes and home builders, is discussing a plan to save up to 700,000 acre-feet of river water over a seven-year period.

The hope is that the savings will prop up Lake Mead before it quickly falls to levels requiring catastrophic cuts in water deliveries to Arizona, California and Nevada in the Lower Colorado River Basin.

Federal Reclamation Commissioner Brenda Burman has warned she’ll impose her own drought-saving plan on Arizona and the other six Colorado River Basin states if the states don’t approve plans by Jan 31. Arizona and California are the only states without approved plans.

The Arizona Department of Water Resources and the governing board for the CAP — the state’s two biggest water agencies — have endorsed the plan’s current version, as has Ducey.

As the plan stands, Pinal County farmers would lose a big chunk of their CAP water once the first Colorado River shortage is declared, which could come as soon as next year. By 2023, the farmers must replace CAP supplies with groundwater — their only water source until CAP went online there in 1986.

The Tohono O’Odham Nation and the Gila River Indian Community and numerous Phoenix-area cities will have their supplies whittled down over time starting the same year. All these users would get their cuts “mitigated” by the use of outside supplies for a few years.

But at Tuesday’s advisory committee meeting, these unsettled issues emerged:

Farmers, however, want 105,000 acre-feet of CAP water for 2022 as well, and it’s uncertain where that extra water would come from.

Tim Thomure, a committee member and Tucson Water’s director, said he would be prepared to offer 35,000 acre-feet annually for two years, water that would be placed on Pinal County farm fields.

But making that offer will require four changes in state law to make it easier for the city of Tucson to use or sell “credits” it would gain from storing the water on those fields to allow it to pump additional groundwater elsewhere, he said. State Water Resources Director Tom Buschatzke praised Thomure’s proposals as “creative,” but said some other interests whom he didn’t name might not support more water for farmers out of concern that it wouldn’t be fair to other water users.

The homebuilders groups say they want the extra 7,000 acre-feet included in the plan as a matter of “certainty,” and that pool of water could be removed once it’s clear the Gila Indian deal will go through. A Phoenix-based developer group, the Valley Partnership, disagrees, with its director Cheryl Lombard saying its members see no need for the extra 7,000 acre-feet.

He acknowledged that, currently, that issue is “the only one I don’t know how to (solve). But we’ll figure out a way to solve that.”

SCOTTSDALE — An Arizona police officer is dead after being struck by a vehicle while conducting a traffic stop on a Phoenix-area freeway.

DPS says it's still investigating what led to the collision.

GLENDALE — A man has been arrested for allegedly vandalizing a floor of the Glendale airport, causing thousands of dollars in damage, authorit…

Jerry Sanstead was jailed on suspicion of manslaughter, aggravated assault with a deadly weapon and endangerment.

A man who was seriously injured after being hit by a truck in midtown Tucson last week has died, police say.

Tucson police to use $20,000 grant to target bad drivers, jaywalkers

Officers will look out for: speeding motorists, red-light runners, vehicles failing to stop at crosswalks, school zone violations, jaywalking and bicyclists riding the wrong direction and on sidewalks, a police news release said.

The Santa Rosa Canal, ferrying Central Arizona Project water, makes a bend around workers harvesting the yield from a cantaloupe field on Oct. 23, 2018, in Maricopa, Ariz.

Central Arizona Project board member Mark Lewis speaks during Tuesday’s discussions among interest groups trying to hammer out a drought contingency plan for Arizona in Phoenix.

District 25 House Representative Rusty Bowers speaks during a Central Arizona Project (CAP) meeting regarding drought contingency plans on Tuesday, Jan. 8, 2019. The focus of the meeting was to address contingency plans for water allotments that will be triggered when Lake Mead falls below already dangerous levels.

Gov. Stephen Roe Lewis, of the Gila River Indian Community, speaks during a Central Arizona Project (CAP) meeting regarding drought contingency plans on Tuesday, Jan. 8, 2019. The focus of the meeting was to address contingency plans for water allotments that will be triggered when Lake Mead falls below already dangerous levels.