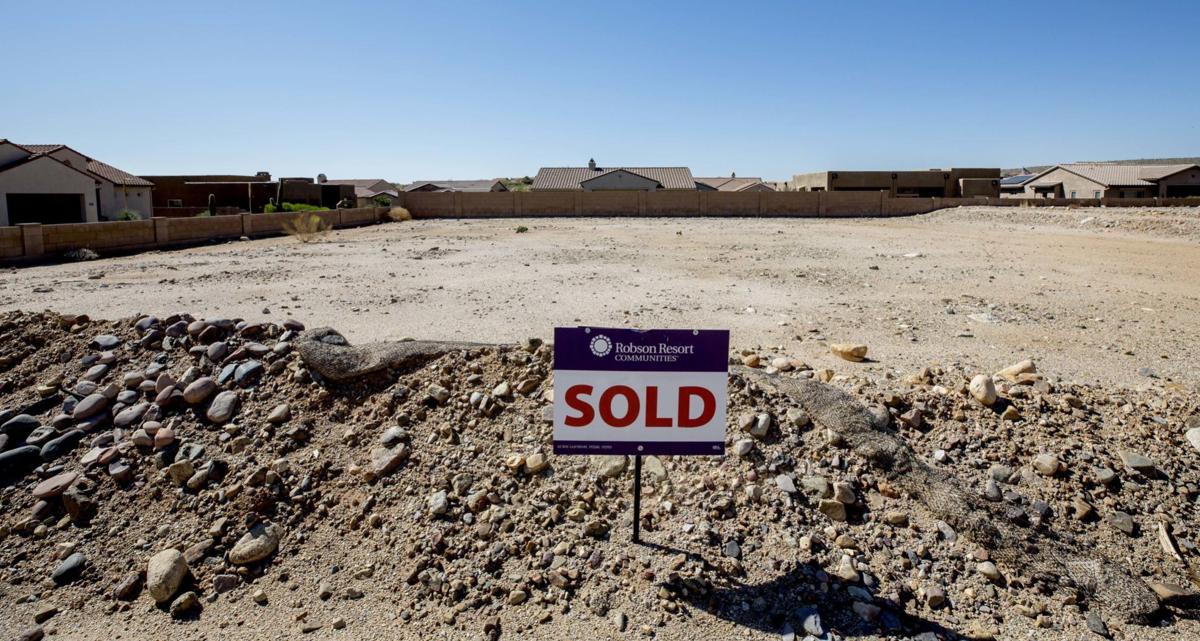 A “sold” sign marks the spot of a future home at The Preserve at SaddleBrooke. Residents in SaddleBrooke rely solely on groundwater for their water needs. 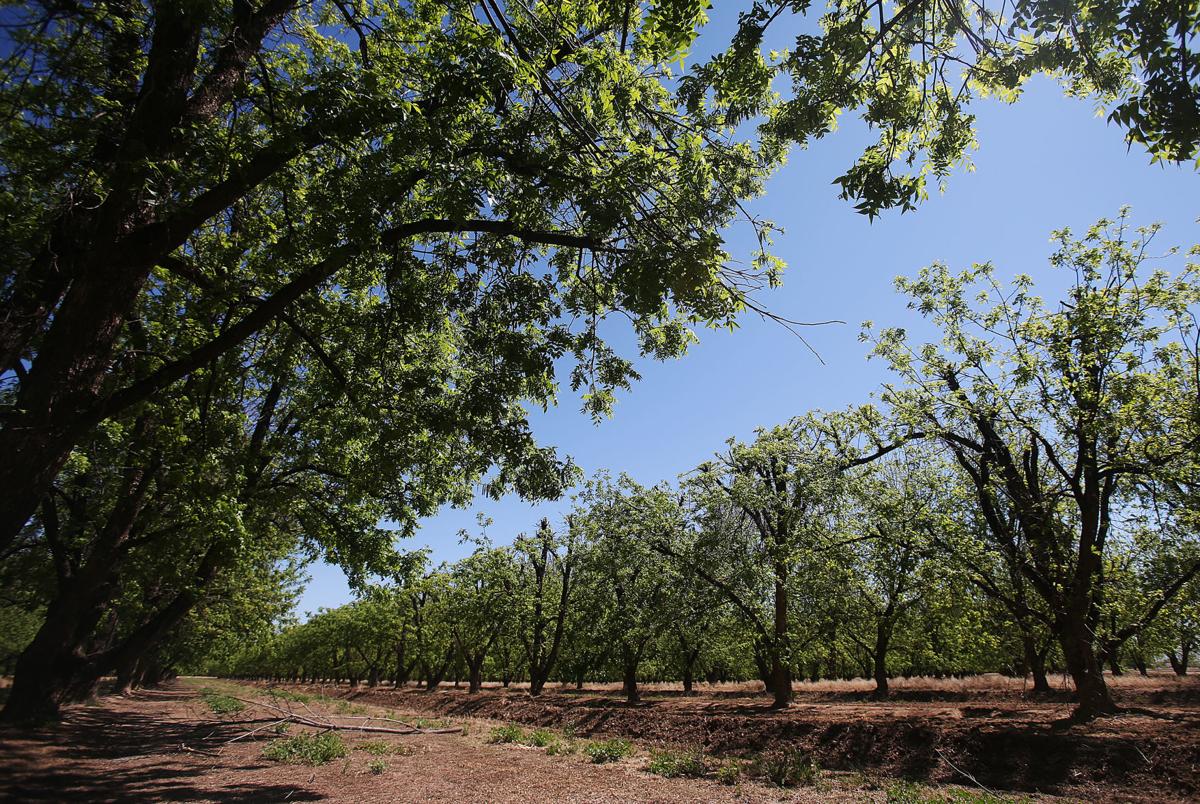 Farmers Investment Co., owner of the Green Valley Pecan Company, is building a pipeline to carry water from the Central Arizona Project terminus south of Tucson.

The study referred to the fact that when groundwater is pumped in suburban areas — often leading to significant drops in water tables there — developers, companies and others are allowed to compensate by putting other water back into the ground at locations far away.

Many suburban subdivisions in Pima, Pinal and Maricopa counties do so by belonging to a three-county groundwater replenishment district. They generally use Colorado River water brought by Central Arizona Project canals, or else treated effluent, to recharge water tables and compensate for their pumping elsewhere.

The report last month from the Kyl Center for Water Policy at Arizona State University wasn’t the first such warning:

This threatens the health of environmental assets, the integrity of public infrastructure and the welfare of citizens, the Pima County report said.

In subdivisions where water is pumped far from where it’s recharged, water tables will keep falling “until the detrimental effects of groundwater pumping threaten the economic stability, environment and infrastructure of the community,” the report said.

But if effects are inaccurately predicted, for a subdivision to belong to the groundwater replenishment district doesn’t assure water will be available to serve it over the long term, the report said.

“It may be optimistic at best and foolhardy at worst to expect that the water needs of urban developments can be met by pumping water from depths approximating 1,000 feet below the surface,” said the report.

While developers pay a fee to join the district, they are off the financial hook once homes are sold, the report said. Then homeowners are saddled with an annual assessment tax that keeps rising to pay for water for replenishing aquifers, even though that water isn’t necessarily available to them, said the report.

Some towns do it, too

This practice of pumping in one place and recharging elsewhere isn’t limited to members of the groundwater replenishment district. Some towns and public water providers do it too, such as Oro Valley, Metro Water and Marana.

They own rights to CAP water but haven’t built pipelines and other infrastructure to bring it from the CAP concrete canal to their customers.

But those providers are jointly designing a $30 million project to bring CAP directly to their customers in five years, which should reduce, if not eliminate, their chronic overpumping.

Most of the replenishment district subdivisions, by contrast, have no CAP supplies and lack the financial means to bring them in.

In southern Pima County, some partial solutions may be at hand.

The Farmers Investment Co. and the Community Water Company of Green Valley are designing pipelines to bring CAP water south from where the canal now ends at Pima Mine Road south of Tucson. Both should be completed by next year, they say.

The FICO pipeline is mainly planned to take CAP to replace groundwater for the company’s water-sucking pecan groves in Sahuarita and for the Freeport McMoran Sierrita copper mine, although it will also take CAP water belonging to the Tucson Water utility.

The Community Water pipeline, which will be paid for by Hudbay Minerals Inc., the company proposing to build the Rosemont Mine, will take water belonging to Rosemont, the water company itself and other water users who can get CAP supplies, if available.

While a federal court ruling recently delayed mine construction until at least 2023, water company president Arturo Gabaldon said he has no indication that financing for the pipeline will stop. It’s already partially built, he said.

But since some of the pipeline’s water would be used to compensate for Rosemont’s pumping, it’s not clear how many other users can take advantage of it.

Looking statewide, the ASU Kyl Center report recommended that the replenishment district require all recharge of renewable water be done in the same areas where pumping for its subdivisions occurs.

It also urged the state to reduce how deep water can be pumped for new subdivisions.

The second recommendation is similar to what researchers Glennon, Megdal and their colleagues urged in their 2007 paper: a four-foot annual limit for water level declines in replenishment district subdivisions.

They also suggested using effluent to replenish aquifers, and that replenishment be done close to where pumping occurs.

Today, Megdal sits on the CAP’s governing board, and her suggestions are much more guarded. The replenishment district should be given a “careful look” by a joint legislative committee before action is taken, she said.

“This is a complex enough situation that anything you do is going to have implications for growth, and that’s always a very important topic in Arizona,” Megdal said, speaking for herself and not on behalf of CAP.

“Because of the sensitivity of the issue and polarization related to this issue,” she said, “this could be something that would benefit from an in-depth look.”

“It’s certainly something we’ll have more conversations on as we move forward with additional water management actions we’ll be taking,” Buschatzke said in a recent KAET-TV interview. “It’s a matter of who uses water and where.”

Cooke, whose agency runs the replenishment district, said in a statement that recharging water separately from where pumping occurs is common and legal when occurring in the same state water management area.

He noted that his agency’s strategic plan requires the district to replenish renewable water — “to the extent feasible” — in areas impacted by groundwater pumping by its member subdivisions and utilities.

To once again quote author Edward Abbey: "Uncontrolled growth is the strategy of the cancer cell."

The three Lower Basin states need to cut their water use by 18 percent from their average from 2000 to 2018 to bring the river's reservoirs into proper balance, conservationist and author Brian Richter says.

A “sold” sign marks the spot of a future home at The Preserve at SaddleBrooke. Residents in SaddleBrooke rely solely on groundwater for their water needs.

Farmers Investment Co., owner of the Green Valley Pecan Company, is building a pipeline to carry water from the Central Arizona Project terminus south of Tucson.