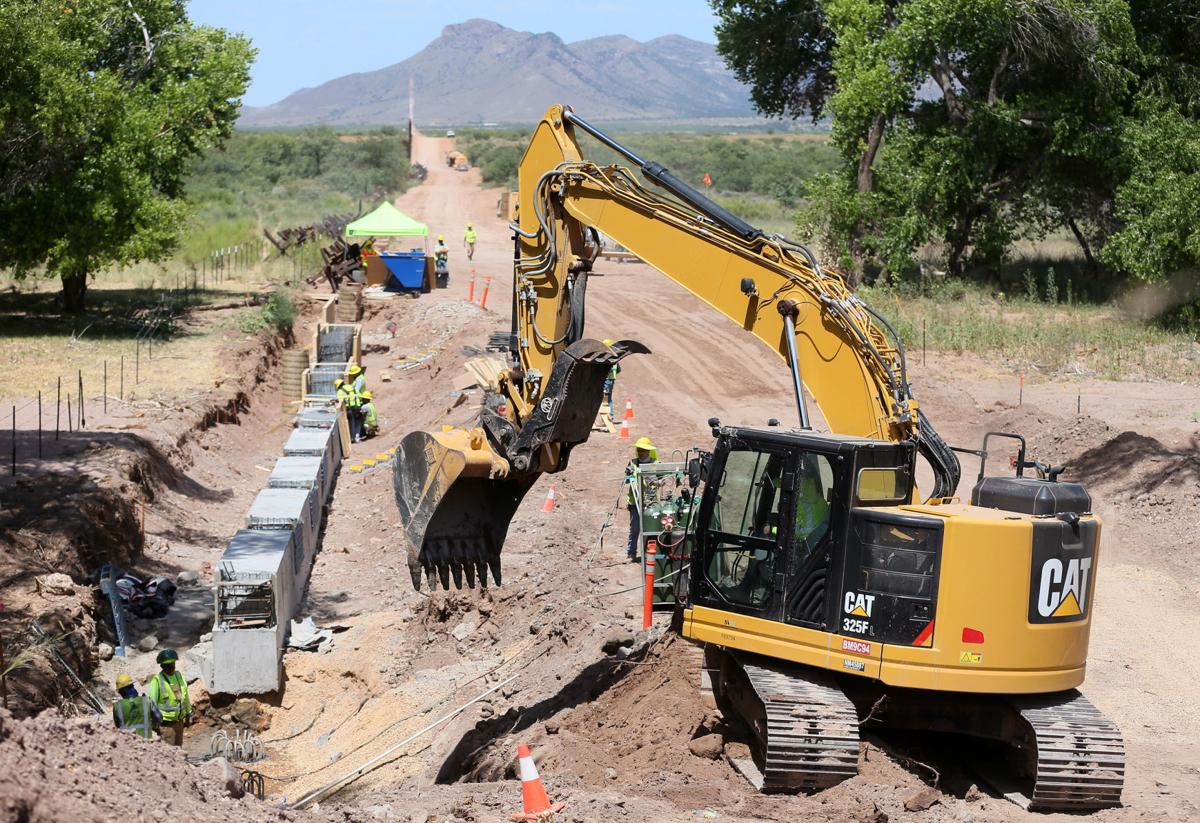 Workers pour concrete for foundations for a 30-foot-tall fence in a trench across the San Pedro River on the U.S.-Mexico border near Hereford. The project could face the possibility of numerous thunderstorms and floods during the monsoon season. 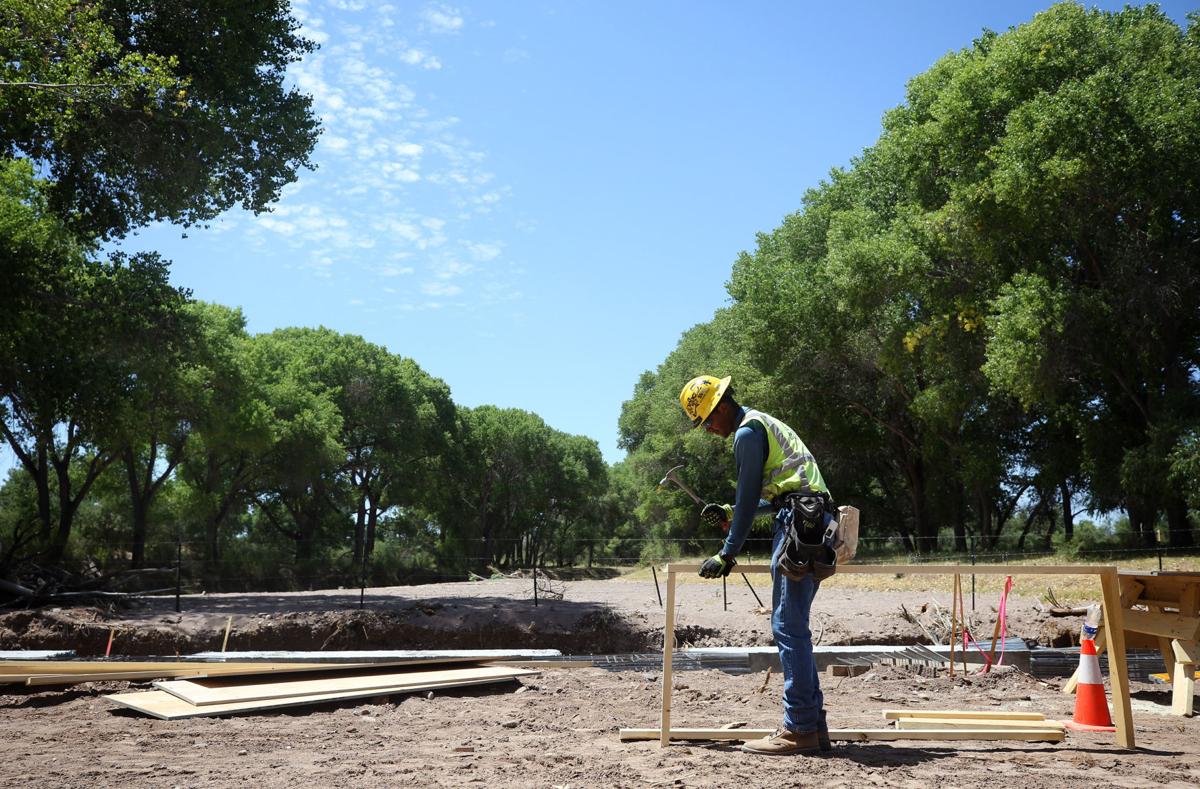 A worker continues construction on the wall across the San Pedro River near Hereford. The cost of the 20 miles of wall in Cochise County, including across the river, is $408 million.

Just as monsoon season started, construction crews began laying the foundation for a 30-foot-tall border wall across a riverbed in Cochise County.

The long-delayed project at the San Pedro River now faces the prospect of numerous thunderstorms and floods, raising questions about the wisdom of the decision to start construction, which came 13 months after the contract was awarded, and whether taxpayers will cover any costs caused by flash floods.

A visit to the river on Wednesday showed crews had dug a trench across the riverbed some 500 feet and installed much of the concrete foundation for the wall. Workers stood in the trench, which was roughly 5 feet deep, and guided an excavator on the ground above them. Pickup trucks drove across the river on a dirt road built for the project. No culverts were visible, and a photo taken Friday by a local resident appeared to show water pooling in the road.

The riverbed was dry Wednesday, but a week earlier more than 2 feet of water flowed through the river, according to a U.S. Geological Survey gauge under a bridge on Arizona 92 in Palominas, a small town about 5 miles north of the border.

In recent years, monsoon rains swelled the river to depths ranging from 6 feet to 17 feet, according to data on peak depths at the Palominas gauge from 1926 to 2017.

From his house about 1 mile from the river, Glenn Spencer said he can hear the river when the monsoons are at their peak.

“The water is real powerful, and it can eat up stuff real bad,” Spencer said.

Spencer is a longtime advocate for increased border security and developed his own technology to detect illegal crossings, which he says would be a far cheaper and more effective tool than the wall.

The decision to start construction during the monsoon amounted to a “roll of the dice,” Spencer said.

“If they’re not lucky, they’re going to get in trouble,” Spencer said.

When the project is complete, a wall of 30-foot-tall steel bollards filled with concrete will stretch across the river about 10 feet north of the international boundary line. The bollards are 6 inches wide and separated by 4 inches of space. A series of swing gates designed to allow water to flow unimpeded during heavy rains will be installed under the wall. A vehicle bridge will be built north of the wall.

When asked about the wisdom of starting construction in a riverbed during monsoon season, Matthew Dyman, a spokesman for CBP, said some work may be delayed due to monsoon rains.

Dyman referred questions about the potential for added costs due to monsoon damage to the Army Corps of Engineers.

Jay Field, a spokesman for the Army Corps, did not address the specific contract that includes the San Pedro River wall, but said “generally, a contractor’s liability insurance covers damages.”

In terms of the potential for damage from the monsoons, “critical components of the fence and the bridge structures that needed to be constructed in dry conditions have been completed,” Field said. “Work on the remaining components is not expected to be significantly impacted by potential rain.”

“The ability to predict and plan for every storm event and microburst that suddenly forms during the monsoon season and causes flooding is nearly impossible,” Traphagen said.

“The San Pedro is still a wild, free-flowing river, and by building now, as the monsoon creeps north from Sonora, Kiewit is simply rolling the dice and tempting the monsoon gods not to let out a mighty roar,” Traphagen said.

The contract for the San Pedro River project was awarded in May 2019 to Southwest Valley Constructors, a New Mexico-based affiliate of construction giant Kiewit. The river project was part of $1.3 billion worth of contracts to build 20 miles of border wall in Cochise County and 43 miles southwest of Tucson.

Field did not say how much the specific stretch of wall across the river would cost. Instead, he referred to the $408 million cost of the contract to build the 20 miles of wall in Cochise County, including the San Pedro River.

Roughly a half-mile of new wall was built recently to the east of the San Pedro River. To the west of the river, steel crossbeams known as Normandy barriers run for hundreds of feet before the barrier transitions to an 18-foot steel bollard wall built a decade ago.

The estimated completion date for the San Pedro River project is Dec. 31, according to Field.

“A new level of recklessness”

The monsoon season could add to the San Pedro River project’s already troubled history. As soon as the project was announced, environmental advocates warned a wall could lead to a dangerous buildup of water and debris during monsoon rains, which would cause damaging floods through a riparian area cherished by bird-watchers, local residents and outdoor enthusiasts.

The initial design for the wall was rejected by Customs and Border Protection officials for not adequately accounting for flood risks. The final design for the project wasn’t approved until more than a year after the contract was awarded. Even now, the design for the bridge across the river is still being reviewed. Meanwhile, crews built nearly 40 miles of wall east of Douglas and southwest of Tucson since last summer.

“Walling off a powerful desert river at the height of monsoon season is a new level of recklessness,” said Laiken Jordahl, borderlands campaigner at the Tucson-based Center for Biological Diversity.

“The administration has steamrolled the public, stonewalled elected officials and blocked a wildlife superhighway to turn this despicable project into a reality,” Jordahl said. “The border wall has always been unhinged from reality, and this section proves it.”

The border wall was the centerpiece of the Trump campaign’s immigration agenda in 2016, but the administration did not start building the wall until two years later. Now, the administration is trying to complete 450 miles of wall before the election in November.

The Trump administration has pulled together $15 billion to build 738 miles of border wall, including nearly $10 billion from the Defense Department, according to a July 2 status report provided by CBP. So far, nearly 230 miles of 30-foot-tall wall have been built along the length of the U.S.-Mexico border.

The 9th U.S. Circuit Court of Appeals ruled recently that the Trump administration illegally sidestepped Congress by pulling funds from the Defense Department to build the wall. However, construction can continue while the administration appeals to the Supreme Court.

Two high-ranking border officials came to Tucson on Monday to tout President Trump’s border policies and to berate Twitter for locking one of them out of their account last week.

Monday’s news conference was the latest in a string of recent visits by Trump administration officials to Arizona, which could become a key swing state in the presidential election. Both President Trump and Vice President Mike Pence visited Arizona in recent weeks, as did Education Secretary Betsy DeVos and Secretary of the Interior David L. Bernhardt.

Both officials were effusive in their praise of President Trump’s border policies, particularly the construction of roughly 400 miles of 30-foot-tall border wall and the sharp drop in border apprehensions since last year when hundreds of thousands of asylum-seekers arrived at the U.S.-Mexico border.

Cuccinelli cited “unprecedented achievements” by the administration, which “put its promises into action.” He praised Trump’s “relentless leadership and drive.”

Among those achievements was the seizure of more hard drugs, such as fentanyl and methamphetamine, in the last four years than in the previous eight years.

The administration “took bold action” to address the crisis at the border last year and listened to what Border Patrol agents said they needed at the border, Morgan said.

“To me, as acting commissioner, this is very much an apolitical statement when I say that this president listened and this president delivered. That’s just a fact,” Morgan said.

Neither official seemed concerned about the propriety of DHS officials making what could be seen as a campaign stop for President Trump hours before the polls open.

When asked why the officials came to Tucson the day before the presidential election and whether the visit could be viewed as an effort to sway voters, Cuccinelli said he hadn’t been to the Arizona border yet and the state was “on the cycle to do.”

“We don’t stop doing our job because there’s an election coming or going and this is part of that whole effort,” Cuccinelli said.

The second focus of Monday’s news conference was a tweet posted by Morgan on Oct. 28, which prompted Twitter moderators to take it down and lock Morgan out of his account for about 20 hours.

Morgan’s Oct. 28 tweet said that CBP and the Army Corps of Engineers “continue to build new wall every day. Every mile helps us stop gang members, murderers, sexual predators, and drugs from entering our country. It’s a fact, walls work.”

“There was no reason to remove Mr. Morgan’s tweet from your platform, other than ideological disagreement with the speaker,” Wolf wrote. “Such censorship is disturbing.”

Construction crews have begun laying the foundation for a 30-foot-tall border wall across the San Pedro River in Cochise County.The long-delay…

Arizona Daily Star photographer Kelly Presnell captured the power and beauty of the monsoon. Check it out in this photo gallery.

Workers pour concrete for foundations for a 30-foot-tall fence in a trench across the San Pedro River on the U.S.-Mexico border near Hereford. The project could face the possibility of numerous thunderstorms and floods during the monsoon season. 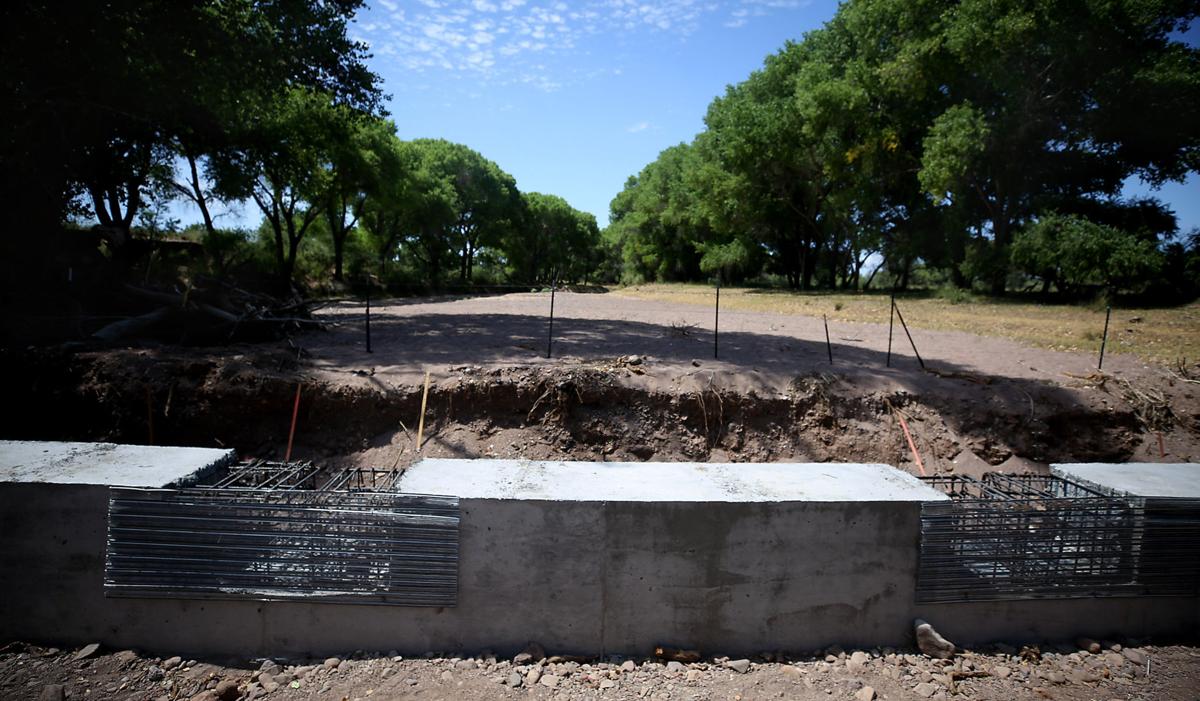 “Critical components of the fence and the bridge structures that needed to be constructed in dry conditions have been completed,” said Jay Field, a spokesman for the Army Corps of Engineers. 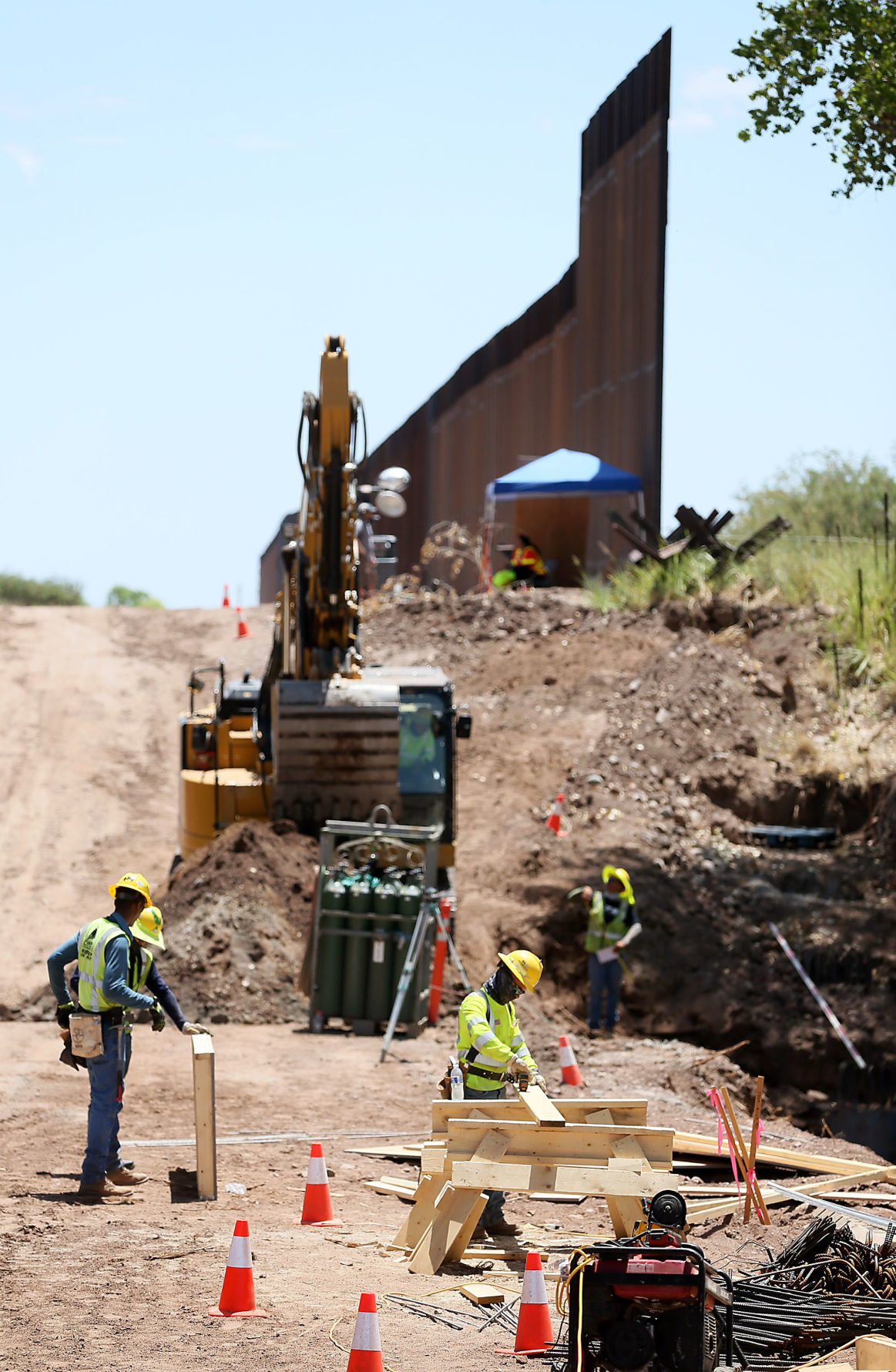 The estimated completion date for the San Pedro River wall project is Dec. 31, according to Jay Field, a spokesman for the Army Corps of Engineers. 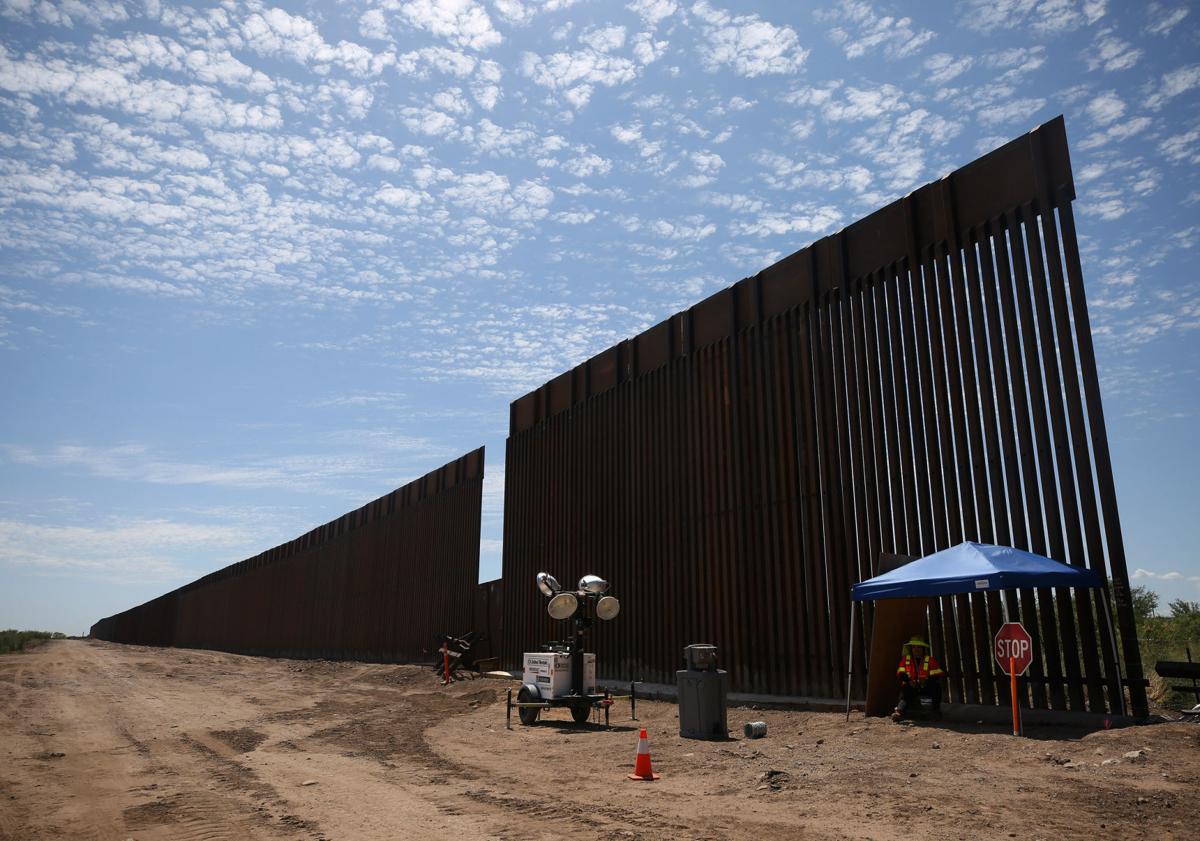 The new border wall is made up of 30-foot-tall steel bollards that are 6 inches wide and separated by 4 inches of space. So far, nearly 230 miles of the wall have gone up.

A worker continues construction on the wall across the San Pedro River near Hereford. The cost of the 20 miles of wall in Cochise County, including across the river, is $408 million.