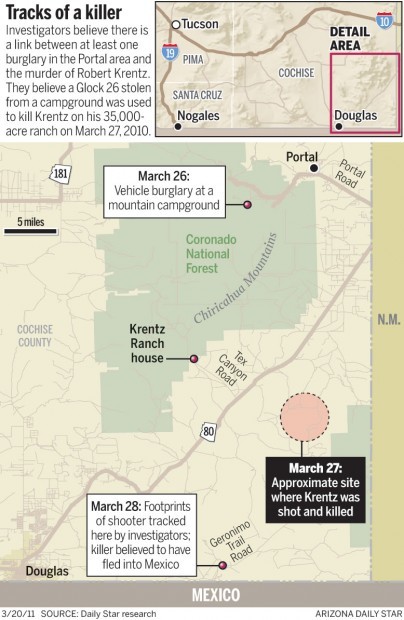 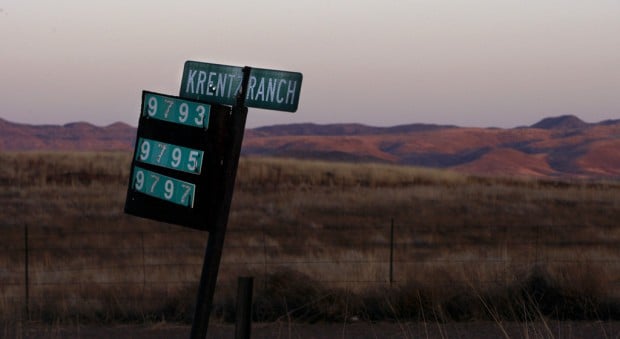 The broad grasslands of the San Bernardino Valley, where the Krentz Ranch is located, extend south into Sonora. Rancher Robert Krentz was killed while working alone on his property. 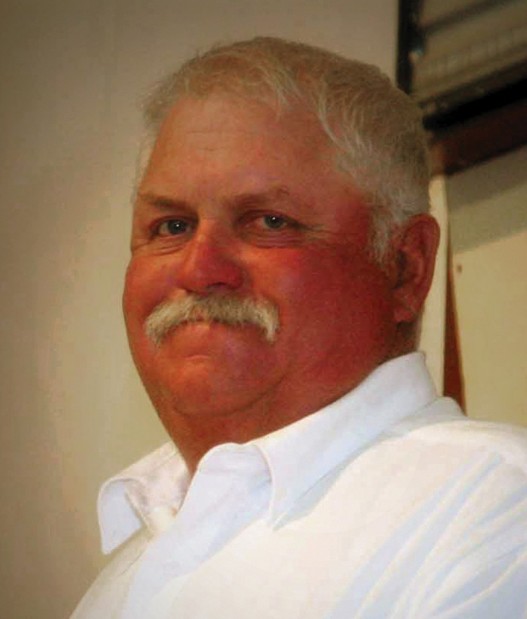 Brothers Phil, left, and Robert Krentz in a tack room.

is called "person of interest" in the case. 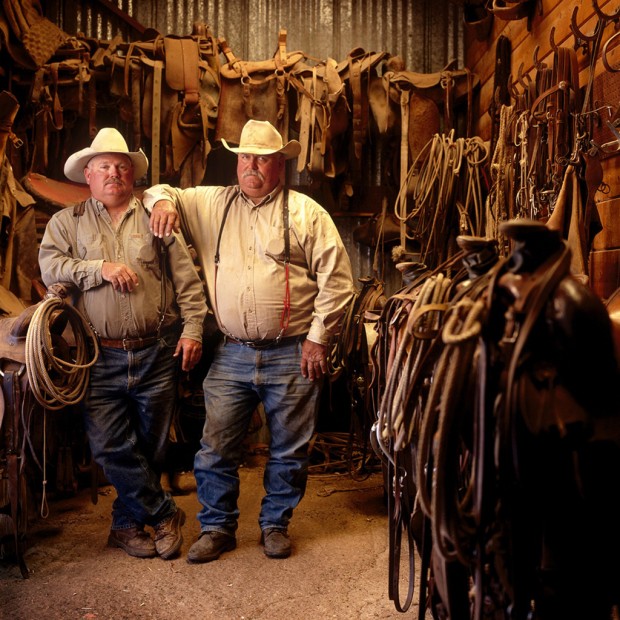 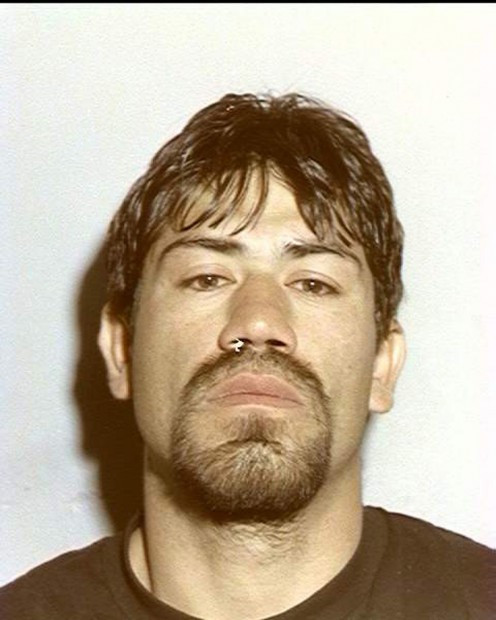 DOUGLAS - The murder of a prominent Cochise County rancher that triggered a nationwide outcry about border security remains unsolved a year later.

Investigators have identified a man who fits the description of the possible killer - a tall, cross-border smuggler with a violent criminal record. But they don't know for sure if he's in the U.S. or Mexico - or if he's dead or alive.

And even if they find him, it won't mean the crime is solved. Authorities haven't found the gun used to kill Robert Krentz on his ranch last March 27, and they have no witnesses, show investigation documents the Daily Star obtained through public records requests.

Alejandro Chavez-Vasquez is not an official suspect in Krentz's murder but is a "person of interest" in a series of Portal burglaries in early 2010, say Cochise County sheriff's officials.

Investigators believe there is a link between two of those burglaries and the murder, documents show. A search warrant affidavit filed in Cochise County Court on March 31, 2010, by Immigration and Customs Enforcement shows investigators believe the burglar who stole a Glock 26 handgun and two cellphones from a vehicle near the town of Portal the day before is the person who killed Krentz.

The federal agency has been assisting the Cochise County Sheriff's Office with the case.

Krentz was murdered with the same caliber firearm that was reported stolen from the car, the affidavit said. The burglary occurred in the Herb Martyr campground in the Chiricahua Mountains about seven miles southwest of Portal, a Cochise County Sheriff's Office report shows.

Investigators have homed in on Chavez-Vasquez because of his height - 6 feet 3 inches - and criminal background. The shoe prints tracked from the crime scene about 20 miles south to the border were size 11, said Warner Glenn, a mountain lion hunter who helped track the prints. Based on the shoe size and 31-to-32 inch stride, Glenn and investigators estimate the killer is at least 6 feet tall.

Footprints of the same size and pattern were found at the campground vehicle burglary and at an area home that was likely burglarized during the day of March 27, shows a Cochise County sheriff's report.

Chavez-Vasquez, likely in his late 30s, has convictions in four states for crimes including sexual assault, vehicle theft and possession of narcotics. He also pleaded guilty in 2004 to illegal re-entry after deportation.

Agua Prieta police distributed 500 pictures around the border city south of Douglas, but nobody claimed to know anything about Chavez-Vasquez. They also ran his name through municipal, state and federal databases throughout Mexico but found nothing - no property, no voter card, no driver's license, Novoa said.

And so one of 2010's highest-profile murders - one that helped prompt Arizona's tough new immigration law - remains a mystery.

Many of the questions that surfaced in the days following Krentz's murder remain unanswered: Why would someone kill a man known to family and friends as a teddy bear? Was the killing to punish the Krentz family for a call his brother made to the Border Patrol the day before about bundles of marijuana found on their property? Was Krentz targeted or was the killing random? Did it mark a sea change in the long-held rule among smugglers that they lie low in the U.S. for the good of their business?

There's no closure for Krentz's heartbroken widow, children and grandchildren. There's no explanation for shaken ranchers desperate to know if they should be worried for their own safety in this remote valley near the Arizona-New Mexico state line.

"We would like to know what the heck happened," said Bill McDonald, a fifth-generation rancher east of Douglas. "It doesn't make any sense to us."

Cochise County Sheriff Larry Dever would not answer specific questions about the investigation but said his office believes the killer was involved in smuggling people or drugs in Cochise County.

"Rob Krentz was killed by a bad person with a bad agenda, and our porous borders continue to contribute to the potential for another event," Dever said via email.

The investigation has momentum in the U.S. and in Mexico, where officials have been extremely helpful, Dever wrote. There is a $45,000 reward for information.

"I will never rest until this killer is brought to justice," Dever wrote.

But as days and months pass, fewer people believe the murder will be solved.

"The older the case gets," said Richard Winkler, a Krentz family friend and former Cochise County Superior Court Judge, "the harder it gets to solve."

The case so far

He was likely long gone by the time they followed his tracks to the border the next afternoon. Without a suspect to follow, investigators looked to the burglaries for clues. Immigration and Customs Enforcement officials hoped the call history of the two cellphones stolen from the campground near Portal would lead lead them closer to the killer.

One was used the day of the robbery to call two phone numbers, phone records obtained through a search warrant show. But the names of the people called that day didn't help: The numbers were registered to famed Mexican Revolution generals Pancho Villa and Emiliano Zapata.

In Mexico, authorities began searching for the killer the day after Krentz was found. State police looked for shoe prints and talked to ranchers near where he crossed over.

On the Monday after the killing, Agua Prieta police brought in about 100 people for questioning, fingerprints and photos in an attempt to find somebody who knew something about the crime, said Novoa, the Agua Prieta police chief. They didn't yet have any information about the size of the shoe or gun used, so they focused on people who had scrapes or bites, thinking that maybe the killer was bitten by Krentz's dog or otherwise hurt, Novoa said. But they didn't find anything.

In the U.S., investigators also interviewed people who might have information. One was a man arrested by the DEA on April 6 who officials thought might know something due to his associates and location of the arrest. He denied knowing anything about the murder.

Another was a suspected smuggler apprehended by the Border Patrol on April 8 who normally works in the corridor east of Douglas. He denied knowing anything about the crime but said the talk was that the "cartels were pissed because there was too much heat, and they were not able to easily get people and drugs through."

On April 9, Immigration and Customs Enforcement and the Border Patrol put out alerts to cover an area within a 15-mile radius of the crime scene with special emphasis on "6-foot-tall or taller smugglers, guides and repeat offenders," Cochise County Sheriff's Office reports show.

Chavez-Vasquez appears to be the only person being sought in the murder.

Chavez-Vasquez has criminal convictions in four states - Colorado, Utah, Nevada and Oregon - and an immigration charge out of Arizona.

He spent two years in a Nevada prison, from 2002 to 2004, on a coercion conviction that stemmed from an arrest by Las Vegas police on suspicion that he attempted to sexually assault a woman.

He was paroled on April 15, 2004, from Nevada prisons, records from the Nevada Department of Corrections show.

A month later, he was arrested in Arizona and charged in U.S. District Court with illegal re-entry after deportation. He was given 36 months' supervised release and a fine of $100 in a plea agreement, federal records show.

His criminal records show four birth dates that put him between 37 and 41 years old.

Though the Cochise County Sheriff's Office said Chavez-Vasquez was from Agua Prieta, the police chief there said he doesn't believe it.

"If somebody knows that 60 to 80 police officers are looking for a person, some kind of information arrives," Novoa said in Spanish.

To say 2010 was a nightmare for Susan Krentz would be a gross understatement.

She lost her husband in March, and on Sept. 25 a suspected drunken driver hit her and a friend as they left church in Douglas. She suffered several skull and hip fractures and is still seeing doctors regularly, said her attorney, Paul Hoffman of Tucson. "She is lucky to have lived," Hoffman said.

In addition to dealing with her injuries, she misses her husband dearly. "All I can say is that my heart is broken, and I can't get over it," she said in a brief phone interview.

"We never asked to ride this horse that we are on, but it is saddled now and we must go on," said a family statement issued this month. "We are still searching for the truth of what happened that day and hope to someday put closure to this tragedy."

The Krentz family is frustrated with the investigation, said Don Kimble, a cousin of Sue Krentz's. Though a close friend of Sheriff Dever, Kimble doesn't hold back his criticism of the Sheriff's Office for waiting for the suspected killer to surface. "I think they should be more aggressive," Kimble said. "Hanging back and watching never gets nothing done.."

Kimble thinks authorities should more aggressively advertise in Mexico the cash reward for information about the murder. "I truly believe that if the money got placed in the right hands, the killer would show up," Kimble said.

Friends and neighbors in the hourglass-shaped San Bernardino and San Simon valleys near the Arizona-New Mexico state line are still troubled by the killing.

A noticeable boost in Border Patrol agents and technology there has slowed illegal activity a bit, but the smugglers keep coming. "The outlaws and dope and the guns are still here," said Ed Ashurstwho manages a ranch just north of the Krentzes and helped track the killer's footprints. "There is this combination of anger and depression and cynicism."

Ashurst believes his friend simply ran into a criminal who was intent on not getting caught and sent back to prison.

"I was worried the moment he got into Mexico that they were going to be able solve this," said fellow rancher Bill McDonald. "I continued to be worried despite assurances to the contrary."

Although authorities don't know whether Krentz's killer is still alive, what Sheriff Dever said about him during a press conference on March 29, 2010, still rings true a year later: "He is the only person living that knows exactly what happened out there that day."

On StarNet: Go to azstarnet.com/gallery for more photos.

Who was Robert Krentz?

The broad grasslands of the San Bernardino Valley, where the Krentz Ranch is located, extend south into Sonora. Rancher Robert Krentz was killed while working alone on his property.

Brothers Phil, left, and Robert Krentz in a tack room.

is called "person of interest" in the case.