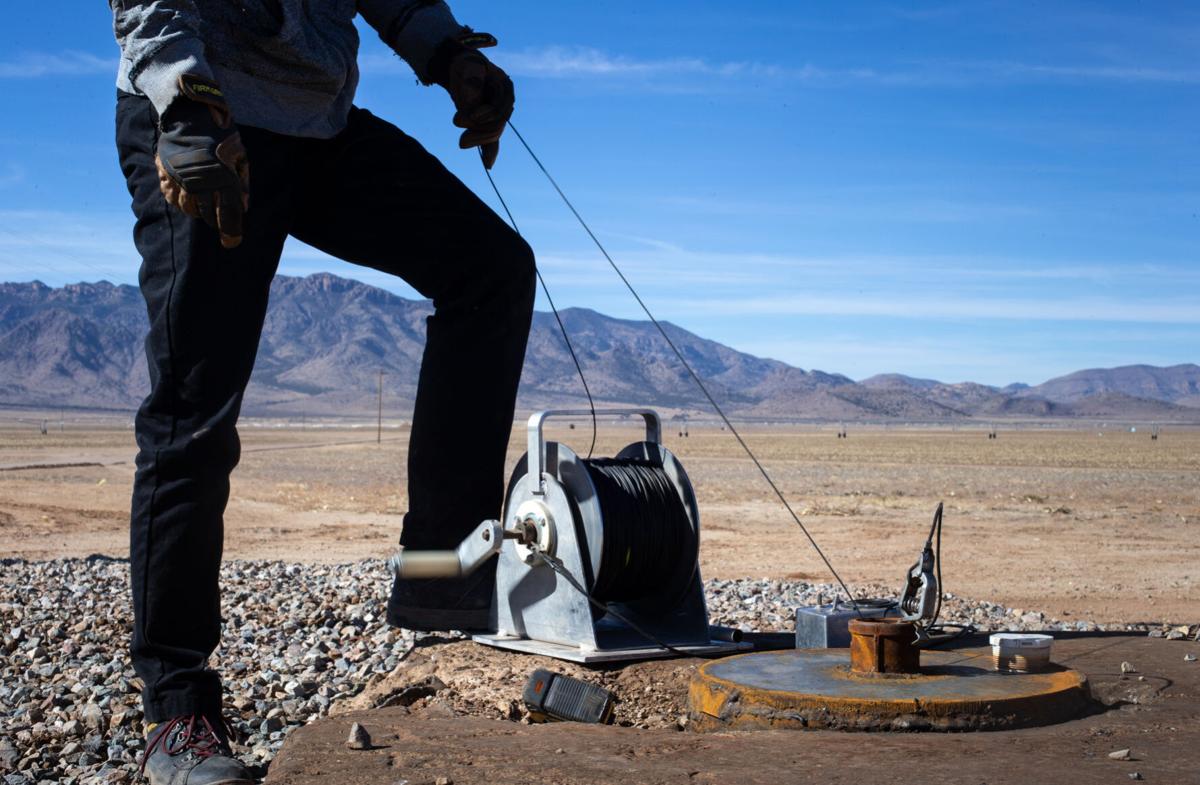 Considering all aquifers across the bottom half of Arizona, the new study estimates they had lost more than 5.7 million acre-feet — the equivalent of more than three years’ worth of CAP supplies for the entire state. 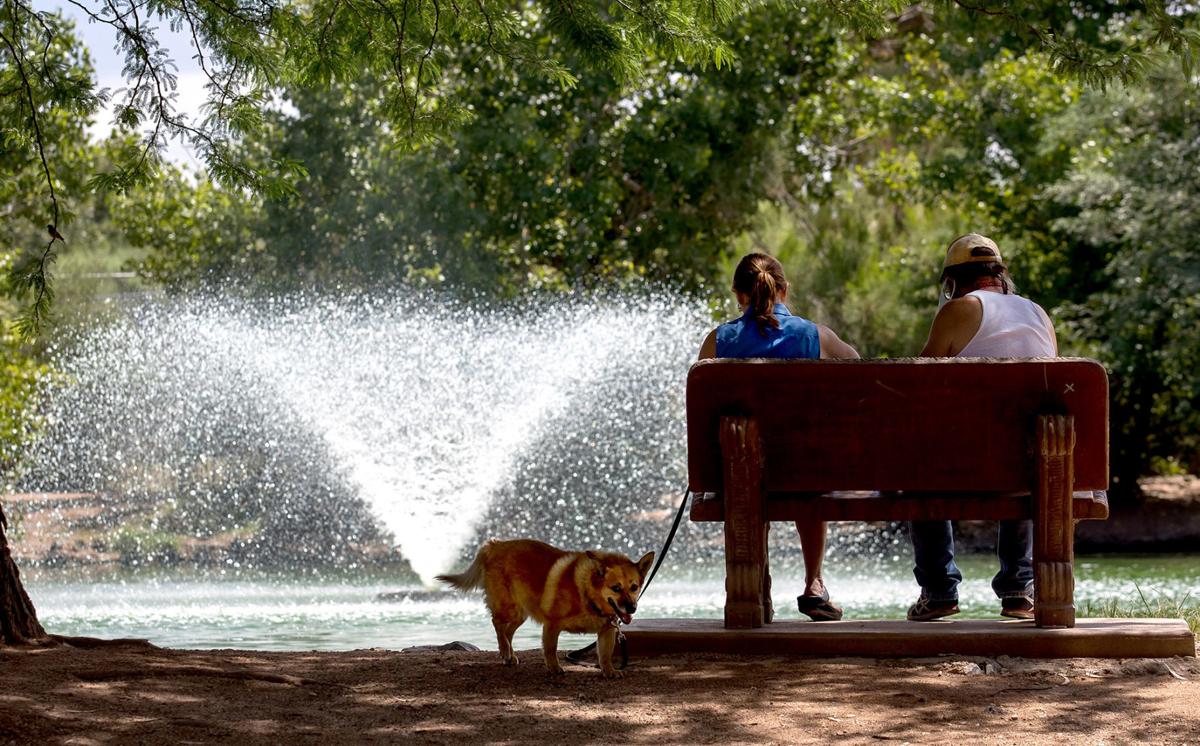 A new federal study warns that the hottest weather Tucson is likely to get in the future would reduce natural replenishment of our aquifer by rainfall and runoff down streams and washes.

Climate change, a known threat to the Colorado River, stands a good chance of cutting into the Tucson area’s future groundwater supplies, too, a new study says.

The U.S. Bureau of Reclamation study warns that the hottest weather Tucson is likely to get in the future would reduce natural replenishment of the aquifer by rainfall and runoff down our streams and washes.

At the same time, if the urban area’s growth continues its outward spread as it’s done since World War II, that could also reduce the amount of renewable water going into the aquifer to replenish it after new developments pump it out, the study said.

The study based its projections on a number of computer model analyses. It concluded that in a very hot future climate, and with continued sprawl, the aquifer could by 2060 hold less than half the amount of groundwater that it would hold if the climate stayed about the same as today and our growth became more compact.

The warnings add to the challenges this region could face with its water supplies due to climate change.

They come after numerous studies have said the Colorado River already lost flows since 2000 and is likely to suffer deeper losses over the next few decades if warming trends continue. The river provides most of Tucson’s water, bringing it via the Central Arizona Project canal.

In addition, yet another recent study found that drought and other factors have already reduced the amount of groundwater in several Southwestern aquifers since the turn of the 21st century.

Published in November, that study used satellite-based data to find that drought, possibly linked to climate change, combined with increased water demand, significantly reduced groundwater supplies from 2002 to 2017 in several aquifers, including in Arizona.

The study was prepared by 19 co-authors, including retired U.S. Geological Survey hydrologist Don Pool of Tucson, and published in the journal Water Resources Research.

Considering all aquifers across the bottom half of Arizona, the study estimated they had lost more than 5.7 million acre-feet — the equivalent of more than three years’ worth of CAP supplies for the entire state. A lot of that was due to agricultural pumping, Pool said.

The study found even bigger losses in groundwater occurred in the arid high plains of Oklahoma and Texas and California’s Central Valley. Aquifers gained ground in several wetter regions in the Southeast, Midwest and Pacific Northwest.

The bureau study’s findings, meanwhile, underscore why University of Arizona climate scientist Kathy Jacobs says it’s not certain that Tucson Water will be able to draw on enough natural groundwater recharge from rain to avoid over-pumping its aquifer should its CAP supplies be cut substantially in the future.

The utility says it can still provide adequate supplies to Tucson without resorting to over-pumping, even if it loses half to three-fourths of its CAP supplies.

That’s because its aquifer will still be replenished at rates exceeding how much it would have to pump, the utility says.

The Bureau of Reclamation study was prepared as part of a much broader, five-year, $2 million research project the agency is conducting on the Tucson area’s Lower Santa Cruz River Basin.

The study, when finished this fall, will identify where additional water resources will be needed to compensate for future imbalances between demand and supplies.

It’s also aimed at developing local strategies to improve the reliability of water supplies in this area for cities, farms, industries, culture and the environment.

The part of that study dealing with climate change and groundwater is in draft form and won’t be released until the overall study becomes publicly available early next year.

The Star obtained slides from the draft study that were made available at a recent virtual workshop on the bureau project, attended by about 60 people.

The bureau study traces the history of Tucson’s aquifer back to 1940, a time of little or no over-pumping of groundwater.

As agriculture and then urban development boomed after World War II, pumping lowered the water table by more than 200 feet until the early 2000s. Before the CAP arrived, Tucson was totally dependent on groundwater.

Then, Tucson Water began to slowly replace its pumping with CAP water, which it stored in the ground in basins in the Avra Valley and south of the city along Pima Mine Road.

The gradual phaseout of groundwater pumping has caused aquifer levels to rebound significantly in some areas, up to 240 feet in Avra Valley and 65 feet in Tucson Water’s main central city wellfield.

But looking ahead to 2060, the new study examined impacts of six possible growth and climate scenarios, warning:

Warmer temperatures will reduce groundwater recharge because hotter weather will cause more water in streams and elsewhere in the ground to evaporate, bureau officials said.

Plus, if CAP deliveries are cut back due to climate change, local governments will have less renewable water to recharge into groundwater basins.

As for growth patterns, if growth keeps spreading outward away from established cities and towns, it will lead to more and more development that’s served by water utilities that haven’t demonstrated legally that they have an assured, 100-year water supply, the bureau said.

State law requires that utilities demonstrate a century’s worth of water supply before allowing new development.

So to build in those areas, developers would have to join a three-county water district that buys and recharges CAP water — but usually somewhere far from where the pumping occurs.

While the overall aquifer may still have the same amount of water, localized aquifers where pumping occurs could keep sinking further.

How will we leave the basin for future generations?

The prospect of declining recharge is a concern because it further restricts the path this area has to water sustainability, said Meixner.

“The goal is long-term balance and right now we’re in a good place,” because CAP use is enabling the aquifer to rise, he said.

But if Colorado River deliveries and natural recharge decrease, and over-pumping resumes, “You are extracting money from the bank your children or grandchildren are going to rely on,” Meixner said.

“You need to plan for long distance reliability of supplies,” he said, “so we leave the basin in a better place than we found it.”

On the positive side, the study shows how well our recharge of CAP into the ground has helped balance the aquifer between supply and demand, Meixner said.

It also shows that even if CAP supplies and natural replenishment of the aquifer were to diminish, the aquifer would still contain more recharged water in 2060 than it did in 2004, when CAP recharge was just beginning, he said.

Eric Holler, a retired Bureau of Reclamation engineer, was running its Tucson office when this study began. He said he completely agrees with the basic concerns expressed by the study that climate change could reduce our natural recharge and restrict our water supplies.

But he was very skeptical that the future levels of recharge and other groundwater storage in this area will turn out even close to the amounts projected. That’s because of the study’s reliance on computer models for forecasting, he said.

“I am 100% confident it’s not going to happen the way they think it’s going to happen,” Holler said. “You have to have a well-calibrated model to look ahead even 20 years. Forty years, forget about it. I wouldn’t bet 100 bucks on a future like that.”

Meixner said he agrees that the models used in this study shouldn’t be considered an absolute forecast that “this is what will happen. They should be used to give you an idea of what you should prepare for. It’s not a crystal ball.”

Get past the political bluster surrounding climate claims and explore the data for yourself here. View changes and consequences of our weather and climate.

How does climate change affect your state and town? See the data here.

Climate and data scientists agreed U.S. weather station data show a clear sign of human-caused climate change. Read on to find out more about this issue and how it affects your state and town.
National News
editor's pick spotlight AP

Since 1980 high-cost disasters such as hurricanes and flooding have totaled more than $1.75 trillion in damage. They're becoming more frequent, and more damaging.

The 20 US cities most threatened by sea level rise

The residents of this small riverside town have become accustomed to watching floods swamp their streets, transform their homes into islands and ruin their floors and furniture.

Even if 50 to 75 percent of our CAP supply is cut, Tucson Water can supply its customers without over-pumping the aquifer, officials say. But there's a red flag — climate change.

Farmers will bear the brunt of the first round of major Central Arizona Project water cutbacks expected in 2022. But the ongoing heat-aggravated drought could bring cuts to Phoenix-area cities in 2023, though not to Tucson.

Don't expect Miracle May this month on the Colorado River

That forecast is one more piece of bad news for the Central Arizona Project, which expects a first-time shortage in water deliveries.

Considering all aquifers across the bottom half of Arizona, the new study estimates they had lost more than 5.7 million acre-feet — the equivalent of more than three years’ worth of CAP supplies for the entire state.

A new federal study warns that the hottest weather Tucson is likely to get in the future would reduce natural replenishment of our aquifer by rainfall and runoff down streams and washes.