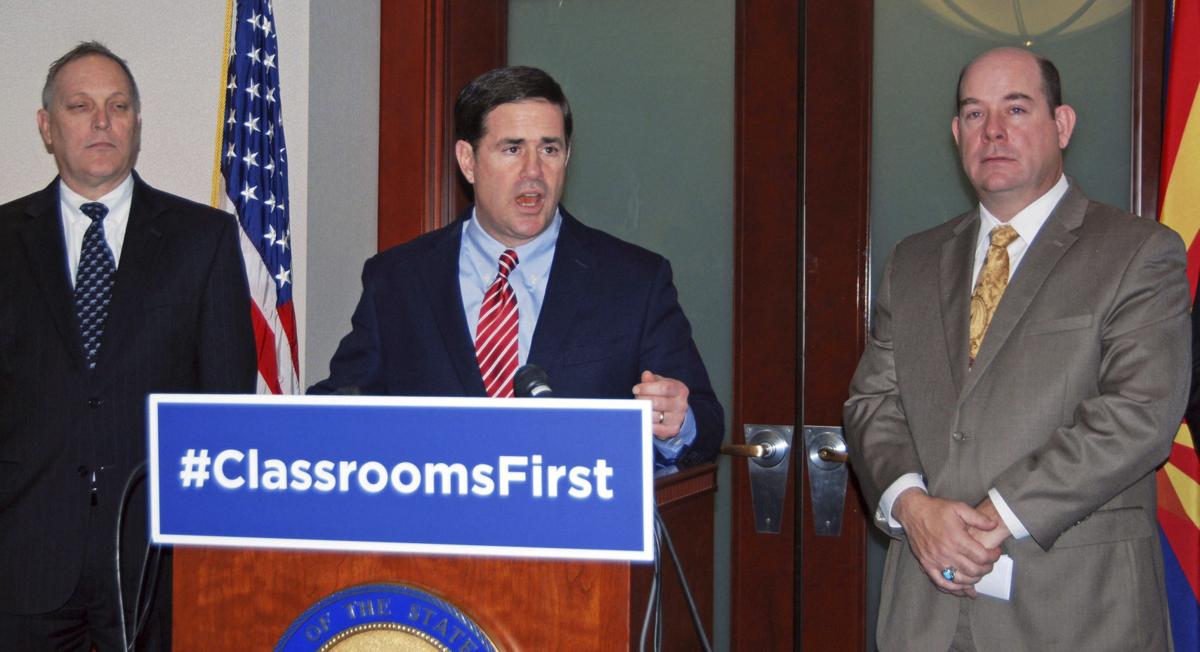 When state House Speaker David Gowan toured Andrada Polytechnic High School in Vail on April 27, he learned about the health-care and biosciences programs there, and he even played bass with the school’s rock band.

He also got a money-saving tip: Under the guidance of expert teachers, auto shop students at Andrada High School repair vehicles for members of the public for minimal cost. They only charge for discount-priced parts and a nominal labor fee.

Over the next month, Gowan took in three vehicles for service. The total savings, compared to having the work done at a regular shop, adds up to about $1,000, auto shop teacher Jim Nelson estimated.

Gowan’s use of the shop disturbed enough people that word of it spread around town and up to Phoenix over the last couple of weeks. Why did it disturb them, when anyone can use the service? In March, the budget passed by the chamber he leads included $30 million in cuts that begin in 2016 and could spell doom for all the state’s JTED, or Joint Technical Educational District, programs, such as Andrada’s auto shop.

You might call it hypocrisy, or maybe chutzpah, or maybe simple naivete on Gowan’s part as to how such a thing looks.

This is how Stephanie Grisham, Gowan’s spokeswoman, explained it via email: “He visited the school recently and spent several hours there. He did a jam session with some of the kids and got a tour of the school, including their auto shop. He was very impressed with the students, and with the fact that they encourage community members to take their vehicles in so that students can get practical, real-world experience.”

She said that beyond the price of the repairs, he made a donation, though she didn’t know the specific amount. Principal Darcy Mentone said she knew of a $35 donation.

Grisham said, “The head of the auto body program encouraged him to bring his vehicles in, and it is my understanding the school was very excited about it.”

Well, maybe not excited about it. Malachi Hamilton, a recent graduate of the school, told me some of his classmates had demonstrated against the JTED cuts, but they were professional about Gowan’s minivan: “When we worked on the car, we didn’t have any grudges against him.”

In today’s business section, my colleague Luis Carrasco explains how the 7.5 percent cut passed by the Legislature and signed by the governor in this year’s budget could create a fatal downward spiral in funding for the state’s JTED programs. Business owners and education officials are shaking their heads at the shortsightedness of the move.

The episode underscores the problems in the way Gowan, a Sierra Vista Republican whose district includes the far eastern Tucson area, led the House during his first session as speaker — and big improvements he could make next year. This was the first time a Southern Arizona legislator has led the House since 1988.

Granted, Gowan, Senate President Andy Biggs and Gov. Doug Ducey faced a big problem when they started the legislative session in January — a billion-dollar shortfall. Because they refused to consider any increase in taxes, or even closing tax loopholes, their solutions were limited largely to spending cuts.

Gowan made a point of running the House in a courteous manner toward all, even Democrats, and was deferential to committee chairs. Those are generally good qualities. But then came March.

Ducey had not proposed cuts to JTED in his budget plan — in fact, it’s a program he favors — but Rep. Justin Olson, the chair of the appropriations committee, got a $30 million cut into the budget deal that Ducey, Biggs and Gowan agreed to and announced March 4.

Then the race was on. In the old days, a couple of decades ago, budgets were built from the ground up, with committee hearings and testimony from the leaders of the state government’s departments. Now, building the budget is a top-down process, made behind closed doors by legislative leaders and the governor.

After they come to a deal, they twist arms and schedule votes as quickly as possible, before their fragile majorities fall apart. It was on the day when Gowan and Biggs were trying to pass the budget, March 6, when Rep. Rusty Bowers, a Mesa Republican, went to Gowan asking to change the JTED cut, Bowers told me Friday.

“Our speaker didn’t bat an eye,” Bowers said. “He said if you can find a way to take a cut but model it so that it makes a minimum impact, go ahead.”

The problem: They only had a couple of hours to get the job done.

Bowers and his fellow defenders of JTED were able to change the straight $30 million cut to a percentage cut that considers the interests of both school districts and JTED programs.

In the end, it didn’t add up. The way the cuts are structured, they give districts financial incentives to eliminate JTED programs, thereby reducing the number of students in the program and therefore reducing the amount of state funding districts get for the programs. It creates a financial downward spiral.

“I believe it was unintentional,” said Tina Norton, assistant superintendent of the Pima County JTED. “It took many of us, who work this every day, days and weeks to look at the impact.”

Gretchen Jacobs, a lobbyist who works for the JTED programs at the Capitol, told me, “If there had been a full understanding by legislators of the impact of this cut, there’s no way this would have passed.”

So why did it happen? Because Gowan and Biggs insisted on the top-down, now-or-never approach to budgeting. They created a false sense of urgency, and as a result, mistakes happened.

Now Gowan is facing a situation where even high school students are angry at him, though he doesn’t seem to be aware of it. He’s a man who enjoys the leadership position, using it often to defend business interests, but seems oblivious at times to his actions’ effects on his own constituents, or to their appearances.

About 23 percent of registered voters in his district live in Pima County, yet the budget he agreed to included an $18 million cost-shift from the state to Pima County taxpayers, higher than any other county.

Grisham told me Gowan’s use of the Andrada shop “is something that should be celebrated, not looked upon with a negative slant.”

“This isn’t about low prices,” she wrote. “This is about a public school that the Speaker visited and was impressed with.”

However, the prices are low, as I found when I made a public records request for the work orders for Gowan’s cars from the Vail school.

He paid $165 to have two brake rotors and a brake pad replaced on his Ford Freestar, for example. Nelson estimated that would cost about $550 in a professional shop. The work on the slave cylinder of his Ford Ranger cost Gowan $57, but would have cost $540 or so in a shop. The $25 he paid to get an oil filter and brake work on his Jeep Wrangler would have cost about $156 in a shop.

“We’re very conscious of who Mr. Gowan is,” Vail Superintendent Calvin Baker told me. “We treated him as we would treat anyone else in the community who wanted to have their vehicle repaired at the facility.”

But he isn’t just anybody, and I hope he sees that. He’s a person who can use his power for the good of his constituents — in this case, to ensure that the program that gave him low-priced auto service continues to exist.

The tech ed program hopes the business community will lobby for more funding, despite state's deficit.