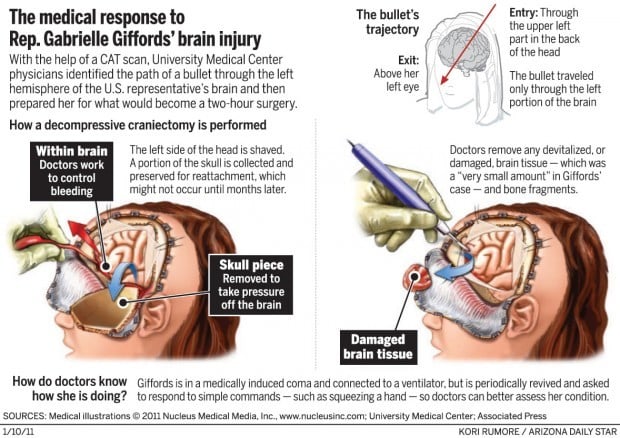 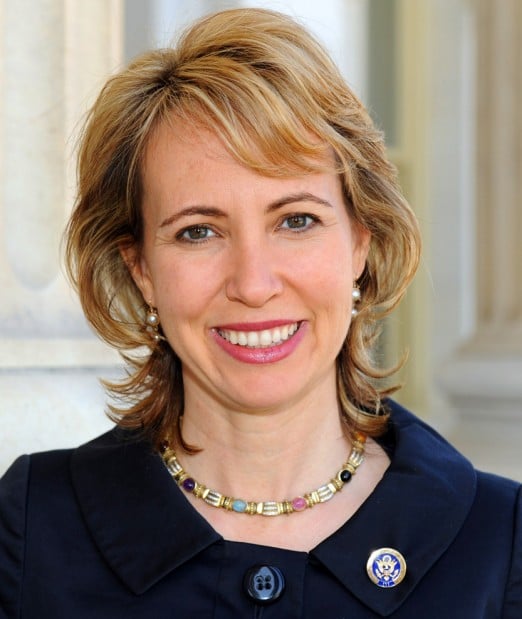 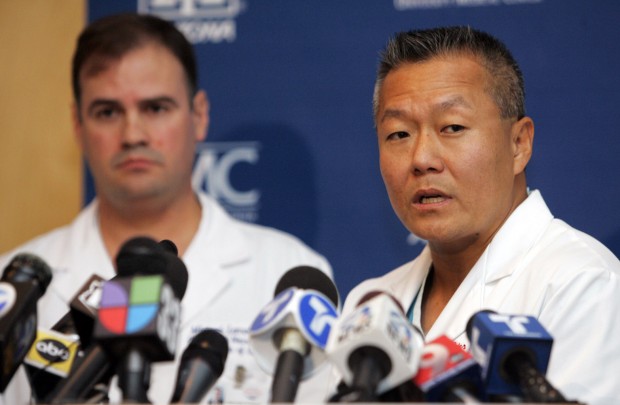 Congresswoman Gabrielle Giffords could not open her eyes and wasn't speaking Sunday, but she was responding to simple commands such as to squeeze a hand or hold up two fingers.

It's progress that one of her neurosurgeons classified as miraculous.

"One thing I want to emphasize here is we take those kinds of simple commands for granted, but they imply a very high level of functioning in the brain," said Dr. G. Michael Lemole Jr., one of the two neurosurgeons who performed Giffords' surgery at Tucson's University Medical Center.

"Brain swelling at any time can take a turn for the worse, but I am cautiously optimistic," Lemole said.

Giffords spent slightly more than two hours in surgery after she was shot through the brain Saturday. Doctors have removed half her skull to relieve pressure caused by swelling.

That portion of her skull will remain off for a month or longer to allow healing, and then doctors will reimplant it.

The 40-year-old congresswoman was shot Saturday morning as she met with constituents outside a northwest-side grocery store. Six people died in the shooting, and 14, including Giffords, were injured.

Doctors say the bullet appeared to go through the back left side of Giffords' head and exit in the front, just above her left eye socket.

The left side of the brain typically controls right-sided strength, sensation and speech, including the ability to understand simple commands.

"There is a general rule of thumb that the faster you recover, the better your recovery will be, but again, that is a rule of thumb and does not apply necessarily in all individual cases. It is not uncommon after these kinds of injuries to be in ICU for a week, maybe in the hospital for two or three weeks," Lemole said. "And no doubt there will be a rehabilitative phase, and that could take weeks to months."

When she arrived at the hospital Saturday, Giffords wasn't speaking but was responsive when people spoke to her, doctors said. Neurosurgeons performed what's is called a decompressive craniectomy, in which part of the skull was removed to give Giffords' swelling brain room to expand without being constricted by bone. The procedure is often performed on patients suffering uncontrolled brain swelling on one side.

"The surgery consisted of controlling the bleeding, which thank goodness was not severe or excessive," Lemole said.

Lemole said doctors had to remove some small parts of Giffords' brain that the bullet destroyed - but fortunately that wasn't a lot, he added. Also, surgery was required to repair a fracture that was affecting Giffords' eye socket.

He classified Giffords' condition thus far as "miraculous" given the trauma she has suffered.

Such an injury typically has a survival rate of less than 5 percent, doctors said.

"This wasn't a little grazing wound to the brain. This was a devastating wound that traveled the entire length of the brain on the left side," said Dr. Peter Rhee, medical director of UMC's trauma center. "When you get shot and a bullet goes through your brain, the chance of you living is very small. And the chance of you waking up and following commands is much smaller than that."

Giffords is on a ventilator and in a medically induced coma, but doctors are frequently waking her up by turning off the sedation to measure her progress, Rhee said.

While doctors refused to speculate on Giffords' recovery, Rhee said it is possible to see tremendous recovery from serious brain injuries, particularly among children, although adults also have been known to have good recoveries from such injuries.

"This is very early in her course. We don't know what's going to happen, what her deficits may be in the future or anything," Rhee said. "With a penetrating brain injury, it's always surprising to lay people that you think any bullet going into any brain is instant death."

But the human body has an amazing ability to compensate when injured, he said.

Doctors said the area where the bullet hit Giffords is one reason to be optimistic.

There are other reasons, too.

Medical personnel acted quickly, taking Giffords into surgery within 38 minutes of her arrival, they said.

And it's very good sign that Giffords was responding to simple commands upon arrival to the hospital, Rhee said, and responded to basic commands after surgery Sunday morning, as well.

Sometimes there's a need to drain fluid from the brain after trauma, but Giffords has not required that.

"So far, this has been a very good situation," Rhee said. "Hopefully it will stay that way."

Two of three top members of Rep. Gabrielle Giffords' medical team are recent hires who have brought national expertise to the University of Arizona's Department of Surgery.

Dr. G. Michael Lemole Jr. and Dr. Peter Rhee were both hired as part of an expansion of the surgery department under Dr. Rainer Gruessner, who has been building up the surgery team since he joined the UA from the University of Minnesota in 2007.

Lemole, a neurosurgeon, performed Giffords' surgery along with neurosurgeon Dr. Martin E. Weinand. Lemole is a leading authority on skull base surgery who became chief of neurosurgery at the UA in October 2009. He previously headed the skull base program at the University of Illinois at Chicago.

Lemole earned an undergraduate degree from Harvard, graduated medical school from the University of Pennsylvania and completed his residence in neurological surgery in 2002 at Barrow Neurological Institute in Phoenix.

As director of the trauma center, Rhee has been directing medical care of Giffords and the other shooting victims. A trauma surgeon who has worked for the military on the battlefields of Afghanistan and Iraq, Rhee is medical director of University Medical Center's trauma center. He previously worked at busy trauma centers in Seattle and Washington, D.C., and was director of the Navy Trauma Training Center at Los Angeles County-University of Southern California.

UMC is Southern Arizona's only Level 1 trauma facility, the highest designation for trauma centers. That means it's the only hospital in the region equipped to handle severe injuries that carry a risk of death or significant disability in both children and adults.

"It wasn't just one person; it was a mini-mass casualty that we had here in Tucson," Rhee said of Saturday's shooting. "The hospital, with its preparation, due to their constant practice and experience, was able to pull this thing through."

Of the 11 patients who arrived at Tucson's University Medical Center after Saturday's shooting, Rep. Gabrielle Giffords is the only one who remains in critical condition.

Nine-year-old Christina-Taylor Green was dead on arrival, and surgeons were unable to resuscitate her.

Karamargin said Giffords' family and staff were appreciative of the job the physicians are doing. But he said something more than luck and good medical care was helping her recovery.

Struggling with emotion, Karamargin said the event "turned the world upside down for a lot of people," including Giffords' staffers, who are a tight-knit unit and refer to themselves as the "Giffords family" or the "Giffords team."

Photo coverage of events and developments on the day after the shooting of Rep. Giffords and the deaths of six people.

Photo coverage of events and developments surrounding the shooting of Rep. Giffords and the deaths of six people.