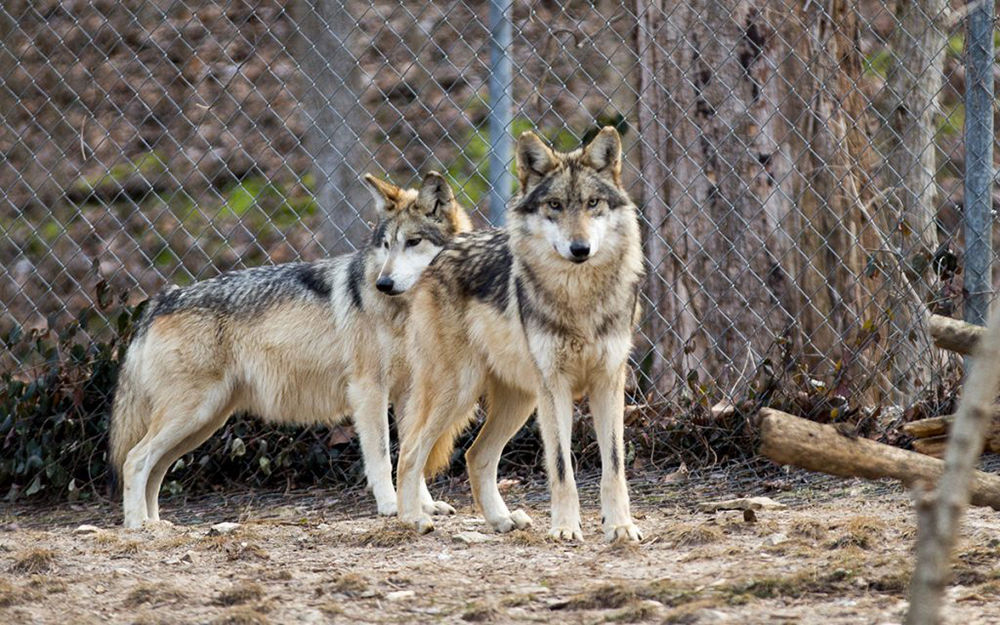 Public and private-sector agencies have spent decades and millions of dollars for research and recovery to bring the Mexican gray wolf back from the brink of extinction. And those efforts appear to be paying off. 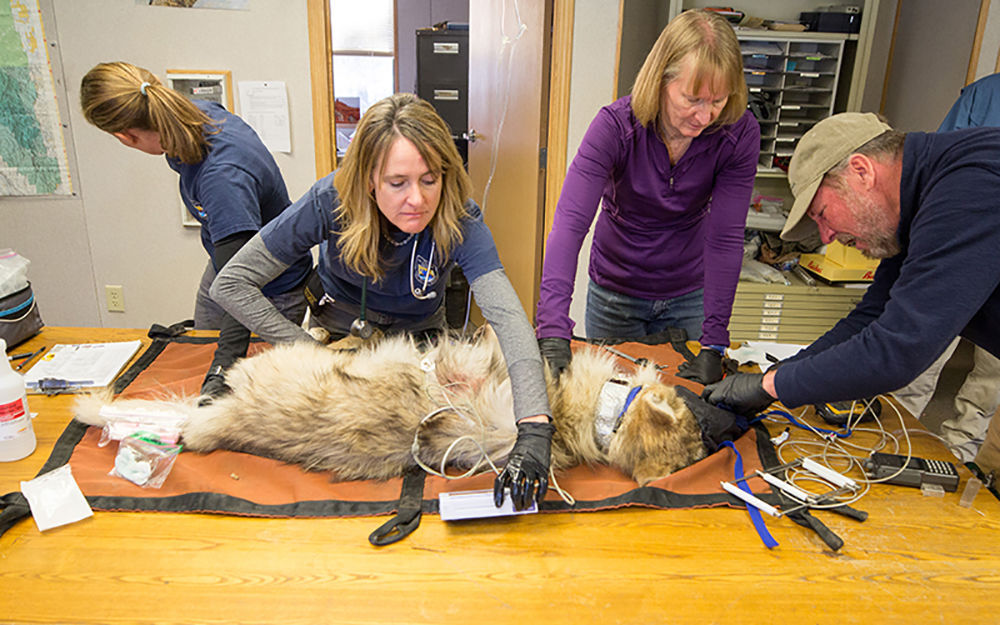 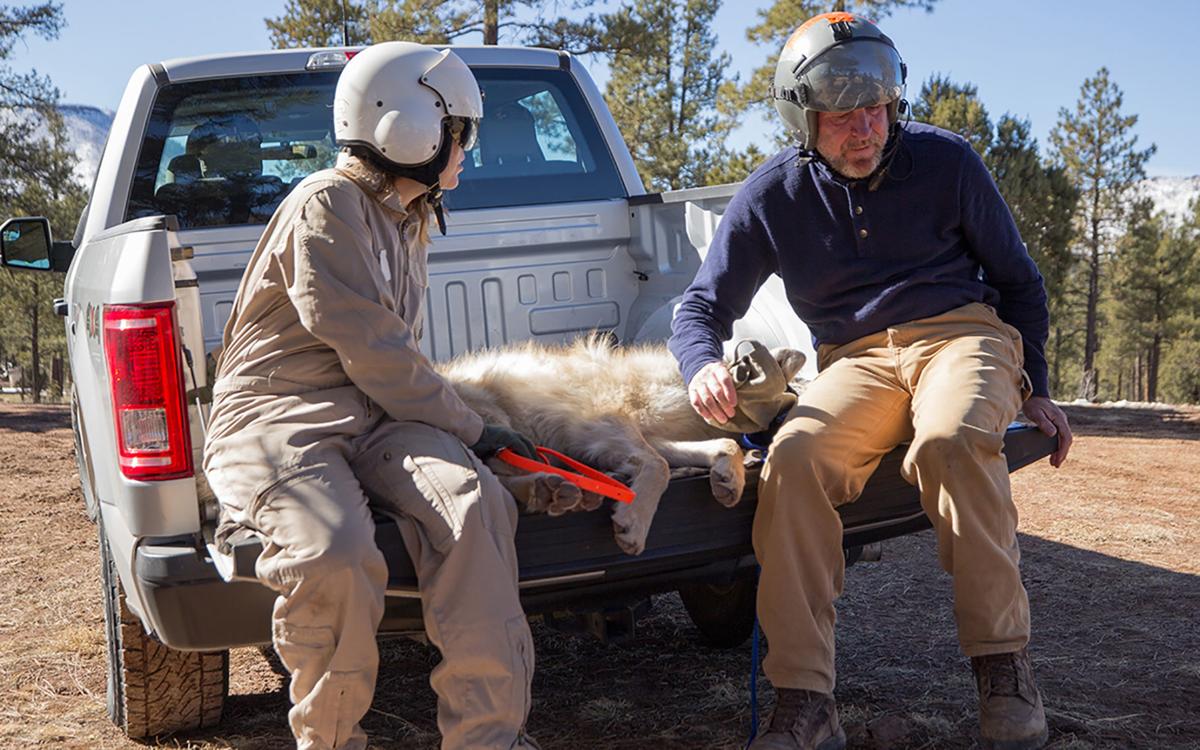 Wolf biologist Ole Alcumbrac (right) is one of the crew members that rides with mp-1858 on the way to the research trailer. 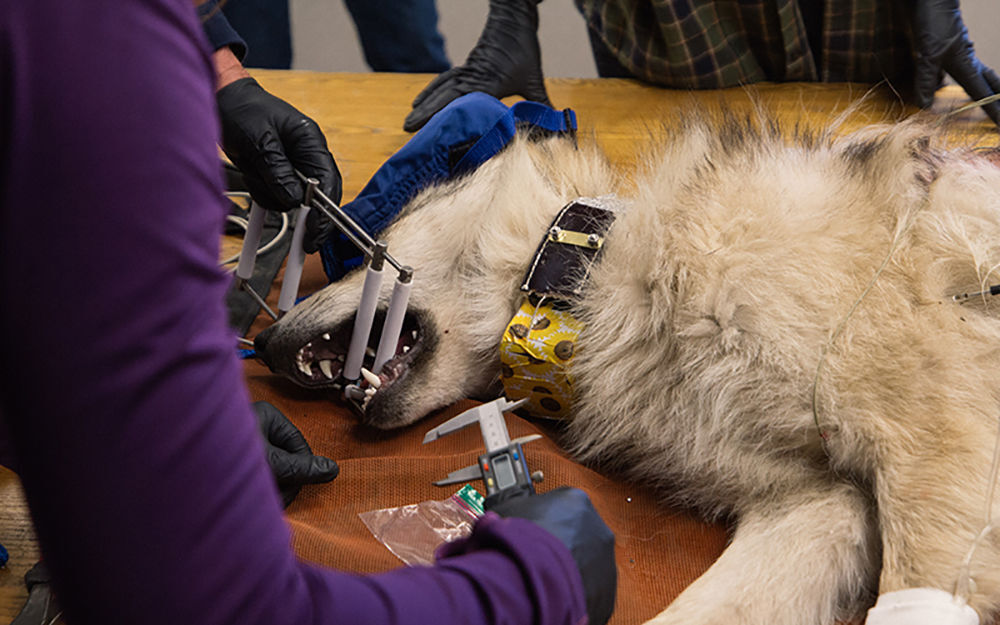 Inside the research trailer, wolf pups go through a series of examinations, including this one, which measures the size of the wolf’s mouth.

ALPINE — The day began like any other for a Mexican wolf pup living in the spectacular solitude of eastern Arizona: searching for food with other wolves in Apache National Forest.

Then came the terrifying chatter of a helicopter, a dash for cover, a jab in the rump — and a nap, courtesy of the sedative Telazol, delivered by dart gun.

After being transferred by helicopter to a remote location just outside Alpine, the 10-month-old male was rushed into a warm, compact trailer where a team of biologists quickly analyzed him.

What they discovered thrilled them. The capture in January of this wolf pup — later named mp-1858 — reaffirmed to the team that a decades-old, multistate, multiagency effort to help save the Mexican wolf population has made strides.

The biologists placed so much significance on mp-1858 because he was born in the wild, and he left his pack to tag along with a female and male Mexican wolf, possibly laying the foundation of a new pack.

The team has spent years placing newborn wolf pups in wild dens — a practice known as cross-fostering — but team members ultimately hope to see an increase in natural-born Mexican wolves, such as mp-1858, to help diversify the wolf population and raise its numbers.

“We’ve got a pretty good handle on who’s who, but the individual we caught today is a little different,” said Maggie Dwire, deputy Mexican wolf recovery coordinator for the U.S. Fish and Wildlife Service. “We’re not sure why he was running with the group of wolves that he was with. So that kind of thing is really neat, right?”

Because mp-1858 was born in the wild, he’s exactly what those striving to boost the Mexican wolf population want to see.

Government agencies, including the Arizona Game & Fish Department, and the private Endangered Wolf Center in Missouri, have invested millions of dollars and decades worth of research to save the Mexican wolf from extinction.

Those efforts included breeding and releasing adult wolves into the wild, but that program has been placed on the back burner, replaced over the past six years by the cross-fostering program. Every year, they team up to count wolves to evaluate their progress.

To researchers, mp-1858 is a wolf that could symbolize the next phase of wolf rehabilitation.

Where it all started

Center officials said he likely is the offspring of adult wolves raised and released by the center or the offspring of cross-fostered wolves born in captivity and placed in dens by biologists.

The center has led the Mexican wolf cross-fostering program that began in 2014. Founded in 1971, it sits on 63 isolated, wooded acres, designed to match the cold, silent and humanless habitat where Mexican wolves live.

Through cross-fostering, 8- to 14-day-old pups born in captivity are placed in a den of similar-aged wild pups in remote areas of the Southwest.

Mexican wolves breed in April and May, leaving a narrow window for cross-fostering. To successfully cross-foster a wolf pup, officials must identify a wild wolf that has given birth about the same time that a female wolf in captivity at the center gives birth. When happens, the clock starts ticking.

“We have to be able to find a flight, the weather has to work and we have to have enough people to do it,” Mossotti said. “So all these things, these logistics have to come together to make it happen.”

Once the team from the Endangered Wolf Center arrives in Arizona, Game & Fish employees join them on a hike to a specific wolf den, often hidden in the rugged terrain along the Arizona-New Mexico state line.

The team carefully places the captive wolf pups, fitted with tracking collars, into the wild den and leaves them to their new lives.

“To know that you’re helping release these puppies in the wild to give them that chance of freedom to help save a critically endangered species, there’s nothing better,” Mossotti said.

In 1977, the Mexican wolf population in the U.S. was down to just seven. The center initially released adult Mexican wolves directly into the wild before adopting cross-fostering. Although the direct-release program was considered a success, biologists don’t plan to resume it unless absolutely necessary.

“You are releasing naive adults, and that can take them a little bit of time to get used to the area they’re in and to establish a territory,” Mossotti explained.

Where the program is now

Nearly 1,250 miles west of the Endangered Wolf Center, the Apache National Forest in eastern Arizona is home to most of the wild Mexican wolves in the country.

In late January and early February, officials and biologists from Arizona Game & Fish in Alpine capture and examine wild Mexican wolves to gain more understanding of the population. Game & Fish monitors 31 wolf packs by helicopter and tracking collars. This allows biologists to track the growth, location and progression of current packs while noting the creation of new packs.

“Since 2009, we’ve had an average annual increase of about 12%,” said Paul Greer, Mexican wolf interagency field team leader for Game & Fish. “The population has been cyclical up and down, but overall it’s an increasing population.”

Wolf biologists also have identified successes beyond the numbers. For example, biologists are seeing improvement of survival skills in cross-fostered wolves that they did not see in adult wolves that were released from captivity.

“We’re seeing a lot more wolves that understand how to be a wolf in this landscape because they were raised by wild parents,” said Genevieve Fuller, a Game & Fish wolf biologist.

Should more be done?

Some critics of the program believe the process could be accelerated, however.

Sandy Bahr, director of the Sierra Club’s Grand Canyon Chapter, agreed cross-fostering has improved the Mexican wolf’s chances for survival, but says the introduction of captive adult wolves should resume.

Cross-fostering “can only be done on a pretty limited basis, because you have to have pups of the right age in the wild and in captivity,” Bahr said.

The Sierra Club says “release bonded packs, you know, release an alpha male and an alpha female. They’re much more likely to stay together, work together and survive versus what we’ve seen like with a lone wolf,” she said.

Emily Renn, executive director of Grand Canyon Wolf Recovery Plan, advocates for releasing adult wolves because they can add to the evolving genetic pool in a more immediate way.

“One of the things with the cross-fostered pups is it’s going to take at least two years before those wolves become adults and potentially become breeding wolves,” Renn said.

Since the cross-fostering program began six years ago, Arizona Game & Fish has had success on multiple fronts.

According to the Mexican Recovery Wolf Program, about 50% of cross-fostered pups survive to reach prime breeding age. The 2019 end-of-year census done by Game & Fish recorded the population of Mexican wolves had increased to 163 from 131. The department’s U.S. Southwest population goal is 320 wolves.

“It’ll be nice one day if we can get the genetics up to where they need to be to be able to step back and let wolves be wolves,” Dwire said.

In 2018, expenses ran about $1.5 million at the nonprofit Endangered Wolf Center, which is funded mostly through donations.

As for Game & Fish, the department puts about 7% of its budget into wildlife conservation, according to its 2018 budget breakdown.

Is it worth it?

More than 1,300 species in the U.S. are endangered or threatened and could use human help to avoid extinction. With so many plants and animals facing potential extinction, why save Mexican wolves specifically?

In fact, Mexican wolves have posed a threat to ranchers and livestock since Europeans first settled the Southwest. As the wolf population has edged up each year, so have ranchers’ anxieties.

But the Mexican wolf is classified as an “umbrella” species, Mossotti said, meaning the wolves affect a good portion of the ecosystem just by going about their business.

“When we released wolves in Yellowstone (National Park),” she said, “they had been extinct in the park for decades, and the park changed without them there. Elk population skyrocketed, deer population skyrocketed and they ate everything. They ate all the plants down to the dirt. When trees would fall, no new trees would replace them. Those trees and shrubs … provided habitat for birds and butterflies and lots of animals.”

Mossotti said the reintroduction of wolves to the park brought the elk and deer populations down to sustainable levels and allowed the plants to recover enough to provide for other animals that were suffering without them.

“To put all this energy into the wolf is ultimately to help make sure the ecosystem is healthier for everybody,” Mossotti said.

Day in the life of a small cross-section of creatures that come and go behind Daily Star reporter Henry Brean's house in Tucson. Video by Henr…

Another round of photos scanned from the archives of the Tucson Citizen and Arizona Daily Star, covering Tucson people and places from the 195…

Public and private-sector agencies have spent decades and millions of dollars for research and recovery to bring the Mexican gray wolf back from the brink of extinction. And those efforts appear to be paying off.

Wolf biologist Ole Alcumbrac (right) is one of the crew members that rides with mp-1858 on the way to the research trailer.

Inside the research trailer, wolf pups go through a series of examinations, including this one, which measures the size of the wolf’s mouth.