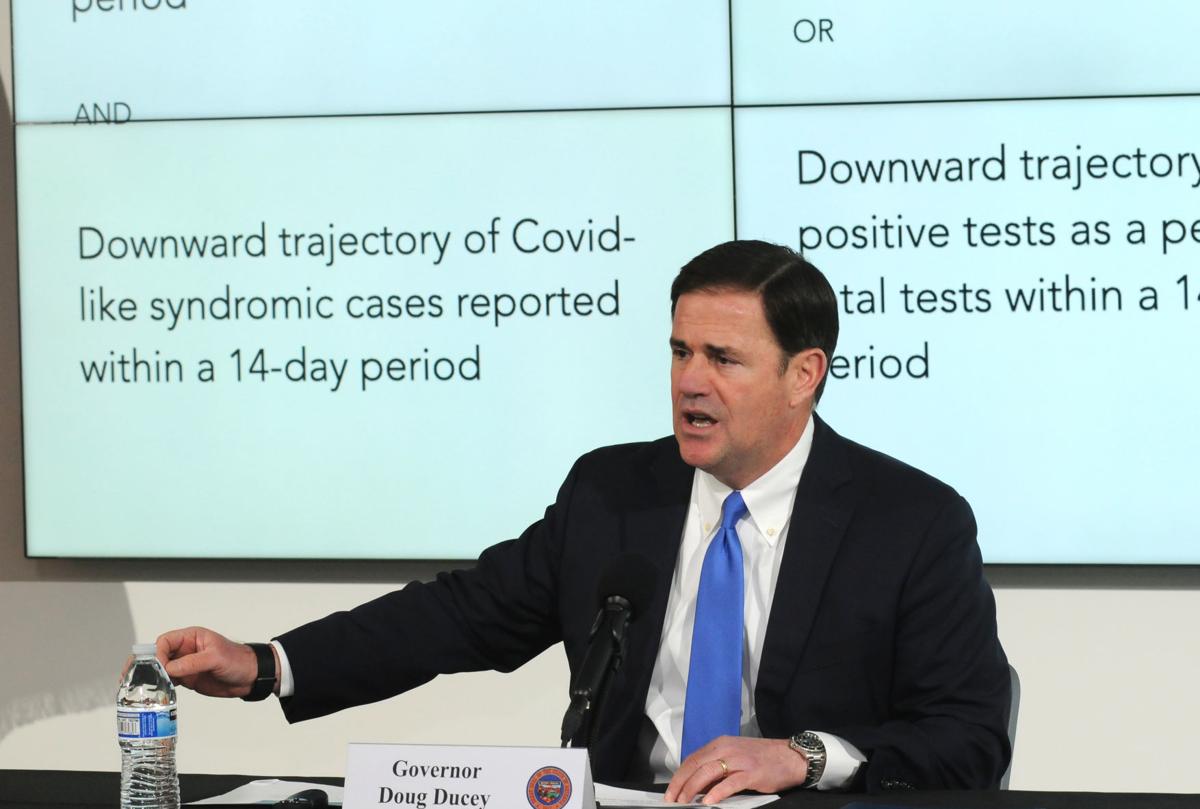 Gov. Doug Ducey discusses the issues and indicators he is reviewing to decide if he will lift some of his restrictions on individual activities and business operations that are set to expire April 30. “I’m asking for patience,” he said. 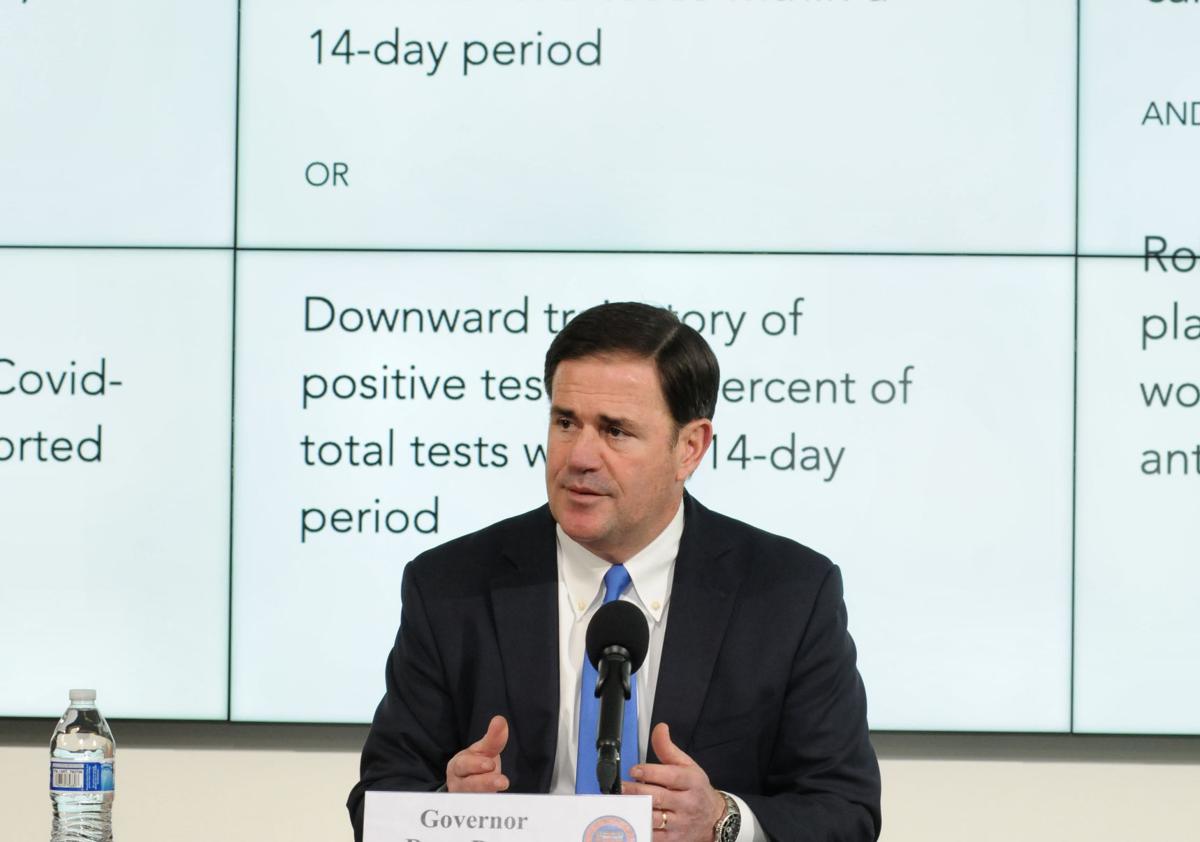 Gov. Doug Ducey discusses Wednesday the issues and indicators he is reviewing in deciding if he will lift some of his restrictions on individual activities and business operations that are set to expire April 30.

PHOENIX — Arizonans may face continued restrictions on where they can go and what they can do beyond the end of the month, as Gov. Doug Ducey said Wednesday he won’t be rushed into lifting his executive orders beyond once again allowing elective surgeries.

Ducey said elective surgeries can resume May 1. But he is not ready to decide whether his orders limiting other public activity, and closing “non-essential” businesses and services, will be allowed to expire at midnight on April 30 as scheduled, or will continue or be modified.

“As appropriate, with the protection of public health first, we’re going to be talking about how we increase the energy in our economy,” Ducey said. “I’m asking for patience.”

There has been no drop-off in the number of people getting sick and dying of COVID-19 since Ducey implemented his stay-at-home executive order on March 30. The Department of Health Services reports 229 known deaths from the virus, including 21 reported on Wednesday alone.

There were 208 new positive COVID-19 cases on Wednesday, bringing the Arizona tally so far to 5,459.

Of note, just 29% of the cases were in people with chronic medical conditions. Expanding that definition to high-risk categories — at least one chronic condition or being 65 or older — the tally was 43%.

That means 57% of those who tested positive were not considered in the “at risk” category.

Modeling available to the health department shows the state still may not have reached its peak in hospitalizations, though Ducey described that as “educated speculation.”

Ducey hinted that any restoration of personal travel and business openings is likely to be gradual.

He said he will have a “step-by-step and incremental” approach to reviewing the orders. “They will be gradual and they will be responsible as we restore confidence in our economy at the appropriate and safe time,” he said.

With elective surgeries, the original concern was there would not be enough “personal protective equipment” like gloves, masks and gowns to handle the anticipated influx of COVID-19 patients. As it turned out, Ducey said, the hospitals report they have sufficient stocks. And new figures from the health department show the state is in no danger of running out of hospital beds.

Ducey has been under pressure, in part by some business leaders and by some members of his Republican Party, to rescind his orders.

“I hear the calls that are out there from people that say, ‘Turn it back on,’ as if it were a light switch,” he said.

But Ducey said that ignores the fact that his orders were made over several weeks, each, he said, reacting to the medical evidence and news available. He said he prefers to think of it as a “dimmer switch.”

The guidance provided by the White House and the Centers for Disease Control and Prevention to governors about reopening their states say one needed guidepost is extensive testing.

But as of Wednesday, the 56,601 tests performed in Arizona represent seven-tenths of 1 percent of the number of residents in the state.

The virus — and Ducey’s reaction through his executive orders — have put a major dent in the state’s economy.

Close to 420,000 Arizonans have applied for unemployment benefits in the past week, a figure that translates to in excess of 11 percent of the total state workforce.

At the same time, the closure of bars and restaurants for all but take-out and delivery has cut sharply into tax revenues, as has the closure of other businesses that the governor designated as not being essential.

On top of that, the tourism market has virtually disappeared, along with all the dollars brought by visitors.

Legislative budget staffers, still picking through the data, put the loss in state tax dollars for the coming fiscal year at anywhere from $600 million to $1.6 billion, a big chunk out of an $11.8 billion spending plan for state government.

Ducey said his decision to shutter some businesses was very difficult.

He acknowledged that the effect may have been more severe on small businesses that were not selling items and services he considered essential. The result was that the businesses that remained open were the largest ones, with the most customers, like Walmart.

Still, he said that doesn’t mean he was wrong in drawing a line that created a disparate impact.

“I’m not going to exercise all the authority that’s given under a declaration of emergency just because it’s possible,” Ducey said.

Nearly 420,000 Arizonans have lost their jobs due to the COVID-19 pandemic

That's how many people have applied for unemployment benefits in the past five weeks.

'Cure is worse than the virus': Hundreds protest in Phoenix against pandemic closure orders

They gathered at the state Capitol Monday to protest stay-at-home and business-closure orders during the COVID-19 pandemic.

Ducey says he, not the president, will decide when to reopen Arizona's economy

Ducey also dismissed the idea of an all-mail election for Arizona.

Organization says the number of deaths per day in Arizona should be declining from this point forward.

University of Arizona to institute campus-wide antibody testing for coronavirus

Optional testing will be available to all students, faculty and staff, UA President Robert Robbins says.

In a series of tweets, the governor said he is still looking at April 30 as a time to consider allowing people to go places as well as to see what kinds of businesses can reopen.

Legislative committee says state could see a $1 billion spending deficit in 2021, nearly 800 lives lost by end of May.

The new order is a major shift from a policy of reserving the tests only for those who either had a doctor's order or specific symptoms.

Tucson shutdowns lead to drop in crimes, crashes across the community

There has been a nearly 17% drop in serious crimes between March 1 and April 16 compared to the same period last year, Tucson police say.

Arizona to give Green Valley hospital $3.6M to help it survive financial crisis brought on by pandemic

The money will most immediately be used to pay staff and suppliers, hospital official says.

Gov. Doug Ducey discusses the issues and indicators he is reviewing to decide if he will lift some of his restrictions on individual activities and business operations that are set to expire April 30. “I’m asking for patience,” he said.

Gov. Doug Ducey discusses Wednesday the issues and indicators he is reviewing in deciding if he will lift some of his restrictions on individual activities and business operations that are set to expire April 30.