In one classroom at the Ott Family YMCA, elementary-aged kids divided into groups and quietly began working on STEM kits packed in boxes, each presenting a different scenario and project to build.

Next door, a group of kids had just finished making mini glow-in-the-dark lightsabers and had broken into a dance party with the lights off, so students could show off the colors of their newest creations.

The activities taking place on July 20 at Ott, in east side Tucson, illustrated only one portion of the much bigger Az OnTrack Summer Camp, a state program that funded free summer camps across Arizona for students in pre-kindergarten to 12th grade.

Gov. Doug Ducey budgeted $100 million earlier this year of federal COVID relief money to create the statewide program, in an effort to help students overcome the academic and social losses they faced during disrupted learning caused by the pandemic.

The goal is to help kids catch up on their academics and become reengaged in learning, said Lisa Graham Keegan, a former state schools superintendent appointed by Ducey to lead Az OnTrack Summer Camp.

The state offered 800 camp sessions at roughly 680 campsites. As of last week, about 100,000, or roughly 6.2% of Arizona schoolchildren, have participated in the program, The Arizona Republic reported. Ducey had said earlier this year that the program’s budget was enough for about 250,000 students to enroll.

“When this opportunity came up, we as a statewide alliance of YMCAs decided to move forward and apply for this funding,” said Carolyn Schwartz, vice president of impact and engagement for YMCA of Southern Arizona.

“We got approved based on children learning through play and that experiential learning, and not necessarily that they’re going to sit down in a classroom-type setting,” she said of the YMCA camp models.

Several other nonprofit organizations and Tucson-area public schools also stepped up for a chance to secure some of the funding and take part in the effort.

Keegan said a total student enrollment count for camps in Pima County and elsewhere will become available once all programs wrap up at the end of the summer.

For the Ott Family YMCA, according to multisite supervisor Erica Hurt, the demand for summer camp skyrocketed as soon as Ducey announced in the spring that the YMCA would take part in the statewide effort.

Before that announcement, Hurt said, the site had about 20 students registered for its summer programs. Overnight, it reached its capacity of 90 students and had an additional 50 registered on the waitlist.

Plus, she said, the center was flooded with phone calls and emails from parents asking how they could get their kids in the program.

“It got to a point where they had to shut down the waitlist because we were not going to be able to ever serve as many kids,” Hurt said.

But thanks to the state funding and a bit of networking, Hurt said they were able to hire more staff and secure a second site to accommodate more families about a week after the Ott camp started on June 6.

She said the Ott Family YMCA partnered with Booth Fickett Math-Science Magnet School, located a couple of blocks away, to host additional students in the camps. The school allowed them to use its campus, while the YMCA was in charge of staffing.

“The downside was it was free, no cost to families, so they registered for everything, but now they’re not showing up for everything,” Hurt said of student attendance at both programs. “We had families that were waiting to get it and kids that weren’t showing up.”

So, she said, they expanded their capacity to make room for students on the waitlist. Throughout the summer, the two sites accommodated 80 to 90 kids each day.

Hurt said the two camps aren’t modeled as bootcamps for students to catch up on disrupted learning, but rather as a way to teach kids to connect with others while engaging in activities that offer STEAM-related lessons. STEM represents science, technology, engineering and math, while STEAM adds the arts to that list.

“As far as math and literacy, that’s all stuff that we’ve built into games and things that they don’t really think of as school or learning. In their eyes, they think of it as a game,” Hurt said, adding that much of the focus is on social-emotional learning, known as SEL.

Brooklyn Wood, a 9-year-old who walked around the Ott camp showing off her newly made blue lightsaber to the camp supervisors earlier this month, said making it had been her favorite activity of the camp so far.

She added that she missed lying around at home all day, but still preferred to be at camp. “We’re doing fun things and I like that,” she said.

Jaiden Carnes, a 13-year-old who has spent his past three summers at the Ott Family YMCA, said his favorite activities this year were catching up with friends, playing basketball and going on a field trip to a local trampoline park.

And, he added, he’s learned a lot of new things.

“We had to get materials and create a safe place for an egg, so it doesn’t break when you drop it. I did pretty good on that,” he said, explaining that he used cardboard, styrofoam and tape for his project.

About one week before the camp ended, Jaiden said he felt ready to tackle the coming school year at Leman Academy of Excellence.

“I feel social here, so I don’t have to be shy when I get to school,” he said. “And then I’m also ready for school because my mind is in that learning state. When I get there, I’ll already be catching on new things.”

At the end of camp, Hurt said, the students will be tested on their math and reading comprehension skills, as the Az OnTrack program has required all camps to do.

Once the Ott camp is wrapped up, site supervisor Jenny Jackson said she hopes the kids will be able to leave with improved social-emotional skills that will help them at their schools and overall in life.

She noted that she’s heard a lot of students putting themselves down, thinking that they’re “bad kids” when they make mistakes.

She said she saw a lot of improvement during the camp, and believes the students will be equipped with much better skills at the end of it.

“We do so much positive reinforcement here,” Jackson said. “I think that is really going to help the kids come out better because they see that we see the good in them.”

And moving forward, Hurt said, the YMCA plans to continue to hold this style of summer camps — focused on fun SEL- and STEAM-related activities — whether the same state funding is available or not.

Parents concerned about learning gaps during the pandemic enrolled their children in summer school in high numbers, officials say.

Though details are still being worked out, the $100 million proposal seeks to help Arizona schoolchildren catch up in math, reading and other skills.

Gov. Ducey: Major effort needed to help students who have fallen behind during pandemic

Have any questions or news tips about K-12 education in Southern Arizona? Contact reporter Genesis Lara at glara@tucson.com

Get the latest in Tucson education news.

One thing seems clear from Tuesday's court order: Full control and authority are returned to Tucson Unified School District and its elected governing board after decades of court supervision.

For Star subscribers: Some math lessons in Tucson Unified School District could be streamed onto classroom screens by teachers from a Chicago-based company because the district is struggling to find enough teachers here.

U of A survey: Teachers want training to deal with pandemic effects

TUSD middle-schoolers years behind in math, reading in 2 schools

For Star subscribers: In at least two Tucson Unified School District schools, most middle-schoolers score far below their grade levels. But students in other grades are rebounding from pandemic disruptions, district says.

Districts distribute stipends to teachers, who have been feeling the pressure of pandemic issues including staffing shortages.

Tucson-area teacher surprised with award for success during pandemic

Tucson schools struggle with staffing shortages amid spread of COVID

Some districts are scrambling to find enough substitutes to fill for absences, while other used staff or closed classrooms.

Despite the name change having the support of 25 state lawmakers and the general public, the Arizona State Board on Geographic and Historic Names decided to defer the vote since the Pima County Board of Supervisors and the Tucson City Council had not voiced their support.

For Star subscribers: Among Tucson Unified School District high schools, Catalina had the biggest increase, and Rincon the biggest decrease, in the percentage of seniors who graduated this year compared to pre-pandemic years. 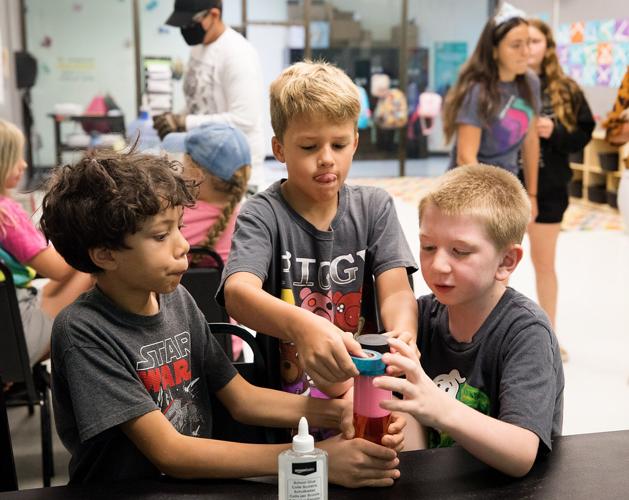 Jeremiah Morales, left, Kevin Taffner and Matthew Evorak work together to tape the top of a lightsaber they built during the AZ OnTrack summer camp at Ott Family YMCA, 401 S Prudence Road. Several YMCA locations in Tucson have been hosting Gov. Doug Ducey’s AZ OnTrack summer camps for local students to catch up on their academics. 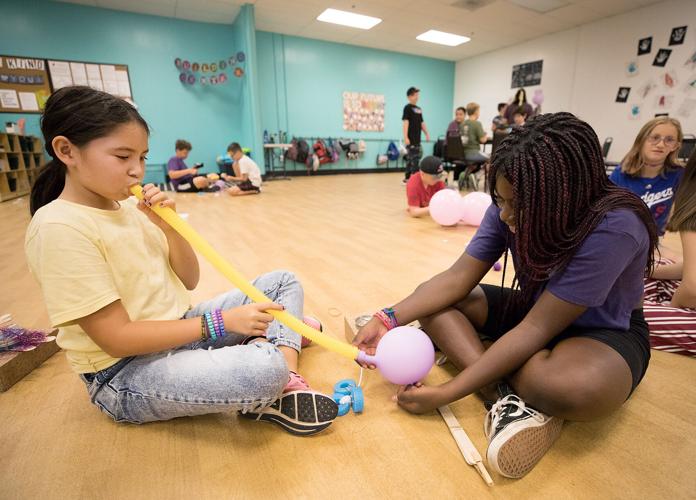 Carli DeSantis, left, and Davianna Willis work together on a STEM project during the AZ OnTrack summer camp at Ott Family YMCA. 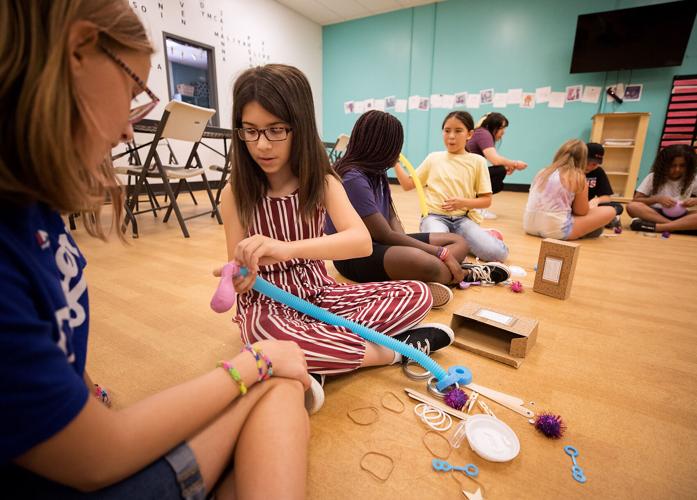 Melania Williams, right, works with Jasmine Bauer on a STEM project during the AZonTrack summer camp at Ott Family YMCA.