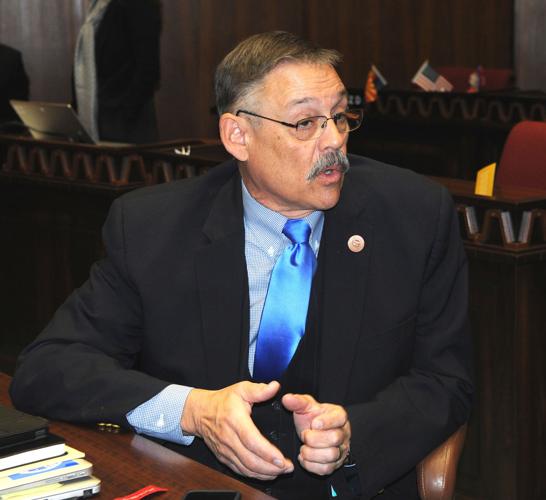 Rep. Mark Finchem has deleted his social media. He also refused to comply with a request for copies of his texts. 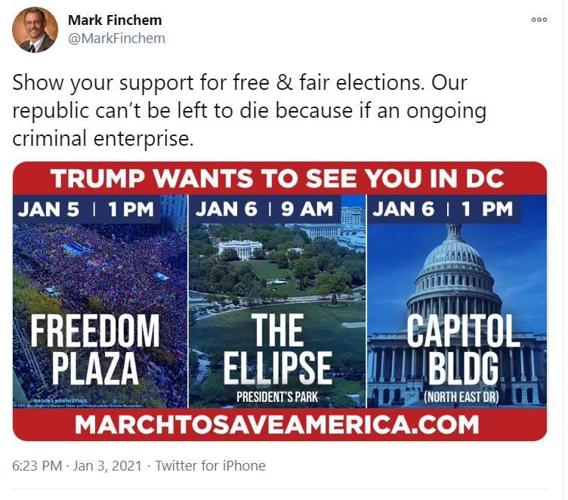 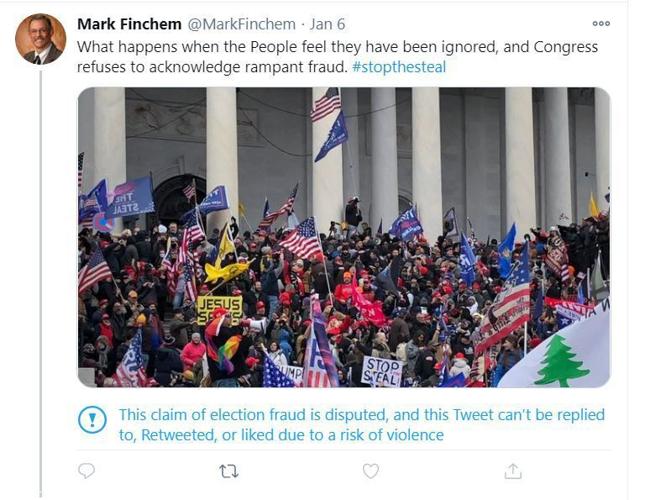 PHOENIX — The head of the House Ethics Committee is dismissing all 82 complaints against state Rep. Mark Finchem, an Oro Valley Republican.

Rep. Becky Nutt, R-Clifton, said Friday that none of the allegations against Finchem back up the contention that he “supported the violent overthrow of our government” or that he directly participated in the Jan. 6 attack on the U.S. Capitol.

Those claims were at the heart of the main complaint filed a month ago against Finchem by state Rep. César Chávez, D-Phoenix.

There is no question but that Finchem was at the rally that started in front of the White House. And Finchem posted a photo on Twitter taken once the mob had reached the Capitol.

“All the while, Rep. Finchem was there encouraging their efforts and was even scheduled to speak at the rally,” Chávez said in his complaint.

Chávez also said Finchem encouraged those who overran the Capitol that day. All that, he said, made him “unfit for office” because he “supported the violent overthrow of our government.”

But there is no evidence he entered the building. And that became a crucial point in Nutt’s decision to dismiss the case without demanding a response from Finchem and without investigating further, she said.

“Absent such facts, the complaints amount to an objection to Rep. Finchem’s advocacy of controversial political opinions,” Nutt said in her decision not to proceed.

“But the ethics committee is not — and cannot become — a forum for resolving political disagreements, no matter how important the issues at stake,” she said.

She reached the same conclusion about the 81 additional complaints received in the weeks following the initial one, saying many appeared to be form letters.

Finchem, who was furnished copies of all the complaints, declined to respond to the conclusion. House staffers said he never made a formal response, as that is not required.

Nutt’s decision to not pursue the matter drew an angry response from Chávez, who called it “beyond troublesome” that she would dismiss what he called “legitimate allegations of sedition and insurrection” and all the other complaints without an investigation or a hearing.

Chávez also said Finchem does have First Amendment rights to express his views and opinions “of which I completely uphold and would never want to disrupt.” But he said there is more than enough to call for further investigation.

One is that Finchem has deleted his social media. He also refused to comply with a public records request for copies of his text messages, with his attorney saying they’re on his personal phone and not public.

Finchem’s lawyer Alexander Kolodin also noted there is an FBI investigation into the riot. And he said even if the records were public “the threat of criminal prosecution gives rise to certain constitutional rights that may overcome the duty to disclose otherwise public documents under Arizona’s public records law.”

Chávez said there are other questions, including the Trump campaign reporting it paid a company owned by Finchem more than $6,000 for “recount: legal consulting.” Finchem said it was for “crowd control and security costs” for the Dec. 18 hearing he helped organize so that Trump attorney Rudy Giuliani could detail what he claimed was evidence of fraud in the November election.

Even with Nutt declining to pursue an inquiry, this doesn’t end the potential political problems for Finchem.

Earlier this week, a majority of House Democrats introduced a formal resolution seeking his ouster for what they said are his improper actions both before and during the Jan. 6 attack on the Capitol.

To date, however, House Speaker Rusty Bowers has not taken any action on the resolution.

That likely leaves Democrats with the lone option of making a motion to demand an immediate vote. But Democrats control just 29 seats in the 60-member chamber. So without at least two Republicans in support, that effort would fail.

So far, the House Ethics Committee Chair, Rep. Becky Nutt, has done nothing about the dozens of ethics complaints she has received against Rep. Mark Finchem for his involvement in the Jan. 6 insurrection at the U.S. Capitol.

Freshly cleared by the House Ethics chair, Arizona Rep. Mark Finchem is turning the tables on some accusers. Also new: Some of his Jan. 6 texts are released; he's asking for donations.

"The ethics committee is not an arena for waging political contests,'' the Republican committee chair wrote to Rep. Mark Finchem, R-Oro Valley.

Monday's decision mirrors one last week by the chair of the ethics committee in the House.

State Rep. Mark Finchem and U.S. Rep. Andy Biggs ask judges to dismiss claims they should be knocked off the 2022 ballot for their roles on Jan. 6.

Rep. Mark Finchem has deleted his social media. He also refused to comply with a request for copies of his texts. 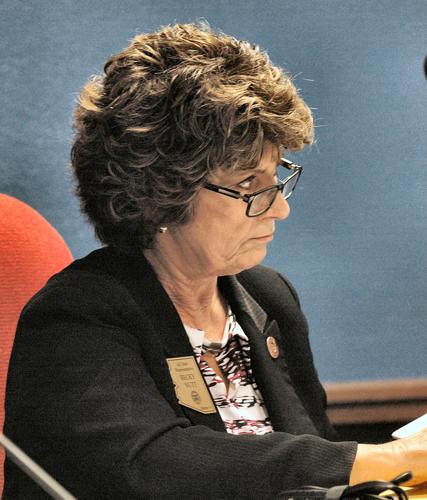