Saguaro cacti are being transplanted to make way for the border wall in Organ Pipe Cactus National Monument, sparing them from bulldozers but also raising questions about how well they will survive.

A video of a bulldozer pushing a saguaro into a pile of ripped-up desert brush caused a stir on social media last week.

That saguaro was one of relatively few that were deemed too unhealthy to survive a transplant.

Many more saguaros were replanted, as the Arizona Daily Star saw in two trips to the area last week.

Saguaros are the postcard image of the Sonoran Desert and their white blossom is the Arizona state flower.

They also can live up to 200 years and are sacred to the Tohono O’odham Nation, whose ancestral lands include Organ Pipe.

The video came as bulldozers cleared a strip of land along the border west of Lukeville, a small border town about 150 miles west of Tucson, to make way for crews to build a 30-foot wall along about 44 miles in Organ Pipe and the adjacent Cabeza Prieta National Wildlife Refuge.

The Border Patrol’s Tucson Sector did not have a tally of how many saguaros were destroyed or will be destroyed along the length of the new border wall.

Any saguaros that an arborist deems healthy enough to move will be relocated out of the construction zone, Tucson Sector spokesmen said during a media tour of the area Friday.

The Star saw a half-dozen saguaros in piles of discarded brush on Tuesday and Friday.

Far more were left standing after bulldozers cleared the area around them.

Workers with a Tucson tree company methodically wrapped each saguaro in a carpet-like cloth, tied it to a mechanical pole on a truck, moved it a few dozen feet farther away from the border, and replanted it.

Each one of the replanted cacti, which the Border Patrol said included 76 saguaros, 16 hedgehog cacti, 10 ocotillo, seven barrel cacti and one Senita cactus as of early last week, was marked with a numbered stake. The Star saw numbers as high as 141 on Friday.

Saguaros have some protections under Arizona state law. To speed up wall construction, the federal government waived dozens of laws designed to protect the environment and archaeological resources. Customs and Border Protection announced it was developing an environmental stewardship plan in early September, but that plan has not yet been published.

“It’s really disheartening to see that, to know that’s happening,” Wavalene Saunders, vice chairwoman of the Tohono O’odhan Nation, said of the destruction and relocation of saguaros on Organ Pipe.

“They are considered O’odham people just as we are,” Saunders said.

Even if the saguaros are moved a short distance, “it is like digging into someone’s heart,” she said.

Saunders said every part of the saguaro, from the ribs to the fruit that is made into wine and jam, are used by the Tohono O’odham people. Many of the rituals and traditions that involve saguaros are private and she said she was not comfortable talking about them.

Saguaros are “like our brothers that protect us and watch over us,” said Lourdes Pereira, a member of the Hia-Ced O’odham and a freshman at Arizona State University.

Pereira grew up in Ajo, north of Organ Pipe, and harvested saguaro fruit with her mother and great-grandmother.

“I remember going out to the desert with my mom and her teaching me,” Pereira said, calling it a “loving and dear time” being “one-on-one with your family” among the cacti.

She called the destruction of saguaros on Organ Pipe “very disgusting and extremely sad.”

Customs and Border Protection said in a statement that the wall construction is unfolding after coordination with the National Park Service to “avoid or minimize impacts to the greatest extent possible” on the environment and cultural resources.

“We fully understand there is a cultural, historical and natural value of saguaros,” agent Joseph Curran said during the media tour of the area Friday.

Before the cacti are replanted, their roots are dusted with sulfur, which serves as an antibiotic, according to the Army Corps of Engineers.

Arborists will check on the transplanted saguaros every two weeks for a year, Curran said.

The Tucson-based Center for Biological Diversity said that isn’t enough. “No amount of PR can change the fact that Arizona’s most iconic symbols are being bulldozed,” Laiken Jordahl, borderlands campaigner with the center, said in a written statement. “Even if some of these spectacular cactuses survive relocation, that pales in comparison to the lasting devastation this wall will inflict for generations to come.”

Curran said less illegal cross-border traffic, which the new wall is designed to stop, would mean less damage to plants in Organ Pipe.

The wall already is going up on the east side of Lukeville and crews are using the area adjacent to the border to operate cranes, dig trenches and store materials.

Wall construction has not yet started on the west side of Lukeville, where the saguaros are being transplanted, but crews were staging equipment on Friday and stacking the 30-foot bollards that will replace the post-and-rail fence in the coming months.

A looming question is whether transplanting saguaros, despite saving them from the bulldozers, would still in effect mortally wound them. The answer to that question might not become clear for at least several years.

Saguaros store water and carbohydrates, so a transplanted saguaro may flower for years before signs of its impending death appear, said Mark Fleming, curator of botany at the Arizona-Sonora Desert Museum.

If a saguaro’s full taproot is undamaged, then “there shouldn’t be a problem,” said Dick Wiedhopf, president of the Tucson Cactus and Succulent Society, a nonprofit that has rescued nearly 100,000 desert plants in the past 20 years from construction of houses and buildings in Southern Arizona. Transplanting is riskier for older saguaros that have arms, but with younger saguaros without arms that stand 10 to 15 feet tall “the chances of them surviving is pretty good,” he said.

“Everyone wants to color it bad. Let’s look at the good side. At least they’re taking them out and moving them,” Wiedhopf said. “That’s wonderful.”

Fleming agreed that transplanting a saguaro is “better than bulldozing it into a pile,” but was more pessimistic about the future of transplanted saguaros.

Even if the taproot is intact, damage to the root system as a whole during a transplant “shortens their lives tremendously,” Fleming said.

Most of a saguaro’s roots are in the top 10 or so inches of soil, Fleming said. If a bulldozer clears the area around a saguaro, that likely destroys those roots.

“Where they would have lived another 60 or 70 years, now you’re talking 10 years,” Fleming said.

A Star investigation shows the new border wall will cut a line through the path of marijuana smuggling, even as meth smuggling skyrockets where the wall can’t touch it. 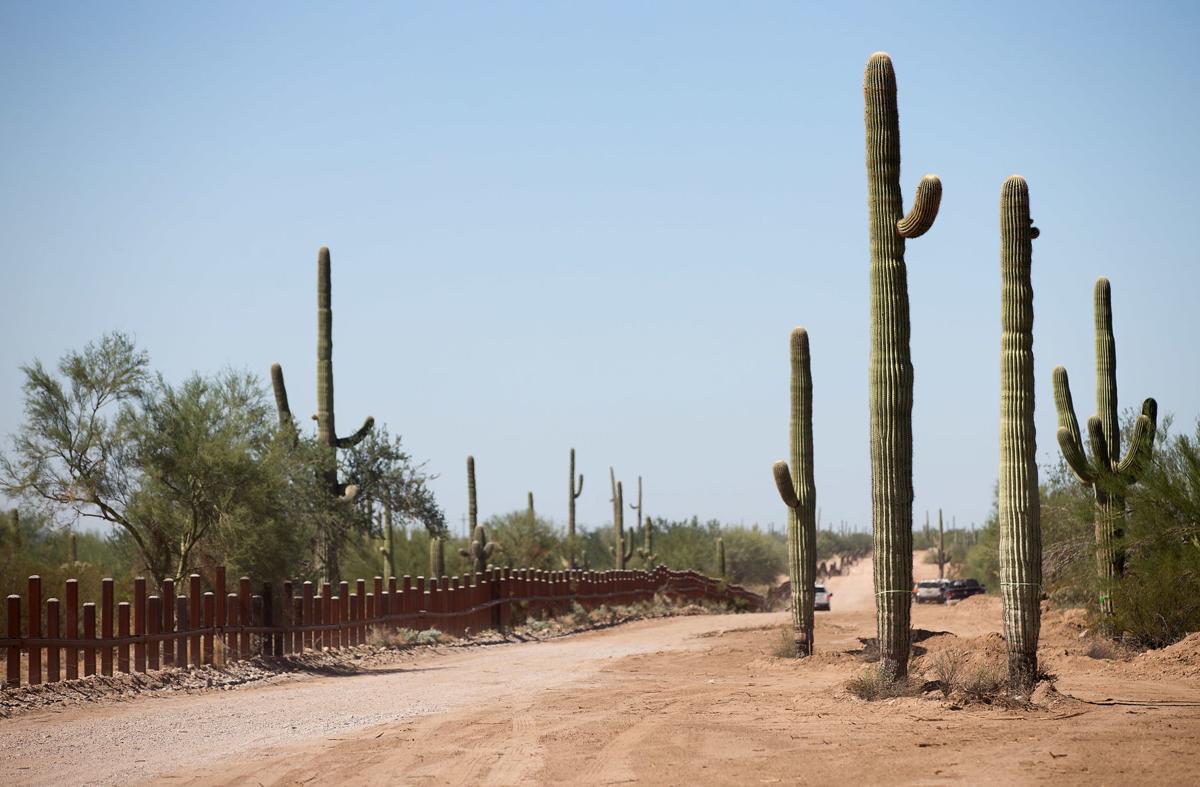 Several saguaros on the right side of the fence will be moved and replanted before construction begins on the new 30-foot border fence at the U.S.-Mexico border within Organ Pipe Cactus National Monument. 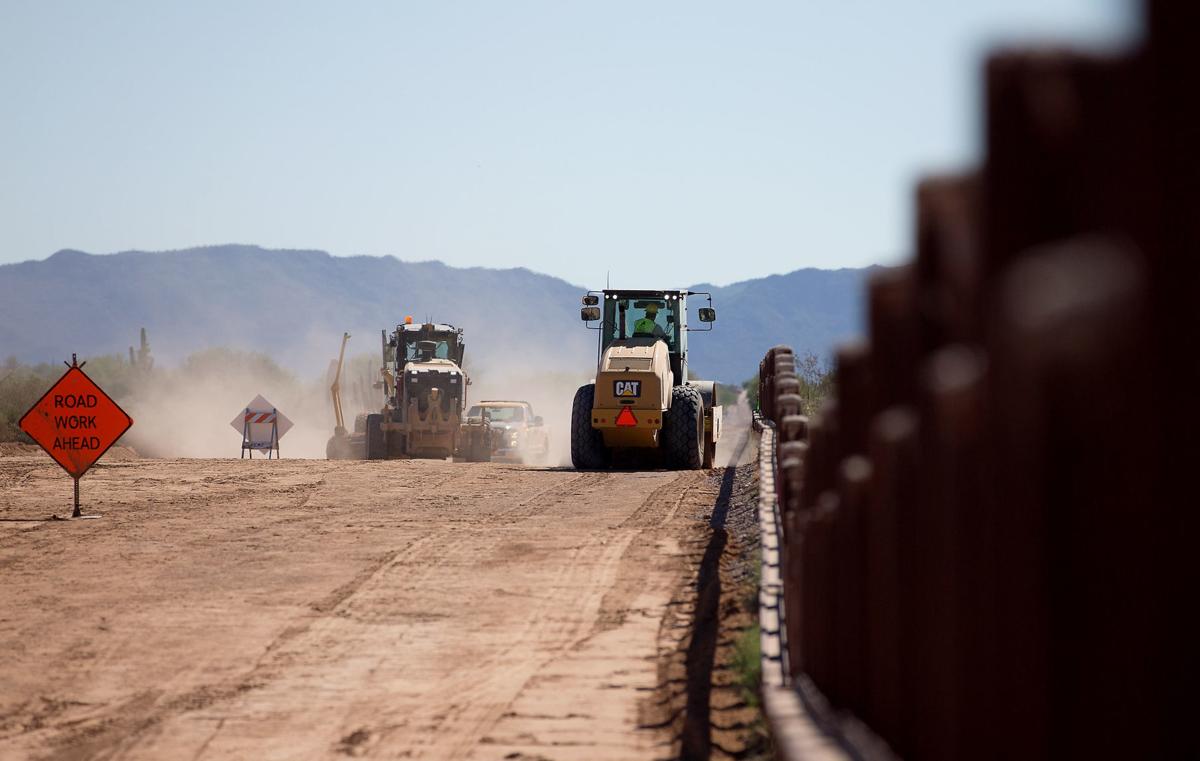 Workers on the U.S. side continue clearing an area for construction of the new 30-foot tall bollard fence that will replace the old U.S.-Mexico border fence, located 2 miles east of the Lukeville, Arizona, port of entry on Tuesday. Wall construction has not yet started on the west side of Lukeville.