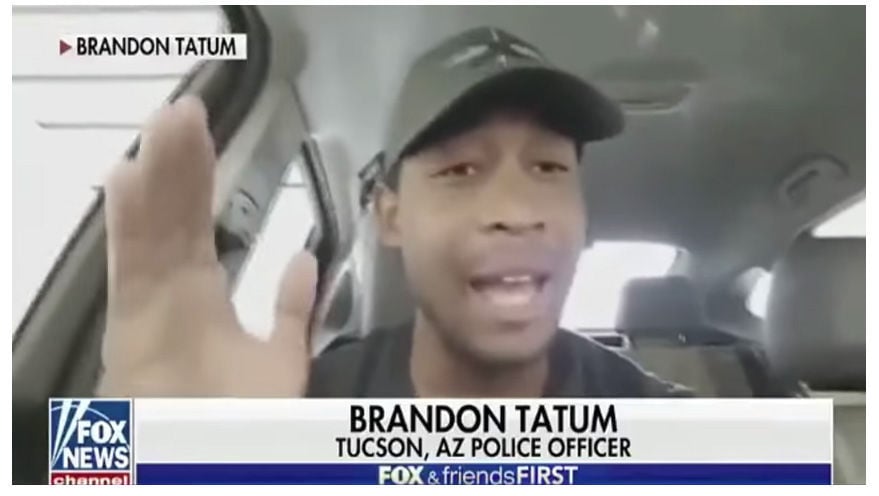 A video of Brandon Tatum appearing on Fox News.

When Brandon Tatum starts talking into his camera, you get the feeling he will burst if he doesn’t unload right then.

Tatum, a Tucson police officer, started his Sept. 25 YouTube rant this way: “Alright, we’re going to talk. Now, y’all have made me talk.”

He went on to lambaste NFL players who have protested police brutality by kneeling during the national anthem. And a segment of the country embraced him, viewing the video more than 410,000 times, making him a viral video star of the week once again.

Tatum, who for a time was a spokesman for the Tucson Police Department, first gained a wider online audience in March 2016, when Donald Trump visited Tucson for a campaign rally, and he posted a video slamming the protesters who showed up. Since then, his rants have largely been avidly pro-Trump and anti-liberal, not unlike what you’d hear on right-wing talk radio.

Videos with smashmouth names like “Kathy Griffin should be in prison” and “Shut up about Russia already!” are mixed in with some introspective, analytical pieces like “Why do I not feel oppressed like other black people?” and “Why Black Men choose White Women over Black Women.”

Tatum is careful not to suggest he is representing the Tucson Police Department when he gets on camera, but it’s been widely known since last year’s Trump rally video that he is a police officer. When Fox News did a piece on his latest viral rant, it identified him in the writing along the bottom of the screen as a “Tucson, AZ police officer.”

These are the boundaries that city policy and the police administration worry about employees crossing. The department has a 2½ page guideline in their general orders explaining how employees may use social media like YouTube in their private lives.

Among the prohibited postings: “Any act or statement, or any other form of speech that ridicules, maligns, disparages, or otherwise indicates bias against any race, religion, color, ancestry, national origin, ethnicity, disability, gender, sexual orientation, gender identity, familial status, marital status or other protected status.”

I spoke with Chief Chris Magnus and his chief of staff, Mike Silva, Thursday, and they explained it’s a complicated area of rules and laws, with plenty of gray area.

“The general rule is, in their individual capacities, members can speak on what the law calls issues of public concern,” Silva said.

But there are special worries for officers who post online and may be grilled by a criminal-defense attorney in court.

“Officers can put themselves in a bad place in terms of their own credibility in terms of providing testimony,” Silva said. “They can create their own impeachment material by going off and pontificating.”

Magnus weighs in occasionally on social media, usually about police issues and occasionally critical of President Trump or his administration. He said officers just need to work to stay within the bounds laid out by the rules.

“I certainly do not share a good many of his views,” Magnus said of Tatum, “but I have to acknowledge that he’s pretty savvy about the way he does it so as not to find himself on the other side of that line.”

On Thursday, Tatum tweeted out an invitation from Alex Jones, host of the conspiracy-mongering InfoWars show, to be interviewed by Jones. To me, accepting an interview with Jones would be crossing the line into behavior that is unacceptable from a known Tucson police officer.

Among many other conspiracies Jones has promoted is the idea that the mass shooting at Sandy Hook Elementary School in Newtown, Connecticut, was a hoax. His theories have convinced some listeners to go to Newtown and harass parents of children who died in the massacre. Earlier this year, Jones was forced to retract lies he told about refugee “rapists” working at a Chobani yogurt plant in Twin Falls, Idaho.

But even appearing on Jones’ show may be within the rules, Magnus said, as long as Tatum doesn’t present himself as a representative of the department and sticks within the rules in what he says.

U.S. Rep. Martha McSally, R-Arizona, got an unexpected campaign gift when the Center for Effective Lawmaking released its rankings of members of Congress last week. The center, a joint operation of the University of Virginia and Vanderbilt Universiy, uses a complex process to measure the substance and progress of each Congress member’s bills.

McSally ranked ninth out of the 250 members of the Republican caucus in the House, a ranking that McSally’s team said was especially impressive for her relative short period in the House.

The center ranks the majority and minority parties separately because they have such unequal abilities to pass legislation. Among the 193 Democrats. U.S. Rep. Raul Grijalva, D-Arizona, ranked 15th.

This week, the Tucson Metro Chamber of Commerce released its Tucson election endorsements, but it skipped one of the most prominent races.

The chamber decided not to endorse anyone in the Ward 6 race between Republican challenger Mariano Rodriguez and Democratic incumbent Steve Kozachik. The chamber’s Robert Medler said they interviewed the candidates but chose to take no action.

Unsurprisingly, in Ward 3, the chamber endorsed independent Gary Watson over Democrat Paul Durham. And the chamber chose to oppose Proposition 204, the initiative that would raise the city sales tax to pay for pre-school education for those in need.

SALT LAKE CITY (AP) — Top-ranking Mormon leader Robert D. Hales, who left a successful career as a businessman to help guide the church, has died from causes related to his age. He was 85.

The company recently received permission from the FAA to launch from its Tucson facility.

Road Runner: A 3-2 vote may not cut it next year for road property tax

Health care for more than 22,000 Arizona children in jeopardy

Efforts have intensified in Tucson to raise money to bail people out of immigration detention.

Senior feels he's become a much smarter player compared to his freshman season.

Man was hit by a dark-colored vehicle.

A video of Brandon Tatum appearing on Fox News.