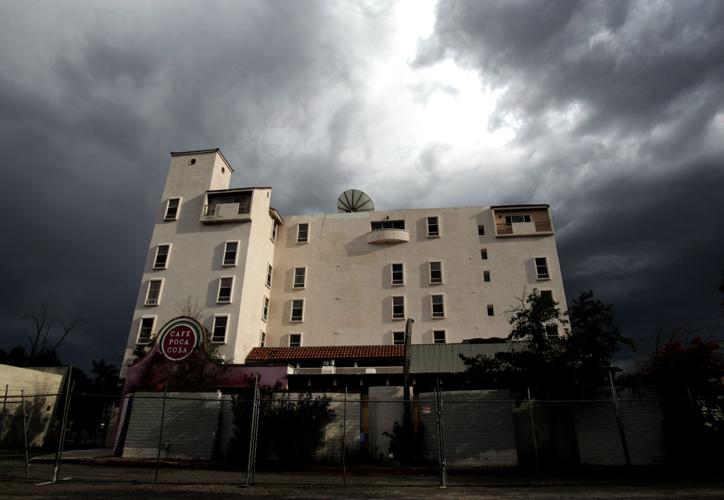 Storm clouds gather in the sky above the Santa Rita Hotel Tuesday May 19, 2009. The hotel, was rumored to be haunted. Photo by Jill Torrance / Arizona Daily Star 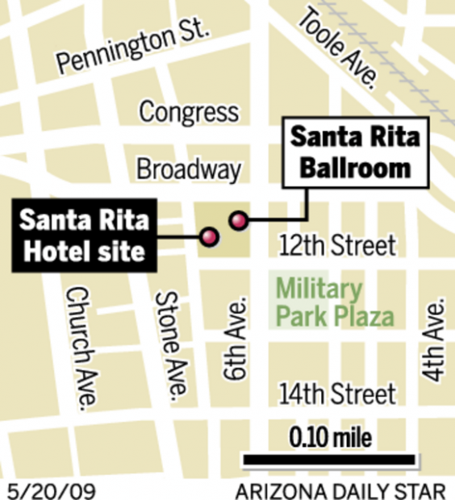 As if Downtown renewal wasn't enough of a horror story, now some say ghosts have taken over the doomed Santa Rita Hotel.

As owner Humberto Lopez prepares to sell the beleaguered, graffiti-tagged property to Tucson Electric Power, which plans to have the building demolished, the possible current spiritual tenants may be doing a little spooky protesting.

On April 12, police responded to a call from hotel security reporting potentially ghostly happenings. The guard heard footsteps coming from the fourth floor, but police searched the hotel room by room and found nothing. A week later, a guard reported that a light on the fourth floor came on, and it sounded like someone was moving around in the room. Police checked the room and adjacent floors and found no one.

The hotel, vacant since 2005, is at East Broadway and South Scott Avenue.

In recent weeks, construction workers near the hotel say they've heard stories of rocks skipping down the hallways and doors slamming shut. And a Star reporter walked by the building Monday night and heard a creepy belly laugh emitting from the building. He hopped a fence and spoke to a security guard, who said the noise didn't come from the hotel.

So if the cops can't do anything to bust these ghosts, who you gonna call?

Hotel staffers have already tried hiring a medium, and that didn't calm things down.

Parapsychologist Amy Allan, who now lives in Denver, used to own a ghost-hunting operation called Lost Souls Paranormal Investigations in Tucson and studied the Santa Rita from 1998 to 2006 at the behest of jittery staffers who called her in. She said the Santa Rita is as haunted as San Diego's Whaley House, which the Travel Channel's "America's Most Haunted" rated as the most haunted house in America.

Allan said hotel staff members called her to investigate because they were terrified of ghosts who were harassing them.

"The owner really wanted us to keep it on the down-low," Allan said, adding she did the work pro bono. She said a lot of the ghosts told her they were being kept there by a sinister, powerful spirit Allan believes was an American Indian who is buried underneath the property. Allan said the entity draws on the fears and anger of others.

"He moves objects, he throws things around the room, he opens and closes doors," Allan said. "He's not evil, just upset, and kind of rightfully so." Imagining things

Lopez, who adamantly denies any spiritual presence inside the hallways, disagrees with Allan and said he had no problem with her study. He's owned the building since 1979 and used to live there. He said he couldn't recall any guests or employees complaining to him that the building was haunted.

"I think what it is, is you hear stories and your mind plays tricks on you. They say they hear doors slamming. Well, the windows are open because we're trying to air it out," Cousins said. "Most of the things that have been said, I've been able to debunk."

Cousins forbade his security guards from talking to the Star.

Roy Harguess, an electrical foreman who was working Monday near the hotel on a Scott Avenue paving, streetscape and waterline project Downtown, said he's heard stories about ghosts at the hotel but doesn't believe them.

"People I've talked to said they've seen rocks flying across the hallway," Harguess said Monday as he wiped the sweat from his brow. "Personally I don't believe in it. If you're there in the middle of the night, you might imagine things."

If the hotel is indeed haunted, you'd think Juan Ayala would know. One of the owners of Ayala Contractors, Ayala — who worked maintenance at the hotel when he was a teenager in 1983 and 1984 — has been digging out the innards of the hotel's adjacent ballroom.

Not exactly a way to get on a bitter ghost's good side.

The foreman of a five-man crew, Ayala said neither he nor his workers have been spooked, although he's had passers-by tell him that the hotel is haunted. Swarming with spirits

Teresa Ortiz, owner of Lost Souls Ghost Tour of Downtown Tucson, which stops by the Santa Rita every Saturday and hits other paranormal hot spots, including the Fox Tucson Theatre and Hotel Congress, isn't surprised by the reports because she says she's met the ghost she believes is responsible for some of the mischief.

His name is Ferguson, he hangs out in Room 822 and he's partial to turning the lights on.

Ortiz said sometimes you can see Ferguson's silhouette from the street at night.

"He's very tall and slim, with white hair that's short, almost balding, and big teeth," Ortiz said. "He just likes to sit there and hang out."

Ortiz, who said the Santa Rita is one of Tucson's most supernaturally active hotels, conducted a paranormal investigation of the hotel before it closed in 2005. She said Ferguson — who was not necessarily a Tucson resident — was part of a torrid 1920s love triangle.

Ferguson was married to a younger woman who started an affair with his business partner.

When Ferguson discovered his wife was pregnant with the other man's baby, Ortiz said, he killed them both.

He then hanged himself in a hotel elevator shaft.

Allan said it's natural — well, supernatural — for ghosts to be able to turn lights on.

"When we think about deceased people, what they consist of is energy," Allan said. "If they're able, if they have enough power — which let me tell you, that place does — they can affect light sources or anything with energy or that creates electricity. I'm not surprised (about the lights)."

The mischievous Ferguson and the malevolent, controlling spirit aren't the only ghosts haunting the Santa Rita, according to Ortiz.

"There's a little boy at the swimming pool and his footprints show up around the pool. When the hotel was open, people would say there were kids talking in the hallway on the third floor and would send for the security guard, but they wouldn't find any kids there."

Allan said if TEP moves into the space, the company can expect its new offices to be as haunted as the Santa Rita was. TEP spokesman Joe Salkowski declined to comment on the prospect of buying a haunted building.

"That'll be interesting," Allan said with a chuckle. "I don't think it should be torn down because it could contribute to a lot of studies and frankly, I don't think anyone should be there."

The owner of a chain of clothing stores in Tucson and Phoenix, BBB Fashion, kept cash paid by customers, which was not reported to accountants for several years.

For Star subscribers: As distribution and warehouse operations expand in the Tucson area, investors purchased 129 acres for a logistics center for $22 million.

For Star subscribers: After being on the market for several months, this Tucson-area home sold for a record-breaking amount: $6.9 million. Take a look inside.

System made by Tucson's Paragon Space tested on Starliner

For Star subscribers: The U.S. Supreme Court overturned  federal court decisions to allow two inmates, including one who killed a 4-year-old Tucson girl, to present new evidence that their trial attorneys were ineffective.

Watch Now: Netflix and movie theaters might be teaming up

Watch Now: Netflix and movie theaters might be teaming up

Storm clouds gather in the sky above the Santa Rita Hotel Tuesday May 19, 2009. The hotel, was rumored to be haunted. Photo by Jill Torrance / Arizona Daily Star