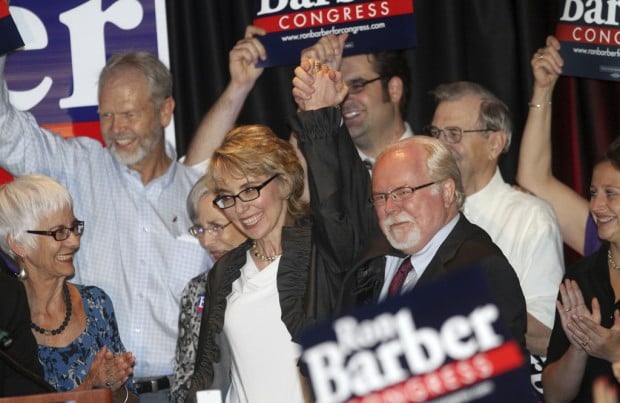 Former U.S. Rep. Gabrielle Giffords joins hands with Ron Barber, the man who will assume the congressional seat she vacated. Barber defeated Jesse Kelly in the Congressional District 8 race. Barber's wife, Nancy, left, was among those gathered at the University Marriott on Tuesday night. 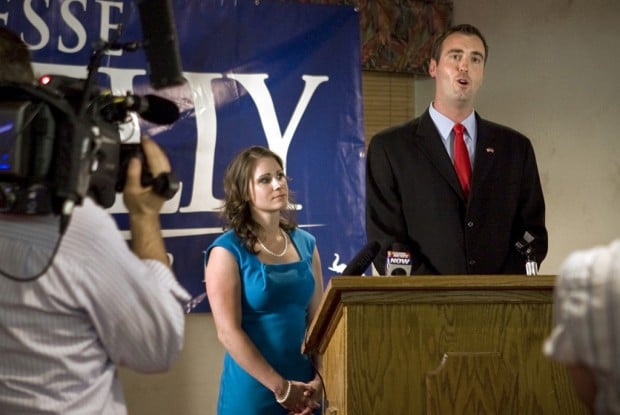 Jesse Kelly speaks to supporters gathered at the Viscount Suites, where he acknowledged his electoral loss. It was his second bid for the Congressional District 8 seat. His wife, Aubrey, was behind him during his concession speech Tuesday night. 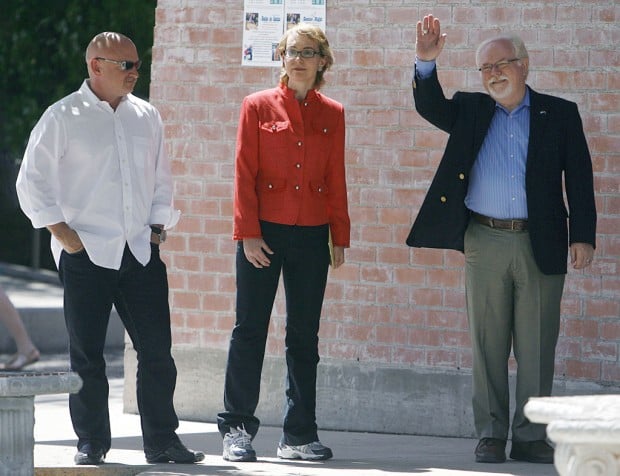 Barber rode a 9-point lead in the 147,000 early votes cast - which accounted for 75 percent of the votes counted as of Tuesday night - to victory in this nationally watched race in which more than $2.2 million was spent by outside political groups on TV ads and mailers.

The win completes Barber's transition from a career as a behind-the-scenes bureaucrat to a U.S. congressman.

Two years ago Kelly lost to Giffords by a mere 4,000 votes. Barber more than tripled that advantage, holding a lead of more than 13,500 votes with just a small number of Pima County votes left to be counted.

Although the vote tabulation is incomplete, Kelly actually appears to have won among voters who went to the polls on election day by a few hundred votes - but not nearly enough to overcome Barber's early-voter advantage.

"A year ago I never dreamt that I'd be standing here, thanking you for your support," said Barber. Giffords and her husband, Mark Kelly, stood by his side during his victory speech.

"But, as you know, life takes unexpected turns," Barber said.

He was, of course, referring to the January 2011 mass shootings in Tucson, in which six people were killed and 13 wounded, including Giffords and Barber. Barber was shot twice and suffered nerve damage in his left leg.

Giffords' resignation in January, to focus on her recovery from being shot in the head, set this special election in motion.

Barber thanked Giffords for her service, told her she is an inspiration to all and promised to continue her legacy in Congress.

"This was never Gabby's seat. It's not my seat. It's your seat. This seat belongs to the people of Southern Arizona," Barber said. "I promise I will work every bit as hard as Mo Udall, Jim Kolbe and Gabrielle Giffords to honor that trust."

The victory gives Barber strong momentum heading into November election's in the newly drawn Congressional District 2, which covers much of the same turf but has a much more favorable electorate for Democrats.

Kelly's loss - his second in two consecutive attempts to win the CD8 seat - puts his political future in question. He'll face a primary challenge now in CD2 from Republican Martha McSally, who would have withdrawn had he won this election. And fundraising could now be difficult because of the stigma of being a two-time general-election loser.

After calling Barber to congratulate him, Kelly spoke briefly to supporters Tuesday night. Kelly said "only God knows" what his future holds. He said he will "most likely" run in CD2 in August, but said wouldn't make an official announcement until today or later.

"We are blessed by God to live in a country where voters get exactly what they want," Kelly said. "So they have spoken here and we respect that."

Barber, 66, a former district director for Giffords, sold himself as the best candidate based on his deep roots in and in-depth knowledge of the district. Prior to serving 5 1/2 years as Giffords' district director, he worked 32 years at the Arizona Division of Developmental Disabilities, including as the state director.

Barber's campaign focused on fighting for the middle class and protecting Social Security and Medicare. He also pledged to work to find bipartisan solutions to complex problems.

Republican critics bashed Barber as a candidate who would be nothing more than a "rubber stamp" for failed policies of President Obama, House Minority Leader Nancy Pelosi and other Democrats. The National Republican Congressional Committee spent $1 million to drive home that message.

"I say, and we say, no to extreme politics," Barber said after Tuesday's vote. "We say yes to working across party lines to secure a strong future for Arizona. We say yes to common ground, to common sense and to common decency."

Kelly, 30, a project manager at family-owned Don Kelly Construction, ran on a conservative platform guided by the root belief that less government is always better.

Presenting himself as calmer and more mature than during his 2010 run, the Marine Corps veteran stayed close to a platform of lower taxes, a better economy and more jobs. He also proposed cultivating more American energy as a solution to everything from gas prices to shoring up Social Security and Medicare.

Democrats hammered Kelly all campaign over his 2010 comments about wanting to privatize and phase out Social Security and Medicare, and questioned if a man with no college degree and less than 10 years in Arizona was qualified to represent the district in Congress.

During a three-minute concession speech, Kelly thanked his family, Jesus and campaign volunteers for their efforts.

"I have had the privilege to fight with some really, really great Marines in my time. What you've been willing to do for your country ... every single one of them would respect you," Kelly said. "It's been an honor to go out there with you, to make the calls with you, to run the race with you."

With early votes in the CD2 primary going out in less than two months, Barber won't have the luxury of focusing on just being a congressman. He's set to face Tucson doctor and state Rep. Matt Heinz in the Democratic primary on Aug. 28.

If Barber can outlast Heinz, he would face the winner of the GOP primary, which will feature Kelly, McSally and Mark Koskiniemi, a political newcomer who works in the Pima County procurement department.

Not only would Barber be the incumbent in the Nov. 6 election, but he'll be competing in a more favorable district in terms of registered voters because the Republican advantage in the current CD8 erodes in the new CD2.

Barber said Tuesday that voters will be able to judge whether he's worthy of re-election in November based on how he does during his short stint in Congress.

"The job I do for this community will be the way the people in the community determine if I'm elected a second time," Barber said.

"Congressman-elect Barber ... follows in the footsteps of our extraordinary colleague, Congresswoman Gabby Giffords - and he has enormous shoe…

With an estimated 5,000 late- arriving early ballots still to be counted, Ron Barber has an insurmountable lead in the Congressional District …

What others are saying about Arizona's special election

Reaction to the results as the votes are counted in the race to replace Gabrielle Giffords in Southern Arizona's Congressional District 8.

Former U.S. Rep. Gabrielle Giffords joins hands with Ron Barber, the man who will assume the congressional seat she vacated. Barber defeated Jesse Kelly in the Congressional District 8 race. Barber's wife, Nancy, left, was among those gathered at the University Marriott on Tuesday night.

Jesse Kelly speaks to supporters gathered at the Viscount Suites, where he acknowledged his electoral loss. It was his second bid for the Congressional District 8 seat. His wife, Aubrey, was behind him during his concession speech Tuesday night.