The number of new COVID-19 cases in Arizona recently declined from one week to the next.

“The evidence now is compelling that we’ve seen a reversal in trends and things are definitely improving in Arizona,” said Dr. Joe Gerald, an associate professor with the University of Arizona’s Zuckerman College of Public Health. “We could quibble a little bit about how fast, but I think it’s clear that things are getting better.”

A simultaneous decline in statewide tests could partially explain this week-to-week decrease in new cases.

Nevertheless, the decline in cases was steeper than the decline in tests. This, along with several other metrics, suggests that the spread of COVID-19 has recently slowed in Arizona.

New confirmed cases statewide totaled 23,493 from July 5 to July 11, according to data published by the Arizona Department of Health Services on Friday. This was a decrease of 4,042 cases, or nearly 15%, from the week of June 28 to July 4.

Diagnostic tests also decreased statewide, but by 9%, over the same time frame.

New cases in Pima County totaled 1,893 from July 5 to July 11. This was a decrease of 451 cases, or 19%, compared with the previous week. The number of countywide diagnostic tests remained relatively flat, with a decrease of only about 1%, over the same time.

“So the bottom line for me is that I believe that we are either cresting or near the top of the crest of this,” said Dr. Francisco Garcia, Pima County’s chief medical officer.

“The last thing I want people to take away from this is that the war is over because clearly it is not,” he said.

The steps taken in Arizona to curb the spread of coronavirus, like implementing local mask-wearing requirements, are working, Gerald said. But we don’t know how long the improvement in conditions will last.

“This is putting us in very new territory here,” he said. “We’ve yet to see sustained improvement in Arizona and I’d hate to count my chickens before they hatch.” 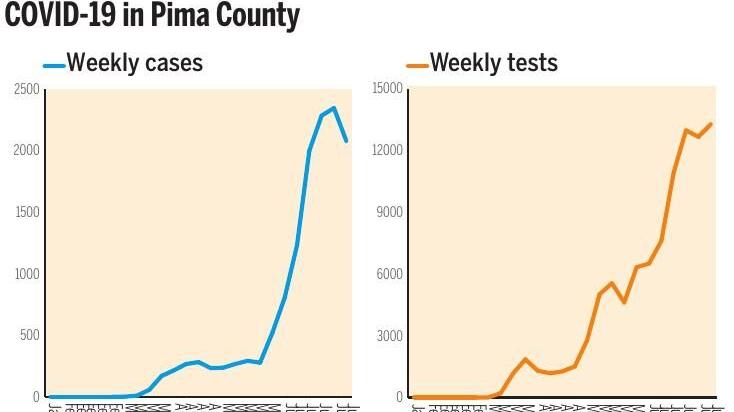 While the spread of COVID-19 might have slowed in recent weeks, measurements from a different benchmark show how widely the virus has spread since Gov. Doug Ducey let his stay-home order expire on May 16.

Typically, it takes about four to seven days for the ADHS to publish new cases, according to the department’s website. Recently, however, it’s taken longer.

This delay is due to data-reporting lags across the health-care system at places like laboratories that report test results to the state. And these lags are often caused by delays in processing coronavirus test results.

A week ago, for example, the total number of new cases in Arizona from July 5 to July 11 looked like it had decreased by 42% from the week ending July 4, but 7,843 cases were backfilled over the last week, as of Friday. These backfilled cases showed the smaller, week-to-week statewide decrease of nearly 15%.

If this 15% decrease isn’t considerably changed by backfilled cases, it will be the first substantial decrease in week-to-week cases since the pandemic began, according to ADHS data as of Friday. The number of new statewide cases declined one other time by 69 cases from the week ending May 16 to the week ending May 23.

“Over the last couple weeks you see the beginnings of a trend headed in the right direction,” Ducey said on Thursday. “We need to continue that.”

Among the diagnostic tests conducted between July 12 to July 18 that have been reported, the percentage that came back positive declined for the second consecutive week, according to the data published by ADHS on Friday. Statewide, about 15% of these tests came back positive, down 4 percentage points from the week before.

The same is true for Pima County. About 11% of diagnostic tests came back positive, down 2 percentage points from the week before.

The percentage of positive tests in Pima County is slowly trending down, Garcia said. “This trend is going in the right direction. This is the scorecard that I track.”

Garcia wants to see the percentage of positive tests decline to below 5% in Pima County, but he doesn’t see it happening immediately.

On Thursday, Ducey pointed out that the number of patients with COVID-like illnesses in emergency rooms has shown a recent downward trend, along with the number of beds used by coronavirus patients in intensive care units across the state.

As of Thursday, 85% of beds in adult intensive care units were in use in Arizona, according to the data published by the ADHS on Friday.

The number of statewide week-to-week deaths is still rising as a result of the surge in cases in June, when accounting for a two-week data-reporting lag. However, they are not rising as fast. The increase from the first week of July to the second week of July was smaller than the week before.

“We are seeing the first signs that fatality rates are starting to moderate, and hopefully they will decline,” Gerald said.

In Pima County, week-to-week deaths recently decreased, according to data Garcia showed the Arizona Daily Star on Friday. Despite this decrease, however, these two weeks hold the record for the most weekly coronavirus deaths in the county.

From June 28 to July 4, 50 people died from coronavirus in Pima County. Then 41 people died from July 5 to July 11, but Garcia said this total may still be adjusted up by one or two deaths.

“Case counts are down, hospitalizations down, and we would expect deaths to eventually follow that trend,” Gerald said. “And we’re starting to see early signs of improvement.”

Arizona recently saw novel coronavirus cases plateau from one week to the next.

Pima County officials are frustrated by calls they’re getting about certain businesses not following the rules laid out in the mask-wearing ordinance, said chief medical officer Dr. Francisco Garcia.

“For the last two weeks, the reporting lag has grown longer and it just makes it more difficult to understand what's going on because the data aren't available soon enough. So I don't think we know where we are right now; testing has gotten so bad again in Arizona,” University of Arizona expert warns.

"We should be very concerned," says Dr. Francisco Garcia, Pima County’s chief medical officer. But the county's new mask-wearing requirements, covering all residents including in Tucson, might change the trajectory of the coronavirus outbreak, experts say.

Arizona Gov. Doug Ducey says the state isn't in a position to boost its $240 weekly unemployment payments; pushes for Congress to act with additional pandemic relief.

In Pima County, the number of cases has started to show a decline, while the percentage of positive cases has also declined.