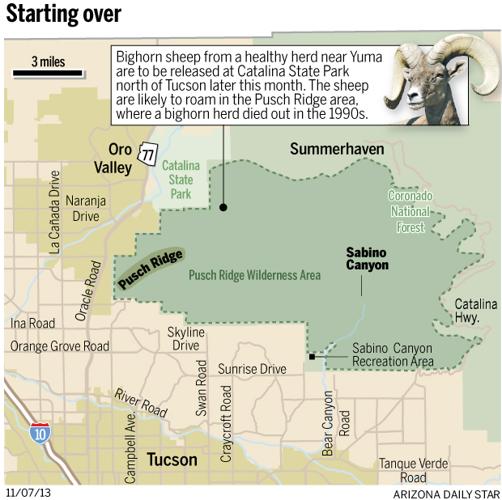 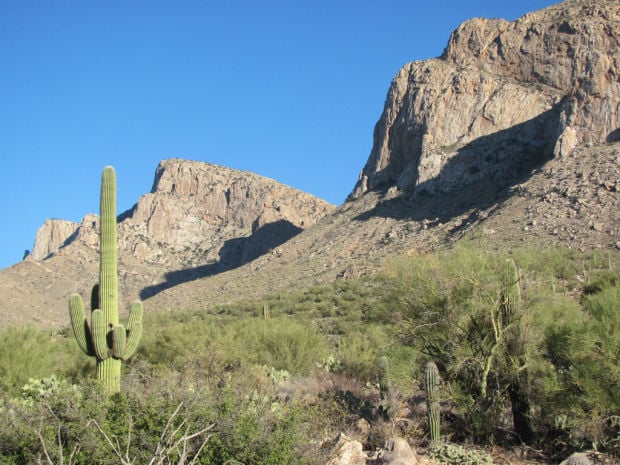 Pusch Ridge on the western end of the Catalina Mountains will be home to reintroduced bighorn sheep later this month. About 30 animals will be relocated from habitat near Yuma. 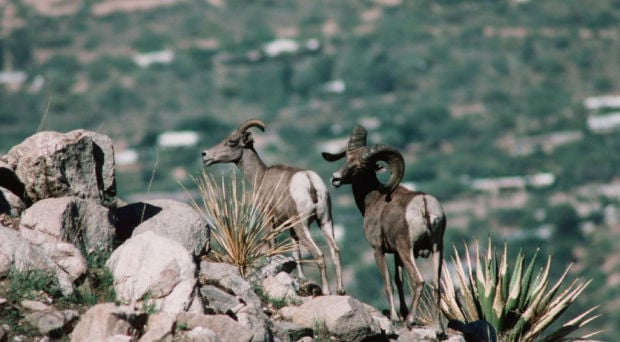 These bighorns were among the last living in the Pusch Ridge area in 1992. ﻿

Drive north of Tucson into Oro Valley, pull over, and peer up at rugged Pusch Ridge towering above you to the east: What you’re seeing is the past and future home of a free-roaming herd of bighorn sheep.

Plans call for reintroducing bighorns later this month on the ridge in the Catalina Mountains — where a herd of the agile, but in some ways fragile, animals died out in the late 1990s.

State wildlife officials say the ridge habitat is much improved in recent years, and they predict sheep brought to the site from Western Arizona will thrive there.

“You look up at that ridge and you think: There should be sheep there,” said John McGehee, a wildlife manager for the Arizona Game and Fish Department. The department plans to capture about 30 bighorns northeast of Yuma beginning Nov. 16 and release them onto the ridge from Catalina State Park.

“I think they’re going to do fine up there because the habitat is so much better than it was” when the previous herd died out, McGehee said. “But wild animals have a mind of their own. Will they become accustomed to the habitat? We’ll have to see.”

Pusch Ridge, by many measures, is an ideal range for bighorns — which are big, up to 250 pounds or more for males, and handsomely horned in adulthood.

The most striking feature of the ridge area: steepness.

Tucson resident Bob Cardell, an avid hiker who has summited those peaks and roamed the area’s canyons, can attest firsthand to the nature of the terrain.

Vegetation ranges from saguaros and other cacti to junipers and oaks in higher elevations of the Pusch Ridge Wilderness. Forage for bighorns includes jojoba, brittlebush, rock moss, fairyduster and grasses.

Bighorns can often get by with the moisture they obtain from plants, but water sources include springs, rainwater pools in canyon bottoms and a catchment near the base of the ridge.

“We don’t expect they’ll have problems with water, and there’s no grazing up there” of livestock, which could compete for water supplies, McGehee said.

It adds up as ideal terrain for the sheep, which are excellent climbers with a keen sense of balance, remarkable speed in steep country, and an adaptability to assorted food sources. Bighorns were abundant in the area during much of the past century, with population estimates ranging from 100 to 220.

But if the ridge seems an ideal home for bighorns, it’s also a potentially dangerous place for them — a fact dramatically demonstrated by the previous herd’s sharp decline in the 1980s and eventual disappearance in the 1990s.

Suspected causes of the herd’s demise include urban development, predation by mountain lions, human impacts from hiking and bringing dogs into the area, disease, and changes in habitat conditions.

A flourishing mountain lion population will pose a threat to the reintroduced sheep. So will an ever-expanding human presence, which can interfere with bighorn travel routes, feeding, breeding and other activities.

But it’s the improved ridge habitat, biologists maintain, that could turn the tide in the bighorns’ favor.

FIRE TO THE RESCUE

Wildfires at various sites in the sprawling 56,933-acre Pusch Ridge Wilderness Area, which extends well east of the ridge itself, have vastly improved the habitat for sheep, biologists maintain.

“Fires opened up the understory” of vegetation, McGehee said. “When it does that, it makes the forage more palatable. It also gives the bighorns better visibility of predators” and an improved chance of eluding them.

A document called the “Habitat Enhancement and Wildlife Management Proposal,” prepared by the Game and Fish Department, outlines plans for using fire as a management tool.

“We will work cooperatively with the Forest Service to implement prescribed burns within potential sheep habitat in the Catalinas,” the document says. “We will also encourage allowing natural-caused wildfires to burn provided they do not pose a threat to human life or resources.”

Cardell and other hikers will face some restrictions aimed at giving the bighorns a shot at success on Pusch Ridge.

Heidi Schewel, spokeswoman for the U.S. Forest Service, which is a partner in the reintroduction effort, said dogs will be prohibited in the area during the bighorn lambing season from January through April each year.

Hikers, Schewel said, are prohibited from traveling more than 400 feet off designated national forest trails during that period. So-called bushwhacking, or hiking cross-country without use of a trail, also is prohibited.

Some Tucson-area residents support the reintroduction of bighorns to Pusch Ridge, but others question whether it might curb access by people — and possibly sentence the sheep to the same fate suffered by their predecessors.

Mike Harris, chief guide for the Southern Arizona Hiking Club, is a supporter, but he has a concern about continued access to the area.

“I have hiked and explored most of the peaks and canyons in the Pusch Wilderness. It has some of the most rugged terrain of all the mountain ranges I’ve hiked,” Harris said. “I have seen bighorn sheep in other mountains and I personally think it would be really great to see them in the Catalinas.”

Harris said club members have adhered to trail restrictions and will continue to do so. “The club’s biggest concern with the reintroduction of sheep is that the Forest Service may prohibit all hiking in the wilderness,” he said.

“Here’s my concern: I think there’s been a lot of environmental input into public policy that’s based on very loose science and selected facts,” Weaver said. “There’s a lot of use of trail systems and a lot of construction that could be impacted by existing environmental law should the animals be reintroduced there. That would introduce a lot of conflict that the community is not prepared for.”

Weaver added: “From a sentimental standpoint, I’d love to see bighorn sheep up there. But I think they thrive in the Kofa Mountains (near Yuma) for good reason, and Pusch Ridge is not the Kofas.”

The historic bighorn herd lived largely along Pusch Ridge itself — on the western edge of the much larger designated Pusch Ridge Wilderness area.

But what will the newcomer sheep do? What if they wander to other parts of the Catalinas or even out of the range entirely?

“We’re hoping they stay over by Pusch Ridge because the historic population was there and it’s good habitat,” McGehee said. “But you can’t predict where they will go. They could go far east of the release area. They could end up in Molino Canyon” near Molino Basin along the Catalina Highway.

Best advice: Bring binoculars wherever you travel in the Catalinas — and don’t be surprised if you spot a large, horned critter anywhere in the range.

Timeline: Bighorn sheep relocation and deaths in the Catalinas

Since 31 bighorn sheep were relocated to the Catalinas Mountains north of Tucson from mountains near Yuma in November, 16 bighorns have died —…

Pusch Ridge on the western end of the Catalina Mountains will be home to reintroduced bighorn sheep later this month. About 30 animals will be relocated from habitat near Yuma.

These bighorns were among the last living in the Pusch Ridge area in 1992. ﻿