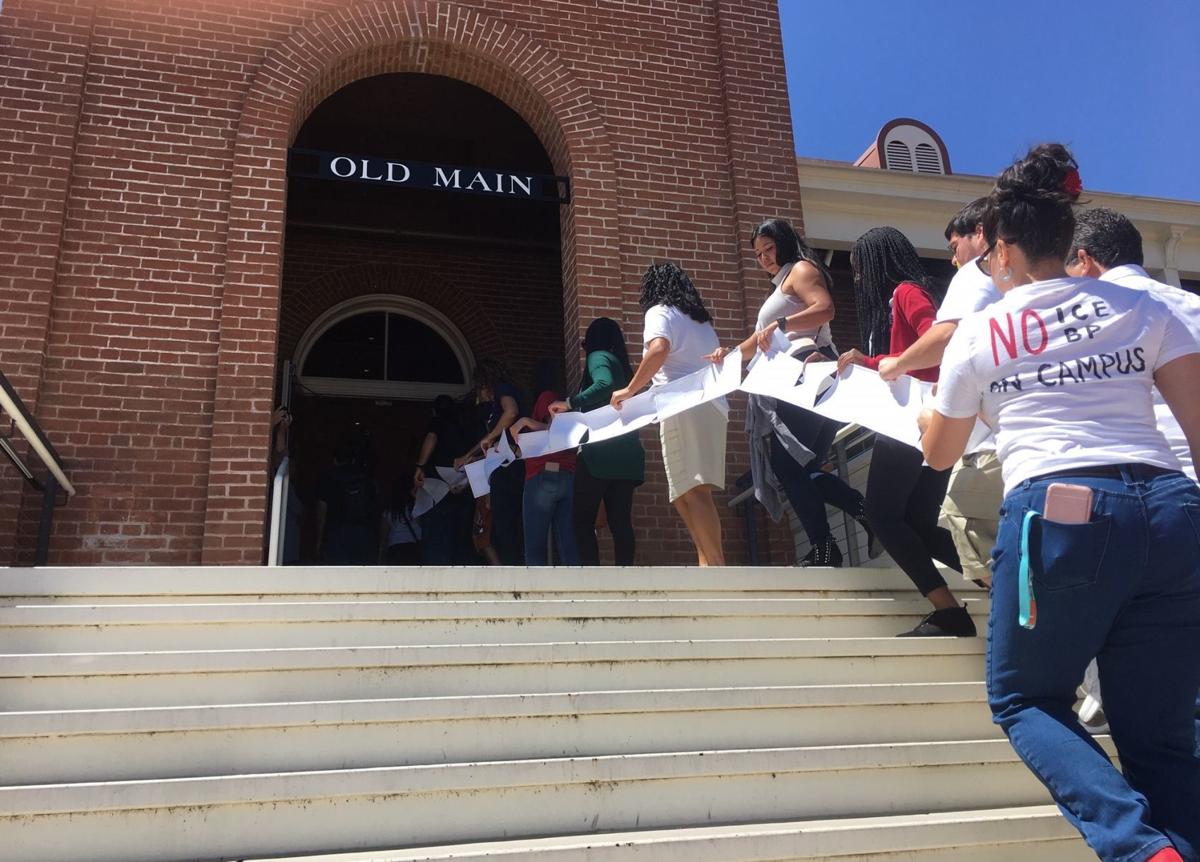 After the protesters were cited, others delivered a letter with multiple pages of signatures to UA President Robert Robbins’ office, objecting to the Border Patrol on campus.

When a UA student disrupted a presentation by Border Patrol agents last month, she came at them with a righteous grievance.

“This is supposed to be a safe space for students, but we have the murder patrol here,” Denisse Moreno Melchor said in a video that later went viral.

That was March 19, a career day at the University of Arizona, and the armed-and-uniformed agents were giving a presentation to a criminal-justice club. The incident set off an escalating cycle of victimization that is still going on. It shows how we hash out conflicts now.

You aren’t going to win any arguments these days in America if you can’t position yourself as a victim. So even if the first person comes at a conflict with a sense of righteous grievance, that is unlikely to be the last deployment. As the cycle of indignation gains momentum, real victims are sometimes created.

The initial student, Moreno Melchor, was later joined by others, Mariel Alexandra Bustamante and Marianna Ariel Coles-Curtis, police say, and they followed the agents to their vehicle, hurling vulgar taunts at them. The students’ actions were not those you’d expect of people who felt unsafe in the agents’ presence.

But after Moreno Melchor posted video of the disruption online, the cycle of grievance started spinning in new directions. The chief driver of it then became Art Del Cueto, the president of local 2544 of the National Border Patrol Council, which represents agents in the Tucson sector.

Del Cueto, who is also vice president of the national union, ranted about the incident on the radio and his Green Line podcast repeatedly, arguing that the two agents making the presentation had been “attacked” and that he planned to go after Moreno Melchor for the transgression.

Fair enough, but his framing of the agents as overmatched victims was a little far-fetched. And, far from an underdog, Del Cueto and the union he represents are closely tied with the president of the United States, whom Del Cueto has met with and who quoted Del Cueto in an April 2 tweet. They are powerful.

Nevertheless, Del Cueto said he had been researching Moreno Melchor and promised, “I’m going after her.”

“If she is on federal grants or some kind of assistance to go to the university, I want that looked into,” Del Cueto said.

Finally, he confessed, if he had been off-duty and she had done this to him, “I would have punched her in the throat.”

Righteous victimhood was for some time on the agents’ side, as Del Cueto touted the video and pressured the university to take action against the protesters who harassed the agents. But he ran so far with the grievance claims that Moreno Melchor and others, including the Mexican American Studies Department, received threats. After claiming a sort of theoretical victimhood at first, while protesting the agents, now she was becoming a real-life victim. And Del Cueto, who at first was defending the bullied, now was becoming the bully.

I spoke with Moreno Melchor on Friday, and she said she hasn’t been back to campus since the controversy broke out, because of fear.

How that happened is curious. On the day of the protest, UA Police Department officers eventually showed up at the room where the agents were giving their presentation and she was protesting. The officers shut the door and didn’t do much else. They certainly did not see the need to cite the protesters for crimes. But after Del Cueto’s pressure and a flood of calls from the outside, including from alumni and donors, the disruption was eventually considered a crime.

The women who, in my mind, had started this mess by questionably proclaiming a threat had actually become a victim of a sort of persecution. Their initial overkill had led to union overreaction, which led to university overcompensation.

Many of the protesters’ defenders have pointed to the contrast of how the university treated “Brother Dean” Saxton, a street preacher who for years harangued passersby on the UA Mall, saying, among numerous other vulgar screeds, that women deserved to be raped. Saxton wasn’t cited or charged with a crime until he physically assaulted someone in 2016.

The protesters, now known as the “Arizona 3,” were cited after one instance of verbal harassment.

I requested an interview with UA President Robert Robbins Monday, and on Friday his spokesman said he would not be giving interviews on this topic until after an April 23 “campus conversation.” But I was on campus late Friday afternoon, ran into Robbins and was able to speak with him briefly. One of the things he said was that he rejected the Brother Dean comparison, because as offensive as Saxton had been, he had not disrupted a specific event inside a university building and classroom.

He also questioned my assertion that political pressure had anything to do with the UA police citing the three protesters, claiming that police had investigated the incident continually from the time it happened until they issued the citations.

More than three weeks after the original incident, we are experiencing the counter-counter reaction. I attended a demonstration on campus Wednesday, in which hundreds of students and faculty delivered letters of protest to Robbins’ office, demanding that the charges be dropped against the Arizona 3.

They are arguing that the criminal charges represent a restriction of the original demonstrators’ free speech. They also want Border Patrol and Immigration and Customs Enforcement officers banned from campus.

Moreno Melchor broke down the argument for me, and it had internal logic, even if it didn’t convince me.

She grew up in Phoenix among families who were of mixed status — some members documented and others not. For them, the Border Patrol represents an immediate threat that their families could be dissolved, their lives shattered.

“To people who aren’t directly or indirectly impacted by this, to people who haven’t had the pressure of dealing with this, who haven’t worried about status or skin color, they may not realize the immediate danger that it is,” she said.

Point taken, especially in the sense that a person like me doesn’t feel that deep unease and vulnerability that a student like Moreno Melchor could. When I asked her about the idea that students or teachers might want agents on campus for an immigration discussion or a career-day visit, she said their perspectives are not worth hearing.

“I don’t think the perspective of the actual Border Patrol is the one you should be getting, as opposed to the one showing people what Border Patrol really is,” she said.

And that’s where I see the righteous grievance of all the UA protesters going too far. The Border Patrol is a government agency involved in the most controversial phenomenon of the moment — migration. Their perspectives are worth hearing, especially now. Besides, as Robbins confirmed to me, it would not be legal or possible to ban them from campus, even if the university decided it wanted to.

In other words, we have to live together, on campus or off, uniformed or civilian. There is no sanctuary from each other, even on campus. Our heartfelt grievances or sense of victimization don’t change that.

The three women have been offered a diversion program instead of prosecution, says the Pima County Attorney’s Office.

Steller: Time for a moratorium on politicians visiting the Arizona-Mexico border

They come to the border with their preconceived notions, and leave with photos and videos of themselves along the border fence

The state Constitution bans people from forming an "armed body of men." Plus more on the AZ GOP, a new Ally Miller staffer, and a border-wall brainstorm.

Irineo Mujica undoubtedly has relevant information, but he could be an awkward witness for either side if called in Scott Warren's trial.

After the protesters were cited, others delivered a letter with multiple pages of signatures to UA President Robert Robbins’ office, objecting to the Border Patrol on campus.