Steller column: Time to draw a line for nature, in Avra Valley
Share this
1 of 3 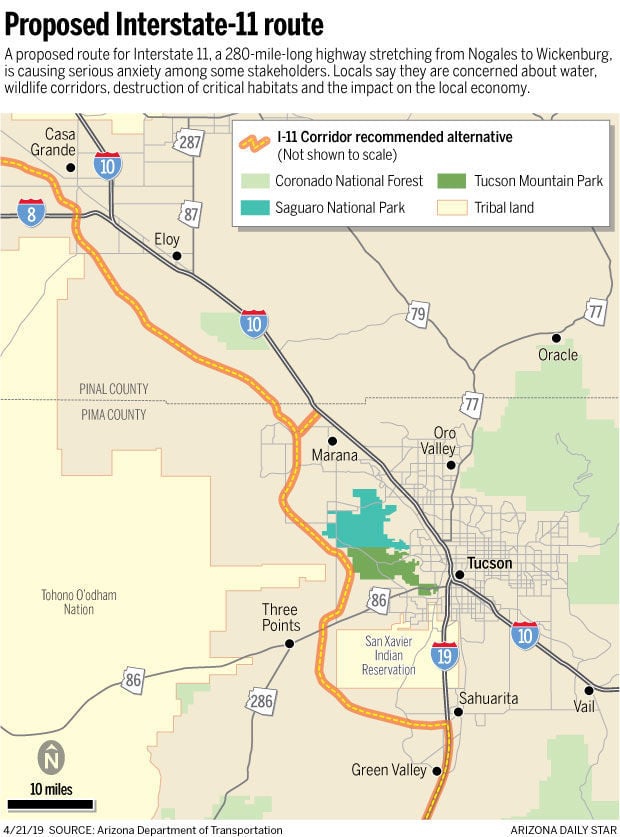 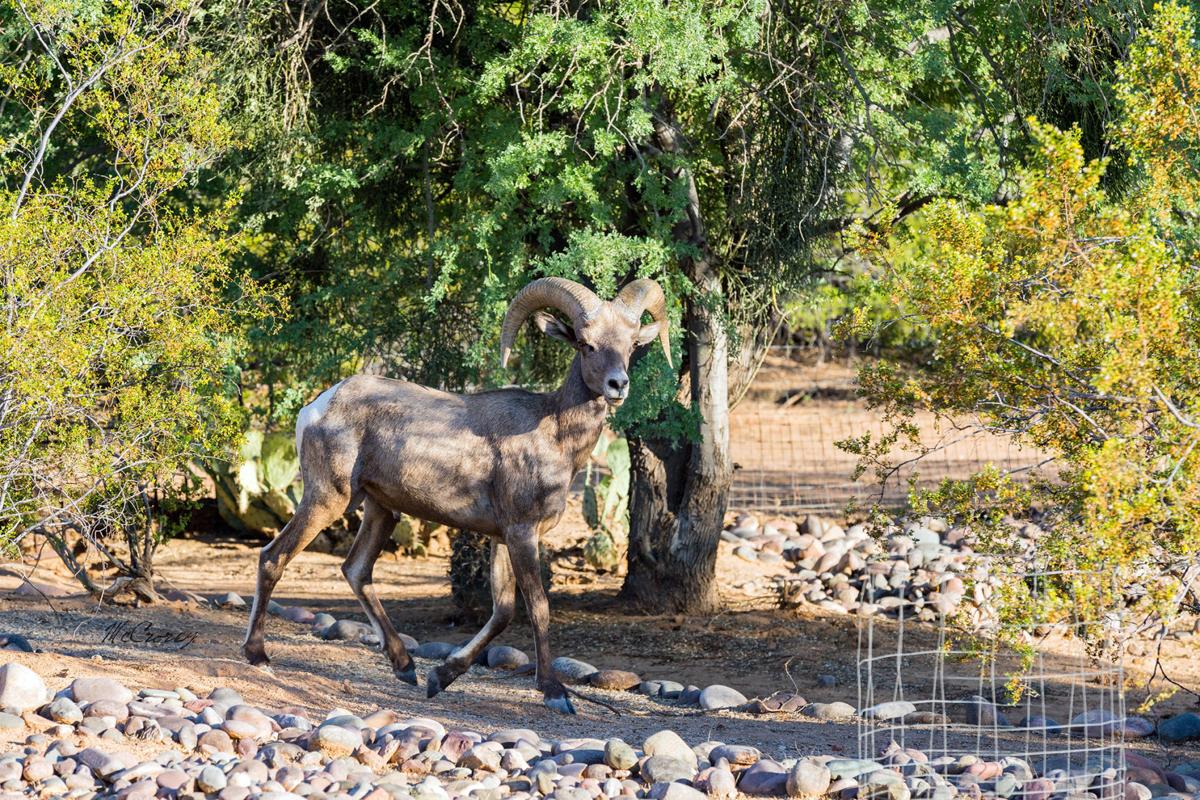 West of the Tucson Mountains, bighorn sheep can cross from range to range without too many obstacles. Interstate 11 could change that.

People moved here, cities expanded outward, the transportation department built highways on the outskirts, and development followed the new roads in a cycle that repeated and built on itself. Phoenix metastasized into the monstrosity it is that way.

Now the Arizona Department of Transportation is recommending construction of I-11, a new interstate highway running in part west of the Tucson Mountains, serving as a bypass of Tucson. It would also roughly parallel I-10 all the way to Wickenburg. It’s meant to facilitate international trade as part of the long-imagined Canamex Corridor, leading from Nogales, north to Las Vegas and beyond to Canada.

But inevitably if built, it would also cause development along the rural corridor, including the area between Saguaro National Park and Ironwood National Monument.

In the 21st century, we need to look at these proposals differently than we did last century.

The United Nations report on extinctions around the globe, released last week just as ADOT was conducting hearings on the proposed interstate, shows why.

The figure that most news outlets highlighted is that 1 million of around 8 million known species, most of them insects, are in danger of extinction over the next decades, a catastrophically fast pace. That means we’re on the verge of causing a mass extinction.

This affects not just the extinguished species but every creature that interacts with it — that eats it or is eaten by it, for example — with effects rippling outward along the web of life.

We humans are not immune from impacts if, for example, pollinators disappear and can no longer fertilize food crops. The ramifications are frightening, for them and for us.

The leading cause of extinctions is both obvious and important: Changes in the way people use the land and the sea. We’re making it ever harder for other species to survive as human numbers grow and we dig into every cranny of land and plunge into every nook of the oceans. It’s not sustainable — it’s dangerous.

Now, Avra Valley is not an untouched wilderness. It is a rural area on the northern end, and semi-rural on the southern end near Arizona 86, where suburban development has happened west of the Tucson Mountains.

But it is an invaluable home to animals, insects, birds and plants. It’s a place for them to thrive and a corridor where deer, bighorn sheep and other creatures can cross from mountain range to mountain range without too many obstacles.

Diane Call, a resident of the rural western stretch of the valley for 15 years, told me that even setting up her small, low-impact human home there has caused changes.

“Just our living on this land has already been destructive. There were desert tortoises on this land. They aren’t anymore,” she said.

Call attended a hearing last week in Tucson, one of two held in the area by ADOT on the proposal that followed the release of an environmental impact statement in April. The Arizona Department of Transportation is also accepting comments online at i11study.com.

The department emphasizes that while it is exploring a 2,000-foot corridor for the new interstate, the actual highway alignment would only be 400 feet wide, including traffic lanes, exits, frontage roads. This suggests it would actually be quite narrow in a valley five miles wide in some stretches.

Also, the plan would include several strategies intended to mitigate the interstate’s impacts, such as installing seven wildlife crossings in the stretch between Sahuarita and Marana.

But this minimizes the magnitude of what would really occur if I-11 were built. A research category known as “road ecology” has shown how new highways have much broader effects than just the breadth and length of their path.

More important, each exit would likely become a node of development, expanding outward over time. The 400-foot-wide road would quickly expand its impacts outward in multiples, said Carolyn Campbell of the Coalition for Sonoran Desert Protection.

She was one of the leaders who helped push passage of the Sonoran Desert Conservation Plan in 1998. The plan was intended to protect wildlife habitat and limit sprawl in Pima County, in part through purchasing properties, two of which might be affected by the proposed I-11 if it’s built in Avra Valley.

“This would devastate (habitat) connectivity,” Campbell told me. “The conservation plan didn’t necessarily stop sprawl. The freeway would absolutely contribute to sprawl.”

The majority of people who have commented on the proposed I-11 route west of Tucson have opposed it. In 2007, the Pima County Board of Supervisors passed a resolution against it, even though some of the county management, including administrator Chuck Huckelberry, have expressed guarded support at times.

City of Tucson officials have expressed concern both over the diversion of travelers from Tucson proper, and the construction of the freeway near the city’s water-recharge basins.

The Arizona Game and Fish Commission has come out in opposition and the National Park Service has expressed concern.

But an I-10 bypass through Avra Valley seems to have a momentum of its own. It has long been envisioned for accommodating growth, Tucson attorney and civic activist Si Schorr told me. He supported the idea when he was on the state transportation board 10-plus years ago, and it predated that period by decades. The 2008 recession seemed to have killed the idea off, Schorr said. But now the bypass idea has combined with the Canamex Corridor to revive the dream.

“The economy will continue to grow,” Schorr said. “We’re not going to see the elimination of truck or automobile traffic in the next 40 to 60 years. It has to be smart growth. If we don’t provide for it, others will, and we’ll lose economic growth.”

There is an alternative: ADOT could widen I-10 through Tucson to accommodate the trade corridor, but that would lead to some neighborhood destruction.

The department eliminated the idea of stacking freeways on top of each other, or tunneling, as too expensive and inadequate for the corridor concept, Laura Douglas of ADOT told me.

The department could also pick the “no-build” option and do nothing special to accommodate international trade. Congestion on I-10 likely would increase some, while a portion of trade would be diverted to other corridors that are faster.

The logic for building a freeway through Avra Valley is clear enough, but it belongs to another era, when the spread of cities could be something to celebrate, and the threat of a mass extinction was not looming over us.

As I think of the alternatives, I think of an especially shocking piece of data from the U.N. report: The biomass of all wild mammals on Earth has declined by 82 percent. This is mostly because we’ve wiped out their habitat.

We’ve got to draw the line and stop killing off nature somewhere. Avra Valley seems like as good a place as any to start.

Letter: Re: the May 12. article “Steller column: Time to draw a line for nature, in Avra Valley”

West of the Tucson Mountains, bighorn sheep can cross from range to range without too many obstacles. Interstate 11 could change that.