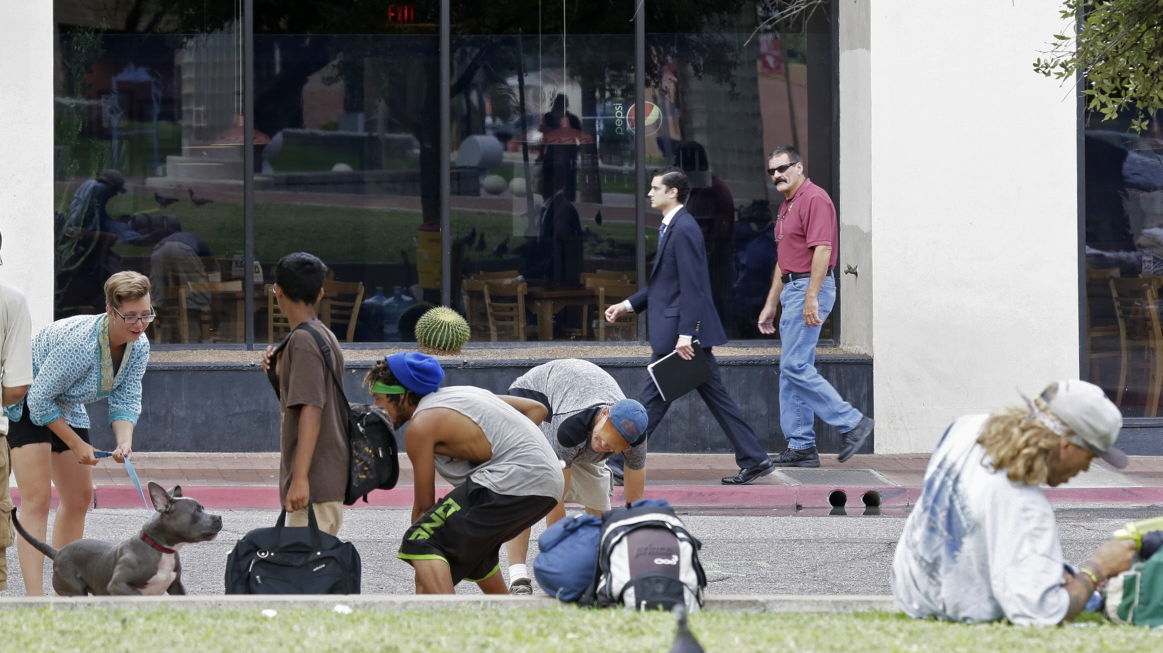 This 2015 file photo shows how many pedestrians used to choose the south side sidewalk across from Jacome Plaza to avoid the homeless along W. Pennington St. in front of the downtown library.

Back in 2015, you could always find zombies on Spice stumbling around Jacome Plaza.

Homeless people and addicts dominated the plaza outside the main library downtown, and many were using the synthetic drug that turned them into the swaying dead, swerving around the park, or left them passed out on the ground. The ensuing couple of years featured some improvement, but not a lot.

Today, you’re more likely to find passersby picking up ping-pong rackets and playing on a table placed there by the Downtown Tucson Partnership than to see a Spice zombie. The Jacome homeless camp, for now, is no more.

But what it took to make the plaza this way, and what it takes to keep it this way reminds me a bit of what they say about sausage-making. If you saw the process, you wouldn’t enjoy the outcome.

The Downtown Tucson Partnership has been the agent of the transformation. The partnership exists to perform enhanced services downtown, paid for by assessments to property and business owners in the Downtown Tucson Business Improvement District. It’s best known for employing the purple-shirted security guards who patrol downtown and provide a 24/7 presence in Jacome Plaza.

The partnership did a few surveys and found that business owners, property owners, board members and others invested in downtown viewed homelessness as the biggest obstacle to the area’s development. At the same time, executive director Kathleen Eriksen, whose office is across Stone Avenue from the plaza, was growing increasingly frustrated by the fact that the park seemed off-limits to the general public because it was so populated by the homeless.

Through permits with the city, the partnership took management of different parts of the park at different times. Now, for example, a wedge of the park is a “downtown office,” with tables, chairs and an internet connection. It’s pleasant: I’ve written two columns there.

In December, the partnership joined with Old Pueblo Community Services to offer services to people in the park needing them.

“We want to be extremely intentional to handle the situation with compassion first, enforcement second,” Eriksen said.

And the group claimed great success — 44 people helped into housing or shelters, Eriksen said in a press release. That seemed to make a big dent in the population of 50-plus people who were sleeping at the plaza and on nearby sidewalks.

Or maybe they simply were moved.

When I visited the nearby Z Mansion Friday morning, many homeless people getting breakfast there were anxious to tell me about what they considered mistreatment at Jacome Plaza. One of the principal complaints: middle-of-the-night power-washing.

To understand how this works you have to understand the hours. You are permitted in the park from 6 a.m. to 10:30 p.m. After that time, you can be on the adjacent sidewalks, but not in the park. So, at 10:30, many of the homeless people would move from one side of the faded boundary line that the city has painted in the pavement to the other, to roll out sleeping bags and go to bed.

In recent weeks, according to five people I met at Z Mansion, partnership employees have shown up to power-wash the sidewalk where they were sleeping between midnight and 4 a.m.

“They’re just rude,” Alex Noperi told me. “They started pressure-washing — the mist comes and it’s cold. That’s how they wake us up.”

Eriksen and her security chief, Russ Stone, denied to me that they were power-washing the sidewalk where people sleep in order to inconvenience them and move them, but they acknowledged doing it in the middle of the night.

As Noperi and others explained it to me, the power-washing was just part of a bigger pattern. The purple-shirted security guards would prevent homeless people from sitting on park benches, pointing to rules that say “No camping, temporary living accommodations, shopping carts or storing of personal items.”

I witnessed how this works when Steven Trejo walked into the plaza Friday after I interviewed him at Z Mansion. Trejo put his duffel bag on a concrete bench, leaned against it as if to take a rest, and was immediately told he couldn’t do that and would have to leave by a partnership security guard.

His apparent offense was having a duffel bag and taking a momentary rest on the concrete bench. Yes, it’s a public bench in a public park, but one that the partnership has made its own as part of the outdoor office project.

“They did everything possible to push us out of there, and they’re continuing to do it,” Noperi said. “All they do is push us from one place to another.”

“They pushed us all over the park,” Olympia Campbell told me. In essence, “They made it a private facility.”

Noperi told me he filled out the survey provided in the library plaza and ranked highly as a person who was quickly eligible for housing. But nothing was available.

Tom Hill, who runs the Z Mansion, told me Old Pueblo has been signing up people in the area for a year, but with the housing supply limited, it’s questionable anyone got new housing out of the outreach in the plaza.

And while the partnership has been the main agent of change on the plaza, it’s clear the city of Tucson is pushing in the same direction. The city has denied Pastor Amos Joung, who has handed out coffee and doughnuts downtown for years, a permit to do it there anymore while allowing him to continue at parks outside downtown, he told me.

So while the Downtown Tucson Partnership has acted the heavy in clearing out the park, the city has been behind them. And, honestly, the place does have a better, more welcoming feel.

“Now we have a space where women, children, office workers can feel safe in this space,” Eriksen said. “That’s just a basic quality of life issue.”

That’s true, but let’s not kid ourselves about how we got there.

This 2015 file photo shows how many pedestrians used to choose the south side sidewalk across from Jacome Plaza to avoid the homeless along W. Pennington St. in front of the downtown library.