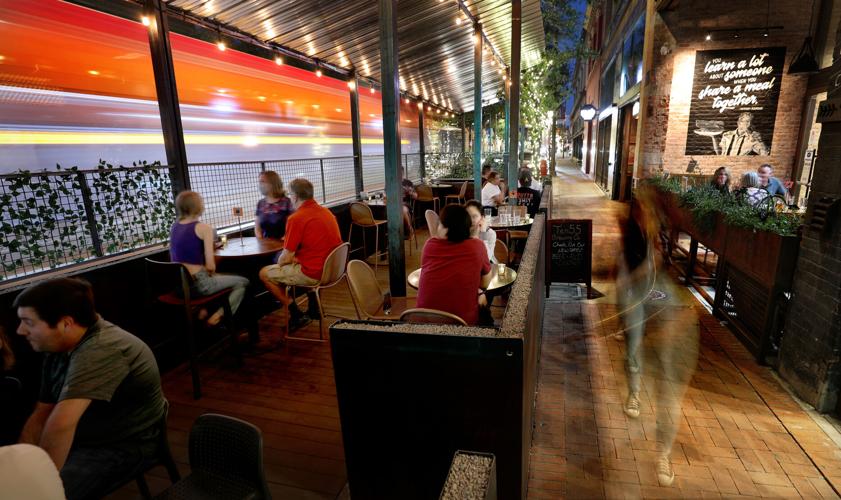 A streetcar speeds past the patio area along the sidewalk entrance to Ten55 Brewing, 110 E. Congress. 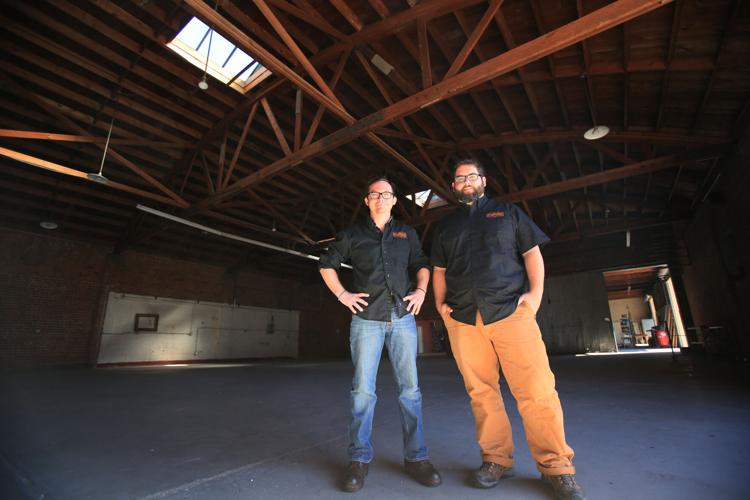 Chris Squires, left, and John Paul Vyborny of Ten55 Brewing in 2016. The brewery is leaving downtown Tucson for bigger digs in midtown.

After four years on East Congress Street, Ten55 Brewing Co. is leaving downtown Tucson and heading to a 12,000-square-foot space in midtown.

A downtown restaurateur, meanwhile, is opening a new venture in the space that will focus on classic American cuisine.

Ten55 at 110 E. Congress St. will close at the end of business Sunday, May 29. Sometime this summer, Patricia Schwabe, who owns Penca at 50 E. Broadway, will open Blue Front, a restaurant with a menu of burgers, classic tuna melts, milkshakes, salads and soups that Schwabe said will be reimagined with an attention to detail and quality.

Rio Nuevo is supporting Schwabe’s restaurant with $300,000 for the remodel as part of its mission to revitalize downtown, according to a Rio Neuvo press release.

Ten55 managing partner Chris Squires would not say specifically where he and partner John Paul Vyborny are moving their brewery, which they launched nine years ago in an industrial space on the south side. The pair have agreed to lease terms but have not yet signed the lease, he said.

“It’s bittersweet, of course,” Squires said. “I love downtown; we are sad to be leaving.”

The move comes after Ten55 changed its business model during the pandemic when it was forced to close the dining room. The brewery pivoted to production and signed a deal with the regional behemoth Finley Distributors to sell beer in local restaurants and resorts and retail outlets including Safeway, Sprouts, Trader Joe’s and Albertsons.

“If I’m being honest, this little brewery restaurant is not built to feed that capacity,” Squires said. “We need more production space. With a larger production facility, I can make pitches that I haven’t been able to make because I wasn’t sure we would be able to fulfill those commitments.”

The new location, which will include dining and a beer garden, will allow Ten55 to triple its production.

Squires said they will continue brewing at the Congress Street location “right up to the last minute until I have to move those tanks.”

The multimillion-dollar move will include removing doors at both locations to accommodate the brewing tanks and equipment, building out the new space and buying new brewing and kitchen equipment.

Schwabe said she will renovate the front part of 110 E. Congress and hopes to open in 45 days or so. Once Ten55 removes its tanks from the back end of the space, she will expand the restaurant.

Ten55 expects to open its new space in late fall.

Blue Front gets its name from the clothing store of the same name that sold women’s and men’s fashions on East Congress Street in the early 1900s.

An author seeking to piece together the cultures and traditions that make America special made a stop in Tucson to learn how to make tamales.

A new Latin-fusion restaurant is coming to downtown Tucson

For Star subscribers: Tabu will have a mixologist-driven cocktail menu and dishes that borrow influences from Mexico City and south of the border.

For Star subscribers: Globally, economic growth is expected to drop off significantly in 2023 as supply disruptions and labor shortages take their toll.

The 1959 Western "Last Train from Gun Hill" stars Kirk Douglas and Anthony Quinn and was filmed at the Empire Ranch in Sonoita.

Crews will continue to patrol the perimeter and check for any hotspots or smokes within the fire’s interior.

For Star subscribers: After pandemic's perfect storm, the 45-year-old restaurant that started out as an outpost of Swensen's will close no later than June 15.

For Star subscribers: For 32 years, László Veres was the personality and the persona of the Tucson Pops orchestra's "Music Under the Stars" concert series.

A streetcar speeds past the patio area along the sidewalk entrance to Ten55 Brewing, 110 E. Congress.

Chris Squires, left, and John Paul Vyborny of Ten55 Brewing in 2016. The brewery is leaving downtown Tucson for bigger digs in midtown.