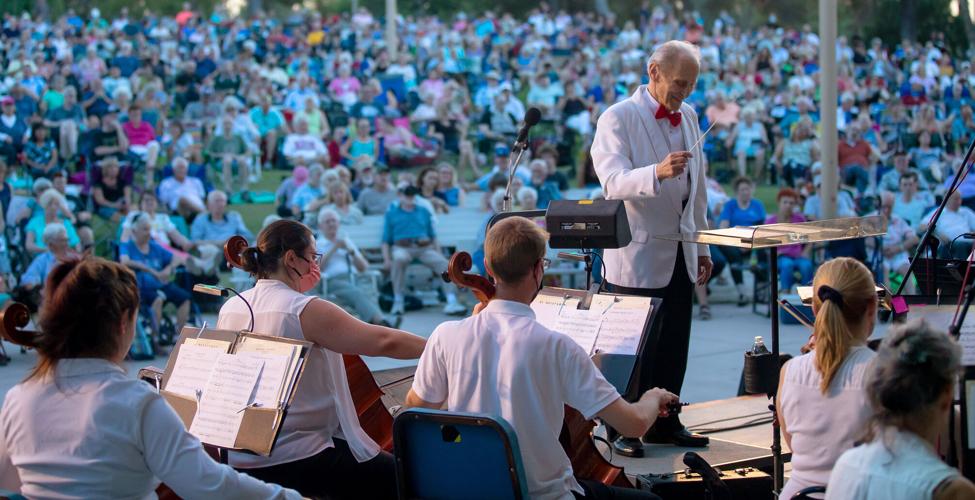 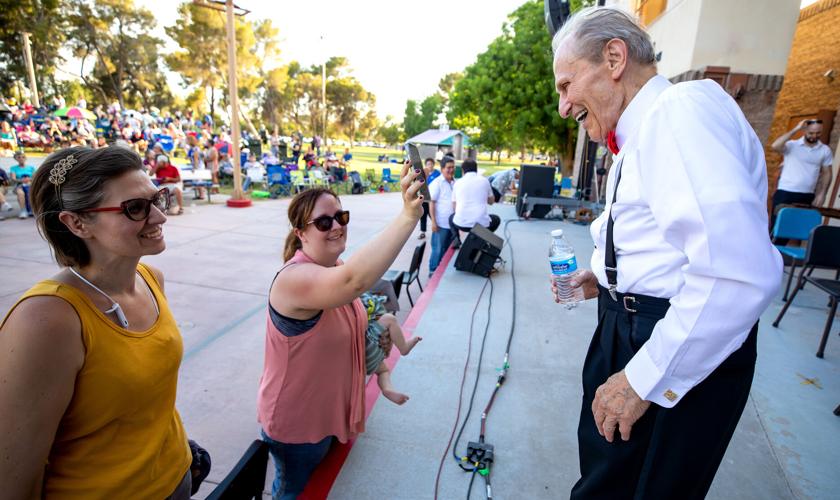 Maestro László Veres smiles while talking with a former student Amanda Glenn via FaceTime as well as talking to Amy Roberts, center, and Amber Roberts before Veres’ final concert with the Tucson Pops Orchestra at George DeMeester Performance Center at Reid Park on June 12.

In a truly rock star moment, a woman screamed “We love you!” from somewhere among the nearly 6,000 people at Reid Park’s DeMeester Outdoor Performance Center last Sunday.

As the sun was setting on the other side of the sprawling grassy hill, Susan Putt held up a big sign that said “Love you, László” while retired Tucson City Parks employee Raymond Woyak was sneaking a moment with the Tucson Pops Orchestra conductor László Veres moments before he took the stage for a final time.

“I had to come back,” said Woyak, who had missed only three “Music Under the Stars” concerts in the 45 years that he worked the DeMeester sound board; he retired from the Tucson Parks and Recreation Department in 2015. “László and I go back such a long time.”

Sunday was Veres’ 227th, and final, concert with the Pops Orchestra, which he led for 32 years — 27 of them as the full-time music director/conductor. The event had the feeling of a rock concert meets backyard family gathering, which is how these concerts held in the spring and fall have long felt with Veres at the podium.

“He’s such a gem of Tucson,” said Putt, who has attended Tucson Pops concerts with a group from her Oro Valley church for the past several years. “Not only is he brilliantly talented, but he is entertaining and inspirational.”

“He’s personality personified,” said first-timer Jim Nicolai, who was at Sunday’s concert with his violinist teen son Jude. “You can see the chutzpah in him … and you can tell he’s having fun.”

“He’s got a fun sense of humor both with the audience and with the orchestra,” said longtime Tucson Pops Concertmaster Michael Fan. “He tells terrible jokes, but he makes them funny for some reason. When he tells a dad joke, it comes off OK. Maybe it’s the accent that makes it sound cool.”

The Hungarian-born Veres, who turns 85 on Sunday, June 19, decided a couple of years ago that the 2022 spring concert series finale would be his final bow with the orchestra, comprised of moonlighting Tucson Symphony Orchestra players. Two years ago, he began auditioning his replacement and winding down his tenure.

His finale was filled with little surprises, including his granddaughter Karylin flying home unannounced from Chicago and the city parks department crew presenting “The Maestro” with a special gift.

Veres had a few well-worn surprises for the audience, as well, little gestures that have been signatures for as long as anyone can remember including donning the “Phantom of the Opera” cape and mask and bringing a half-dozen drummers onstage to bang out the cannon’s boom at the end of Tchaikovsky’s 1812 Overture.

Audience members held the biggest surprise of the night in their hands: the program.

Just before the orchestra struck a single note, Veres let the audience know the program was useless; he rewrote most of it no more than 72 hours before the concert, surprising his orchestra Saturday with the changes at rehearsal.

From the original program, Veres kept Tchaikovsky’s 1812 and the Act 1 prelude to Verdi’s “La Traviata,” which the orchestra was set to play in 2019 but had to postpone when the concert was canceled because of rain. He also kept the world premiere of Tucson composer Peter Fine’s “Rainstorm” movement from his much larger orchestral piece “The Journey” and Powell’s delightful “How to Tame Your Dragon” from the animated feature of the same name.

Everything else was improvised, from opening with Spanish composer José Padilla’s popular “El Relicario” — one of the first works he performed with the orchestra more than 30 years ago — to Queen’s “Bohemian Rhapsody,” which the orchestra had just played June 5.

“I never play a piece more than once, but I’m going to tonight,” Veres said.

He mixed in a little Latin spice with Miami Sound Machine’s “Conga” and some music from home with the Hungarian folk tune “Oh! My Pappa,” which Veres sung in Hungarian. He took a side trip to Broadway with the iconic “Maria” and “America” from Leonard Bernstein’s “West Side Story” and selections from “Phantom of the Opera” decked out in the Phantom’s black cape and white mask for the part.

In between the fan-favorite Broadway tune “Over the Rainbow” in a nod to Judy Garland’s 100th birthday and the Beer Barrel Polka, Jack Neuback serenaded Veres with the Frank Sinatra signature anthem “My Way.”

From somewhere in the audience, Khris Dodge was looking on at all of this with a bit of awe and a smidge of “what have I gotten myself into.”

The former music teacher, who ironically replaced Veres as head of Tucson High Magnet School’s Jovert steel band program when Veres retired years ago, was named to replace Veres with the Tucson Pops beginning this fall. His debut concert will be Sept. 11.

“It’s certainly a little imposing to follow a legend and such a big staple in our community,” said Dodge, who also is executive director of the Tucson Jazz Festival and has his own entertainment production company. “That being said, László has been super gracious and kind in allowing me to be me in the process and offering advice. I approach it in the aspect of, obviously, I will respect the past and what has been laid before.”

Although his career with the Pops is over, Veres isn’t putting away his baton entirely. He will continue directing the volunteer Arizona Symphonic Winds “until I drop,” he joked.

The Winds, which Veres formed in 1986, performs its spring and fall “Music in the Park” series at the László Veres Amphitheater at Udall Park.

Calexico's new album is a love letter to Tucson

A homecoming concert at the Rialto celebrates the community where Joey Burns and John Convertino found their musical voice.

The James Beard Outstanding Baking Award comes on the third nomination for the popular Tucson baker.

For Star subscribers: After pandemic's perfect storm, the 45-year-old restaurant that started out as an outpost of Swensen's will close no later than June 15.

Beating the heat: These summer night activities are totally Tucson

Tucson knows how to have fun after the sun goes down.

The owner of the pizzeria, who has been in the Tucson restaurant business for 45 years, said they never recovered financially from the COVID-19 pandemic.

Duo Chinoiserie will play works off their debut album, which includes several pieces they commissioned.

Singer-songwriter Paul Opocensky is playing his first shows since February as he awaits what could be the final road in his cancer journey.

Survey: More Democrats plan to vote in the fall after Supreme Court ruling

Maestro László Veres smiles while talking with a former student Amanda Glenn via FaceTime as well as talking to Amy Roberts, center, and Amber Roberts before Veres’ final concert with the Tucson Pops Orchestra at George DeMeester Performance Center at Reid Park on June 12. 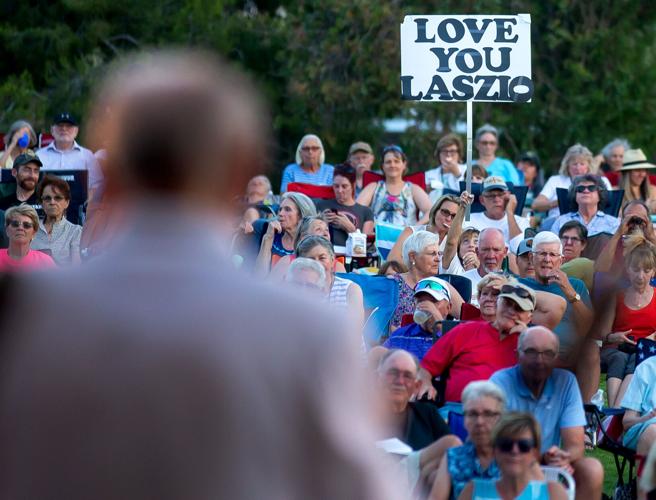 Susan Putt holds up a "Love You Laszlo" sign while Maestro László Veres speaks to the crowd during his final concert with the Tucson Pops Orchestra on June 12. 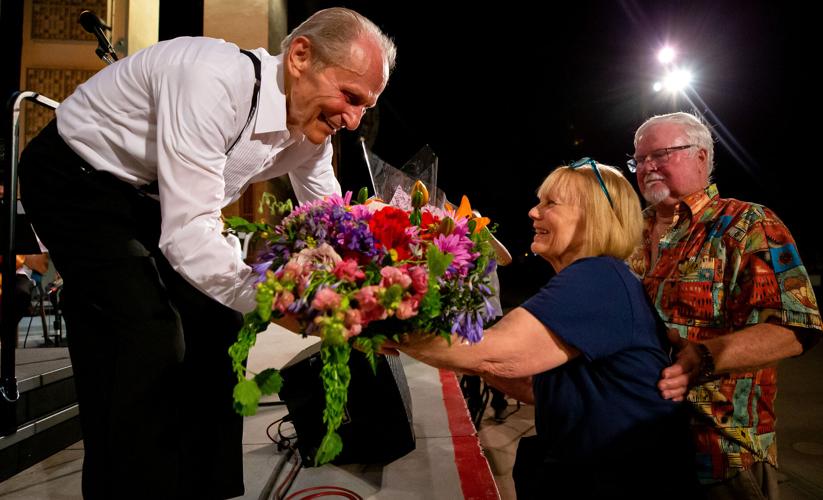 Maestro László Veres receives flowers from his wife Fran Veres during his final concert with the Tucson Pops Orchestra at the George DeMeester Performance Center at Reid Park on June 12.

Maestro László Veres shuffles through music sheets as audience members take their seats before his final concert with the Tucson Pops Orchestra on June 12. 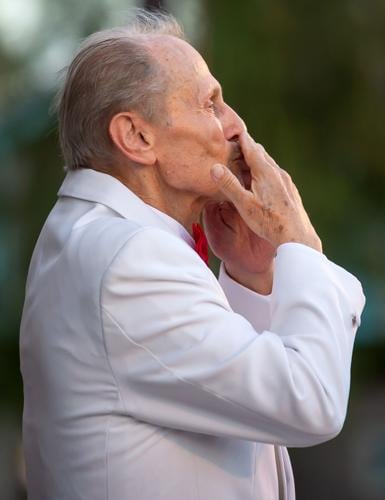 Maestro László Veres blows kisses toward the crowd as they cheer for him during Veres' final concert with the Tucson Pops Orchestra on June 12.