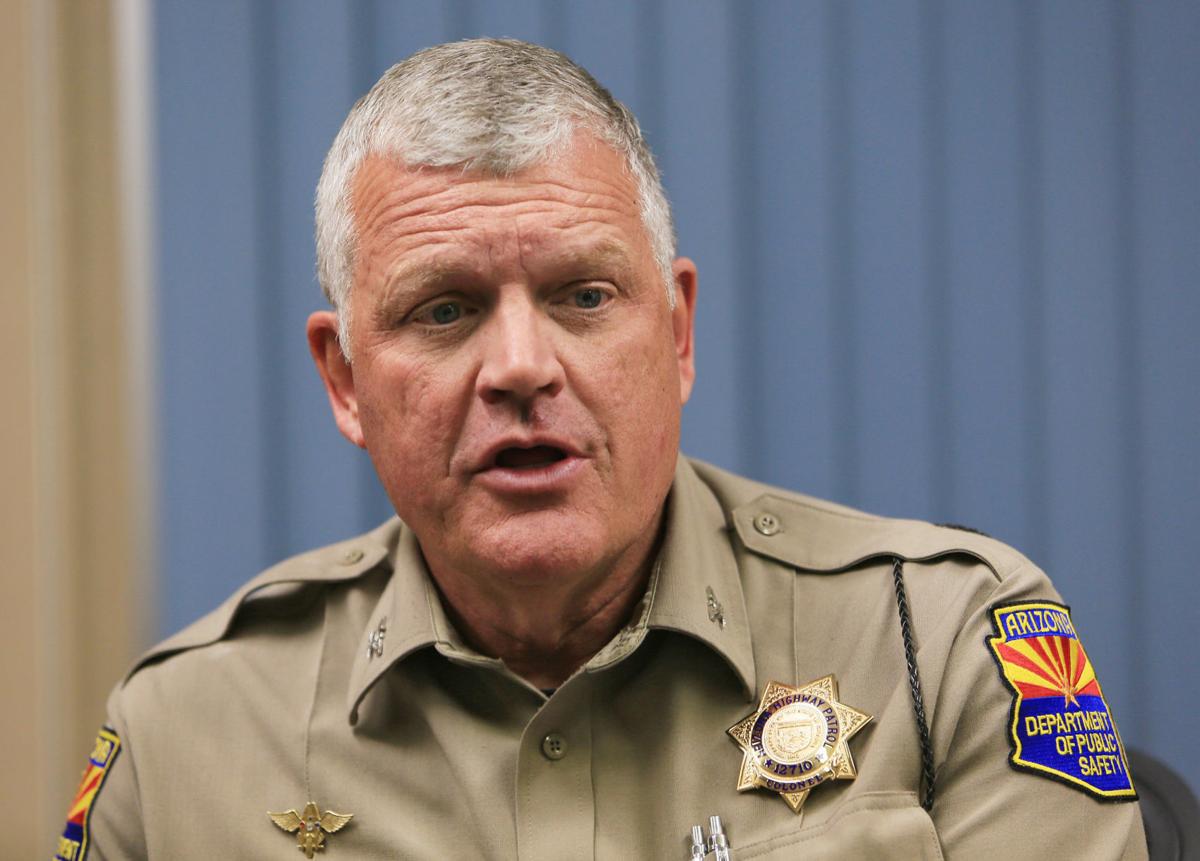 DPS Director Frank Milstead was driving 90 mph and weaving through traffic without using turn signals before being pulled over by a Yavapai sheriff’s deputy, a report by AZFamily.com found. He was let off with a warning.

Col. Frank Milstead’s moral authority starts to drain away 1 minute and 37 seconds into a body cam video of his traffic stop.

Milstead was driving on Interstate 17 north toward Flagstaff in October when a Yavapai County deputy pulled him over.

The deputy had already told Milstead that he was driving “over 90 mph, weaving through traffic” without using turn signals, and had walked away with Milstead’s license and registration.

Milstead’s fiancee, seated in the passenger seat, had implied that they were affiliated with law enforcement, but the deputy had not clued into who he was dealing with. Then, as the deputy was walking to his patrol vehicle, Milstead called him back to the car.

“I don’t know if that will help at all,” Milstead said as he handed the deputy his badge. Milstead’s fiancee, Angela Harrolle, added, “He’s the colonel. He runs DPS.”

That moment is what separates how you or I would have been treated during the traffic stop, and how Milstead was treated.

After that subtle flexing of authority, the deputy returned to his patrol vehicle, called in the stop to dispatch, then returned to Milstead and gave him a warning. No citation, even though the speed he was going represents a misdemeanor criminal, not civil, traffic violation.

We learned all this last week after KPNX Channel 12 in Phoenix obtained the body cam video from the Yavapai County Sheriff’s Office.

Milstead has responded by saying that he was trained to always announce his law-enforcement affiliation when stopped by police. And he has noted that a large percentage of traffic stops by the Department of Public Safety, about a third, lead to warnings, not citations. The implication is that the stop and its outcome were routine.

In an interview with KTAR radio in Phoenix Friday, he suggested the whole thing had been blown out of proportion.

“I am baffled that 15 over the posted speed limit, with complete contrition, everything I could do to make this palatable, that it is still an incredible story,” he said.

I am baffled that he doesn’t understand, and more baffled that his boss, Gov. Doug Ducey, has downplayed the incident, treating it as an everyday case of a driver speeding.

Actually, criminal speeding by the man in charge of traffic enforcement on the state’s highways is a really bad thing, potentially a firing offense on its own.

Weaving in and out of traffic above 90 mph is the kind of thing that gets people killed, as Milstead himself acknowledged in 2018 when talking about a legislator who exercised immunity to get out of speeding tickets last year.

“I would tell anybody who’s driving those speeds, when something goes wrong at 100 mph and above, it goes wrong very, very fast, and the consequences are very dire.”

But it’s not just about the speeding, and going back in time to a few questionable episodes in Milstead’s proud career will help to explain why that response is so inadequate.

Milstead comes from a law enforcement family. His father, Ralph Milstead, also served as DPS director, for nine years in the 1980s. Frank Milstead started his police career in Phoenix during his dad’s tenure at DPS, spent 25 years with that department, and was Mesa police chief for five years, from 2010 to 2015, before Ducey appointed him to head DPS.

It was during those Mesa years, in 2011, that Milstead had a crash. Milstead was driving his Porsche Carrera convertible up Arizona 87 north of Payson when he veered off the road and the car rolled twice, ending up perched against a pine tree. KPNX looked into that story in 2014 and found some intriguing inconsistencies.

Milstead said he was simply driving on the highway when a vehicle making an illegal pass came toward him in his lane, and he veered off the road to avoid it.

In the 2014 story, reporter Wendy Halloran noted that 40 pages were missing from the dispatch logs of the incident; that a witness named “Beth” walked into the Blue Ridge Fire Department and told them what she saw of the wreck, but that she’s unmentioned in the Department of Public Safety’s investigation; and that a Phoenix police friend of Milstead picked him up from the scene and took him to the friend’s cabin, even though Milstead had a head injury.

A retired Mesa police union official, Javier Cota, told KPNX he suspected that Milstead was drunk and that DPS covered it up. On the radio Friday, Milstead dismissed the people pushing the story as “conspiracy theorists.”

Halloran, the same KPNX reporter, also revealed a 2013 video made for Mesa police officers in which Milstead responds to Halloran’s public-records requests by telling officers they should “purge” their personnel files.

“I don’t want anybody to have to relive a problem that’s already been adjudicated, that they’ve already been disciplined for, that has already seen scrutiny in the public eye,” he said. “So, purge your files according to policy. Make sure that the things you don’t want in there aren’t in there.”

In September 2018, Milstead dove unprovoked into the culture wars, responding with a tweet to a Nike ad campaign featuring Colin Kaepernick, the former NFL quarterback banished from the league after he kneeled during the national anthem to protest police brutality. The ad campaign featured a black-and-white photo of Kaepernick with the slogan “Believe in something. Even if it means sacrificing everything.”

In the tweet, Milstead posted the same slogan over a photo of Tyler Edenhofer, a young DPS trainee slain in the line of duty that July. “If you’re in search of those who paid the Ultimate Sacrifice I would look to the men and women who wear a uniform and are killed/murdered keeping us safe & protecting those who can’t protect themselves,” he wrote. He had a point, sure, in that Edenhofer made a greater sacrifice than Kaepernick. But when you plot all these data points, you start to see the picture of a man who seems to believe not just in respecting law enforcement officers but also in police as privileged citizens. It’s not far from that to seeing police as deserving perks due to their sacrifices.

Indeed, his fiancee who was in the car, Angela Harrolle, is the widow of DPS officer Bruce Harrolle, who died in the line of duty in 2008, which she mentioned in the initial conversation with the deputy.

But this practice of identifying oneself as a law-enforcement officer when stopped by police is not a uniform practice. Pima County Sheriff Mark Napier told me he does it automatically. Sgt. Jason Winsky, a Tucson Police Department officer who is spokesman for the Tucson Police Officers Association, told me “we don’t train our officers to do that.”

The gun question never came up in this case. When the deputy returned to the car, he just warned Milstead, who made reference to the deputy’s boss, saying “Sheriff Scott Mascher is one of my favorite guys. I was sitting here thinking, well, one of his guys is about to write me a ticket. I was a dumbass, I was driving too fast and I got a ticket.”

But he didn’t, of course, even though you or I probably would have.

“I was elated I got a warning, because I thought I was going to get a ticket, and no one wants a ticket, not even me,” Milstead told KTAR.

That escape comes at a cost. The public can no longer view Milstead as having solid authority or credibility, because he appeared to get away with criminal speeding by flashing his badge.

Ducey ought to ask himself whether he should keep as DPS director a man who not only risked lives on the road, in direct contradiction to the purpose of his agency, but also degraded his own moral authority after being stopped. I think the answer is evident.

DPS Director Frank Milstead was driving 90 mph and weaving through traffic without using turn signals before being pulled over by a Yavapai sheriff’s deputy, a report by AZFamily.com found. He was let off with a warning.