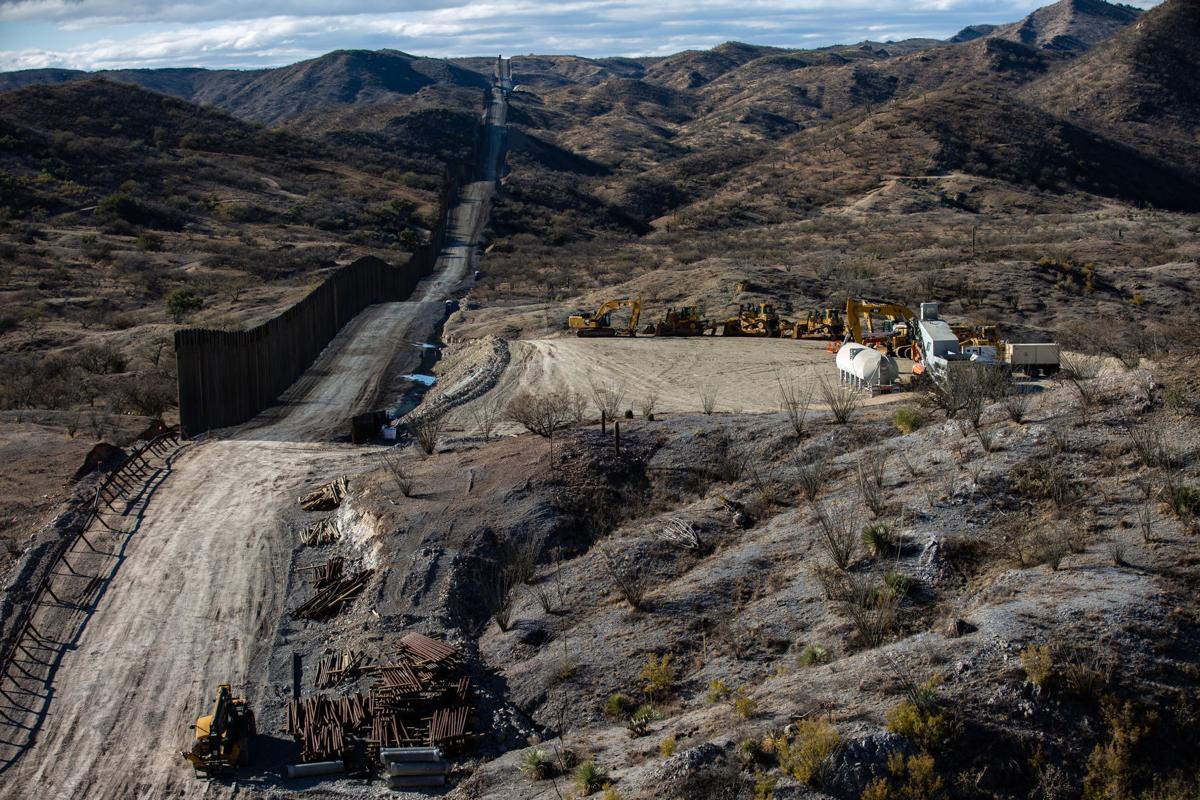 An empty construction site at the end of a section of border wall near Scribner Gulch south of Arivaca where construction crews ceased working on the project following an executive order by President Biden on Jan. 29, 2021.

The federal court filing fee was $402.

Attorney General Mark Brnovich made another court filing April 12 that appears designed to win him publicity for his next campaign and to troll liberals.

It’s the latest in the increasing number of political stunts he’s pulled as he approaches the limit of two terms as state attorney general in 2022 and must leap to another political office.

We the taxpayers, of course, are subsidizing his efforts.

Brnovich’s latest ruse was to sue the Department of Homeland Security because it stopped building the border wall. He claimed that stopping construction violated the National Environmental Protection Act. His lawsuit also says that by stopping the “Remain in Mexico” program, Biden’s administration increased the population, and that should be evaluated under the same act.

The logic, to the extent there is a sincere legal rationale, is that stopping the wall-building allowed more migrants across the border, where they litter and increase population.

The irony is so thick with this one you could cut it with a reciprocating saw, as smugglers have done with the new border wall itself.

That’s because, of course, infinitely greater damage was caused by the road-building, demolition, explosions, grading, water-sucking and habitat-splitting of the wall project itself. The Trump administration actually waived the National Environmental Protection Act to build the wall.

Now Brnovich wants to use the same law Trump waived to build the wall to force Biden to resume construction.

Smells like “absurd political grandstanding,” as attorney Brian Segee of the Center for Biological Diversity put it in a statement. Segee and others actually sued the federal government unsuccessfully to invoke the environmental protection act to stop the wall.

If you take Brnovich’s lawsuit as a sincere effort to use federal law to address environmental problems, it falls flat. I asked two out-of-state experts on the National Environmental Protection Act, and they spelled out why.

“NEPA’s concerned with action, not inaction,” said Richard Lazarus, a professor at Harvard University’s law school and an expert in environmental law. “They’re talking about the lack of building a wall as opposed to building a wall. NEPA’s application to the government’s failure to act is quite limited.”

Separately, he said, the government can be forced to consider the environmental impacts of an action like building a highway or a parking lot, which are intended to bring more people to an area. That’s not the case with unintended cross-border migration, especially if it’s illegal.

“That wouldn’t count under NEPA,” he said.

Robin Craig, a professor at the University of Utah law school and a specialist in environmental law, agreed with Lazarus that suing the government over not doing something, like not building more border wall, is almost certainly doomed.“It’s stopping a project, which means we’re leaving the environment in the status quo, which shouldn’t trigger NEPA,” she said.

The complaint about stopping the Remain in Mexico program doesn’t make much more legal sense.

Stopping it “is to halt a program that does not directly implicate the environment,” she said. “The fact that we have an immigration policy that might increase population growth doesn’t mean the policy itself has an immediate environmental impact.”

When I asked, both of these professors showed admirable earnestness and focus in discussing the merits of the lawsuit filed by the state. They didn’t scoff or rage.

Leave that to me.

During the Trump years and now under Biden, Brnovich increasingly has made a mockery of his public position, using its powers and public money to campaign for his next office.

He’s done it by unilaterally inserting Arizona into high-publicity, polarizing political issues where the state does not need to go. This has burnished his reputation as a pro-Trump conservative.

While Trump lost Arizona to Biden, any Republican seeking a statewide public office must appeal to pro-Trump voters, who dominate the GOP and will presumably pick the primary winners. Over time, Brnovich has tried to show again and again he is one of them, even if his actions misrepresent the majority of state voters.

In 2018, he unilaterally decided to join a 20-state lawsuit against the Affordable Care Act, seeking to have it declared unconstitutional. This, of course, would have undermined the state’s decision to expand Medicaid through that act, giving health care and insurance to a half-million more people.

In 2019 he inserted Arizona into the DACA litigation, filing an amicus brief on our behalf, supporting Trump’s position to overturn President Obama’s program for undocumented residents who arrived as children.

Amid Trump’s first impeachment, in January 2020, Brnovich sent a letter to Arizona’s then-senators, Martha McSally and Kyrsten Sinema, arguing they shouldn’t vote to convict. He claimed such a vote would “desecrate the Constitution’s separation of governmental powers,” as if impeachment itself were unconstitutional.

More recently, he’s zeroed in on the culture-war keywords. In an opinion piece Brnovich published on Fox News’ website Friday, he said he opposed a California requirement that nonprofit organizations disclose their major donors to the state. Disclosing donors “fuels the cancel culture,” he claimed.

You could also hear Brnovich speaking Fox News lingo in his explanation of the border-wall lawsuit to Howard Fischer of Capitol Media Services.

“The left” — this is another Fox-News phrase conservatives use often when they want to conjure a political enemy without doing the work of figuring out who they’re really talking about.

And it’s a sign of what Brnovich has become — an attorney general working for a fraction of Arizona residents to further his own political ambitions at all of our expense.

Tucson police chief Chris Magnus was a public opponent of Trump-era immigration policies. Now he's been nominated to manage the agencies that carried them out and were loyal to Trump.

Across the Tucson area, officials and residents are arguing the authority, which runs on a half-cent sales tax, operates opaquely and unfairly. It benefits suburbs and traditional road projects, they say.

An empty construction site at the end of a section of border wall near Scribner Gulch south of Arivaca where construction crews ceased working on the project following an executive order by President Biden on Jan. 29, 2021. 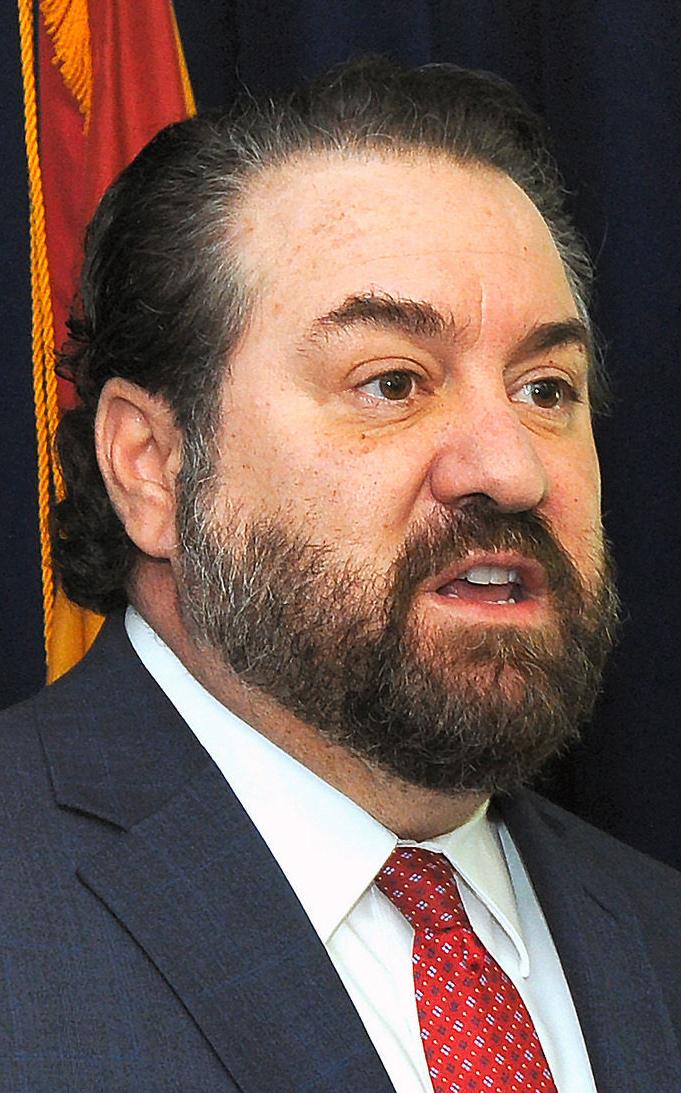