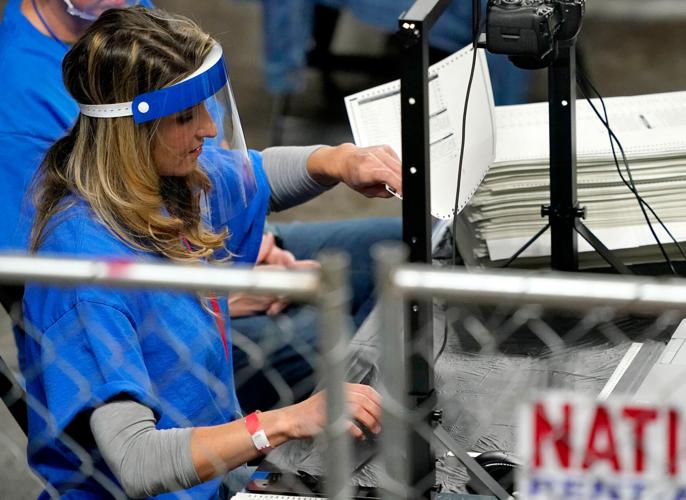 In this May 2021 photo, Maricopa County ballots cast in the 2020 general election are examined and recounted by contractors working for Florida-based company Cyber Ninjas at Veterans Memorial Coliseum in Phoenix. 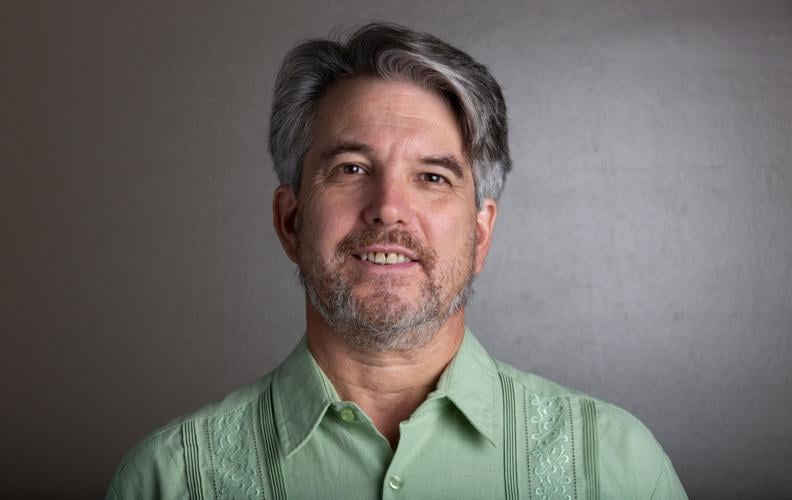 The Steve Pierce Precedent — that is a clever way of explaining the most important Arizona political event of the year.

Pierce was a Republican state senator representing Legislative District 1, the Prescott district, from 2009 to 2017. He was Senate president for one full legislative session in 2012.

But in November that year, then-Sen. Andy Biggs challenged Pierce and outflanked him from the political right, narrowly sneaking away with a majority of Republican senators to win the powerful Senate presidency.

Sen. Karen Fann succeeded Pierce in office in 2017, and she also convinced her fellow Republicans to elect her Senate president. When Trump and his supporters pressured her hard to conduct a review of Maricopa County’s election, she went along, even though her equivalent in the other chamber, House Speaker Rusty Bowers, declined.

Fann, it appears, did not want to end up outflanked on the right like Steve Pierce.

That’s one of the key insights I drew from The Arizona Republic’s recent five-part series, measuring a whopping 27,000 words, that analyzed how the Cyber Ninjas’ so-called audit of Maricopa County’s 2020 election came to be and played out. Their reporting was derived in part from public records that the newspaper wrenched out of the Senate through a lawsuit.

Meanwhile, from a different source, the latest report on the Cyber Ninjas’ performance by Tucsonan Benny White and others, we find the upshot of that “audit”: The Ninjas’ crucial count of the votes simply cannot be reconciled.

White and his colleagues Larry Moore and Tim Halvorsen, who have dubbed themselves The Audit Guys, analyzed a Nov. 1 release of data from the Cyber Ninjas’ recount. They found that the Ninjas’ hand count of ballots, which took place over months at a Phoenix coliseum, quite literally does not add up.

“We have used the official results and the Ninja database in numerous attempts to determine how they arrived at the vote totals they announced at their Sept. 24, 2021, press conference in the Arizona Senate chambers,” their report says.

“We have tried dozens of ways to include and exclude various boxes and batches to arrive at those precise figures and have been unable to replicate their announced results.”

As The Republic series shows, it was pressure from then-President Donald Trump himself, along with associates such as Rudy Giuliani, and thousands of Trump’s followers that convinced Fann to pursue a “forensic audit” of Maricopa County’s election.

In the weeks after the election, Trump called Fann and Bowers more than once each, and Giuliani called and showed up, imploring them to overturn the election results or, barring that, to conduct an audit, because of all the evidence of fraud.

Bowers demanded to see the evidence, but Fann went along, even as Giuliani’s promised evidence never appeared.

History has already shown Bowers made the right choice. In an August 2021 deposition for a civil suit in which Giuliani is a defendant, he admitted that he did not have evidence for the claims he made. He just got information from social media or from what other people told him.

“It’s not my job, in a fast-moving case, to go out and investigate every piece of evidence that was given to me. Otherwise, you’re never going to write a story. You’ll never come to a conclusion,” Giuliani said in the deposition.

While Bowers and Fann originally discussed bringing in a qualified election auditor to review Maricopa County’s election, Fann eventually followed Giuliani and others into the world of Trump supporters who wanted to overturn the election and claimed to have a way to do it, in the name of “election integrity.”

She hired the firm Cyber Ninjas, led by a man, Doug Logan, who was inexperienced in elections, had publicly stated he believed in the “Stop the Steal” movement and had stayed with the deranged election conspiracist Lin Wood while working to overturn the election.

White, who was the Republican candidate for Pima County recorder in 2020, joined with Halvorsen and Moore, who were formerly leaders of the Clear Ballot Group, a Boston-based election technology company, to try to check the work of the Cyber Ninjas. They have found the Ninjas’ work wanting, from its faulty inception.

“Normally in an audit, what you would do is take a known group of ballots, then check them against the official results,” White said this week. “The objective there is to find out if the official count is correct. But the Ninjas never attempted to do that.”

Instead, they invented a system to conduct their own hand count, and it’s this that White and company think reveals the fatal flaws of the review Fann ordered. In October, they issued a report arguing that the hand count numbers appeared to be a hoax, invented to nearly match a machine count the Senate had ordered.

The new report goes further, alleging that the Cyber Ninjas’ team miscounted original ballots that needed duplication to be correctly counted, and the duplicates made for that purpose. This problem alone led to 1,142 more ballots being counted than should have been, they say.

But the problems, again, were in the conception of the audit, they report: “The point of an audit is to determine whether there are errors in the official results and discover the reasons for the errors. The objective of the Senate ‘forensic audit’ was to create a new result for the election; this is obvious since there was no attempt to directly compare even a minimal number of batches or boxes to the official result.”

No wonder Fann never attempted to hire an experienced, unbiased auditor. That was never the point, as The Republic’s reporting shows. The point was to satisfy Trump and the election-fraud true believers, and to avoid the Steve Pierce Precedent.

For Star subscribers: Tucson, once considered an affordable town, has turned expensive. But one of the first, incremental ideas to start flatt…

For Star subscribers: Katie Hobbs, the leading Democratic candidate for Arizona governor, played a key role in a racially and sexually discrim…

For Star subscribers: About 32% of Tucson voters cast a ballot in last week's election — and that's pretty good for an odd-year municipal elec…

Linda Mendibles was a stalwart survivor on the streets south of Tucson's downtown. That she was killed in the spot where she often slept shock…

For Star subscribers: A killing and an attack on a school marked last year's general election week in Tucson. Sadly, the risks of political vi…

For Star subscribers: The group of Tucson business leaders used its ally on the Arizona Independent Redistricting Commission to win approval o…

An off-duty police officer took two women to the ground outside a Tucson restaurant, kneeling on the neck of one. His colleagues investigating…

Residents of Casas Adobes, the unincorporated area centered on Ina Road and Oracle, have reason to feel insulted after the redistricting discu…

It's an intriguing coincidence that the COVID-19 pandemic started in a city with a virology lab studying similar viruses. But a Tucsonan's new…

For Star subscribers: Tucson Mayor Regina Romero gave her State of the City speech Thursday at an awkward moment. It's hard to sustain optimis…

For Star subscribers: At a Tucson hearing, residents of a proposed new legislative district in the metro's suburbs said they have "nothing in …

In two Tucson cases, six days and a couple of miles apart, local men fired warning shots near people they said were threats. One is facing a f…

Rep. Mark Finchem said a meeting should prove or disprove election discrepancies in Pima County. It did neither, but it did keep attention on …

During the pandemic financial crisis, the University of Arizona had the biggest furlough plan of any American university — $43.5 million in sa…

COVID-19 is hitting Arizona hospitals as hard as ever, but there is hope on the horizon. New treatments and helpful mutations could make this …

Tim Steller's opinion: A skeptic's effort to be positive about 2022

Why am I feeling hopeful? In part, it's just a New Year's resolution — try to focus more on the good while maintaining my natural skepticism. …

CVS and Walgreens plan to offer the abortion pill

Top 10 reasons drivers get pulled over

Top 10 reasons drivers get pulled over

Through the horror and desperation, rare scenes of redemption in Syria and Turkey

Through the horror and desperation, rare scenes of redemption in Syria and Turkey

In this May 2021 photo, Maricopa County ballots cast in the 2020 general election are examined and recounted by contractors working for Florida-based company Cyber Ninjas at Veterans Memorial Coliseum in Phoenix.