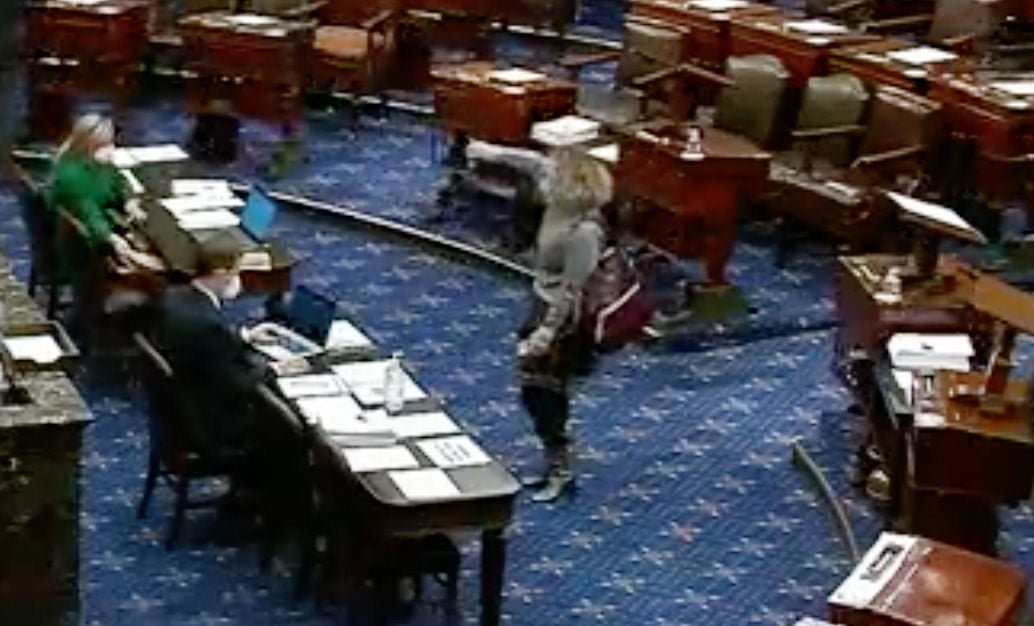 Sen. Kyrsten Sinema, D-Ariz., uses a thumbs-down to vote “no” on an amendment to the COVID relief package that would have raised the minimum wage to $15 per hour.

U.S. Sen. Kyrsten Sinema infuriated many Democrats March 5 when she turned her thumb down to an amendment that could have led to an increased minimum wage.

More important, though, is a vote she cast hours later by voicing a clear-throated “Yes.”

For more than a decade, Sinema has cast herself as a centrist problem-solver. She beat Martha McSally in 2018 by practically denying she’s a Democrat at all.

And for years she’s been preaching that the way you find practical solutions is by crossing the aisle, listening to your rivals and compromising.

In her 2009 book, “Unite and Conquer,” Sinema wrote: “Voters say regularly that they’re tired of the partisan bickering and want politicians to sit down and work out practical solutions to the pressing problems facing our country. While we hear this regularly from the public, we’ve not made any real effort to change the way we do business.”

At the time, Sinema was a state representative. Working with Republicans was the only way she could get anything done as a minority Democrat in the Arizona Legislature.

But as her winning vote on the American Rescue Plan shows, the current situation in Congress is different. It challenges her faith in bipartisanship.

With a Senate split 50-50, Sen. Mitch McConnell leading the Republicans, and the filibuster requiring 60 votes to pass most legislation, it’s unclear if Democrats can get anything else big done.

Electoral reforms, immigration laws, and, yes, the minimum wage could be sacrificed at the altar of bipartisanship.

These days in D.C., the pragmatic way for a Democrat to work may not be by reaching across the aisle, as it was when Sinema was in the minority in the state and federal houses of representatives.

In this moment, partisanship may well be the pragmatic path.

Sinema apparently doesn’t think so. Even after the party-line vote on the stimulus plan, her office discussed the bill as if it were “bipartisan,” a key word used constantly in Sinema press releases.

On Friday, Sinema spokeswoman Hannah Hurley explained, “The coronavirus relief bill was born of bipartisan negotiations and bipartisan cooperation, and Senator Sinema was key to those efforts.”

It’s true that Republicans worked on some of the elements of the bill before voting against it.

The $28.6 billion “Restaurant Rescue Plan” in the broader bill was based on an earlier bill sponsored by Sinema and Sen. Roger Wicker, a Mississippi Republican. On Twitter, Wicker even tried to take credit for passage of the restaurant aid after he voted against the broader bill.

Sinema keeps the filibuster in place

But the American Rescue Plan would not have passed in anything like the form it did if it were not a “budget reconciliation” bill. Those bills are limited to certain types of tax, spending and debt legislation and require a simple majority to pass.

Otherwise, on most Senate business, the filibuster rule requires a 60-vote majority. Some Democrats are considering trying to eliminate the filibuster, which can be done by a simple majority vote.

But Sinema and Sen. Joe Manchin of West Virginia, also a Democrat, don’t want to. Without their agreement to change it, the filibuster stays and Democratic accomplishments likely diminish.

Sinema cites the longstanding, questionable argument that the filibuster leads to bipartisan compromise.

“Retaining the legislative filibuster is not meant to impede the things we want to get done — rather, it’s meant to protect what the Senate was designed to be: a place where Senators come together, find compromise, and get things done for our country,” she said in a written statement.

“Bipartisanship is the best way to achieve lasting results for Arizona. It’s easy — and too often, expected — for elected leaders to line up on either side of a partisan battle. What’s harder is getting out of our comfort zones and building bipartisan coalitions that get things done for everyday Americans.”

Maybe, but maybe not.

There’s little evidence from recent years, especially since President Obama took office in 2009, that the filibuster leads to compromise. McConnell made it his mission to block the new president, and he largely succeeded, with the help of the filibuster.

One reason may be that filibustering a bill is totally painless. In the old days, a senator had to hold the floor and speak for hours. Now they simply send an email saying they plan to filibuster, and a bill dies, unless it has 60 votes.

Manchin has expressed openness to some reforms. One proposal, for example, is that the burden be placed on a senator to find 41 votes to sustain a filibuster, rather than putting the onus on the senator trying to pass a bill to find 60 votes.

Others have suggested gradually reducing the number of votes required to pass a bill in order to convince those engaged in a filibuster to negotiate.

Beyond her commitment to the filibuster, Sinema has not taken a firm position on proposed reforms.

Progress Arizona and dozens of other state progressive organizations sent Sinema a letter last month asking that she end the filibuster altogether.

“Democrats have the opportunity to pass popular, common sense policies to meet this moment and improve the lives of millions. And yet as long as the filibuster remains in place, it will be next to impossible to do so,” the letter said.

The letter, like many anti-filibuster arguments, notes that not only does the filibuster stifle majority rule — it also was originally used to protect the interest of slave owners, and in more recent decades, to stifle civil rights proposals.

Sinema no doubt knows all this. But she has created an identity around being bipartisan. As Chuck Coughlin, CEO of Highground Public Affairs, explained, around 30% of Arizona’s electorate is independent.

“They obviously don’t like partisanship — otherwise they’d be a partisan,” said Coughlin, a former Republican who left the party in 2017.

“I always looked at the unaffiliated part of the electorate as ‘just make it work.’ ”

Despite her protestations to the contrary, Sinema’s vote on the American Rescue Plan was not so much bipartisan as a “just make it work” vote.

It could be that today what “achieves lasting results,” in Sinema’s words, is passing good bills and trusting the voters to reward you and your party for doing so.

Watch Now: Why do the vaccinated still fear COVID?

Watch Now: Why do the vaccinated still fear COVID?

Republican legislators in Arizona are in the vanguard of a nationwide movement to restrict voting rights, in response to the 2020 election.

Arizona Attorney General Mark Brnovich says there needs to be a review of expanded public assistance benefits for immigrants at both the state and federal level.

Citing worries about influence on voters, HB 2569 would ban grants like the $6 million last year from the Mark Zuckerberg-backed Center for Tech and Civic Life.

Sen. Kyrsten Sinema, D-Ariz., uses a thumbs-down to vote “no” on an amendment to the COVID relief package that would have raised the minimum wage to $15 per hour. 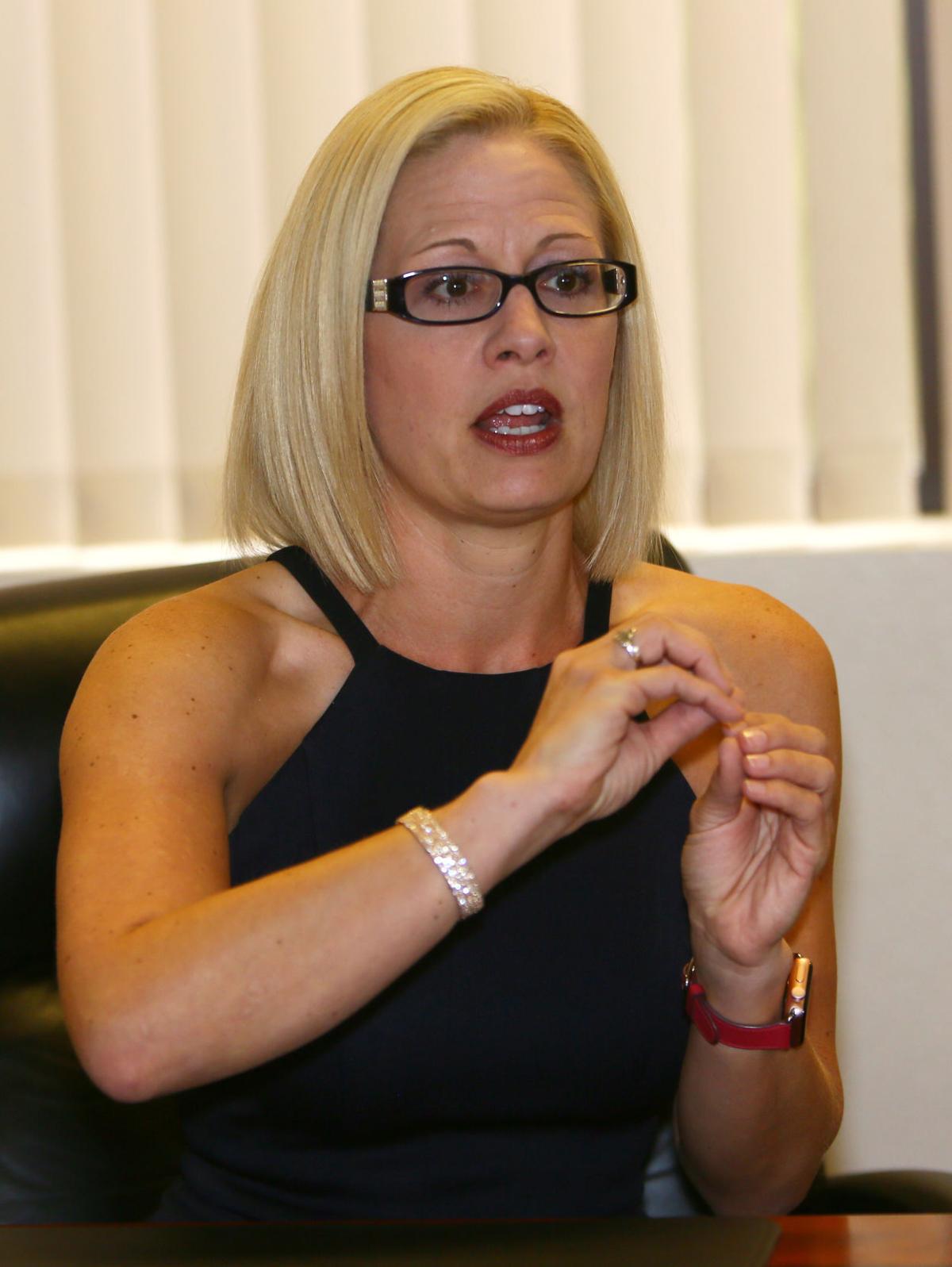