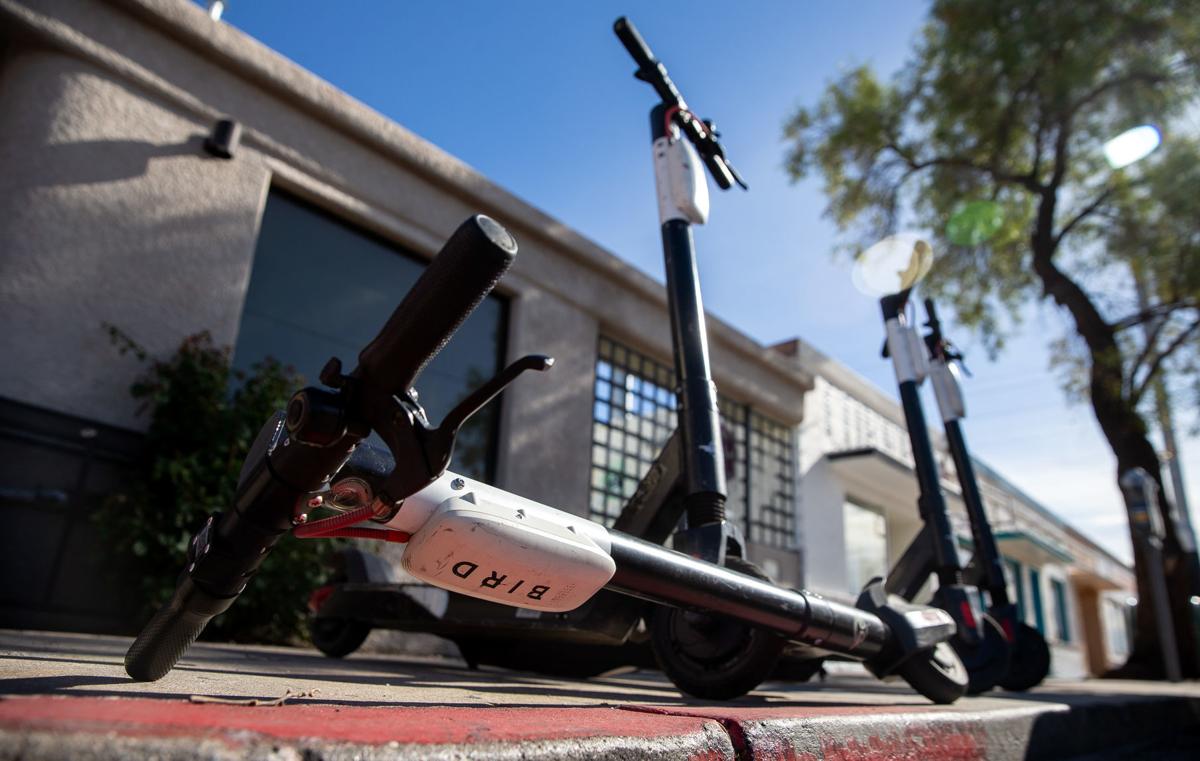 Several Tucson neighborhood groups have reported unsafe use of e-scooters in their areas, including scooters blocking sidewalks. 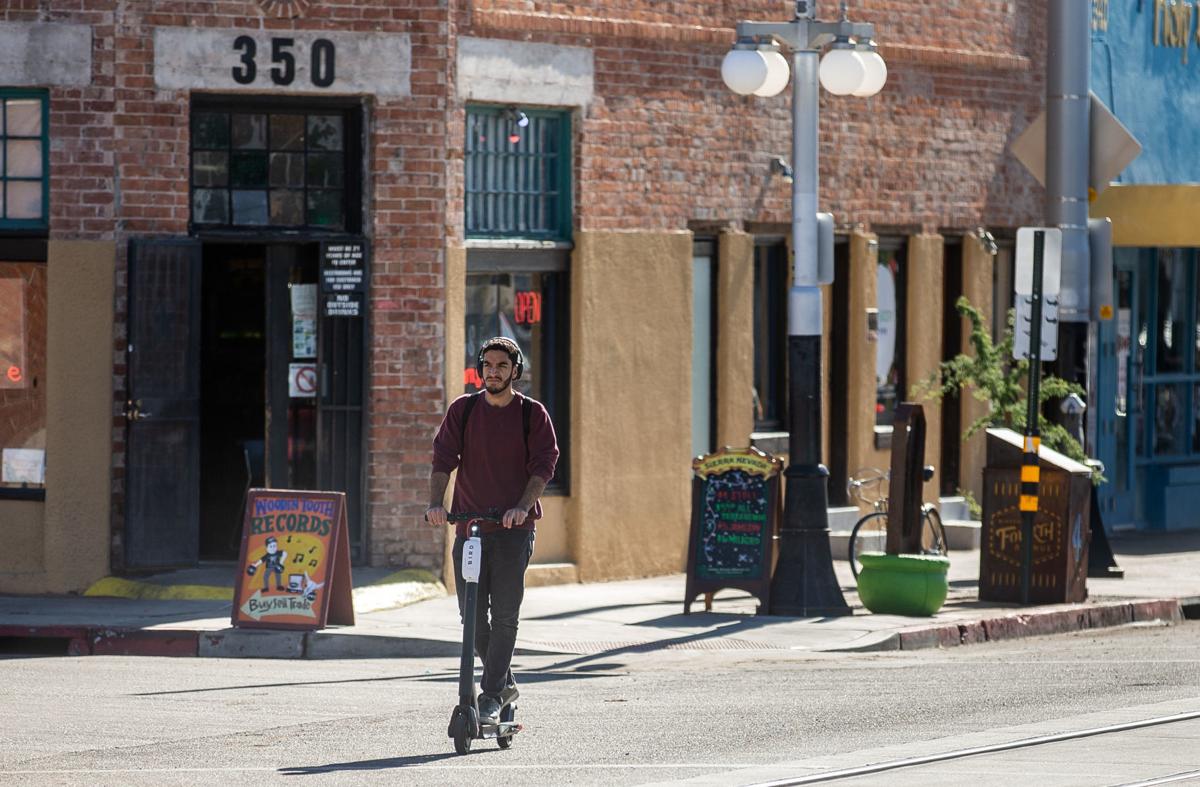 Both companies plan to make their scooters undrivable in the area of next week’s street fair. 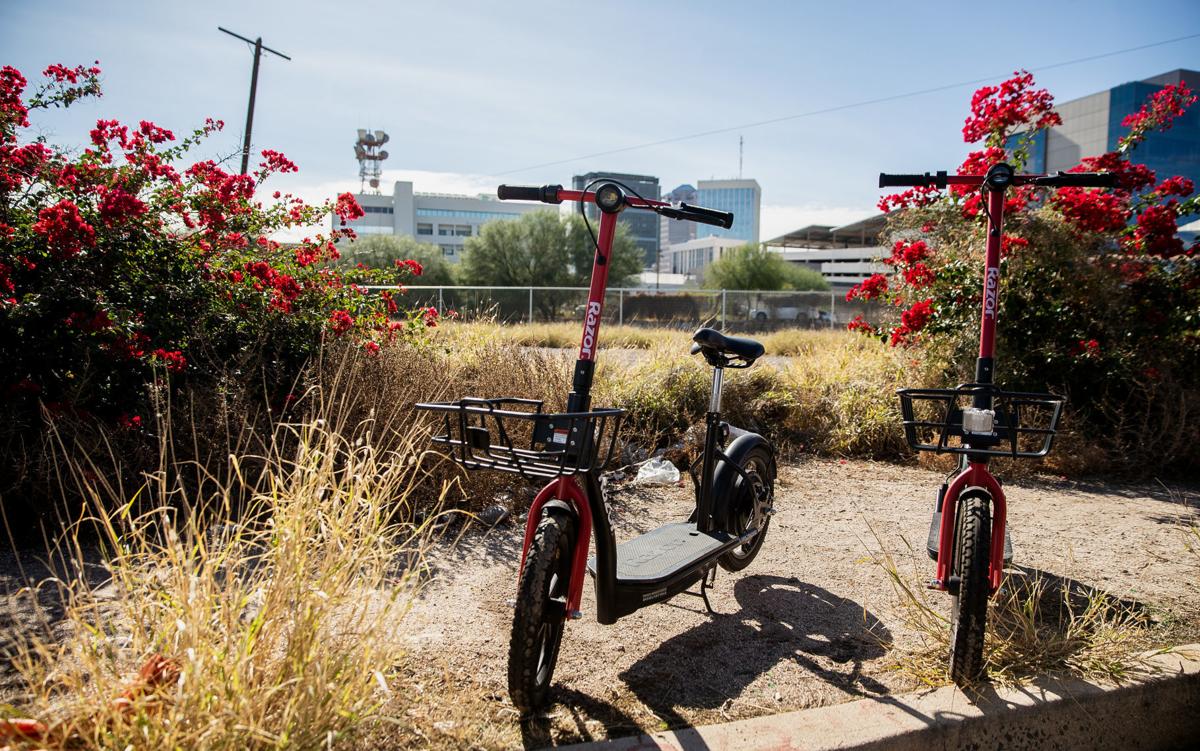 The two e-scooter companies operating in Tucson, Razor and Bird, as well as the Tucson Department of Transportation were put on notice by the City Council on Tuesday to solve issues reported by neighborhoods.

In the two months since the September launch of the e-scooter pilot program in the city, the two companies report that Tucsonans have embraced the new mobility options. Bird has amassed 56,000 rides and 15,000 unique riders while Razor has seen 66,000 rides and 14,600 unique riders since each company deployed more than 400 scooters on Tucson streets.

But several neighborhood groups, including the North Fourth Avenue Merchants Association and the Iron Horse Neighborhood and West University Neighborhood associations, have reported unsafe and improper use of the scooters in their areas.

They cited lack of enforcement, including scooters blocking sidewalks, alleys and pedestrian paths.

“Many of these concerns would be addressed if rules were being enforced by the vendors and the city,” said a letter to the city from Judy Sensibar, president of the West University Neighborhood Association.

Erika Mitnik, Iron Horse Neighborhood Association chair, wrote: “Although these scooters are promoted as a sustainable convenience, within our neighborhood they have amounted to little more than ‘corporate litter’ and a hazard to pedestrian and vehicle safety.”

The e-scooter program, as it exists, “is a hazard and a burden to downtown neighborhood residents,” Mitnik wrote.

They reported incidents to their councilman, Steve Kozachik, who represents Ward 6.

“After a gradual rollout, the scooters now constitute a daily condition that goes way beyond what can be considered a nuisance,” Kozachik said. “They’re unsafe the way they’re being ridden, they’re clutter the way they’re being parked. It is 100% unfair for residents and for business owners to be the ones who are dealing with enforcement.”

The six-month pilot program can be scrapped at any time, but Kozachik’s motion Tuesday to kill the program was not backed by any other members.

Instead, the two scooter companies and the transportation department now have 30 days to come up with a game plan to solve the issues reported in Tucson.

“Let’s not all of a sudden cut a program that has opened a door for people to get around. There’s still stuff that we can do,” said Councilman Paul Cunningham.

The companies plan to make their e-scooters undrivable in the area of next week’s Fourth Avenue Street Fair, which is expected to bring out 600,000 people during the three-day event, according to the event website.

The next month will be important to the pilot program’s survival. The companies need to address three key areas discussed by the City Council in a study session Tuesday.

“I absolutely understand the concerns about safety on our streets for e-scooter riders and I feel the same with neighborhood saturation, but what I see as a running theme that has come out of the letters we received … is that there’s a lack of enforcement,” said Tucson Mayor Regina Romero.

It was proposed that users’ accounts could possibly be fined $10 or $20 if riders are in violation of e-scooter policy.

Council members called for increased enforcement, which is handled by the two companies.

A suggestion to have Tucson Police Department enforce improper use was turned down.

Council members also mentioned the launch of Bird’s new promotion for helmet use, which includes riders taking a selfie with a helmet on to receive a coupon. It was proposed that the promotion could be extended to having users take a photo of properly parked scooters to increase compliance.

There was discussion of having parking in the North Fourth Avenue area, for instance, be marked with yellow paint to designate proper places for e-scooter riders to park and end their rides.

Romero questioned how riders are being educated about best practices on using the vehicles. “Obviously there is a lot of misinformation and people doing illegal activities as Councilman Kozachik has said,” Romero said.

Council members want more community engagement, including more use of social media and commercials, and for such education to be available in several languages.

Nearly 37,000 trips have been taken on the e-scooters in the first month since the pilot program launched, according to the city's transportation department

Road Runner: What to know about electric scooters hitting Tucson streets this week

The scooters will be available to people 18 years or older who have a valid driver’s license, but there are limits to where than can go.

Edward Celaya: What does Tucson gain from e-scooters? Control, money – and headaches, literally

Tucson moves closer to having up to 1,500 e-scooter rentals on city streets

Electric scooter companies Razor and Bird are coming to Tucson later this year.

The Tucson City Council officially signed Resolution No. 22984 on March 19 to find out if electronic scooters have a place here.

Several Tucson neighborhood groups have reported unsafe use of e-scooters in their areas, including scooters blocking sidewalks.

Both companies plan to make their scooters undrivable in the area of next week’s street fair.